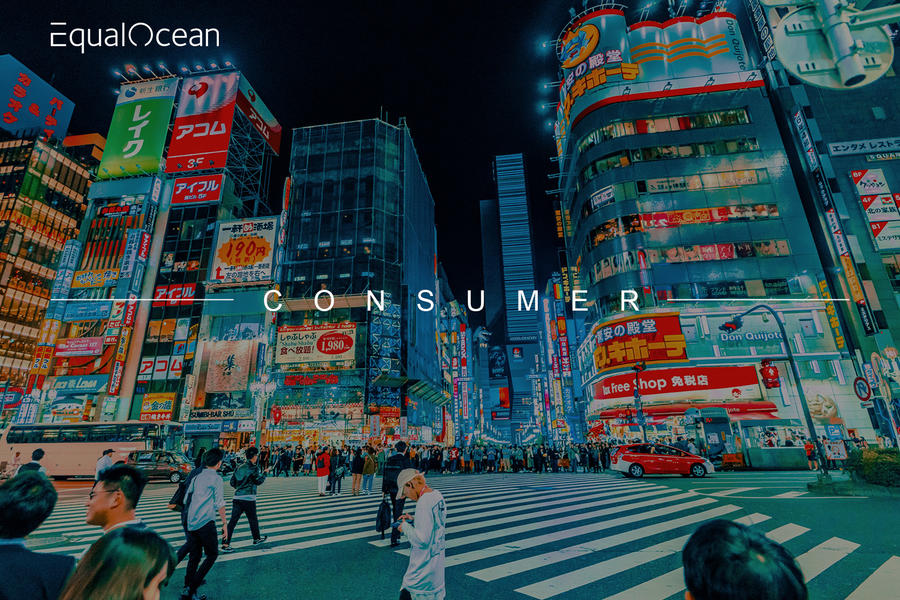 For new consumption, we at EqualOcean have identified 20 companies worth watching in Q3. The core criterion is to receive venture capital investments of over USD 30 million on average or the equivalent value in CNY in a single round. When compiling the list, we also considered factors such as growth prospects, brand influences and reputation, as well as planned expansions.

SBT (Chinese: 骄成机电) founded in 2007 and headquartered in Shanghai, China, is a developer of ultrasonic industrial equipment. On September 27, it announced the completion of an IPO round of over CNY 1.459 billion in financing. This round of financing is a public offering that will provide SBT with a boost to continue to support the rapid expansion of production capacity in the domestic lithium industry and to cut into new applications such as IGBT packaging, high-voltage wire harness welding, ultrasonic cleaning and ultrasonic medical.

Founded in 1998, Wu Fang Zhai (Chinese：五芳斋) is mainly engaged in the research and development, production and sales of glutinous rice food products. Its production techniques were included in the third batch of the national intangible cultural heritage list by the Chinese Ministry of Culture in 2011. The company went public on August 31, raising CNY 874 million.

Wufangzhai will continue to uphold the values of "harmony, integrity, excellence and innovation", take "guarding and innovating Chinese cuisine" as its mission, and strive to develop into a leading brand of Chinese seasonal food with glutinous rice food as its core.

Ziyan foods (Chinese: 紫燕食品) was founded in 2000, originated in Sichuan, developed in Jiangsu, and is now headquartered in Shanghai. It is famous for its products such as sliced beef and ox tongue in chili sauce, whole poultry products, spicy snacks. Ziyan foods raised about CNY 636 million through this IPO, which will be used for food production base, storage base, R&D and testing center, brand promotion, etc. Ziyan food is the fourth listed cooked food company in China.

Founded in 2015, Xueji Fried Food (Chinese: 薛记炒货) announced on September 15 the completion of a CNY 600 million Series A financing round from Long-Z and Genbridge Capital. This round of financing funds is expected to be used mainly for store expansion, factory construction and digital investment. Xueji's goods such as chestnuts, milk dates, yogurt citrus slices and other netflix single product get the attention of consumers. By the end of August this year, Xueji Fried Food had opened more than 600 stores. It is committed to becoming the number one chain brand of experiential casual food. In the next five years, the company plans to open 4,000 nut stir-fry chain stores nationwide.

Founded in 2014, Suhuishou (Chinese: 速回收) is a cell phone digital recycling platform company. In late August, it announced that it had received a strategic investment of CNY 500 million from Defining the Future. According to the agreement, Defininf the Future will invest CNY 500 million in 3 years to help Suhuishou to enhance its brand popularity, profitability and market share by strengthening its nationwide publicity.

Founded in 2013, Miniso (Chinese: 名创优品) is a leading manufacturer of home furnishings, electronic appliances, textiles, bags and accessories, beauty tools, toys, color cosmetics, skin care and toiletries, snack foods, perfumes and fragrances, stationery and gifts, etc. On July 13, Miniso was listed on the Hong Kong Stock Exchange, raising US D 72.72 million. As of December 31, 2021, Miniso has entered about 100 countries and regions worldwide and opened more than 5,000 stores , including more than 3,100 in China and more than 1,900 overseas.

Yuanfei Pet (Chinese: 源飞宠物) was founded in 2004 and was officially listed on the Shenzhen Stock Exchange on August 18, 2022, raising CNY 468 million and about to start a new journey. The company's mission is to "care for pets and create beauty", and has been committed to providing high-quality, healthier pet supplies and food that help improve the quality of life of people and pets, in order to meet consumers' aspirations for a better life.

Founded in 1996, Zhengte (Chinese: 正特股份) is a high-tech enterprise that integrates the research and development, production and sales of outdoor leisure furniture and supplies. The company has two series of products: shade products and outdoor leisure furniture, and was successfully listed on September 19, raising CNY 441 million. Zhengte expects revenue for the first nine months of 2022 to be CNY 1.122 billion to CNY 1.182 billion, an increase of 15.53% to 21.70% over the same period last year.

Founded in 2001, Bolex Food (Chinese: 宝立食品) is a company that has been deeply involved in the field of compound seasoning for many years and is committed to providing high-quality and comprehensive flavor and product solutions for restaurants, food industry companies and home consumers. The company was listed on the SSE on July 15, issuing 40.01 million shares at an issue price of CNY 10.05, raising total proceeds of CNY 400 million.

Yangufang (Chinese: 燕谷坊) was born in Inner Mongolia in 2014, taking the whole grain industry as a grip, using digital health and telehealth advanced technology to realize the digitization of the whole grain health industry. EF HUTTON, division of Benchmark Investments, LLC are the underwriters. The company primarily manufactures, develops and sells oats and cereal products through its own sales force and distribution network. 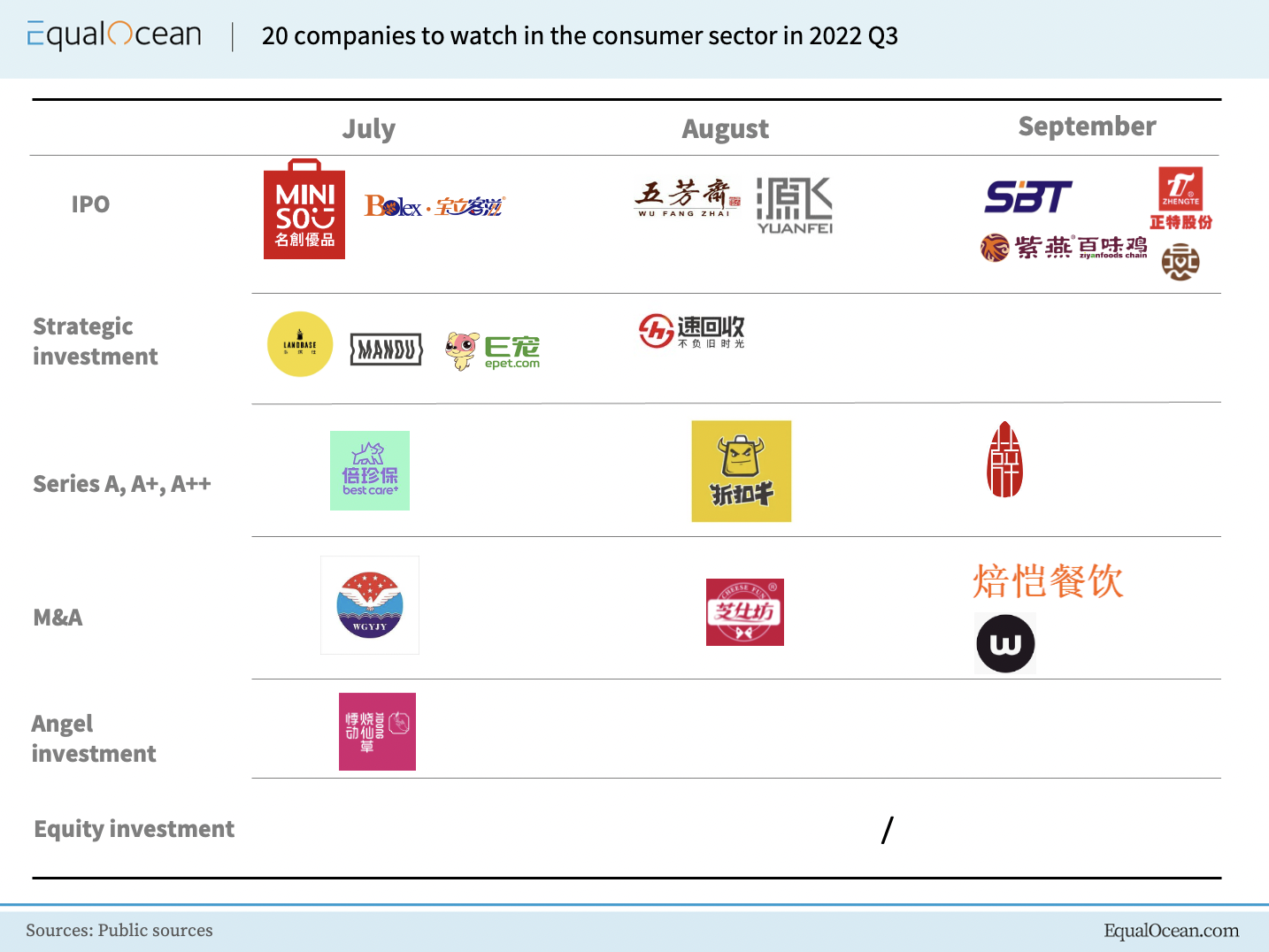 Founded in 2016 and headquartered in Shanghai, China, Bakelite Catering (Chinese: 焙恺餐饮) is a bakery brand store operator; it completed a strategic merger with its general agent in China, Shanghai Shengnong, for CNY 200 million on September 23. The ZAKUZAKU, RAPL and BAKE CHEESE TART brands formerly under Bakelite Catering will belong to Shengnong as of September 1, 2022.

Founded in 2001, Wugongyan Wine (Chinese: 吴公岩酒业) is a large private enterprise that produces, researches and sells a series of branded spirits with a production capacity of 1,000 tons. The strategic acquisition and holding of Wugongyan Wine by the Guizhou Jiangjiu Group was made on July 15 for CNY 200 million. Developing for more than 20 years, Wugongyan Wine has also won the recognition of the market and the industry with its solid quality and standardized corporate management.

Founded in 2003, Wagas (Chinese: 沃歌斯) is a Western restaurant chain from Shanghai. Since its inception, Wagas has evolved from a café into a light and simple food chain, selling products such as salads, pasta, sandwiches, juices and coffee. On September 20, Anhong Capital, a private equity fund, announced that it had acquired a 60% stake in Wagas for CNY 200 million.

Founded in 2016, Junjuncheese (Chinese：君君乳酪) mainly focused on light cream, butter, cheese and other products. It has also provided cheese OEM business for more than 60 brands across the country. In early August, BEL acquired 70% stake in Junjuncheese with a capital contribution of CNY 200 million.

Founded in 2007, Jidong (Chinese: 悸动烧仙草) focuses on beverages and desserts with grass jelly as the core, and is committed to providing consumers with related tea and beverage products and services. After 15 years of rapid development, there are now more than 3,000 stores nationwide. At the end of July, it received strategic financing of tens of millions of dollars. This round of financing funds will focus on franchisee opening support to enhance the profitability of single stores, while deepening the supply chain, building brand core barriers, providing consumers with fresh and healthy quality ingredients, and continuing to meet the pursuit of fresh, healthy and delicious tea drinks for consumers everywhere.

Established in 2018 CHOCDAY (Chinese: 每日黑巧) is a brand of LANDBASE, and completed two consecutive rounds of over 100 million yuan scale financing in the second quarter of 2022. The financing was led by RealPower Capital, co-invested by JP Capital and ChuangXiangHuanJu Investment, with old shareholders 5Y Capital and V Star Capital continuing to pursue the investment. In the future, CHOCDAY aims to be a global chocolate and casual food brand.

Founded in 2018, Mandu (Chinese: 蔓珠) is a manufacturer of laundry products, including laundry gel beads, anti-stringing tablets, dishwasher safe dishwashing blocks, washing machine sink cleaning, and refrigerator deodorizer. It received a strategic investment of hundreds of millions of RMB in mid-July from Copartner. In the next four years, the brand will rely on Copartner's platform to realize the offline and online linkage and advertising diversion to help promote the brand and accelerate the cultivation of consumer mind, and eventually become the first brand in the category of household cleaning products.

Founded in 2008, EPT (Chinese：易宠科技) is a group of companies that provides omnichannel management services for pet brands. In mid-July, the company announced the completion of a strategic financing of hundreds of millions of dollars from RingPu Bio, a leading company in the animal health products industry. The financing will be mainly used to build the self-research brand, upgrade the supply chain and expand the front office business offline.

Founded in July 2019, Best care (Chinese: 倍珍保) is a pet medicine and health brand targeting first- and second-tier urban people who treat their pets as family members. Within six months, it completed two consecutive rounds of financing, Pre-A round and Pre-A+ round, from Huishanqi Venture Capital and listed company RYC, with continued injection from old shareholders Qingsong Fund and Shangcheng Investment, for a total amount of tens of millions of yuan. The funds raised in the two rounds will be mainly used for new product development and channel expansion.

Community hard discount supermarket chain Discount Bull was established in 2019, focusing on the community retail scene. It has now launched two store types: 24-hour hard discount supermarket, community member fresh store. In late August, the company completed a USD 10 million Series A+ financing round led by XVC and followed by Sequoia and Zhen Fund. It is reported that this round of financing funds will be used for supply chain construction, independent system development and store expansion, etc.