… which is minuscule, compared to 2018’s 57% and 2019’s 43%. However, the recent increase in memberships and the proposed cost reduction are bright spots. 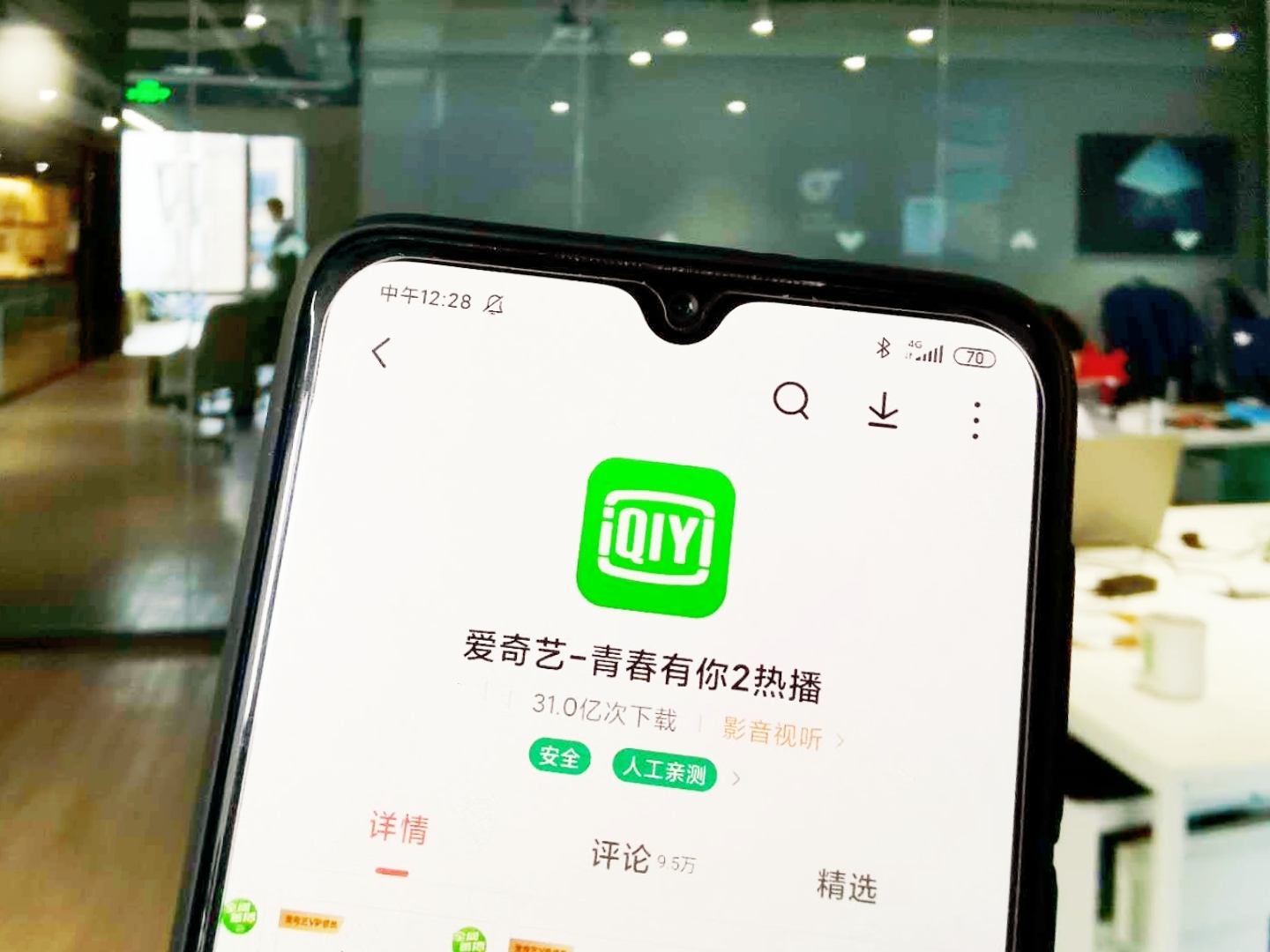 ► “We delivered solid results during the first quarter despite the very challenging environment caused by the COVID-19 outbreak,” said Gong Yu, the founder and CEO of iQIYI.
► After ten years of operation, the company is yet to break even.

On May 19, iQIYI (IQ:NASDAQ), a Chinese online entertainment service provider, announced its unaudited financial results for the first quarter of 2020. As always, there is some good news and bad news.

Talking about the latter, the report indicates a revenue of around USD 1.1 billion, indicating a 9% increase. The operating loss was nearly USD 316 million, keeping the net loss margin relatively stable year-on-year – at 29%. The company’s membership service revenue, online advertising revenue and content distribution revenue achieved increases of 35%, 27% and 29% respectively. The growth rates of these revenue channels are not as sharp as the ones of the last two years, casting doubts on its revenue sustainability. 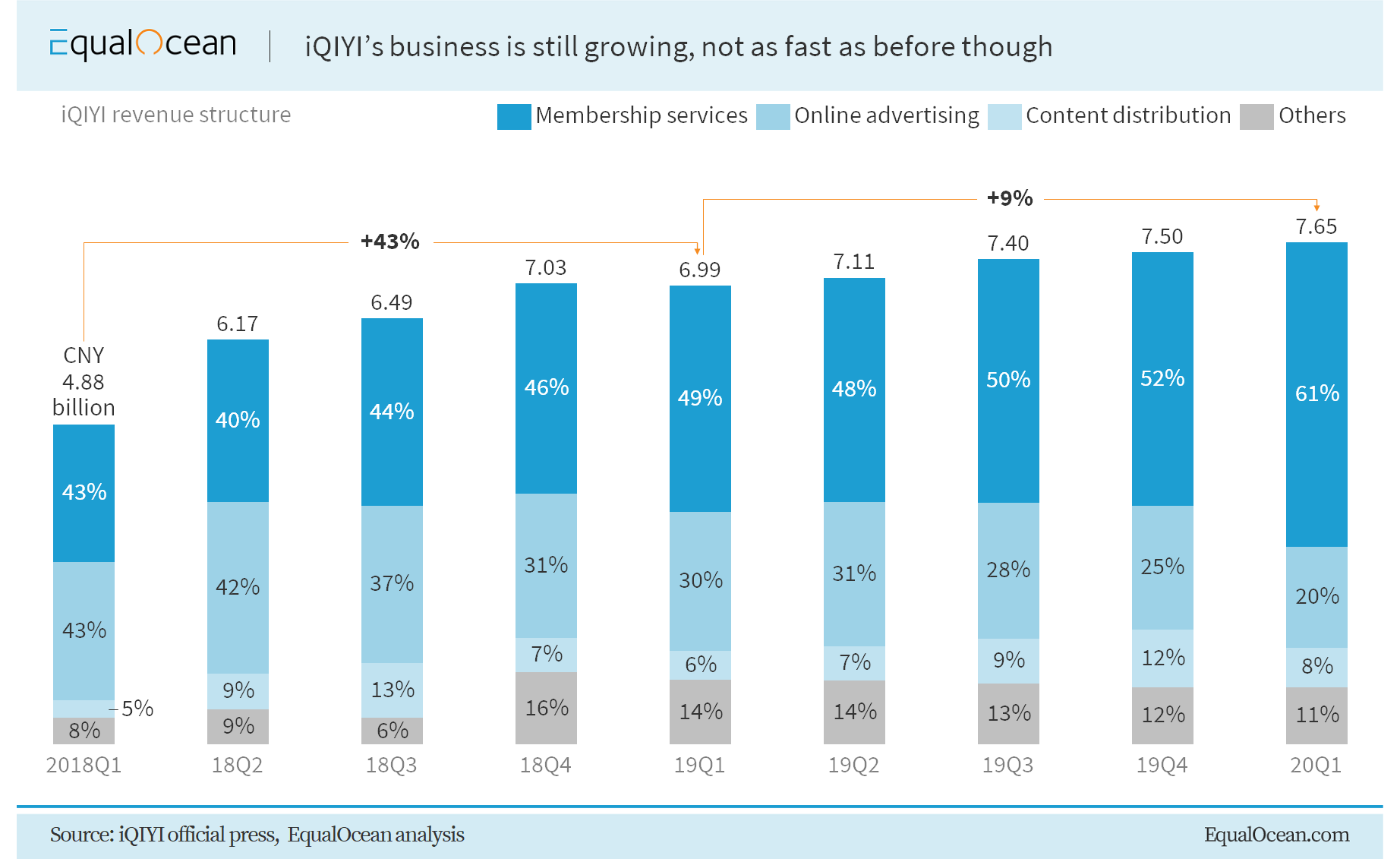 As for the former, there are more users who are willing to pay for iQIYI products. The number of subscriptions rose by 23% year-on-year, reaching 119 million as of March 31. The paying users are crucial for the long-term development of the company, which we further analyze in the following parts.

iQIYI closed trading on Nasdaq with the price falling 3.66% on May 19, the first day after the announcement. While the firm's short-term market performance is hard to predict, both bulls and bears have their reasons. Below is an overview of those.

Lockdowns are good… for online entertainment

The first quarter of the new decade has come under the shadow of the COVID-19 epidemic worldwide. As numerous industries come to a standstill while the consumption shrinks, the IMF adjusted the expected global GDP growth to -3%.

Amid the crisis, many online entertainment companies have benefited from the lockdowns worldwide. iQIYI, arguably, was one of them, seeing its gains increase. Affected by the spread of COVID-19 and quarantine policies, after the 2020 Spring Festival holiday the number of online video industry users increased by 17.40% from normal, and the daily average active user growth of mobile video platforms increased from 16% before the holiday to 36%, according to Quest Mobile database.

With the whole of society fighting against the epidemic, it will likely eventually disappear. Thus, in the following parts we would like to discuss iQIYI’s long term key growth drivers and challenges.

The first force driving its revenues up was like iQIYI’s slogan, ‘Always Fun Always Fine’ (悦享品质), indicating a continuous upgrade in quality of the content. iQIYI grabbed the opportunity to launch a bunch of trendy TV series, like the idol producing program ‘Youth with You 2,’ which ranks the first in first quarter with 510 million effective views. The outstanding content production can also be found in its long video series, ‘Detective Chinatown’ and ‘Winter Begonia,’ which are exclusively broadcast by iQIYI. Both brought it leading positions in terms of aggregated views and boosted the hype around the service provider.

The subscribing members and subscription service design also contribute as key drivers for the future profitability and market expansion. 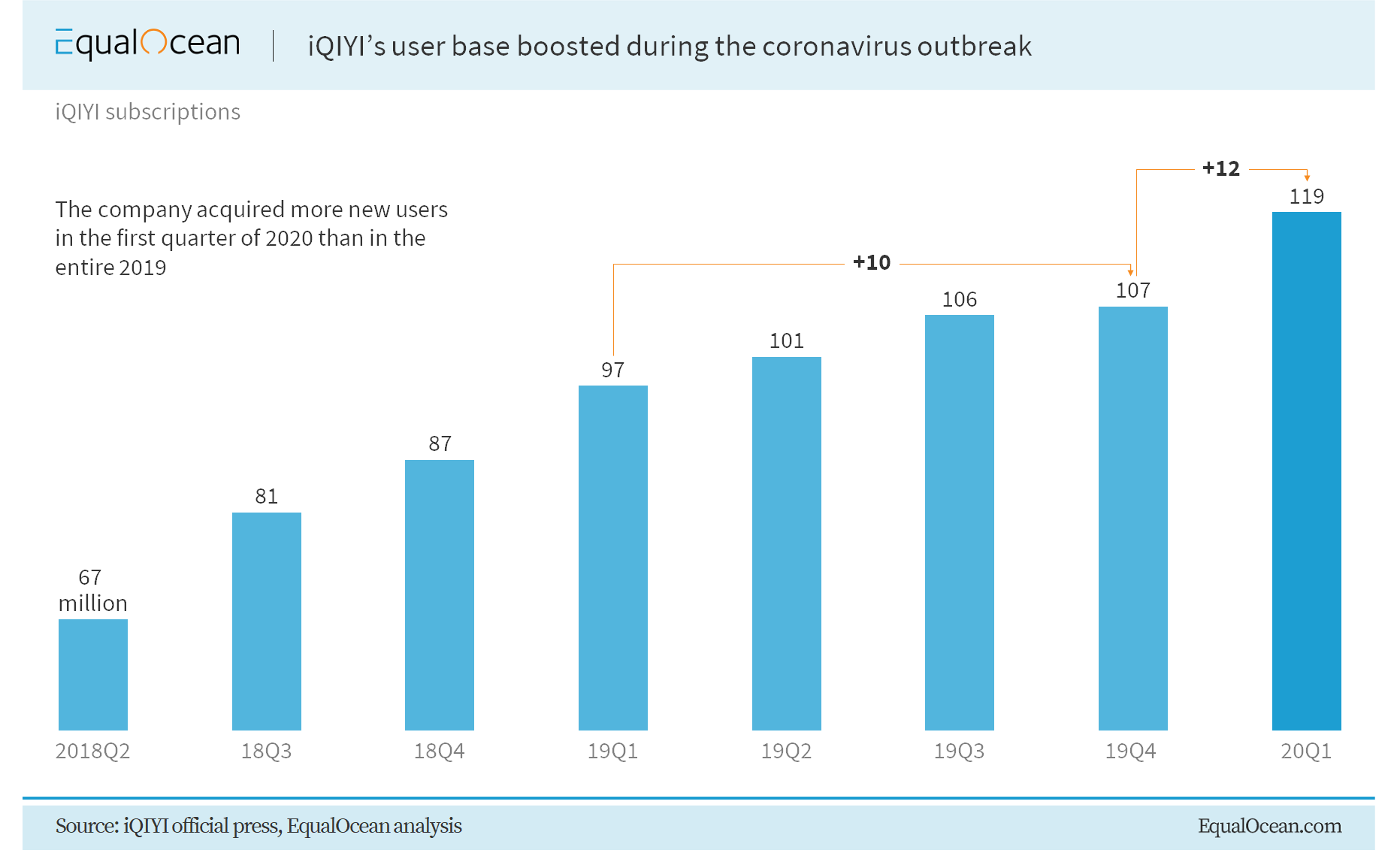 In addition to the growth in numbers, the founder of iQIYI, Gong Yu, announced in the investor conference that a new type of membership called ‘S-diamond Membership’ will be in service soon and the exclusive rights of the ‘S-diamond’ members will include earlier access to series and programs. There will be one membership account for multiple devices and membership services of other iQIYI business sectors like literature, VR and sports. With diversified membership service design, the retention rate of users could be raised while a rather wider spread of subscription memberships can be expected.

Cost reduction through cutting off actor payment, namely setting a CNY 50 million ceiling, was also addressed by Mr. Gong in the conference. Previous payment for some famous actors can reach CNY 150 million – thus around 60% of production cost can be saved for further investment or capital accumulation.

It is worth mentioning that the quantity of subscription members of iQIYI in the first quarter surpassed that of its biggest competitor in China’s video platform market, Tencent Video, by 5 million, or 4.20% of the Beijing-based company’s entire user pool. If the growth trend can be maintained or even driven further by the soon-arriving ‘S-diamond’ strategy, the future revenue can be expected to go up.

iQIYI’s ambition is not limited to China’s domestic market and it is starting to go international from Southeast Asia and Youtube placement. ‘Youth with You 2’ was broadcast simultaneously on the international edition of iQIYI, with subtitles in eight languages including Chinese, English, Thai, Indonesian, Vietnamese, Malay, Spanish and Korean. For this program, iQIYI also started the postproduction and overall translation of Chinese, English and Thai for the first time. 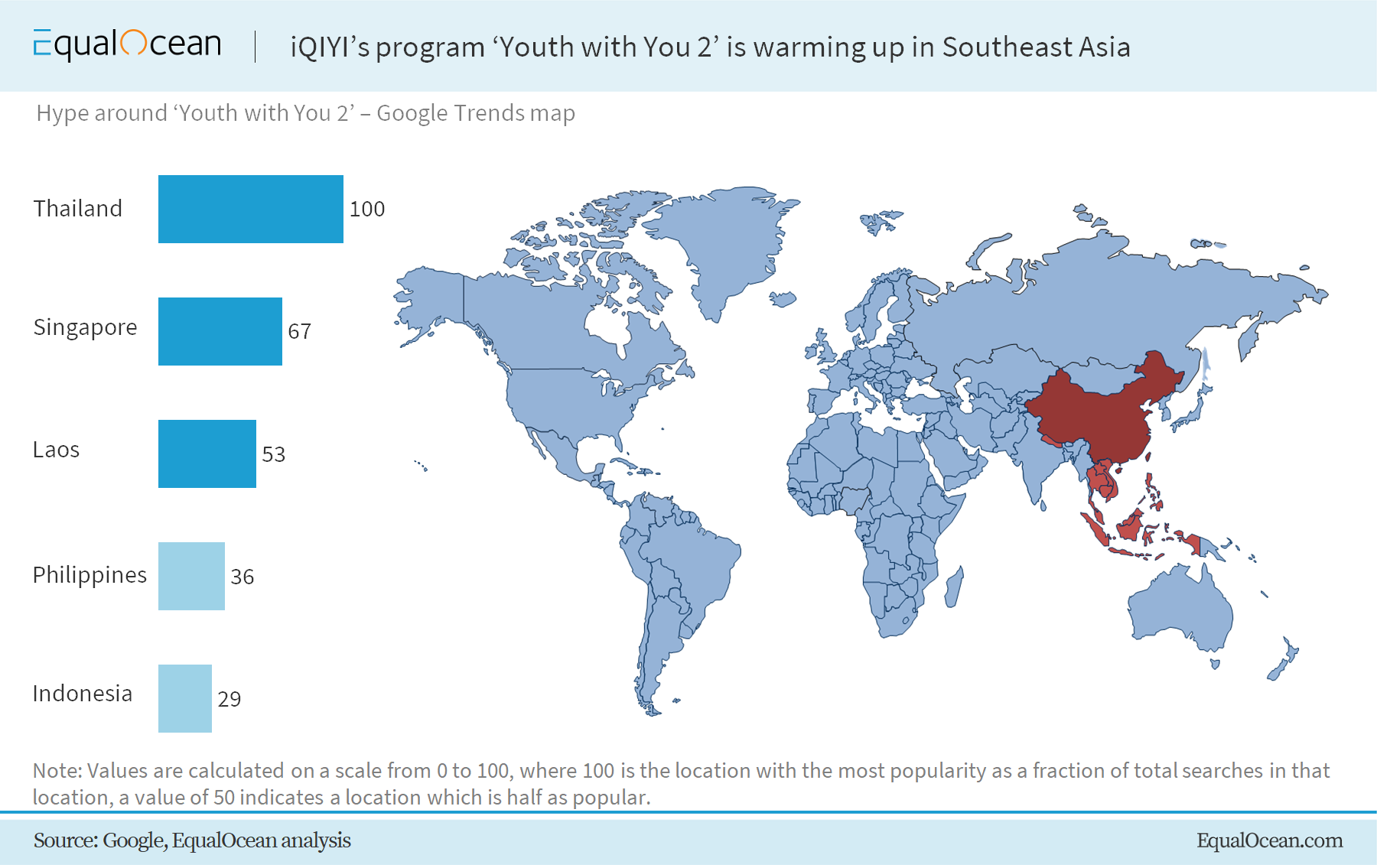 iQIYI has the advantage in both content production and technologies related with video presenting in Southeast Asia. Once the market is taken by iQIYI, a considerable revenue has an opportunity to be witnessed. Apart from the revenue and other financial factors, iQIYI’s international attempt is an effective way for China’s cultural exports and iQIYI’s talent acquisition, which are both key to long-term value creation.

Though there are several seemingly promising strategies proposed by the company, challenges regarding user growth, continuous downslope in advertising revenue, profitability, subscription member segmentation and the harsh competition are all there to consider.

Gains from advertising, its second-largest revenue stream, also went down in this quarter. The macroeconomic turbulence caused by the coronavirus outbreak undermined the advertising industry. However, there is nothing new for iQIYI: the company has been receiving negative feedback about its low-quality ads for a long while.

Meanwhile, as shown above, there has been a slowdown in iQIYI’s subscription growth for consecutive quarters. As the company has been aligning with aggressive business expansion and innovation, especially for the recent quarters, the growth rate does not give a positive feedback for all its striving. The heated competition with Tencent Video and Youku can be a reason for the slowdown, but more alarming reasons could be the piracy problem and mispositioning in pricing.

As it is going abroad, along with its business model, iQIYI should count Netflix as its competitor as well. Though being the so-called China’s Netflix, the gap is hard to fill in short term. First Netflix’s paying users exceed those of iQIYI by 40 million and the market value of Netflix stock is around 150 times iQIYI’s. As for content production, Netflix series hold an advantage position in both number and quality. In some respects, the two companies’ business capacity is somewhat reflected by their market performance. 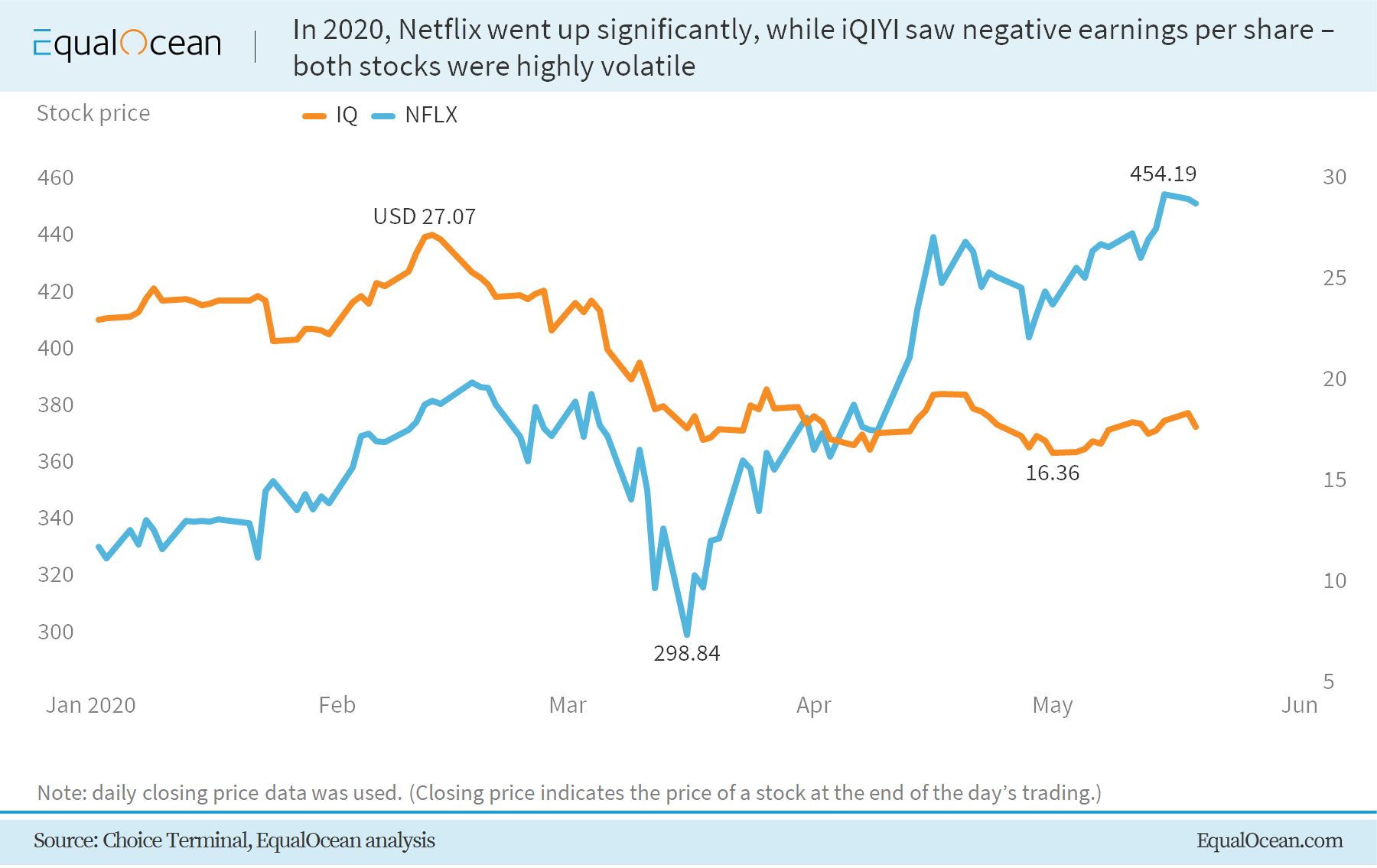