Fan economy has features of the diversity of subjects, versatility of business models and cross-field. Various brands use fan economies to achieve economic and social benefits through emotional and symbolic links with fans. 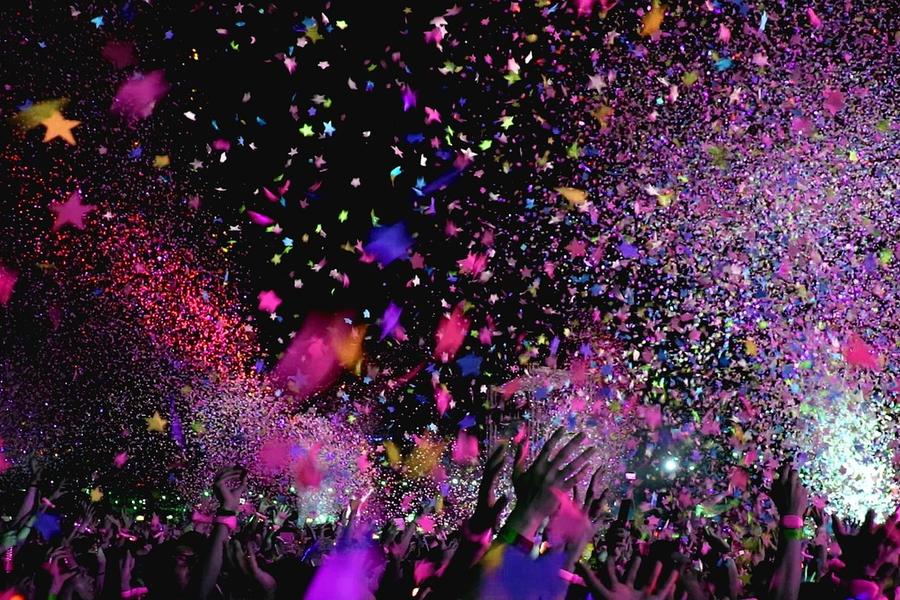 What is fan economy?

Fan economy is a business model that generates income based on the relationship between fans and admirers, which is a mode of business operation that enhances the stickiness of users and obtains economic and social benefits in the form of reputation marketing. Specifically, spontaneous attention, sharing and continuous dissemination of idols' behavior and their works by fan groups will bring about commercial communication influence, and fan consumers' direct or indirect purchase behavior around idols will generate huge economic benefits. The Chinese fan economy is currently mainly gathered in the field of idols and artists. In recent years, the fan economy of internet celebrities is also gradually developing.

Traditionally, most celebrities are stars, actors and industry celebrities, and the forms of fan economy include purchasing singers' albums, concert tickets, and merchandise with the same items or endorsement by the stars. Now, the development of the internet has broken through the boundaries of time and space, and fan economy has been applied in many fields, such as cultural entertainment, sales of goods and customized services. With the help of relevant platforms, merchants can provide diversified and personalized goods and services to fans through a circle of fans gathered at a certain point of interest, eventually transforming them into consumption and realizing profits.

The core of the fan economy is the fans, and any link in the industry chain is based on the economic activities of the target group of fans. In the production and marketing process, the relevant businesses have given more autonomy and initiative to consumers, attach importance to the positive role fans play in product sales, and make efforts to enhance the stickiness and loyalty of fans to products as the operation goal. 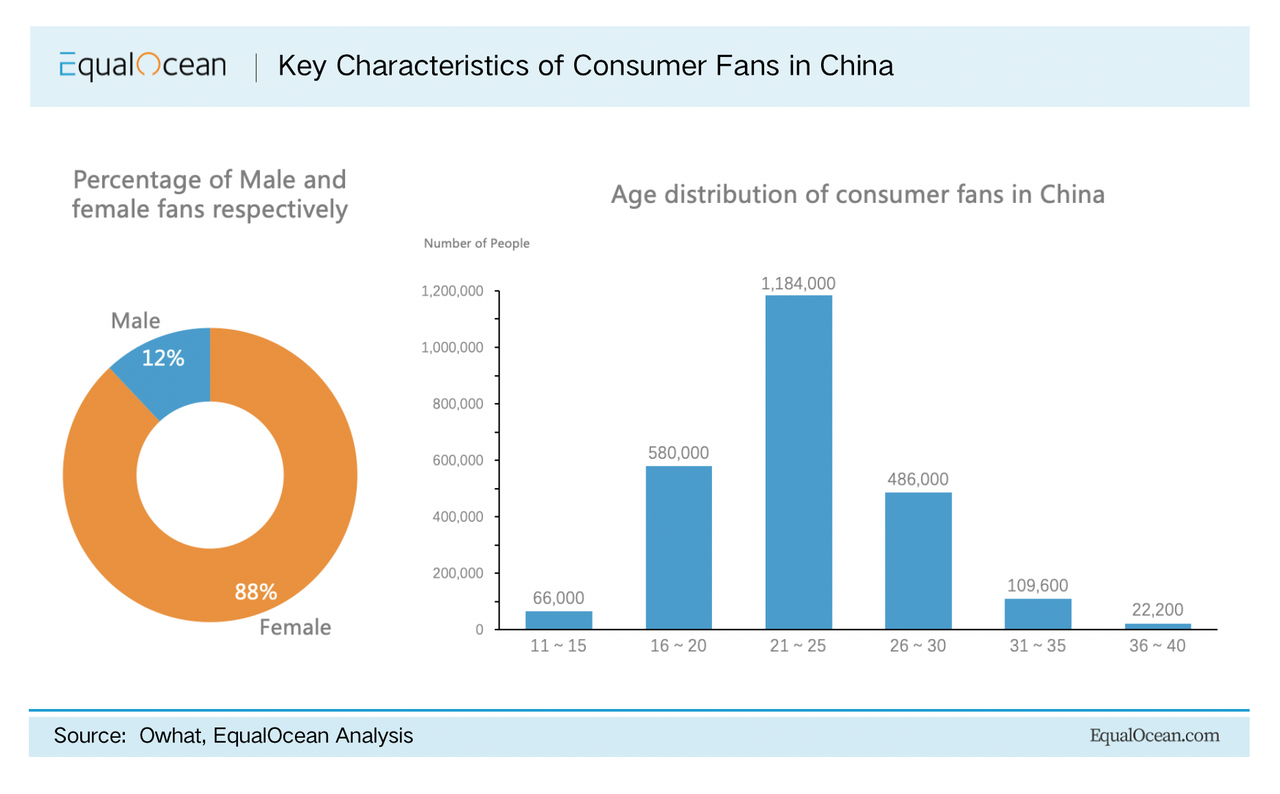 In the Internet-mediated production system, the role of fans constantly changing, consumers of goods, as well as disseminators and producers. Compared to the traditional economic style, the fan economy deepens the autonomy and dynamism of consumers in economic activities.

According to the data, the market size of China's fan economy-related industry has reached CNY 4,942 billion in 2021 and is expected to reach CNY 6,423 billion in 2023. 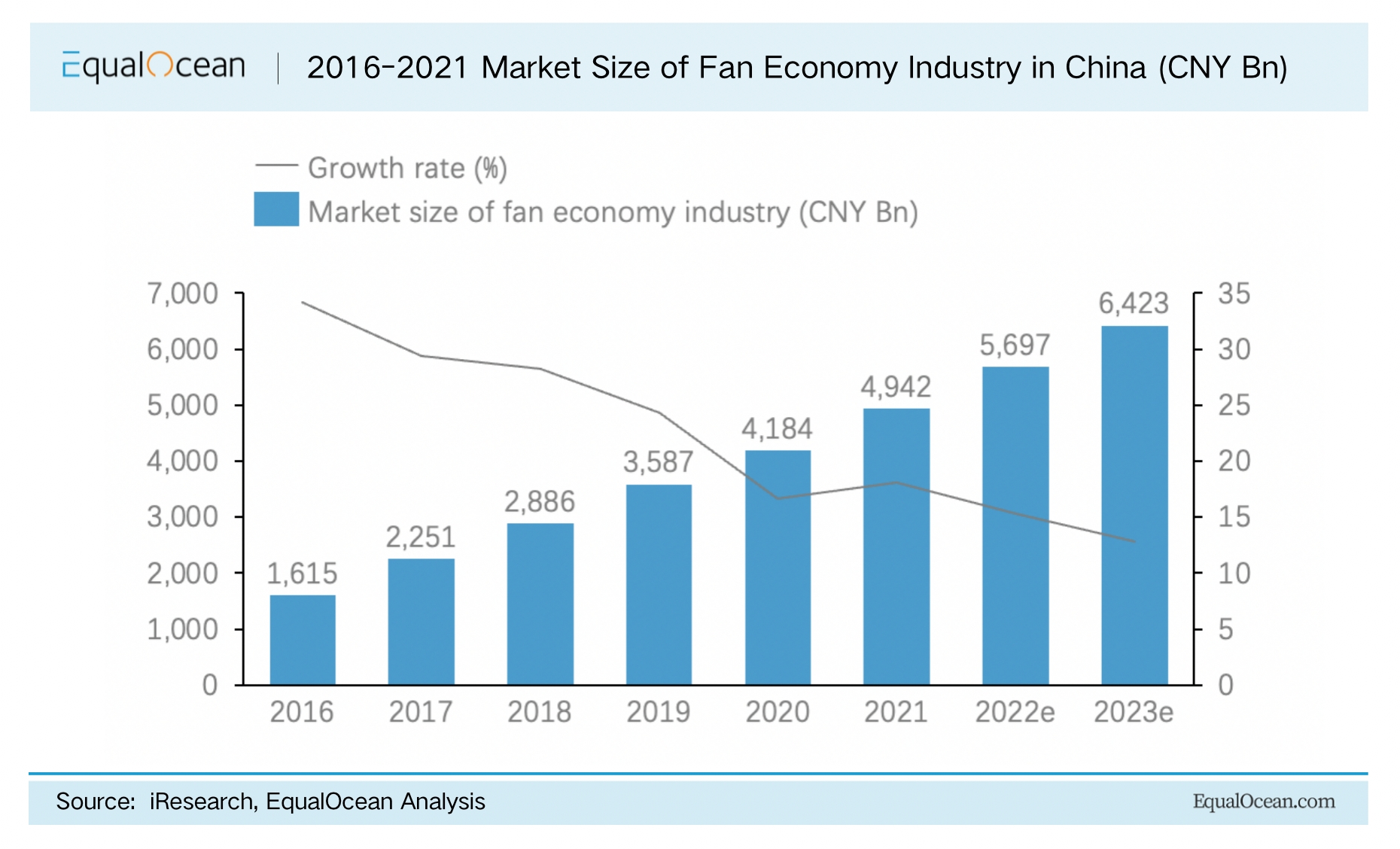 The outbreak of COVID-19 in 2020 also contributed to the fan economy. Under the influence of the epidemic, people became more dependent on the internet, and there was a significant increase in the number of hours people spent online. The increase was particularly pronounced for media with strong fan economy attributes, such as short videos, live streaming, and live games. Although the epidemic limited consumption power to some degree, it also promoted further penetration of the internet for the fan economy, providing a basis for the commercial value of the fan economy after the epidemic ended.

The deeper motivation for the development of the fan economy stems from the digital transformation of the economy.

The impact of digitalization on the fan economy stems from the shift in consumption patterns in the Internet generation. The migration of consumption scenarios from offline to online shopping has led to new challenges in market competition for products, creating new opportunities for idol endorsements to play a more significant role in marketing and market competition.

Second, idol endorsement helps companies win consumers' trust in the Internet market competition, thus playing an essential role in building product credit. The "role model" effect generated by idol endorsement can reduce the information asymmetry caused by consumers' inability to actually experience products and verify the authenticity of the information. For example, celebrities' "airport outfits" can show the "daily effect" of the products they endorse. From the perspective of consumers, the endorsement of an idol makes the product not just a simple picture of an online shopping scene, but more stereoscopic and realistic, thus stimulating expectations and imagination for the product and promoting a willingness to buy.

The support and fundraising phenomenon is mainly concentrated in the idol fan circle, and less in the field of actors and singers. Therefore, before detailing the forms of consumption, it is essential to mention the special connection between idols and fans. Idols originated in South Korea, and most of them performed in the form of male groups, female groups or bands, including singing, dancing, acting and hosting shows. With the development of the industry, idols are involved in more and more fields and forms, and in recent years there is even the concept of "virtual idols." Compared to other types of artists, fans are more critical of idols. There is a powerful emotional connection between idols and fans; to some extent, idols are the spiritual support of fans. Fans not only pay directly for the idol's work, but are also a group of support workers responsible for daily operation and promotion.

Since the support and fundraising approaches behave differently in various countries' idol markets, Chinese fan consumption targets include not only Chinese idols. Therefore, we will explain in detail from both domestic and foreign idol perspectives.

a.Foreign idol support (taking the Chinese fan base of Korean idols as an example)

Album support means that before a Korean idol releases a new physical album, domestic fan support groups will promote the idol's album sales by purchasing the album and collecting money without shipping it back. In the case of non-shipping back, fans can contribute any amount of money to buy the album, which is counted as sales, but they will not get the physical album. Thus, fans do not need to buy the entire album and save on the huge international shipping costs, spending less money to boost sales for their idols. This is purely a "love power" act.

One of the heads of the fan station of a Korean girl group said in the interview, "When we make the album purchase, due to the large purchase volume, we can negotiate the price with the album selling platform and open the album purchase link for domestic fans at the lowest possible price. In addition, the fan station will also design and produce its own related peripherals, with album links or not shipped back links bound to sell, which can also play a good effect in stimulating sales. "Because of the significant number of Chinese fans, the output of many Korean idols' album sales is huge in terms of Chinese fans' purchase volume.

Birthday support refers to fans' support activities during idols' birthdays, which generally include placing support ads on online and offline platforms, giving gifts to stars, and so on. These support activities are also normally funded by fan stations opening fundraising links, which fans voluntarily purchase. Nowadays, there are more and more creative forms of celebrity birthday support, such as doing public service in the name of the star, drone show support, and so on.

Unlike Korean idols, the Chinese idol market mainly focuses on talent shows. This form of talent show emerged early in China, such as the Super Girls in 2005. But the idol group talent show was on a boom starting with the "Idol Producer (Chinese: 偶像练习生)" broadcast in 2017, and then the explosion of the "Chuang" series.

In this kind of talent show, fan support is mainly in the form of pooling money for the ranking. The show's general rule is that each account has a fixed number of votes per day. If you want more votes, you need to get them by purchasing the show's cooperative products or opening a platform membership. For example, in the "Youth With You 2 (Chinese: 青春有你2)" talent show, ordinary accounts have only 1 vote per day, while IQIYI members will have 3 votes, which is a means for IQIYI to convert regular viewers into members.

Therefore, to increase the chances of an idol's success, it is necessary to have a large fan base and a sufficient amount of money. In order for idols to get better rankings, fan groups usually voluntarily pool their money and raise funds to buy accounts and products to vote for idols. As a result, video platforms and co-sponsors will reap huge profits. According to public data, the total amount of public capital raised by fans of "Chuang 2021 (Chinese: 创造营2021)" is over CNY 150 million. That figure is considerably unbelievable. 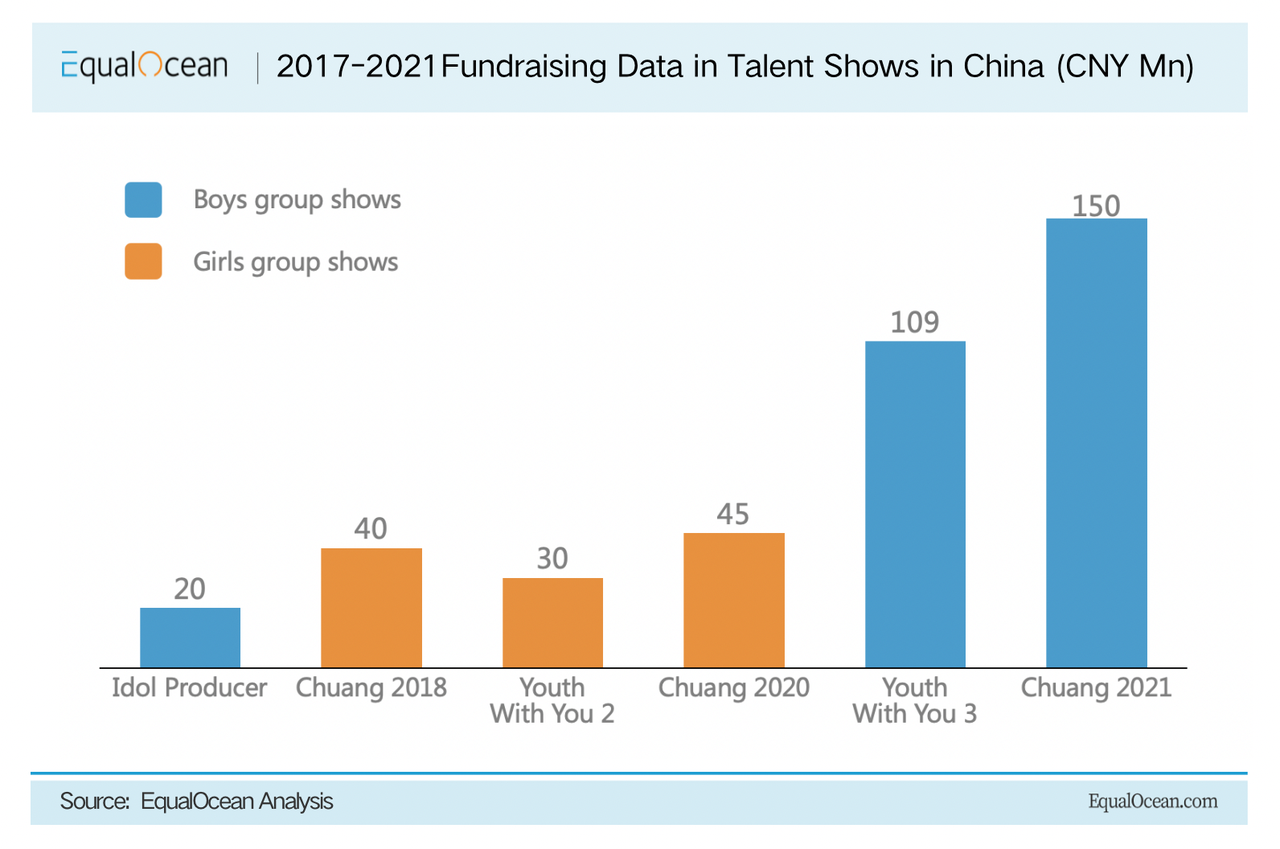 In the next article, we will continue to share with you the comparison of the fan economy in China and foreign countries, the problems of the Chinese fan economy and the measures taken by the government.