Once berated for its accounting fraud and even seen as a cautionary tale about similar ethical risks posed by Chinese Concept Stocks, Luckin is being nursed back to life following a series of overhauls. But to reclaim the top spot won’t be easy, as new players are brewing up a storm and threatening to beat the industry pioneer at their own games. Will Luckin’s dramatic story of redemption and revival this time taste just as sweet or leave a bitter taste in the mouth? 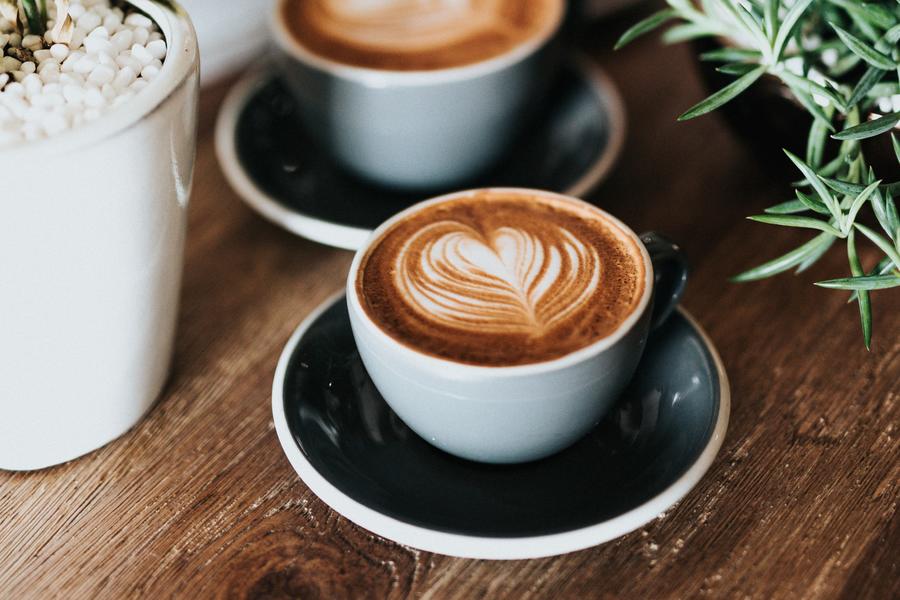 A fast-paced lifestyle, stressful work, and the convenient food delivery services have boosted white-collar workers’ demand for coffee. Along with its high frequency of consumption and addictive nature, the roasted, aromatic beans have long been seen as a good business.

Over the past decades, Chinese consumers’ perception of coffee-drinking has evolved from a new, stylish experience to a stimulant for socializing. And in 2018,  the country’s coffee consumption witnessed a tectonic shift, with a new generation of consumers ditching instant soluble coffee sachets for freshly brewed coffee of better quality – and even better, handmade coffee. This changing preference gave rise to the proliferation of small boutique coffee chains. And since then, a quality-oriented coffee market has started its upswing.

According to Euromonitor, the average coffee consumption per capita was 4.7 cups in China’s mainland in 2018, which almost doubled to 9 cups in 2021, as reported by Deloitte’s White Paper on China’s freshly brewed coffee industry. Although the figure was much less than in America, South Korea, and Japan, habitual coffee drinkers in first- and second-tier cities like Beijing, Shanghai and Shenzhen consume an average of 300 cups a year, almost on par with the level of mature markets. In other words, coffee is no longer just trendy — it’s a part of the daily routine.

In fact, China's coffee market has been undergoing significant growth in recent years. The industry was worth USD 60 billion (CNY 381.7 billion) in 2021 according to a iiMedia Research, with an estimated 27.2% yearly increase. In 2025, the market size is expected to exceed CNY 1,000 billion. 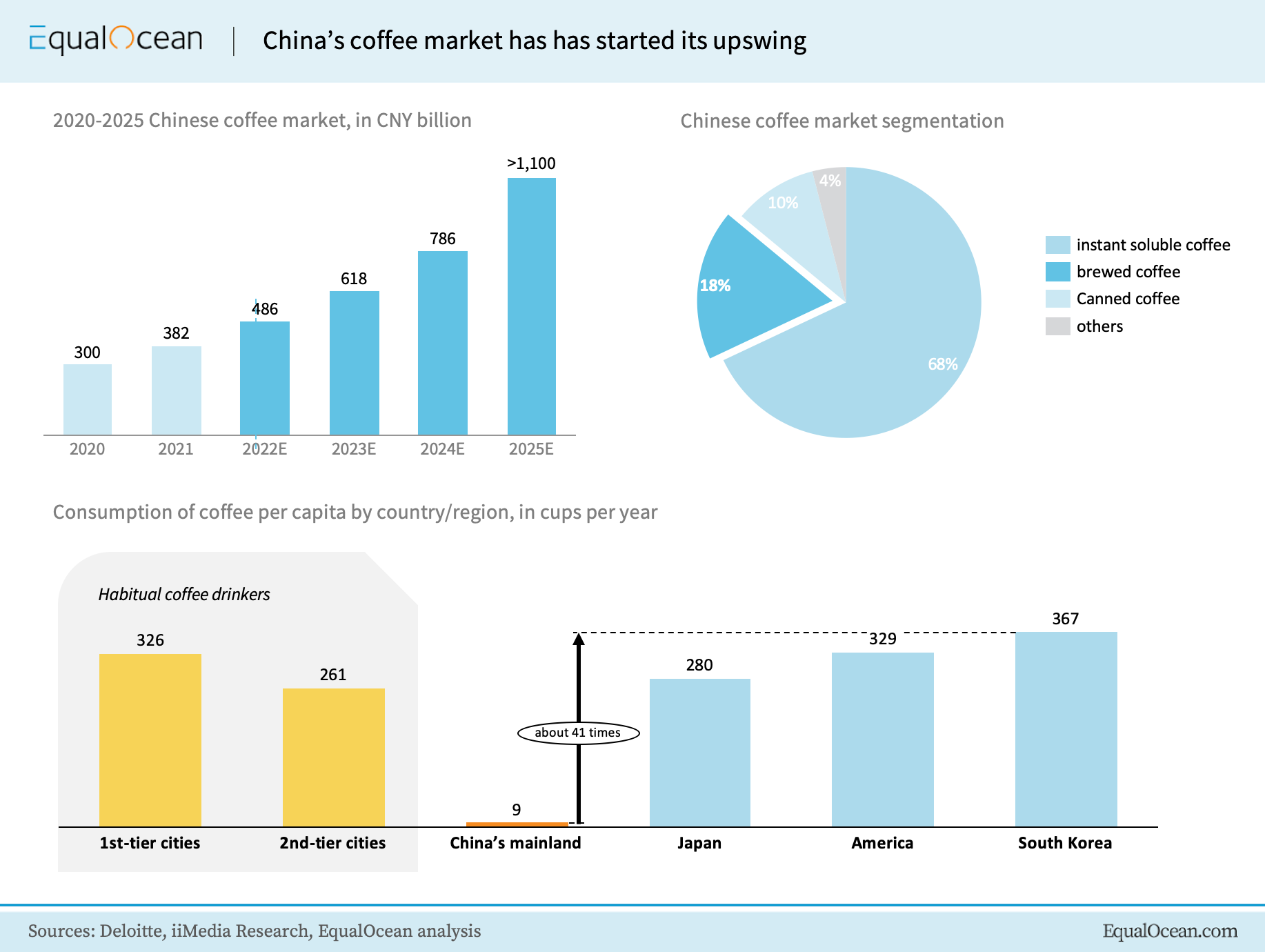 Luckin Coffee: back on track

In 2020, a damning 80-page report released by short-seller Muddy Waters Research plunged Luckin, the self-styled Chinese challenger of Starbucks, into the maelstrom of an accounting fraud only nine months after its IPO on NASDAQ. In May 2020, Luckin received a delisting notice from the SEC and stopped stock transactions from June 29 of the same year. Two months later, Luckin officially confessed that it inflated the 2019 sales by CNY 2.20 billion (USD 309 million). This scandal sparked widespread concerns, sending its stock price tumbling all the way to USD 4.82 on the last day of trading on NASDAQ, down more than 70% from the offering price of USD 17 when it went public in 2019.

However, the Chinese coffee chain pioneer went on to achieve strong revenue growth despite facing some USD 187.5 million in settlement fees and continued operating losses. Currently, Luckin has already emerged from two years of distress caused by the scandal, at least from a financial perspective.

As part of its debt restructuring, in January 27, 2022, a consortium led by Centurium Capital, followed by IDG and Ares SSG Capital Management, bought 383,425,748 Class-A common shares of Luckin for more than USD 400 million. Following the deal, Centurium owns over 30% of Luckin with a voting right of 50%, making it a controlling shareholder. This development marks Luckin’s complete break with the previous management held responsible for the accounting scandal.

On April 11, Luckin announced the completion of its debt restructuring, ending the bankruptcy proceedings. Guo Jinyi, the Chairman and CEO of Luckin, described it as “a new beginning,” and added that “we are confident that Luckin Coffee is well positioned for long-term growth and creation of stakeholder value.”

Inspired by the “reinvention” of Luckin, a bunch of novel brands are riding the wave of growing coffee consumption, ready to make their mark on the domestic coffee scene this year. They include Manner Coffee, Seesaw Coffee, Nowwa (Chinese: 挪瓦咖啡), Algebraist (Chinese: 代数学家) and so on.

Started in 2015 as a roadside coffee stall in Shanghai, Manner Coffee has now expanded throughout China with stores totaling over 300. It received an investment from TikTok owner ByteDance in June 2021, the fourth such investment this domestic boutique coffee brand had secured within six months. Other backers include Temasek, Coatue Management, H Capital and a venture arm of food delivery giant Meituan. According to Bloomberg, Manner is planning an initial public offering in Hong Kong Stock Exchange to raise as much as USD 300 million to continue its expansion.

Seesaw, founded in 2012, grew its revenue by over three times in 2021; the annual offline customers have reached 10 million. Besides, its members have jumped tenfold within a year to 2 million. “We plan to triple our performance growth on the basis of 2021,” said Seesaw. In February 2022, it bagged hundreds of millions of CNY from Stone VC and BA Capital; previously, it received over CNY 145 million, which included funding from the milk tea brand Hey Tea.

A few online coffee brands also appear to be well received by the market. Take Saturnbird (Chinese: 三顿半) as an example. This boutique coffee brand completed a strategic financing round of hundreds of millions in CNY in 2021, with CITIC Industrial Fund leading the investment and IDG, GGV, and Inward Fund also taking part . Sequoia China is also on the list of investors. The brand’s post-investment valuation is now CNY 4.5 billion (USD 710 million), according to  LatePost. Its mini capsule with colorful number labeling and the recycling plan PROJECT RETURN are two innovative selling points for this instant coffee brand, which helps Saturnbird seize the attention of customers on the basis of coffee authenticity and flavor diversity.

In fact, given the changes in the diet of Chinese consumers and the increasing popularity of the beverage, the domestic coffee market has grown at an unprecedented pace in the past two to three years, characterized by financing craze, fast-paced expansion and omni-channel marketing campaigns.

The current domestic coffee market is becoming ever more crowded for sure, since a few higher-end international brands like Peet’s Coffee and Blue Bottle Coffee have also made their foray into the Chinese market. All of these new entrants will pose a threat to Luckin Coffee's recovery. In other words, although it is back on track, Luckin will find it tough to keep its position, let alone restore itself to the not-too-distant glory days. With opportunities yet to be explored in this blue-sea coffee market, it would be interesting to track the future market movement by observing this former Chinese coffee leader that survived all the internal and external adversities. And we will also keep an eye on whether another Chinese “answer” to Starbucks – by whatever name – is on the horizon.