A new term "recommerce" broke in the preserving retail business where unrecycled goods and landfilled waste wreak havoc on environmental means. Taking the concept of the monetary value in pre-owned or secondhand goods, companies are sequestering the unproductive business model and inventing the circular economy whereby unused or second-hand products are sold back, refurbished, or recycled. 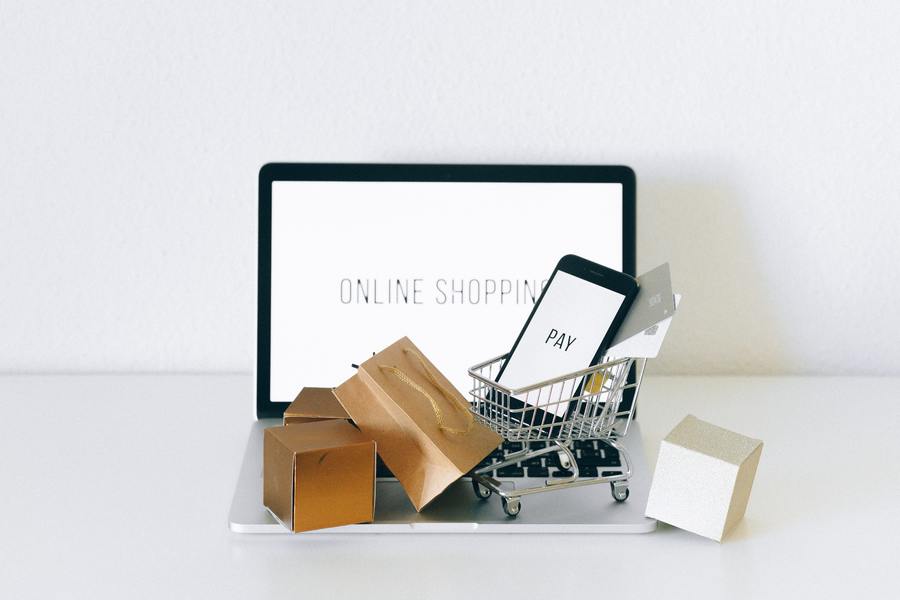 Not only do consumers input far more energy into considering environmental causes, but also they are increasingly pointing to recommerce as a sustainable way to consume and refill their wallets.

From wearable fashion clothing, and flashy smart devices, to endurable home furniture, how recommerce embarks on a change in consumers' attitudes towards sustainability weave both environmental and financial concerns.

Some knee-jerking reactions when consumers choose recommerce are underpinned by their price-sensitive nature of selling underused assets and generating disposable side income. But for the younger generation, their intentions are largely motivated by the influx of media reporting of environmental degradation caused by human activities, mostly from economic activities that produce substantial amounts of waste. The daily sight of environmental pollution was never far from their minds. 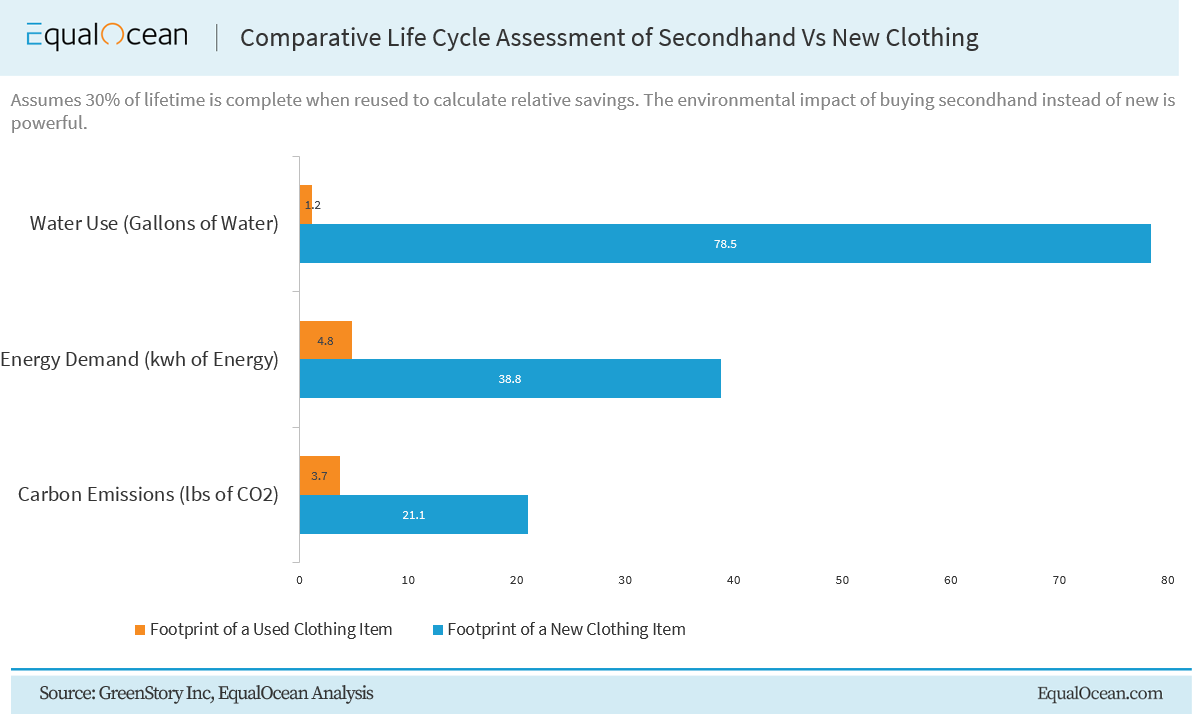 As a matter of fact, Gen Z's income is projected to surpass that of millennials by 2031 and their voice overweights others on the subject of sustainability. Putting more value on sustainable products makes Gen Z a generation of pursuing brands to make drastic changes. Younger consumers grapple with retailers' awareness of boosting sustainability and evolve to achieve more purpose-driven initiatives in this field. Their new value transcends simply inputting works in a recyclable and reusable retail environment.

According to the First Insight Wharton Sustainability Report, 65% of consumers across all generations prefer brand or retailer-operated recommerce among different sustainable shopping methods. Companies, as the other party, tend to bring a more holistic view to engage circularity in their brand involvement with an end goal of retaining and attracting consumers tomorrow.

With these shifts in demographics and consumer preferences in mind, it is clear that market appetite has tilted decisively in the direction of sustainability, propelling recommerce toward the throne. Globally speaking, a 2015 report by PricewaterhouseCoopers predicted that five key sectors in the sharing economy could increase global revenues to $335 billion by 2025. 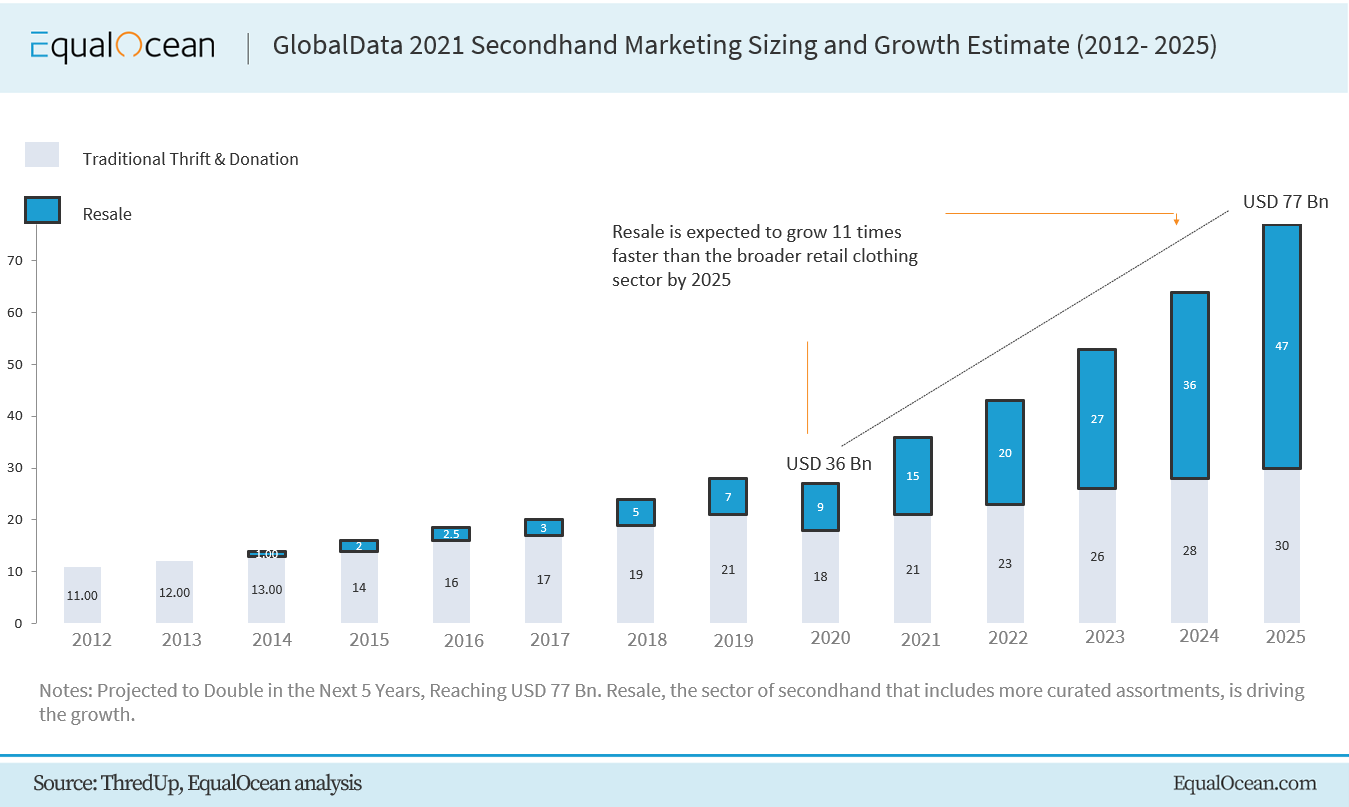 loopt™, the world's first e-commerce platform for the circular economy, is one of the leaders in global recommerce focusing on branded rental subscriptions. The CEO of this Toronto-based company, Kelly Pigeon, said that originally started as a clothing rental subscription for internal use, the company soon realized the sustainable business model and go-to-market strategy of allowing brands to rent their items multiple times rather than a linear single-selling approach. After beginning their outreach to tier 1 retailers, some results came sooner than expected.

"We build this platform and pull our heads from the sand and realize this platform could be so much bigger than just fashion or Canada," said Pigeon, "We are in conversation with companies in Canada, the U.S., and the U.K, and are just operationalized basically anywhere as being market agnostic. Although I don't have visibility into the Asia-Pacific market, we are certainly open to it."

As pacing forward, her company quickly landed its first pilot customer 1800Wheelchair.com, the largest online wheelchair retailer in the U.S, and subsequently partnered with XPDEL to execute operations, including initial picking, receiving, and hospital-grade cleaning, for pool inventories eligible for rent. Environmental concern emerged as the first thing that Pigeon pointed out as a global trend, followed by state incentives.

"We can't continue to take resources from the Earth at the rate that we are going. We are consuming way more than we can replenish at every given year," explained Pigeon, "If I look ahead at how much early Europe is in terms of their journey in circularity, government regulation is absolutely playing a role in incenting companies and consumers that add more responsibility."

In the North American landscape, the U.S. retail market is also inevitably intertwined with this global trend. FloorFound, a Texas-based oversized full-stack recommerce and resale company, has also committed to making business sustainable both from environmental and financial perspectives.

Partnered with companies, such as Floyd and Joybird, FloorFound has strengthened its capability in extending the lifespan of returned items through full-cycle programs. The company disclosed a high level of difficulty for brands to compete for resources as the industry over utilizes resources on the planet. As a solution, brands need to launch their reseller or recommerce programs to complement their to-sale programs.

"The same growth that we have historically is competing with these limited and scarce natural resources as supply chains get more and more disruptive. It is just not viable," said Chris Richter, the Founder, and CEO of FloorFound.

FloorFound mainly operates in helping retailers with return orders in bulky items, such as home furniture, and providing resale services to brands. Among 90% of covered return orders, the company indicated that the whole merchandise process would typically finish within 90 days as the demand is high. With a primary shopper demographic spreading from 25  to 45-year-old females using mobile devices, the company stated that 76% of shoppers claimed their intent to increase spending on resales in the next five years, with people below 30 years of age displaying a high level of enthusiasm buying resale items.

"Because Gen Zs and Millennials are so passionate about resales, they are influencing other generations. It is surprising to see that not just the younger generation, but also other aged groups are also engaged in the resales industry," said Lisa Roberts, the Chief Marketing and Product Officer at FloorFound.

In the meantime, Roberts pointed out that low price and sustainability are two main reasons for consumers to choose resales, according to FloorFound's customer survey. The research shows that discounted prices jumped as a reason with a slightly higher percentage than sustainability speaking of consumer sentiments.

Similarly, in recent years, Pigeon witnessed a steady increase of customers spreading across demographics no matter their age as people intuitively lean towards a smart way to consume and save more money.

"If we look at the economic challenge that we are facing right now, people want a financial deal. During the pandemic, we see people getting more and more comfortable with buying secondhand, even for the older generation whom you might not expect to be out of the gate," said Pigeon.

When asked if secondhand sales would damage the firsthand selling experience for brands, Pigeon delivered humbling remarks to brands reluctant to market circularity and that of which failed to recognize that their consumers have already adopted a different shopping habit. Famous secondhand recommerce platforms like Facebook Marketplace prove the resiliency and the ever-changing nature of online retail business.

"What we said to retailers is that you are all already participating in the second-hand market whether you like it or not. When you are not actively participating, you are not getting one dollar being generated and not controlling your brand experience in any way," said Pigeon, "So there is a real opportunity to take a more active role in the second or third-hand transactions."

On the other side of the Pacific, China's consumers unceasingly shake the retail world. With over 18% of the world's population, China has been pouring money into the commerce space while drowning in the increased scale of consumer demand over the past five years. Appealing to new technologies and online purchases, Chinese consumers are strengthening their presence in online retail sales, culminating in a 14.1% year-on-year increase to CNY 13.1 trillion last year. The magnitude of China's consumer spending has and is expected to expand exponentially. If this trajectory persists, it is estimated by Oxford Economics that the country will overtake the U.S. as the world's largest consumer market as early as 2034.

Standing in the crown position of China's second-hand 3C (Cameras, Computers, Cell phones) market, the largest trendsetter ATRenew is meant to indulge the world's pioneering sustainable recommerce model in the pre-owned consumer electronic infrastructure involving transactions and services. Since its inception in 2011, ATRenew has taken a growing interest in bringing a second life to pre-owned 3C products through recycling, trade-in services, and other procedures that cover the end-to-end value chain to prolong product lifecycle. Separated into different open platforms, such as AHS Recycle, PJT Marketplace, Paipai Marketplace, and AHS Device, the company encompasses C2B, B2B, and B2C capabilities to operate both online and offline services.

"Our automated quality inspection technology has enabled scalability compared to traditional manual quality inspections. We will continue our investments into automation technology and to further advance the automation rate," said Tian, "We undergo service upgrading consistently, with our Camera Box 3.0 launched in late March this year. One of our intelligent inspection tools, Device Hero, also serves as a recycling tool to automatically inspect devices once plugged in mobile phones."

In terms of its business influence and scale, the company has acknowledged an opportunity in secondhand sales, providing a growth engine for brands to attract and retain consumers based on this model. In addition, 3C brands have become increasingly aware of their products' lifecycle and sustainability.

"Our business came from the public solicited proposals and our pre-owned 3C product sales have adopted consumers' dynamic needs. In just a few years, consumers would like to upgrade their smart devices to the latest model," said Tian, "These resales and recycling platforms can in other ways circulate their money in new-with-tags items after a period of time. The total GMV and number of pre-owned consumer electronics transacted through ATRenew's platforms were RMB32.5 billion and 31.2 million, respectively."

In the wake of recommerce in China's 3C consumer industry, there are approximately 2.6 billion consumer electronic devices currently in circulation as of 2020, estimated by CIC. In the meantime, the market penetration is expected to rise from 3.7% to 9.4% by 2025. But speaking of existing challenges, Tian explained that compared to the West, such as Europe, China still has room to grow in the secondhand market.

On the other side of this spectrum, the Chinese government is encouraging a closed-looped economy with a carbon-neutral goal. For example, in China's 14th Five-Year plan, China outlines its intrinsic desire to push a direct-to-consumer (D2C) and circular economy to accelerate the omnichannel businesses that break down the silos between online and offline retail sales.

"I would say that Europe and North America have 40% to 50% of market penetration rate while China is drifting at a single digit, driving us to further explore the market," explained Tian, "We believe that state policy can play a pivotal role to the circular economies development in China."

To align with ATRenew's mission, Tian revealed that the company has been working on the integration of its services within city markets since the fourth quarter of 2021 with a strategy known as "city-level service integration".  Until now, the company has put this strategy into trial implementation across 22 markets, majorly second and third-tier cities. Boosted by state policy, ATRenew is likely to have a more substantial market impact in China's 3C recommerce market, and in doing so, offers a big favor for the sustainable economy.

Global retail leaders are pioneering in weaving the concept of circularity into their essential go-to-market strategy that sustains their brand experience both from the environmental and financial perspectives. From fashion, home furniture, and idle goods, to 3C electronics products, recommerce-alike solutions, such as rental services, resales, and trade-in services, are rewriting the story in the traditional linear retail industry. Low price and sustainability appear to be two primary driving factors based on feedback from global companies in the flourishing recommerce sector.