Though facing pressure in financials and an unfavourable external environment, Tuya is still a stock that should be on your watch list. 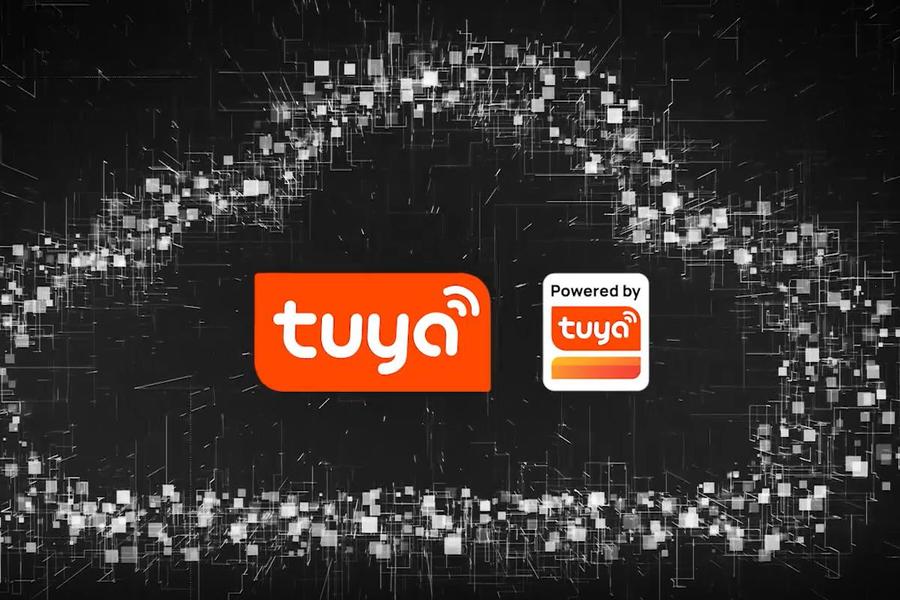 Tuya (TUYA: NYSE), a well-known IoT cloud development platform that EqualOcean covered before, announced its 2021 financial results for the fourth quarter and fiscal year 2021 in March. According to the report, the company’s total revenue reached USD 302.1 million, up 67.9% year over year. Its two core revenue segments, IoT PaaS and SaaS, all experienced high growth in 2021. However, it seems to face rising losses problems under the turbulent macroeconomic environment, especially for China Concept Stocks. In April, EqualOcean interviewed the company again to get to know more about updates that investors care about and this article will give an insight into what's happening and further analyse should Tuya be a stock of potential.

As we mentioned in the last analysis when Tuya went IPO, Tuya is founded in 2014 and has become a popular global IoT PaaS & SaaS development service provider lying in the smart home sub-industrial chain, providing global developers, companies and individuals with one-stop IoT services. The company's two founders both have technical backgrounds and once worked for Alibaba Group (BABA: NYSE), which is a key success factor in the Chinese market. The company's target customers include brands, OEMs, developers, and retail chains across a broad range of smart devices and industries. 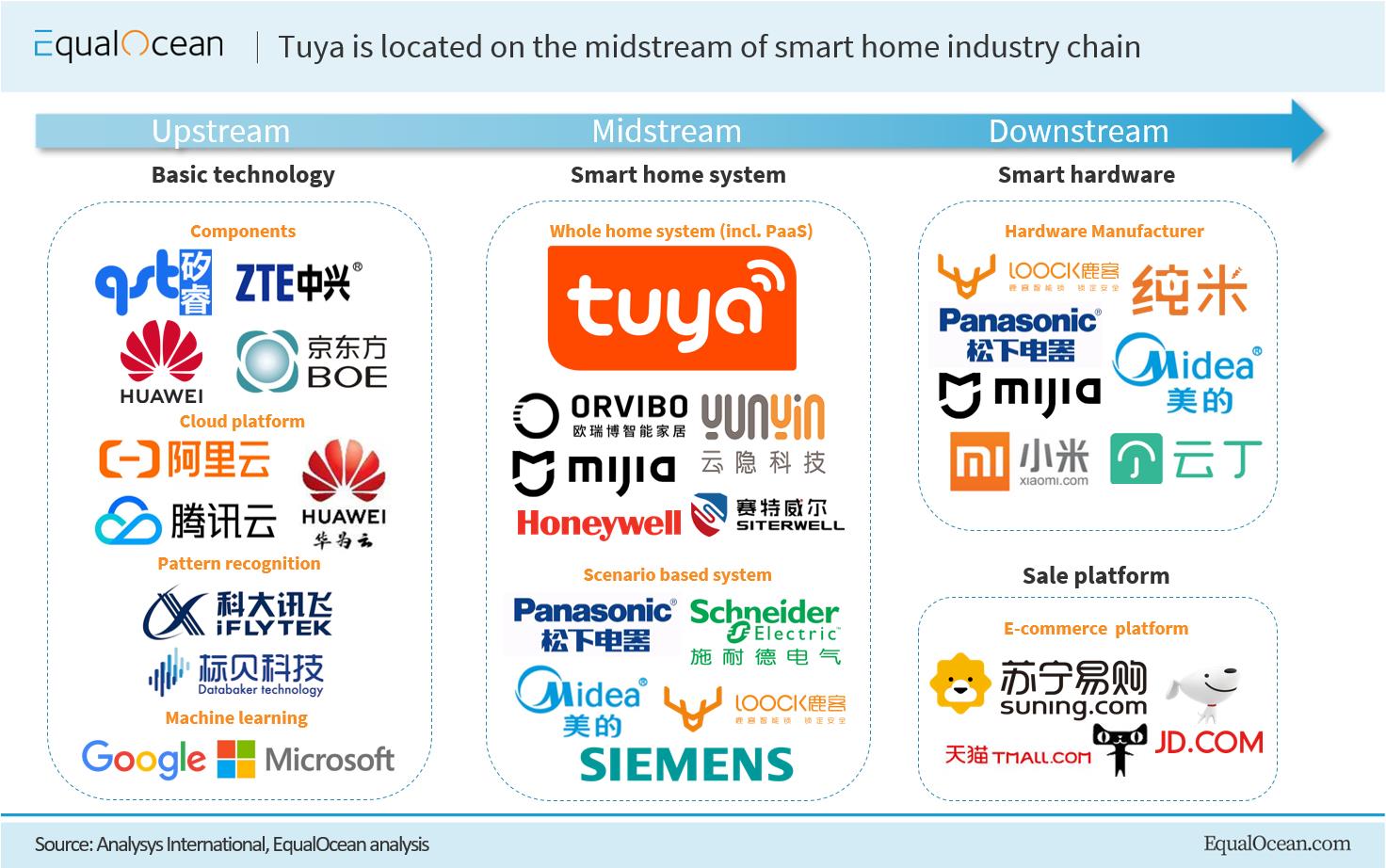 We think the data indicates an ability and a willingness to extend Tuya’s platform usage over time and grow revenue from existing customers. Among all the products, home safety and the sensor products, home appliances products, and entertainment energy-saving products grew at a significantly faster pace than electrical and lighting products, which contributed to about half of IoT PaaS revenue. At the end of 2021, Tuya’s smart hotel and apartments SaaS cumulatively supported the IoT upgrade of more than 40,000 hotel rooms in China with a customer repurchase rate exceeding 85%. Tuya’s smart commercial lighting SaaS supported nearly 300 commercial lighting projects in 12 countries and regions, including China, Singapore, Germany, and the Netherlands, the United Kingdom, Canada, making us believe a steady growth of Tuya in the international market. These all show that the firm is keep rethinking its business model and fulfilling its potential. 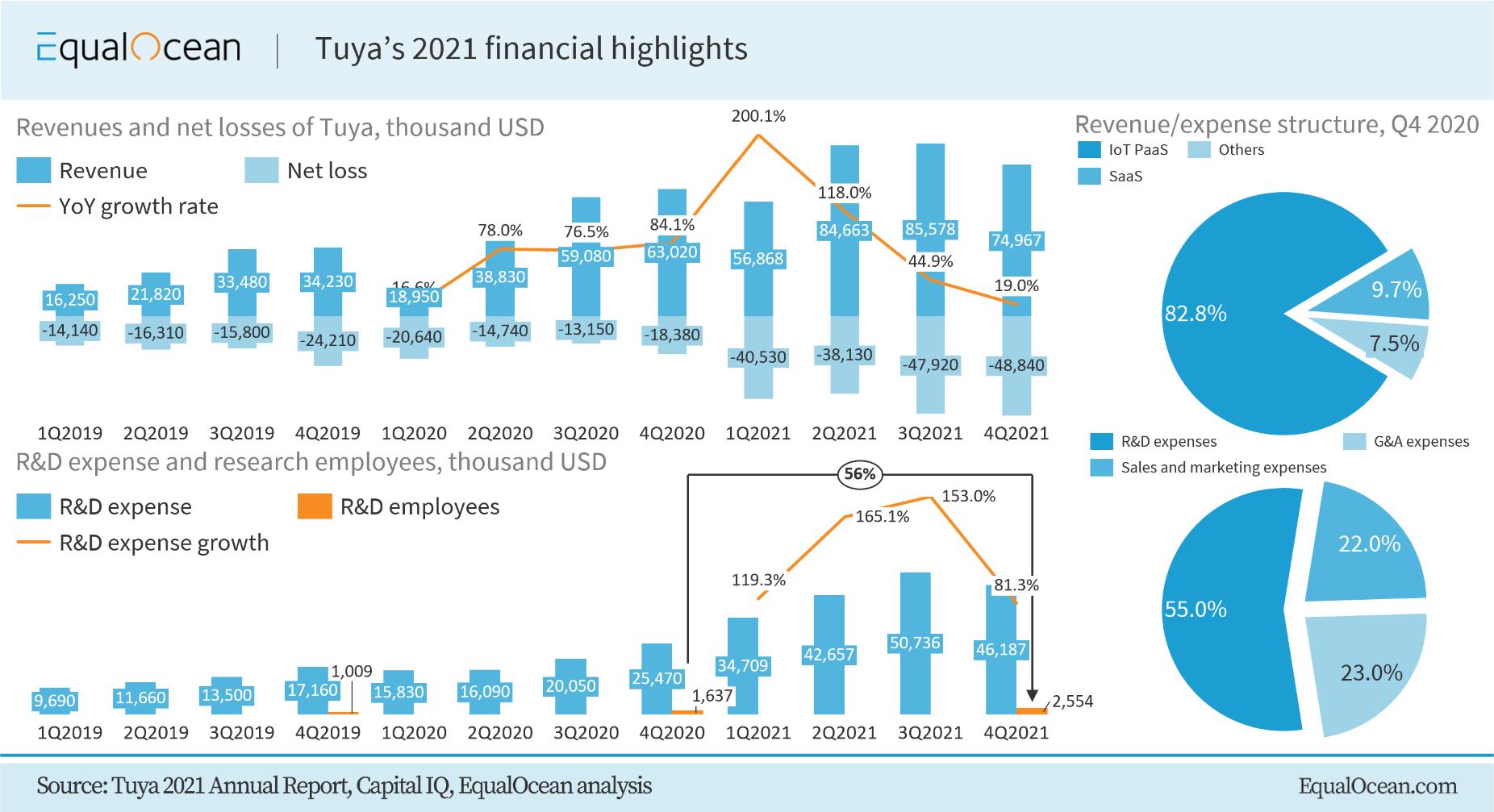 To get more insights into the company, we talk to the company’s management team and find its three undeniable core competencies of it in the sector, which may help the company control its savage cost growth.

First, it is gradually improving a globally intelligent device ecology. It has built a rich ecosystem powered by Tuya intelligent devices. The Tuya IoT development platform has accumulated over 510,000 registered IoT device and software developers, up 94.7% from about 262,000 developers in December 2020, enabling intelligent manufacturing factories or brands to intelligent their products. Developers are from more than 200 countries and regions, covering more than 120,000 stores around the world. At the same time, Tuya has integrated the resources of industry service providers, integrators and operators, gradually laid out the whole industrial chain, and helped brand customers sell smart devices to the world. According to Eva Na, VP & CMO of Tuya whom we interviewed, at the To-C end, Tuya helps consumers control devices of different brands and categories with one app and enjoy the convenient life of interconnection of all things. At the to-B end, firms in property, real estate, rental, hotel and other industries can create their own smart solutions through the Tuya IoT development platform, including SaaS and PaaS level solutions. These, we think, may become a key to competing with the giant players in the sector including Alibaba Cloud and Huawei Cloud, because their business model is different from Tuya's innovative business model with less-completed ecologies. Simultaneously, due to the conflict in international relations, these companies did not develop overseas markets as smoothly as Tuya.

Second, Tuya affirmed its support for Matter and became a member of OLA in 2021. The matter is a unified smart home standard to allow interoperability between devices and smart home platforms, led by Amazon, Apple, Google, Comcast, and the Connectivity Standards Alliance (CSA). We think the platform enables Tuya’s customers and business partners can seamlessly join in the new smart home connectivity standard and provide users with a more convenient smart home experience. Through the questions that we asked Tuya's management team, Tuya planning to launch new series of solutions that will also support the Matter standard possibly in 2022 when the new communication protocol finally launches. As a member of the Board of Directors of CSA and one of the early members of the Matter Work Group, we believe it will earn connections between more devices and increase compatibility, especially for international customers compared with the customers in China mainland. Moreover, Tuya was also invited to be a member of the Open Link Association (OLA), which, we think, will ensure its client base from China's mainland. The layout in both markets has become one of its key strengths as well.

Third, Tuya has maintained good cooperative relations with the three major operators in China and established a moat to a certain extent. Tuya, in such a cooperation, may utilize the large client base that the three operators provided. For the three operators, Tuya can provide valuable privatized IoT deployment for them, reaching a win-win situation. Tuya introduces Tuya Cube at CES 2022, a cloud-agnostic IoT service deployment solution that helps customers overcome challenges posed by the rapidly expanding IoT industry, which we think will further strengthen the cooperation relationships with the three operators.

Though we think Tuya has the three core competencies, the company has been facing an irresistible problem ever since, which is cost, as we keep mentioning.

One main reason is that the IoT products cost has a higher price or obviously higher price percentage than the traditional products, especially in a high inflation economic environment globally. After the inflation of the United States dominated news headlines worldwide by hitting a four-decade high in March 2022, data shows, in 15 of the 34 countries classified as AEs by the IMF’s World Economic Outlook 2022, the inflation in the past 12 months by December 2021 was running above 5%, showing a sudden, shared jump in high inflation which not been seen in more than 20 years. High inflation could create significant sales pressure downstream, which may be transferred to upstream companies such as Tuya.

However, notably, through our research and the interview questions for the company, we noticed that Tuya's pricing strategy is always focused on mutual benefit along the value chain aiming for a long-term growth mode instead of a short one, which we think also could be the reason why Tuya's costs maintain a high and increasing level.

Based on this, we think, with the stabilization of its supply chain costs, there's a chance that Tuya’s cost pattern will be optimized somehow by increasing its overall gross margins. The expansion of its gross margin, as we analysed, will mainly come from three ways in the near future: research optimized control of the cost; increasing economic scales; more revenue generated from segments with higher margins such as home appliances, home safety and sensors, entertainment, and energy-saving.

To value Tuya, we think that finding its comparable company set is of most importance. We chose 6 public companies with similar businesses (Smart home solutions) and also picked the whole software application industry ratio statistical data for comparison. Based on the statistics, we found that Tuya's ratio (1.9 x) is much lower than its competitors' weighted average (5.1x, 50% weighting of 6 smart home solution companies and 50% weighting of software application industry average), indicating it is undervalued compared with its peers. However, considering the international conflicts and inflation adjustments, we think it is at a great price but with high risk. We believe Tuya is a company with great potential in the sector from its valuation analysis. 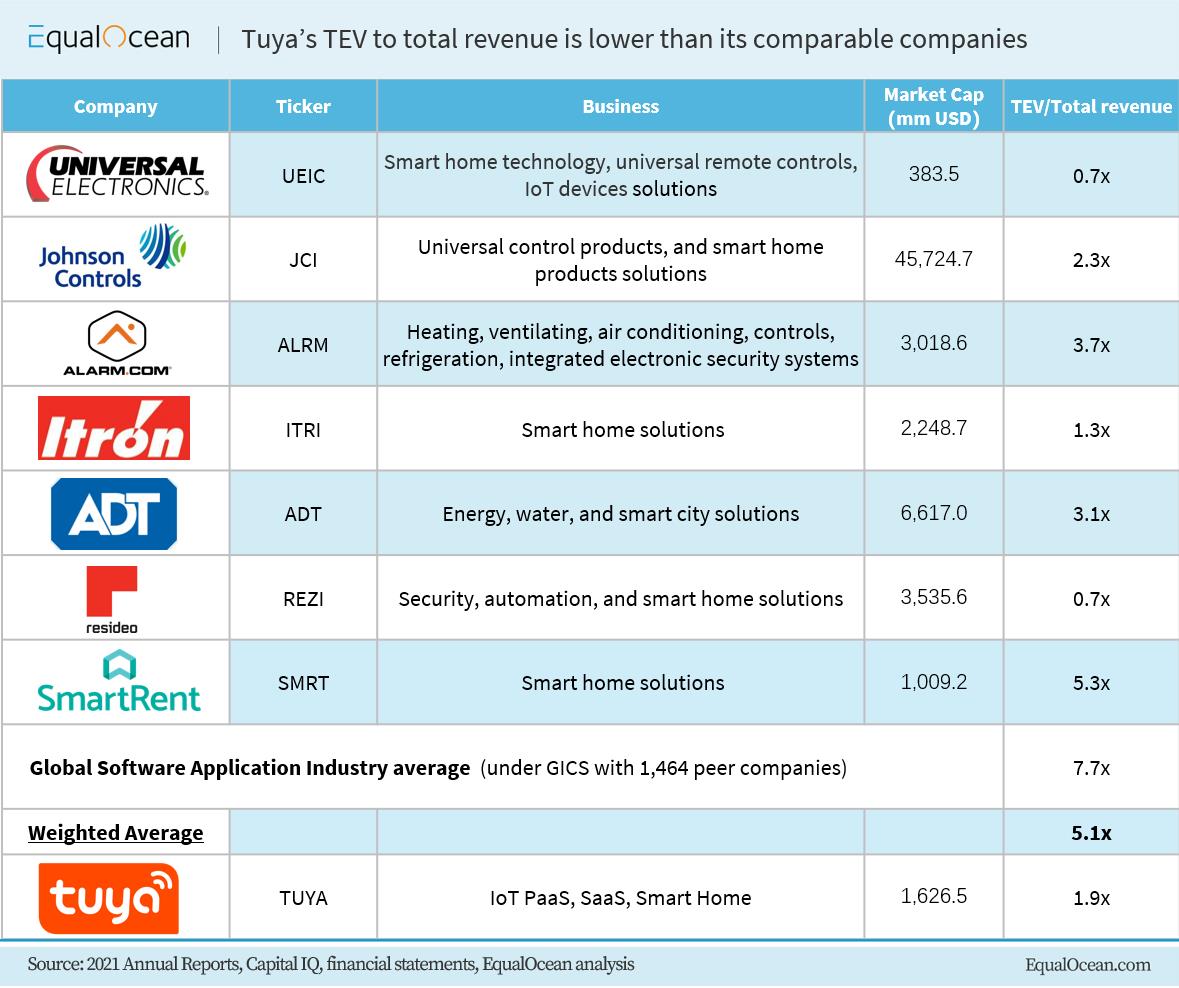 As Tuya mentioned in its earnings call, the entire global IoT market, including hardware, software and services, is expected to grow from USD 659.2 billion in 2019 to USD 1,126 billion in 2024, with a compound annual growth rate of 11.0%. Based on this and look forward, we also get satisfying answers from Jessie Liu that, Tuya will remain cautious toward 2022 of the challenging global economies and further prioritize categories where IoT products are not too expensive than the traditional IoT products such as home sensor products, home appliance products, entertainment products, all the transportation products, to further cut costs. Tuya's Eva Na also mentioned that the IoT PaaS and SaaS services are all important to Tuya in 2022 without obvious bias. We also learn that it will strengthen its Bluetooth smart solutions that are more cost-effective, focusing on the optimization of Tuya’s operational efficiency to accelerate its upcoming breakeven timeline, making Tuya a company-worthy bet in 2022.