Here we sketched a full picture of the new food and beverage sector in China. 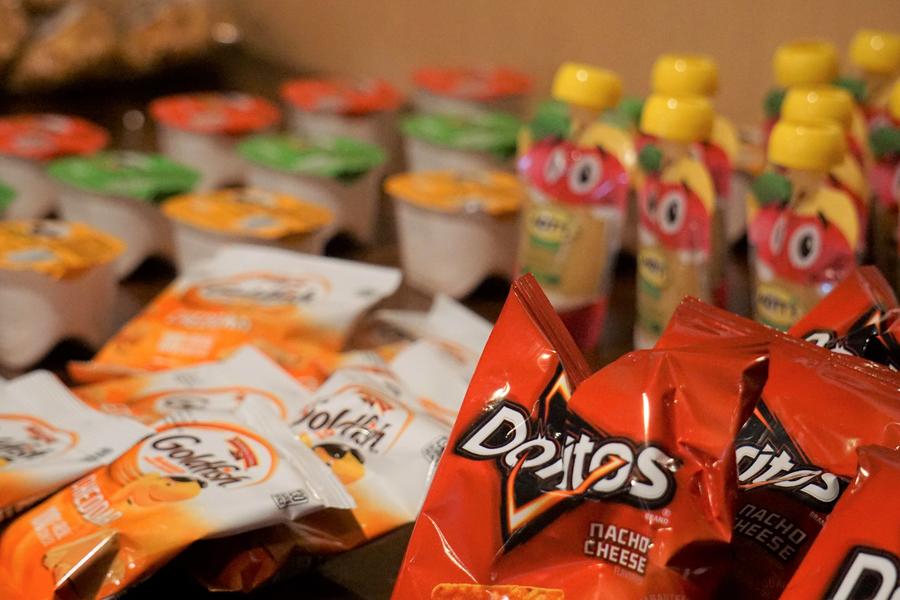 When we investigate the soft drink sector in China's secondary market, there are only less than a dozen of stocks with a market capitalization of CNY 150 billion in total. Apparently, it is not reflecting the real soft drink market size. Similar story for the entire food and beverage market, which is becoming increasingly popular in recent years with huge amounts of private capital inflows. Those are sectors filled with young companies and brands, marathoning on the way to going public or being bought out with a large number of players.

In 2020, the number of deals in the food and beverage sector has increased by 51% year over year. The total fund-raised rose by 137% to CNY 7.9 billion, which significantly surpassed the figures back to 2015 to 2019 of around CNY 3.5 billion. Compared to the global market, China's consumer goods sector still has huge room to grow. Here we will try to answer why the primary market of the food and beverage sectors are so popular and what should the investors want to look at.

The emerging new food and beverage brands in China are growing at rapid speeds, especially compared with most other countries. We believe under China's current economic environment, domestic brands can reach the scale in 5 to 8 years that overseas brands normally take 10 to 20 years.

Here raises a question: Is the faster climbing speeds contributed by the consumption upgrade led by generational change, or driven by the technology advancement?

It has to be both. The Z-generation consisted of a large portion of the customers in China, who have unique but diverse consumption habits. The hyper-fast economic growth in China in the past decades pushed up the income level for the public that spurred a way higher spending power, with which the demands exceed the supply.

More than that, the strong supply chain system in China is supporting the growth of the entire consumer goods industry, which also differentiates the local brands with others. The digitalization level in China is leading the world, which ensures a prompt and efficient response and strategy change regarding the consumers' buying behaviors.

The food and beverage sector has been highly defensive over other industries historically, with relatively better financials within the consumer goods industry. The sector in China is just standing at the perfect time with sufficient fuels.

Of course, the favorable environment incubated more new brands, so it might not be easy for them to grow from something too big. For example, the stock-keeping unit (SKU) in China is way faster than global speed, say 3 to 5 months compared to the 3 to 5 years.  It requires stronger innovation and management, which is a good way to filter those qualified young brands.

Investors want to grab a spoon in the most-growing market, but the choices should be whichever can really stand out and best meet the customers.

The 'new' in this sector has two meanings: reframing and creation. The first one represents brands that use technologies to reshape the existing food and beverage products, like instant coffee. The second one refers to the creation of a new kind, like the first show-up of oat milk.

Those new domestic brands tend to dig the real needs of young generations, which leads the entire food and beverage sector to transform from 'simply eatable and drinkable for life' to 'eat and drink healthier, nourisher, and more styled.'

The double-eleven shopping festival, the largest shopping season of the year in China, can be a 'little world' reflecting the trend of the entire market and customers' spending behavior. From where we can see healthier drinks ranked top. Nongfu Spring (Chinese: 农夫山泉), a water brand in China, has beverage and water like 'Lithium water' that targets the silver population, juice, tea beverage, and flavored sparkling water targets younger generations, vegan yogurt and energy drinks for people who works out. Genki Forest (Chinese: 元气森林), a flavored zero beverage Chinese brand, already deployed its business both domestically and internationally. Wong Lo Kat (Chinese: 王老吉), an herb-based beverage brand that helps reduce the inner heat for people based on Chinese herbology. Oatly, Vitasoy and Soymilk are three brands leading in the non-dairy milk market. Other coffee and energy drink are also on the list. 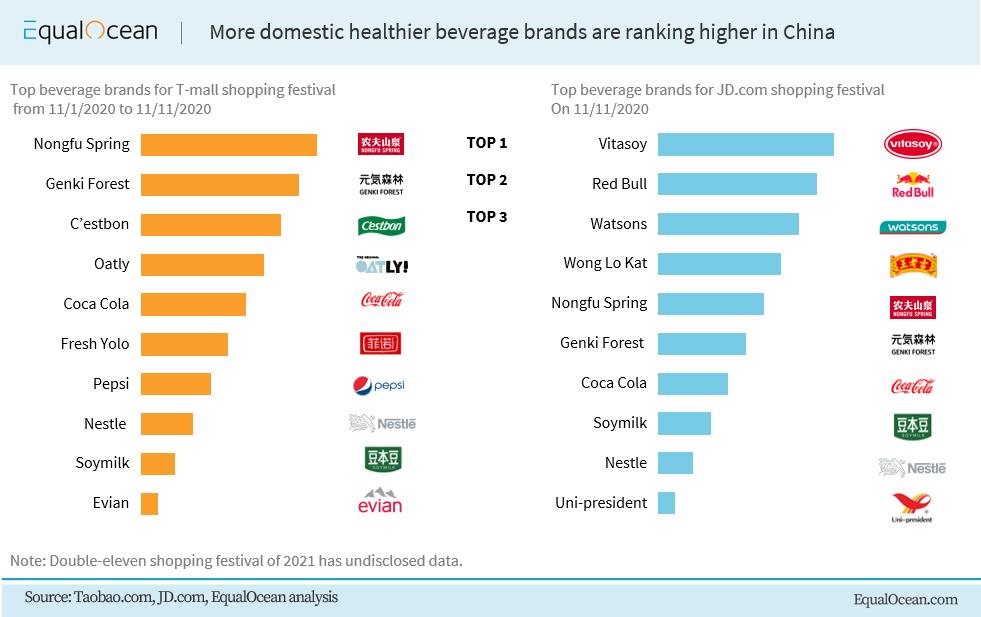 As a traditional international beverage brand, Starbucks has never been beaten by young domestic brands, especially in China's market. It portrayed a basic logic for a consumer goods brand: know your customers, exactly as the book 'Pour Your Heart into It' by Howard Schultz, the former CEO of Starbucks. Focusing the products and services is the key to casting a brand. The customers control the lifeline of a brand. 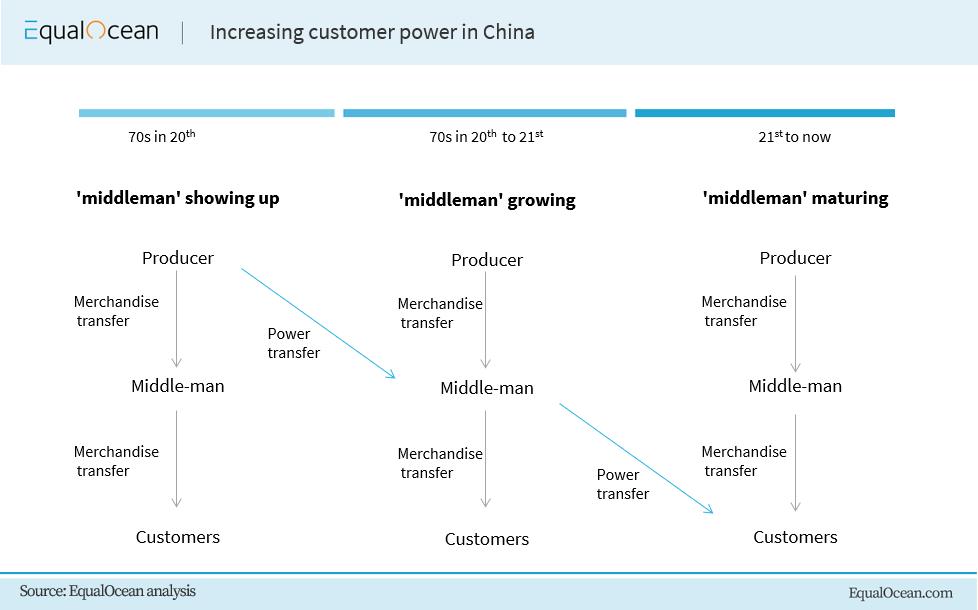 Baosfpastry, a bakery brand in China, hit the top position in China's offline bakery market in recent years and is considered the second generation of bakeries. Before, offline bakeries were mostly from Korea, represented by Paris Baguette, 85 °C, and Tous Les Jours, which had a large space in every store that included a kitchen, shelves, and sitting areas, which does generate a certain cost of renting. Also, they provide varieties of bakeries, which are backed by the chain production, even cause waste at the end of every day. Baosfpastry is different. It has no leftovers; all the products are freshly made with the best taste delivered to customers. The kitchen takes up the majority of the storage space to save money and reduce waste. All the space is for producing that single bakery you take. It is backed by a new business logic, which is product and customer-focused.

The success of a brand comes from the repurchasing from customers and the inter-marketing within them. Everything is telling us that the customers are the most important node within the whole chain, with the power of brand merchants, distributors, retailers and suppliers to be increasingly faded. Also, with the increasing symmetry of information, brands are supposed to do whatever they can to gain the trust of the customers.

Here we provide the 'The Brand' list by EqualOcean, which includes the new brands in the food and beverage sector in China that achieved what we said above. 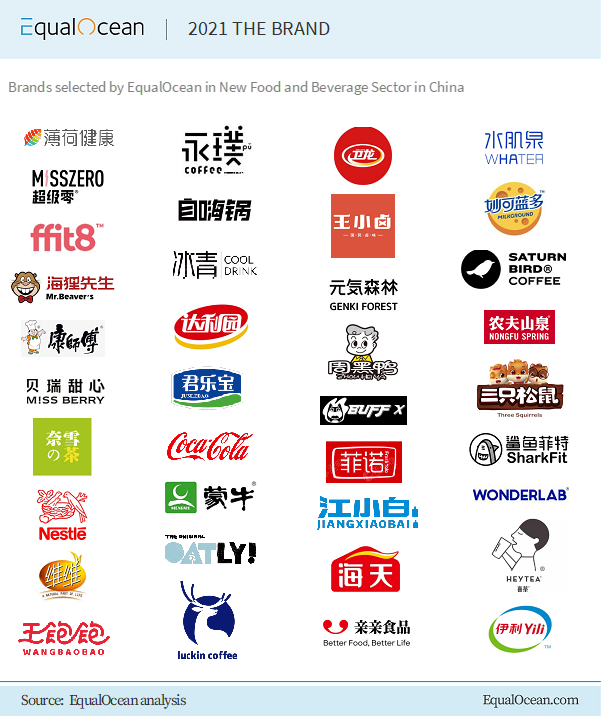