As projects and startups emerge in connection with 5G development and China's national agenda, the Asian giant is potentially set to become the Cloud gaming hub above and beyond other markets. 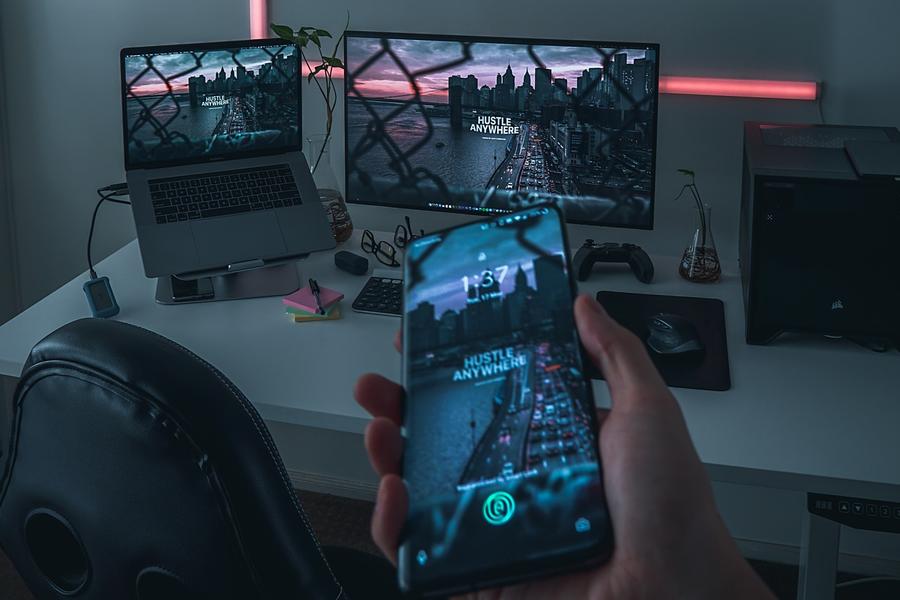 The Chinese gaming industry has been restless in the year 2021, with tightening up of regulatory standards and intensified competition. Meanwhile, another factor has contributed to the vibes in this space. Cloud gaming has been on everyone's lips for several years, but experts warn that its prevalence is highly dependent on the universal use of 5G. Since 2019, China has been leading in developing 5G technology and building base stations across the country. By the end of 2021, China had installed nearly 1.4 million stations (link in Chinese), and China Mobile vowed in November 2021 to deploy national coverage of 5G signals by the end of 2022.

According to Newzoo, the global Cloud gaming market will grow at a CAGR of 101%, while the same figure for the Chinese market should reach 135%. It seems China's national endeavor on 5G is to generate positive externalities on the development of Cloud gaming in the country and would further strengthen China's global leadership in this space. 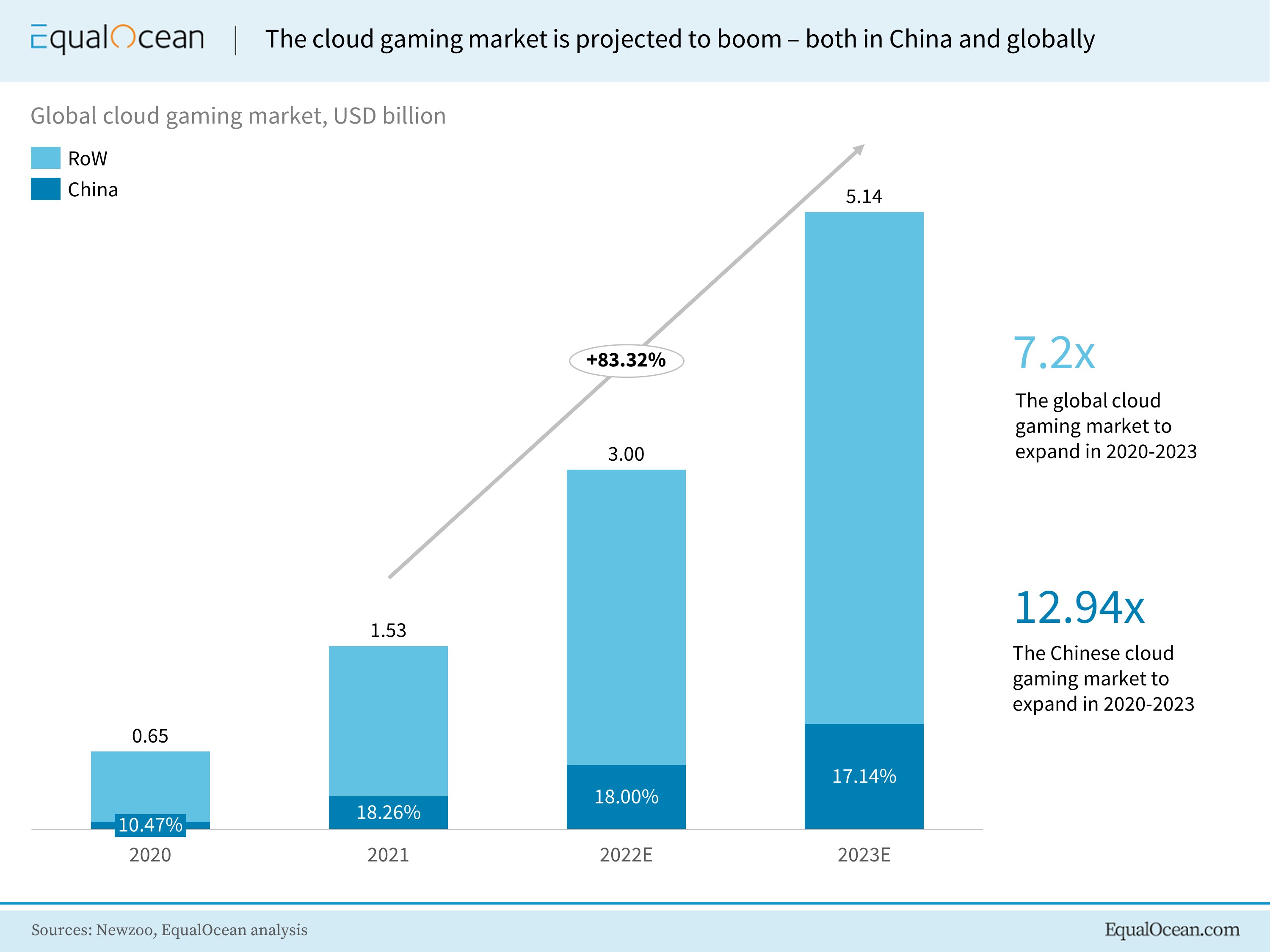 As rapid infrastructure development provides fertile ground for Cloud gaming in China, many major players in the industry have initiated their own projects in the growing space.

Apart from game companies, leading Chinese tech firms have also spearheaded towards the upstream of Cloud gaming, releasing tech-driven Cloud platforms one after the other. China's telecom big three – China Mobile, China Telecom and China Unicom have all invested in Cloud-based gaming services. Huawei has also cast its power on gaming in its Huawei Cloud segment, aiming for "innovative technologies for low costs and improved experience" in Cloud gaming. 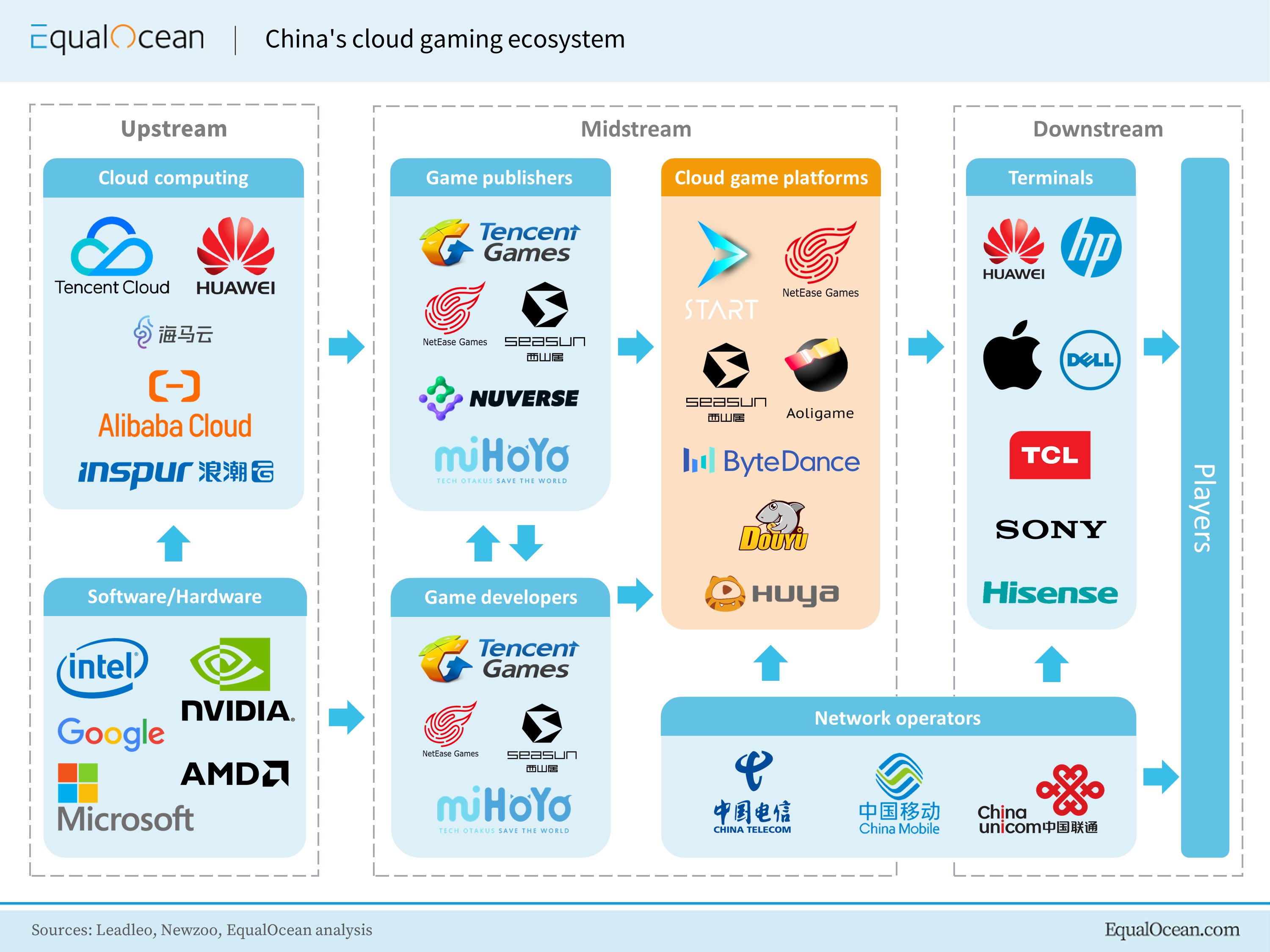 Aside from tech giants, some startups providing Cloud gaming solutions in China look promising as well, with several obtaining funds from famous VCs in China, as well as from renowned game publishers. With an earlier round of financing by Xiaomi of CNY 150 million, WELL-LINK completed its CNY 400 million Series B in December 2021, led by Future Capital, followed by Xiaomi and miHoYo. In August 2021, the company helped miHoYo launch the Cloud version of Genshin Impact, a globally renowned ARPG mobile game owned by miHoYo. Another platform worth mentioning is Haima Cloud. The firm, featuring full-stack Cloud gaming solutions, gained CNY 280 million investment from UCloud (688158:SH) and Migu, a subsidiary wholly owned by China Mobile.

However, Cloud gaming is a fairly risky business, especially for startups. The reasons are two-fold. First, there are so-called 'three mountains' in terms of the cost of Cloud gaming – the cost for servers, the cost for bandwidth and the cost for game IPs. Startups that do not possess their original games must either invest in developing new games or purchase IPs from large game publishers. Both require vast funds. Besides, as the number of players on the platform expands, upgrading servers to contain the increasing traffic becomes another source of financial burden.

On the other hand, Cloud gaming is powered by the ability of platforms to receive real-time commands from players and transmit the in-game feedbacks back to the players in the form of video streams. Therefore, to ensure an experience equivalent to playing with downloaded games, neck-snapping network speed and low latency are a must, especially for MOBA and FPS games that involve constant feedback. However, the current 5G services have not reached the promised speed yet. Currently, Cloud gaming platforms are still unable to replace the traditional way of playing games and the user base is quite limited.

While the market is still attracted to the idea of the metaverse, the Cloud gaming space in China has seen many tangible projects in process. With the commercialization of 5G networks and emerging projects driving up the size of the supply chain, the market is generally optimistic: the high latency problem is likely to be solved, while the bandwidth costs are set to decrease in the near future.