A Late Starter, ByteDance Begins to Accelerate Its Effort in Healthcare

The Chinese upstart behind TikTok has emerged into a major venture capital investor.

Online healthcare (or telehealth) has been in the spotlight in 2021. As consumers' awareness and acceptance continued to improve, telehealth utilization rose to 38 times the pre-COVID-19 baseline. And the skyrocketing investment in the virtual-enabled healthcare industry has further boosted its valuation to CNY 1.2 trillion, according to EqualOcean data.

Pivots by tech giants towards healthcare have not been uncommon in recent years. Alibaba (BABA:NASDAQ) joined the game as early as 1998 by founding Alibaba Health (0241:HK), which achieved profits for the first time in 2021 with over CNY 100 billion in market valuation; JD Health (6618:HK) has raised over USD 1.8 billion of venture capital since it was founded in 2015 and went public in Hong Kong in 2020, netting USD 3.48 billion. Baidu (BIDU:NASDAQ, 9888:HK) and Tencent (0700:HK) are also continuing to make efforts in the field of online healthcare, with four and three related investments in 2021 solely; Meituan (3690:HK) is also busy of extending its business scope through medical beauty industry since 2018, which has now been in the first echelon with over one million monthly active users. 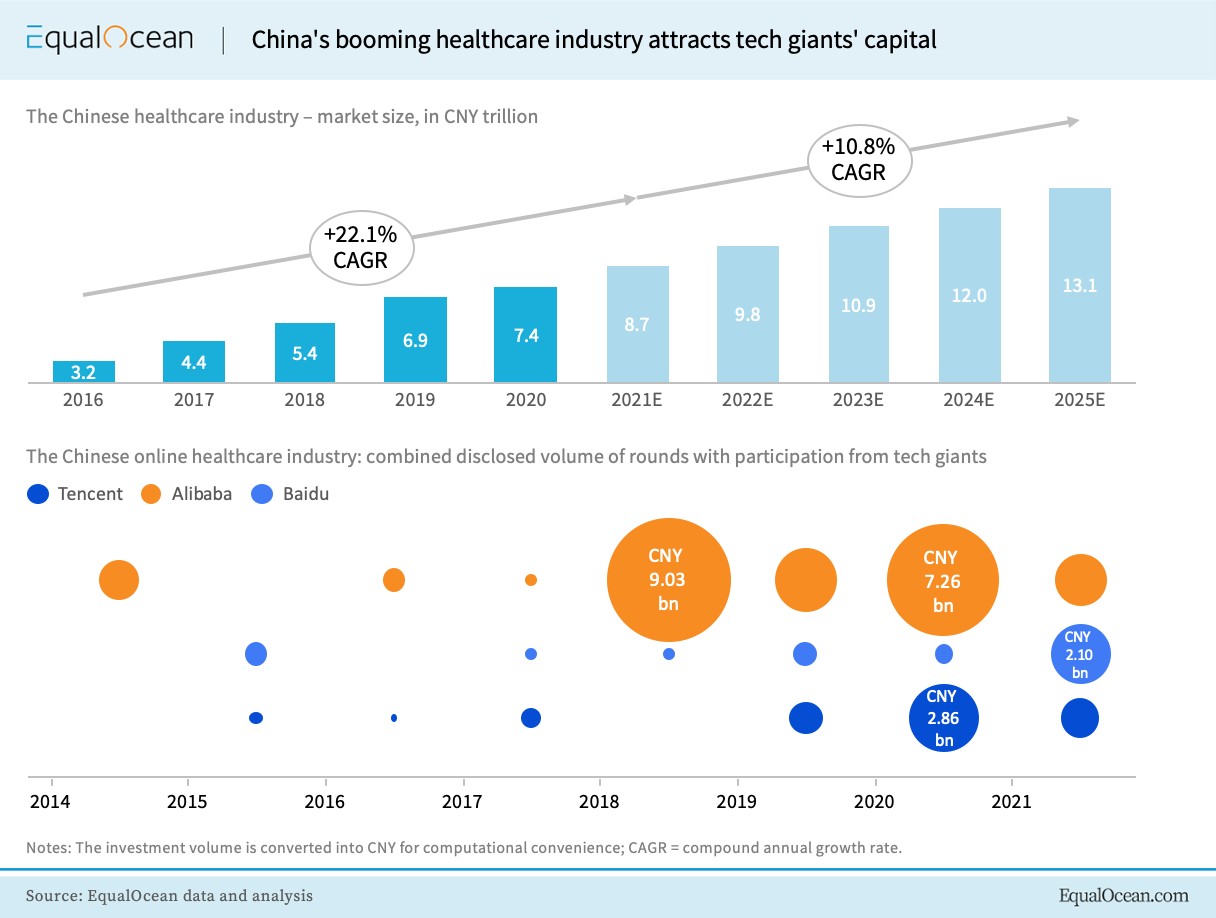 According to EqualOcean data, ByteDance has invested in 56 companies in 2021 only, covering areas from enterprise services, hardware, consumption, entertainment to education, technology and others, and is still in expansion. 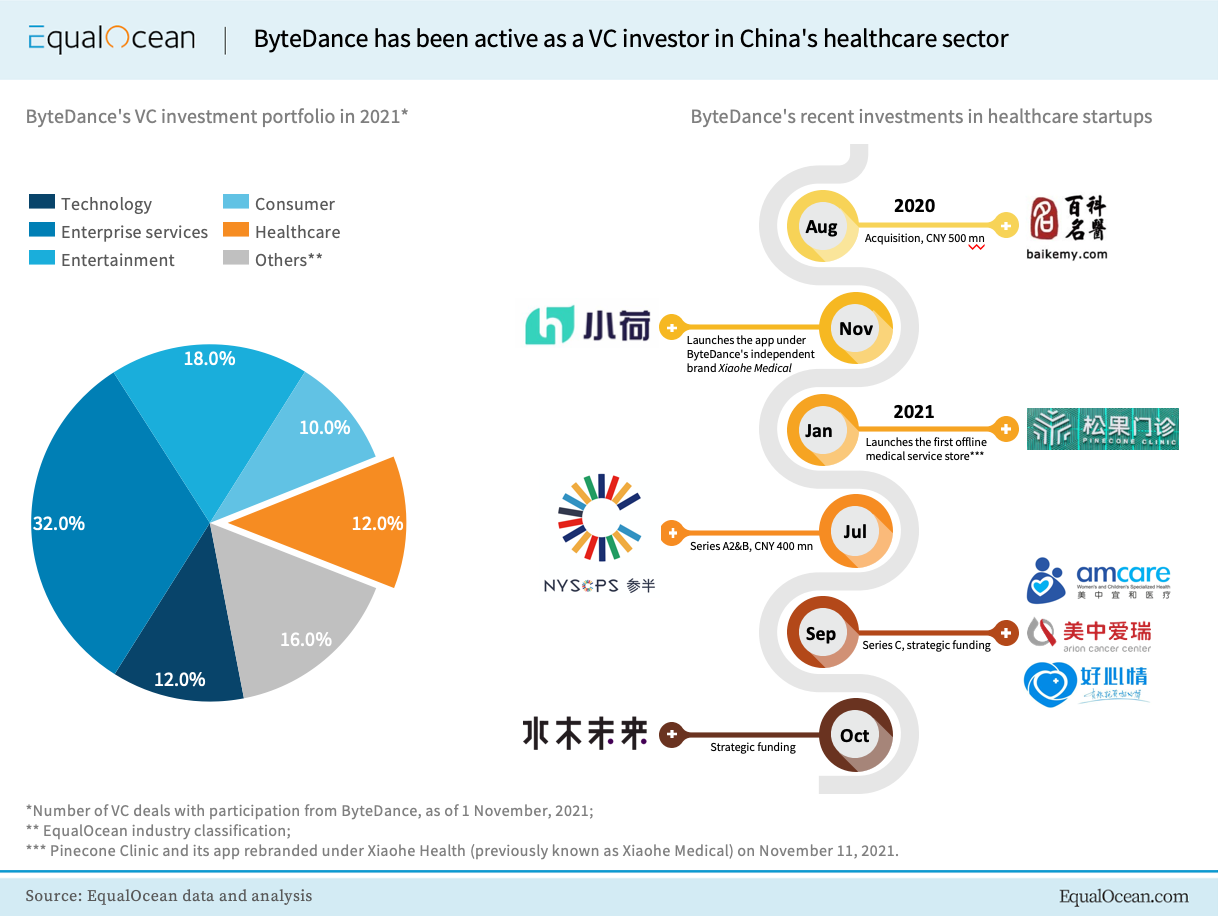 Check out our previous articles about ByteDance:

It is generally easier to invest in areas that are more compatible with a company's core businesses. That's the very logic ByteDance follows.

One of the TikTok operator's competitive points is the huge traffic it leverages. The acquisition of Baikemy.com was a good start. Launched in 2012, Baikemy.com has closed four rounds of financing, obtaining over CNY 374 million in three years. Given its cooperation with major hospitals top scholars and other experts, it was once the only designated platform of the authoritative medical science project of the National Health Commission (NHC). Baikemy.com's high-quality consumer traffic seems synergetic with that of ByteDance's news platform Toutiao (Chinese: 今日头条) and searching engine so.taoutiao.com (Chinese: 头条搜索).

Mental health, women's and children's and medical beauty services are another three target areas that are perceived to have strong compatibility with ByteDance. It is easier to attract traffic via online mental health tests or a Quora-like community, which could also match ByteDance's content ecosystem. Meanwhile, whether it is Good Mood, Amcare Healthcare or Arion Care, they are all trailblazing within their respective segments in the Chinese market; for example, Good Mood has the largest pool of doctors in the mental health field, while Amcare Healthcare has become a leader in the private medical industry in terms of coverage, the number of hospitals and the market share in the high-end segment.

ByteDance's next big move might be in the sphere of AI drug development. Its AI Labs, which are located in Beijing, Shanghai and California, are currently recruiting talents to conduct cutting-edge research in drug discovery and manufacturing with the support of AI algorithms.

Still, a long way to go

Online healthcare is a domain full of risks. Whether ByteDance can continue to achieve desired results as it has done before will take a long time to test – for one, it took  Alibaba Health six years.

On October 26, 2021, NHC issued a series of regulations on the online medical industry. The key applications of AI technologies are becoming strictly supervised. Although there has been no direct impact on ByteDance so far, it implies a more stringent future regulatory environment which should now be paid a great deal of attention to.

CONTACT US
Scan QR code to contact us for professional consulting services
Next article
Without Backing from the Tech Giants, Huize Bucks the Trend