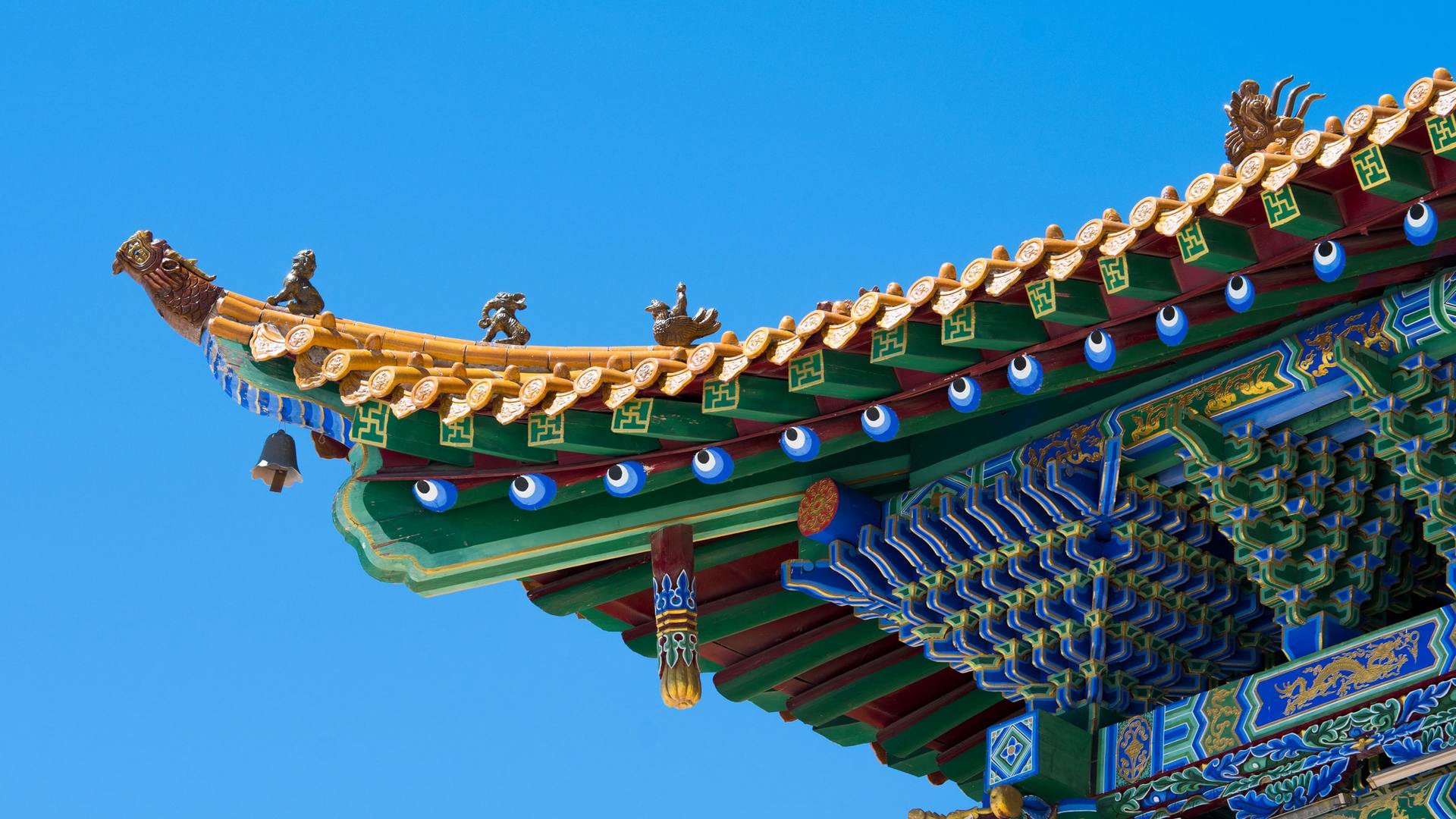 Creating extra value for JD.com's 530 million active users will be the company's next strategic endeavor. 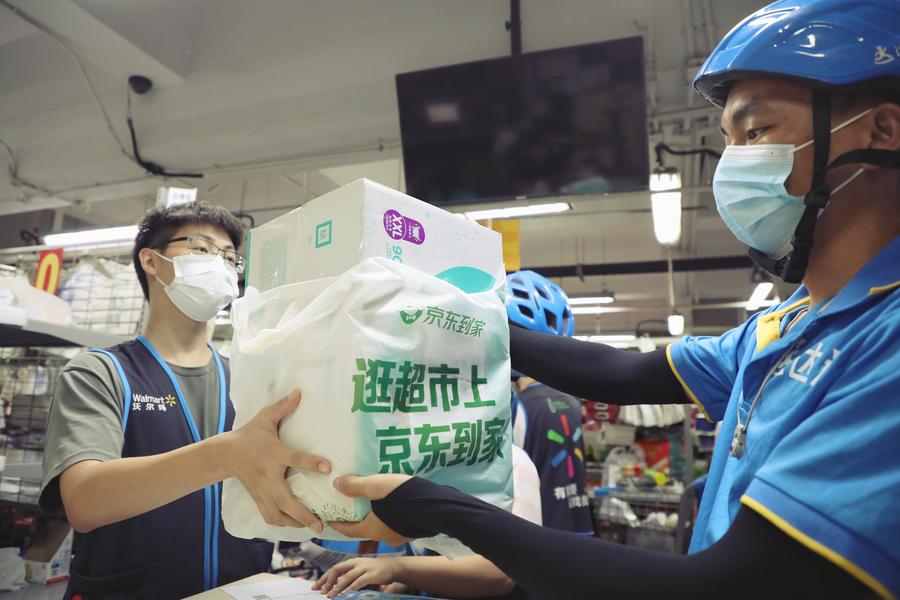 With the tumultuous unfolding around China's major New York-listed tech companies, plenty of mid-cap stocks have been affected as well, losing their market value in 2021. In some cases, however, investors' fear has little-to-nothing to do with the firms' real fundamentals.

Dada Nexus (DADA:NASDAQ) may be one such company. The Chinese operator of on-demand delivery and retail platforms recently posted its Q2 2021 financials. This time, the key results slightly exceeded both the analyst consensus and the firm's own projections, showing a pro forma revenue growth of 81.3% (the revenue recognition model was changed in April) and CNY 549 million in net loss – the Street's average expectation was CNY 615 million.

Dada was founded in 2014 as an "open local on-demand delivery platform" and took its present form after a merger with JD.com's (JD:NASDAQ) spinoff JDDJ in 2016; since the completion of that deal, it has been developing around a duo of products, boosting the core services' scope and building adjacent businesses and partnerships. In June 2020, the firm went public on Nasdaq, raising funds vital to stay competitive in the ongoing battle for Chinese consumers.

A growth-stage company, Dada is scrambling for a larger market share while moving towards profitability. Throughout the June quarter, its expansion continued.

This article looks at the key indicators' dynamics to analyze Dada Now and JDDJ's performance within those three months. We first crunch the newly reported data, then calculate key ratios to track the progress in financials and unit economics. To top it off, we provide a glance at Dada's tech initiatives beyond the two platforms.

In the twelve months through June 2021, the number of JDDJ's active users reached 51.3 million, increasing by 58.8% year-on-year. Dada relates this growth, among other things, to its cooperation with JD.com. During the earnings call, the company's executives stated that it "continued to win customers' trust" and is going to proceed with the "in-depth cooperation with JD to better serve the omnichannel and on-demand needs of JD's over 530 million active users." In addition, a new tool is being constructed at the intersection of the two digital ecosystems: 'Fujin' (Chinese: '附近' – nearby), the former's entry point within the latter's app, has been tested in a handful of cities, including Shenzhen and Shanghai.

The duet's convergence is happening amid a post-COVID boom in the Chinese on-demand retail market. The number of users in the space has lately skyrocketed and is projected (link in Chinese) to grow at a 31% CAGR from 2019 to 2023. Consumers have changed their shopping habits forever.

It's also crucial that despite the magnitude of new possible outbreaks in China, this trend will remain strong, as the fix-cost-burdened offline stores are embracing online traffic. And Dada is among the country's top platforms that drive brick-and-mortar players' online sales, accelerating their adoption of digital tools.

From the ESG perspective, COVID-19 has pushed Dada Group to shoulder more social responsibility. Its executives stated that the company had worked "closely with local governments to provide the daily supplies and the on-demand delivery for the customers," and, as a result, "received recognition from the government."

Users are just a part – although the most critical one – of the story. The supply-side matters as much. As per the company, this quarter, JDDJ made significant progress in category expansion.

In retrospect, Dada started its business with groceries and has now covered a number of areas, such as pharma and apparel. By now, it has been taking the lead in the supermarket category and seeking partnerships with big chains. By the end of Q2 2021, hands had been shaken between Dada and "80 chains out of China's top 100."

The most recent attempt in the consumer electronics arena was emphasized a couple of times in the investor conference. As on-demand retailing has gradually been recognized by smartphone manufacturers, Dada has partnered with hundreds of distributors and established cooperation with Apple and vivo, among other major brands. Besides, the company stepped further into the PC category, cooperating with Microsoft, Asus, Dell and Alienware, among others. In response to an analyst's question, the executives disclosed that the potential of some new categories, including home appliances and cosmetics, will be further explored.

In Q2, Dada's total expenses have added to around CNY 2.21 billion. The sales and marketing cost grew from CNY 386 million in Q2 2020 to CNY 824 million in Q2 2021. According to the unaudited financial results, this boost was mainly driven by the rising "incentives given to JDDJ consumers" and "referral fees paid to retailer store staff and third parties" to attract new users to the platform. Considerable investment was also directed to R&D, showing the intention to build comprehensive tech products on top of the company's commercial network. (One is Haibo.)

The operations and support expenses reached CNY 1.14 billion, compared with CNY 1.10 billion in the same quarter of 2020. The rise in rider cost stemming from the increasing intra-city delivery order volume mainly contributed to the accretion of this category; but this was partially offset by the decrease of rider-related costs incurred by the last-mile delivery business model upgrade – "effective since April 2021, the cost of riders for last-mile delivery services has been directly paid through third-party companies instead of through the company." 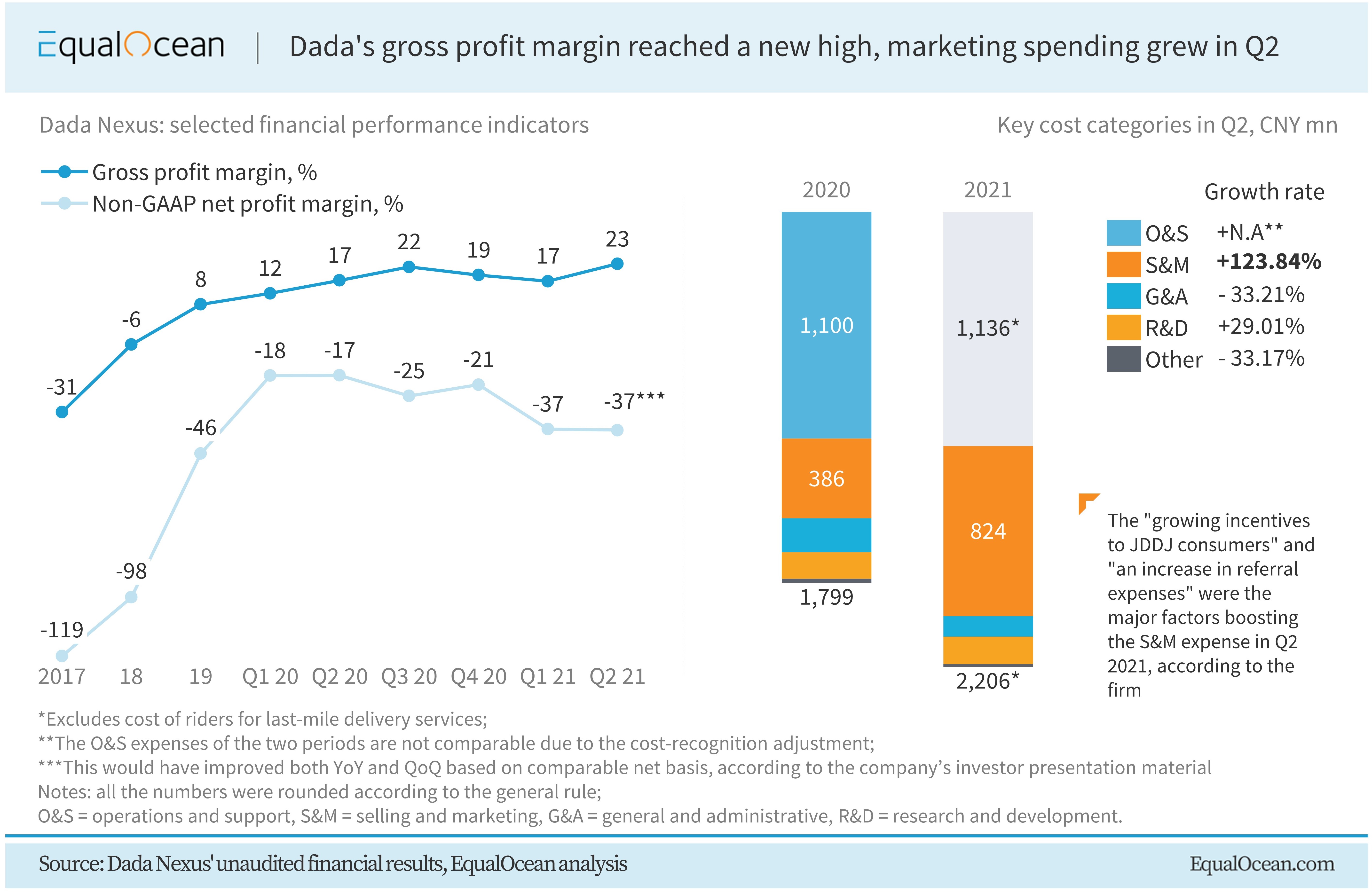 Even though the company experienced massive revenue growth in Q2, the spending on market expansion has kept the net profit margin at low levels. On a sequential basis, though, Dada improved its net profit margin, thanks to the efficiency gain in operations and consumer incentives.

Positive dynamics in absolute figures, be it revenue or user pool growth, are never enough to claim success for a pre-profit platform economy enterprise. Dada's key business ratios, nonetheless, show some progress, too. 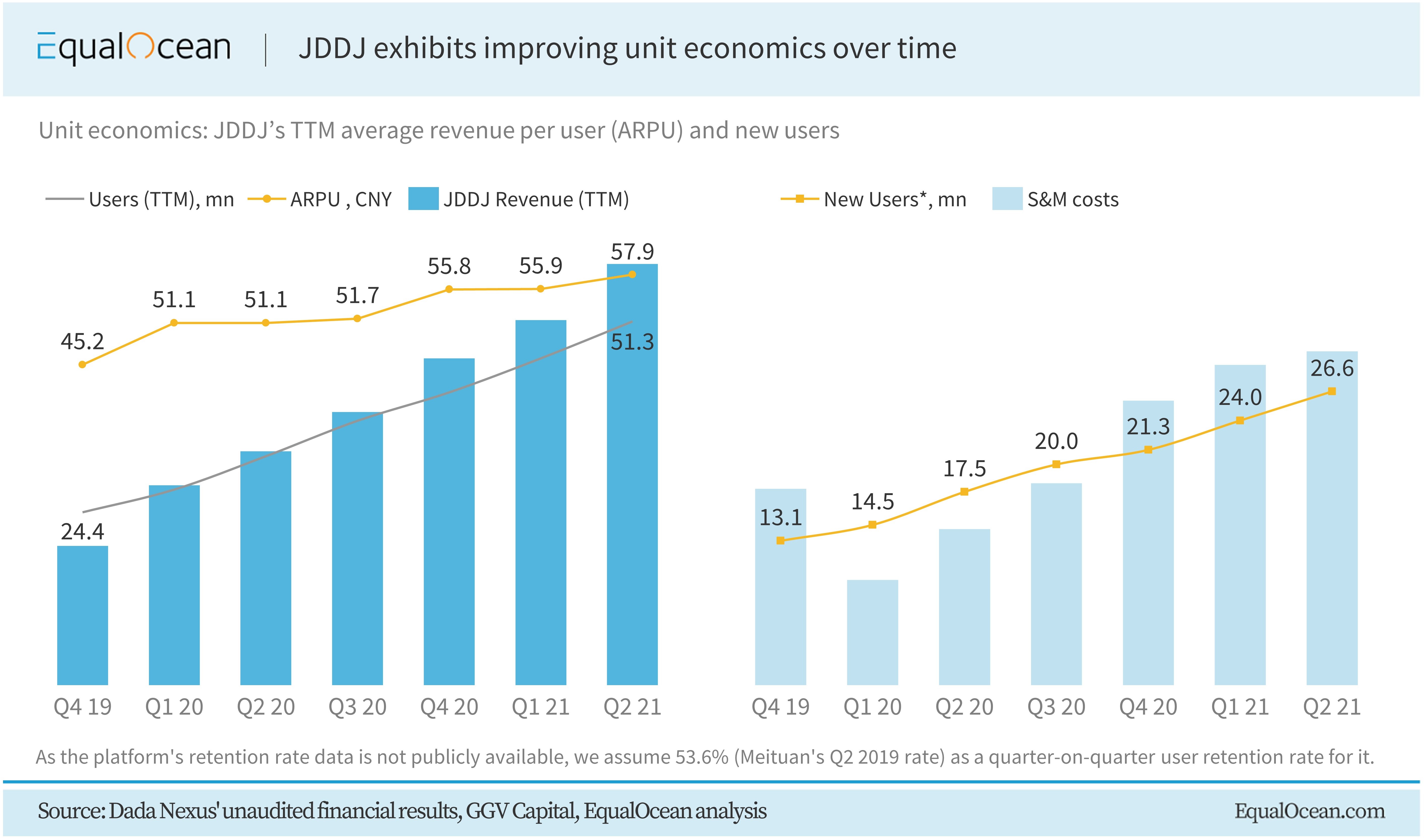 Using Meituan's Q2 2019 number (53.6%) as a proxy for quarter-on-quarter user retention rate (as opposed to customer churn) and the only assumption in this analysis, we found that JDDJ's user base may not only grow on the TTM basis, but the speed might have been accelerating continuously over the past eight quarters, which was perhaps caused by the platform's significant word-of-mouth marketing potential and effective referral system.

Reporting a financially solid three-month period, Dada announced a few other updates this time. For one thing, it included an extra 1,000 stores into SaaS Haibo's network. The company is also developing an open autonomous delivery operation system, enabling on-demand retail applications for various hardware providers. The system has been tested and reportedly adopted by JD's SEVEN FRESH and Yonghui Superstores.

Both projects are narratives to keep tabs on. Those are highly likely to become key differentiators in the upcoming maturity phase of the on-demand delivery and retail market.

Over the past quarters, Dada Nexus has been growing at high double digits; good fundamentals and a balanced tactical arsenal are set to protect its market position.