Young but rapidly growing cities in China are aggressively catching up with four mega metropolitan areas – Beijing, Shanghai, Guangzhou, and Shenzhen – during this process, great investment opportunities will be generated. 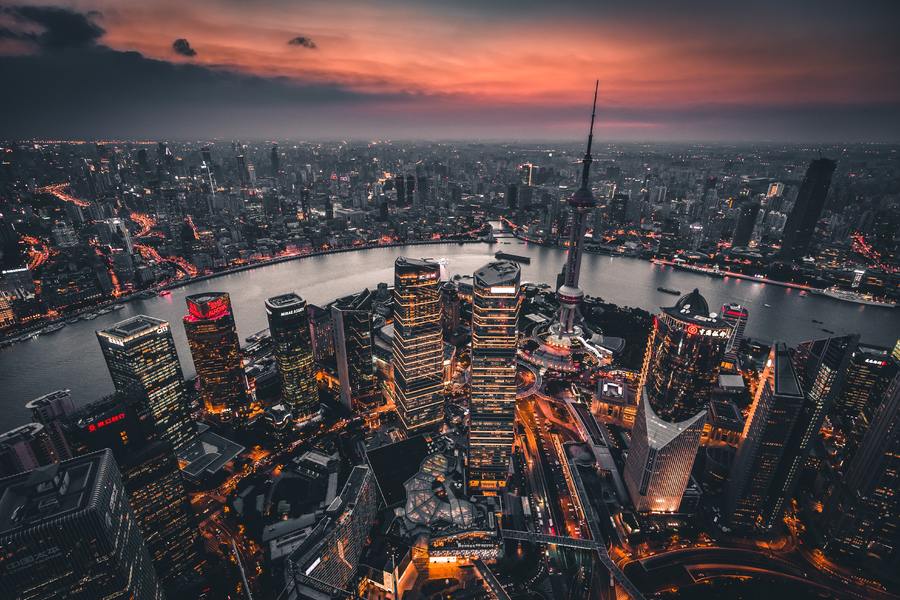 When the first metro launched London, England became a clear winner from the industrial revolution; the debut of the first high-speed train in Japan showed the power of a developed entity; and Paris led the world to light the city through streetlamps.

Cities are empowering for their countries – through them national powers are presented. China has been astonishing the world with its compressed development over the past decades. In 2020, China contributed 17.5% in the world’s total GDP and contributed 30% to total growth. China's power is being centered on how the world moves with cities occupying more territories in the world’s top league.

For countries like US and China, that control massive land areas, more than one large city is empowering. However, unlike US, where the metropolitan areas have been established and become stable, urban circles in China are still expanding. We have thriving towns in China rapidly rising to chase the prosperity of Beijing and Shanghai, Guangzhou, and Shenzhen ('Bei Shang Guang Shen' from now on) – four top cities - have been ranked as Alpha according to GaWC 2020.

'BEI SHANG GUANG SHEN', the four ultra-modern cities in China that have surpassed many top cities in developed countries with an average GDP per capita of USD 23,700, a 210% higher rate than the national level.  Four metropolitan areas have been incubated by Bei Shang Guang Shen: Beijing-Tianjin-Hebei area, Shanghai's Yangtze River Delta, and Shenzhen and Guangzhou's Pearl River Delta. Some large cities in these areas, as well as more in the middle of the country that are trying to keep up with the speed of Bei Shang Guang Shen, are going to form a more balanced economy, looking at the development map.

A Chinese story – from 'urbanization' to 'metropolitanization'

Urbanization is crucial for China's economic restructuring and for pushing forward the country hit the upper-middle-income countries' club, with at least 600 million of the population moving out of poverty. The debut of the 'urbanization' can be tracked back to 1992 when the state in China formally set the goal of building a socialist market economy. Since then, the percentage of the urban population has increased significantly, from 26.94% in 1991 to 54.77% in 2014. Over the years, China has been appealing to tertiary industries, transferring more farming occupations to the cities, decreasing the contribution of the farming industry to the GDP. The labor force that came from the secondary and tertiary industries had increased from 30% in the 80s to 75% by end of 2019. The reallocation of the population from rural to urban areas increased labor productivity and therefore determined the high-speed growth over the past 20 years.

However, with the slow-down of the GDP growth, the middle-income trap behind made the stare realized that the 'urbanization' needs to be upgraded. The megacities, like 'Bei Shang Guang Shen,' have been suffering from the unbalance between the infrastructure, services and the massive population. This also reflects the urbanization difference between emerging countries like China, and developed ones, like the US.

In the western world, represented by the US and the UK, the level of development between small towns and cities is consistent with facilities available wherever. Developed tertiary industries determine a low demand for people living in large cities. On the other hand, cities in China are always way more modern than small towns, with the latter have limited access to many infrastructures and services. The 'BEI SHANG GUANG SHEN' have gathered the best resources and the most advanced life services that attract most of the young generations. The population issue and unbalanced development in China ask for better resource distribution. Under which background, the revised 'urbanization,' which is more like the 'metropolitanization' that emphasizes the relocation of the population between cities, especially from megacities to smaller cities, was launched.

Now, the state is trying to form at least 20 more large metropolitan areas. The established megacities and the new 20s are auxiliaries for each other, as the latter is taking the extra pressure from the former, but also fed by the high-end technologies as well as the top talents. This is an inevitable process for China to approach the developed markets and weaken regionally unbalanced developments.

Local governments in China have been responding to the call as well, by introducing policies to attract more companies to build headquarters and branches in lower-tier cities, generating so-called 'headquarters economy.' Tax benefits, infrastructure, business district, most important talents, will be brought to the area, therefore take the overwhelmed pressure from the megacities, and boost the local economy to form a more balanced development structure. For example, large companies like Xiaomi, JD.com, Meituan, have been relocating headquarters or diverting the important departments out of Beijing and Shanghai, to smaller cities.

Opportunities come from growth, not maturity

The speed of China's rise is unprecedented but inevitable. The opportunities are what we want to catch from this speedy evolution.

During 2020, excepting Wuhan – which severely suffered from the COVID-19 pandemic – all the rest posted either similar or higher-level GDP growth than 'BEI SHANG GUANG SHEN.' The 20 followers are aggressively chasing. However, there is still a long way to go.

In 2020, Shanghai's GDP hit CNY 3.87 trillion (USD 599 billion). Benchmarking Shanghai, Chongqing – the fifth top GDP city in 2020 right after 'BEI SHANG GUANG SHEN' – reported the figure of CNY 2.5 trillion (USD 387 billion), which equals the level Shanghai already achieved six years ago in 2015. Same story, Suzhou – the next top player – is nine years behind Shanghai. When looking into the 24th candidate, Dongguan, a growing city near Shenzhen and Guangzhou that is going to be continued benefited from two megacities, only reached Shanghai's GDP scale in 2006, a 15-year difference. 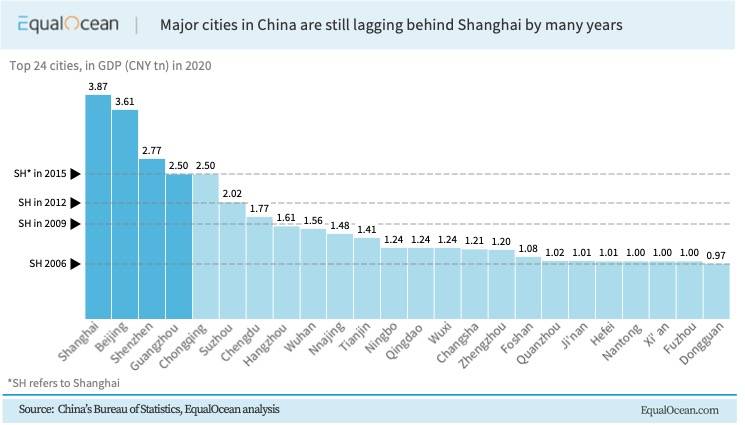 In 2020, among around 900 million of the population living in urban areas, over a third were just living in small towns next to their villages, most of whom still make their living based on farming. From what we said of the essence of urbanization in China, the metropolitanization rate just reached 40%, a much lower level compared to the urbanization the state reported of 63.89% (61.4% according to the World Bank). Furthermore, only 460 million people among all the urbanization population have an occupation in a city, which indicates a 32% of the real 'urbanization' rate.

The GDP per capita hit USD 10,000 in 2019, marking a level of the upper-middle-income country. However, the average urbanization rate in which countries reported as 66%, significantly higher than the 60.6% in China in the same year.

According to the 14th five-year plan, China must reach 65% of the urban population rate. If China can maintain the 5.5% of GDP growth rate, it will knock on the door of high-income nations, in 2023 or 2024, however, which shows an average of 81% urbanization rate. It is clear that still a large gap exists between China and developed countries. But based on our projection, China's urbanization rate in 2050 will reach 75%. 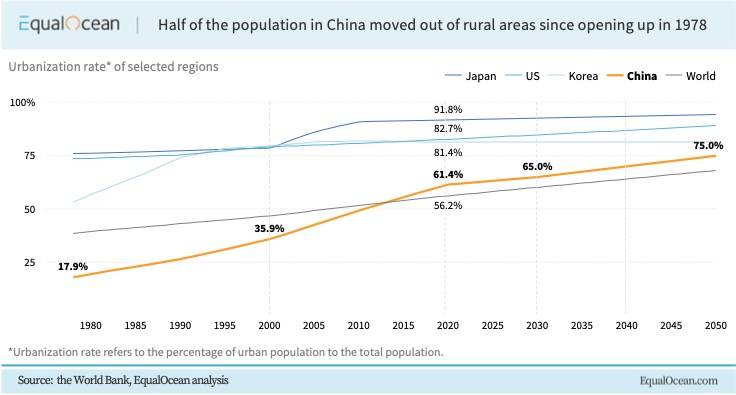 In the context of fact that there is a certain disparity between four mega cities and other metropolitan areas, as well as the country's position in the growing stage of urbanization, along with the supports of Chinese government in helping cities to catch up, we believe 20 more 'BEI SHANG GUANG SHEN' will be built not for too long. Following which huge investment opportunities will be generated.

The bottom line - China and the world

According to GaWC - the most reputational city ranking worldwide, China has six cities included in the Alpha grade and fourteen in Beta. In contrast, the US has four and twelve. China is already leading the mega-metropolis scale, which will continue to expand with the deepening urbanization progress.

Most of the top 20 cities in China have expanded at a much faster speed than the top 20 ones in the US, based on the figures of 2019, before the pandemic crackdown. We don't see this trend is likely to be changed; in contrast, we believe the growth differences will become even wider in the short future as the US is slowing down as a developed country, while China will continue to strengthen. What is more, given that China is the second-largest economy, it has the power and assertiveness to make sure that the metropolitanization divide will no longer be a chasm shortly. 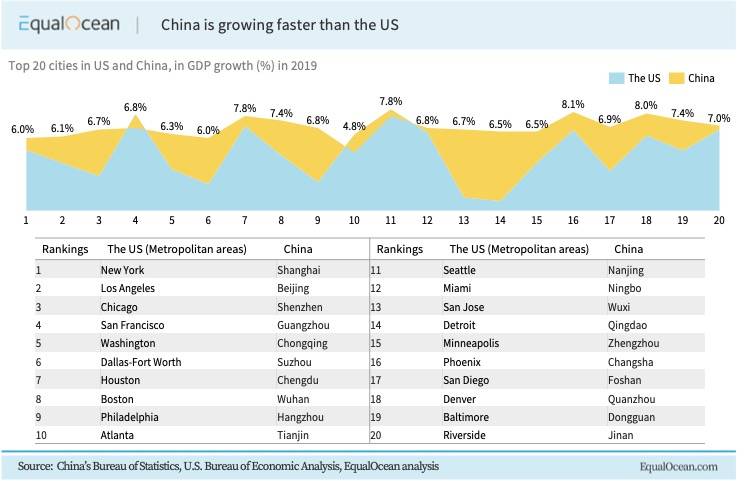 China, apparently, has more than 'BEI SHANG GUANG SHEN.' In the future ten years, we strongly believe that China will build another 20 Alpha cities, which are expected to provide great opportunities for both domestic and foreign investors.

Check out
Read next
In depth
Communication

Volkswagen's EVs Are Taking Off in China, May Soon Surpass NIO's Market Share

What's 'New' about the New Consumer Brands in China?