The world's third-largest semiconductor foundry operator is full speed ahead, with its revenue expected to keep rising till 4Q 2021. 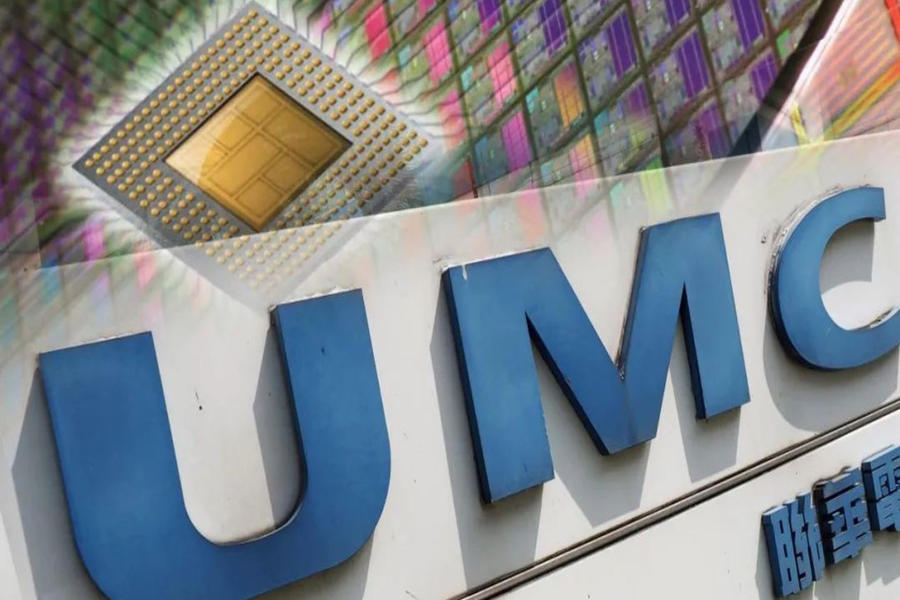 ●    The recent seller's market is poised to expand with a strong demand for electronic chips in the foundry industry.

●        The company's stock price is promising to rise further with an influx of clients and positive annual financial results.

●        UMC can overturn fierce competition at the mature nodes market with existing advantages.

Recently, United Microelectronics Corporation (UMC: NYSE) released its fourth-quarter earnings statement – its factory's utilization rate reached 99% by the end of 2020. It is expected to reach 100% full utilization in 1Q 2021. In July 2020, the market had a strong demand for 8-inch chip productions, especially for 28nm chips. UMC expects that the situation will last until 3Q 2021.

The current seller's market was mainly situated in the smart car industry. Electric vehicle chips have been in shortage since 2H 2020. At the beginning of December 2020, due to the shortage, Volkswagen stopped producing new vehicles, while Ford, General Motors, Toyota, and Nissan announced plans to reduce their output of vehicles. Meanwhile, the coronavirus pandemic sparked the global economic recession, increasing demands for digital devices such as notebooks, tablets, TVs, and game consoles for stay-at-home activities.  The relevant chips are mainly produced by 8-inch semiconductor factories, further escalating the supply shortage in this realm. As a result, UMC's stock price has risen 300% since July 2020, reaching USD 10 per share. The following article will discuss whether UMC's stock price is likely to continue to grow.

Notably, during the same period, its net profit reached 393 million, surging 206.3% year-on-year and 25% quarter-on-quarter. The company's net margin has increased to 24%, nearly three times the level in 2018.

Rumors have it that UMC had won three large mature technique chip orders from Intel, Qualcomm, and NVIDIA by the end of 2020. Simultaneously, IDM giants such as Texas Instruments, STMicroelectronics, and Sony continue to increase orders for mature process chips. We forecast that these prior foundations will contribute to a big jump in UMC's stock price.

UMC changed its strategy, and it works

Since 2018, UMC has chosen a different development strategy from other competitors. In August 2018, UMC announced it would pause research for advancing the productional technology of chips under 12nm nodes. It became the first wafer foundry in the world to give up the competition of cutting-edge nodes. As shown in the figure above, since 2018, the corresponding proportion of the company's advanced processes has been reduced to zero, but for mature nodes such as 65nm and 28nm, the proportion has been increased. 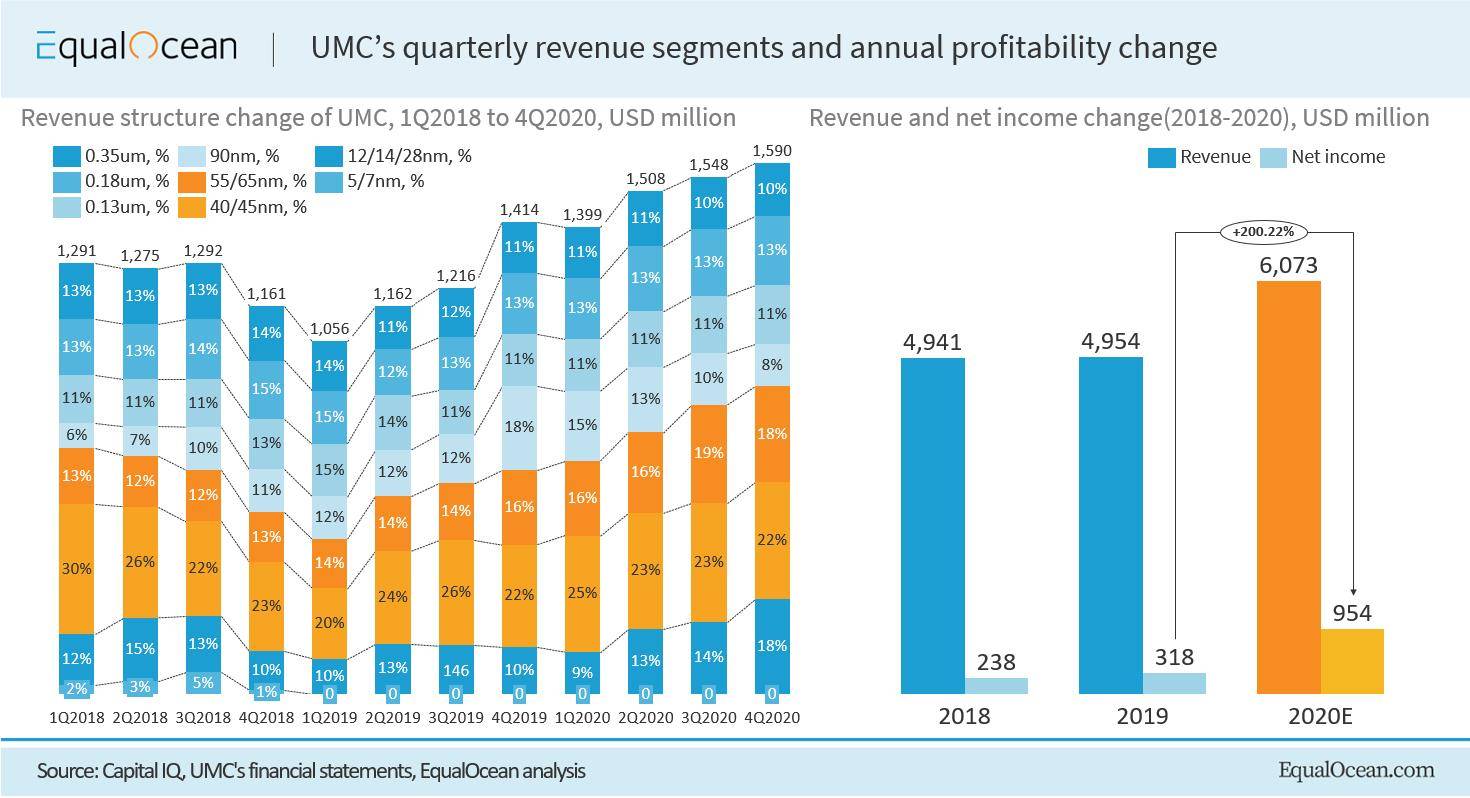 The high cost of developing advanced processors is always a major concern for all semiconductor-related companies. According to the data from Globalfoundries, the capital expenditure of building a more leading-edge fab is expected to increase from 25% to 50%. Once the production line's manufacturing process and wafer size are determined, it is usually impossible to change. When a company wants to upgrade its production line, its fab has to purchase new manufacturing equipment, resulting in a huge amount of depreciation and amortization. These factors will adversely impact its cash flow and overall financial performance.

Compared with the advanced processor technology, the mature nodes technology has more diversified demands, including sensors, microcontrollers, power management, RF, and MEMS. UMC abandoned advanced technologies to achieve a higher quality rate, lower unit cost, lower leakage, and lower power consumption. As the first and second chart shows, UMC has an upward trend: its net margin and gross margin have increased by 20% in the last quarter. We expect its stock price will further climb when the audited annual financial statement of 2020 is released.

Even though UMC has stopped the research at smaller nodes, it is still facing fierce competition from TSMC, Samsung, Globalfoundries, and SMIC, since they share several large clients globally. TSMC occupies 55.6% of the market share while UMC only takes 6.9%. TSMC's mature node shipments and productions are also larger than those of UMC. From the perspective of capacity, TSMC and Samsung Foundry have more than three times monthly capacity than UMC. Also, there is no evidence UMC will establish new fabs in the short term. Due to a recent capacity shortage, UMC's growth might be impeded in 2021.

However, we must note that UMC has two major advantages: firstly, it has a solid technology foundation, with a no-cutting-edge strategy. Specifically, its R&D research is far less than that of its competitors, even considering its large capacity and shipments. Secondly, its fabs are located worldwide and more geographically diversified than those of its competitors. This advantage helps the company avoid political, supply chain, and other risks. In terms of revenue segments, we found that the advanced nodes contribute about half of the total revenue of TSMC (we believe this proportion is somewhat similar in Samsung's foundry business, though they haven't released any data to date). 14/28nm nodes take the largest proportion of UMC's and SMIC's revenue (Globalfoundries likely has a similar structure). Further considering their capacity, in the foundry sector, we think Samsung and TSMC form a direct competition, while UMC, Globalfoundries, and SMIC form another direct competition. 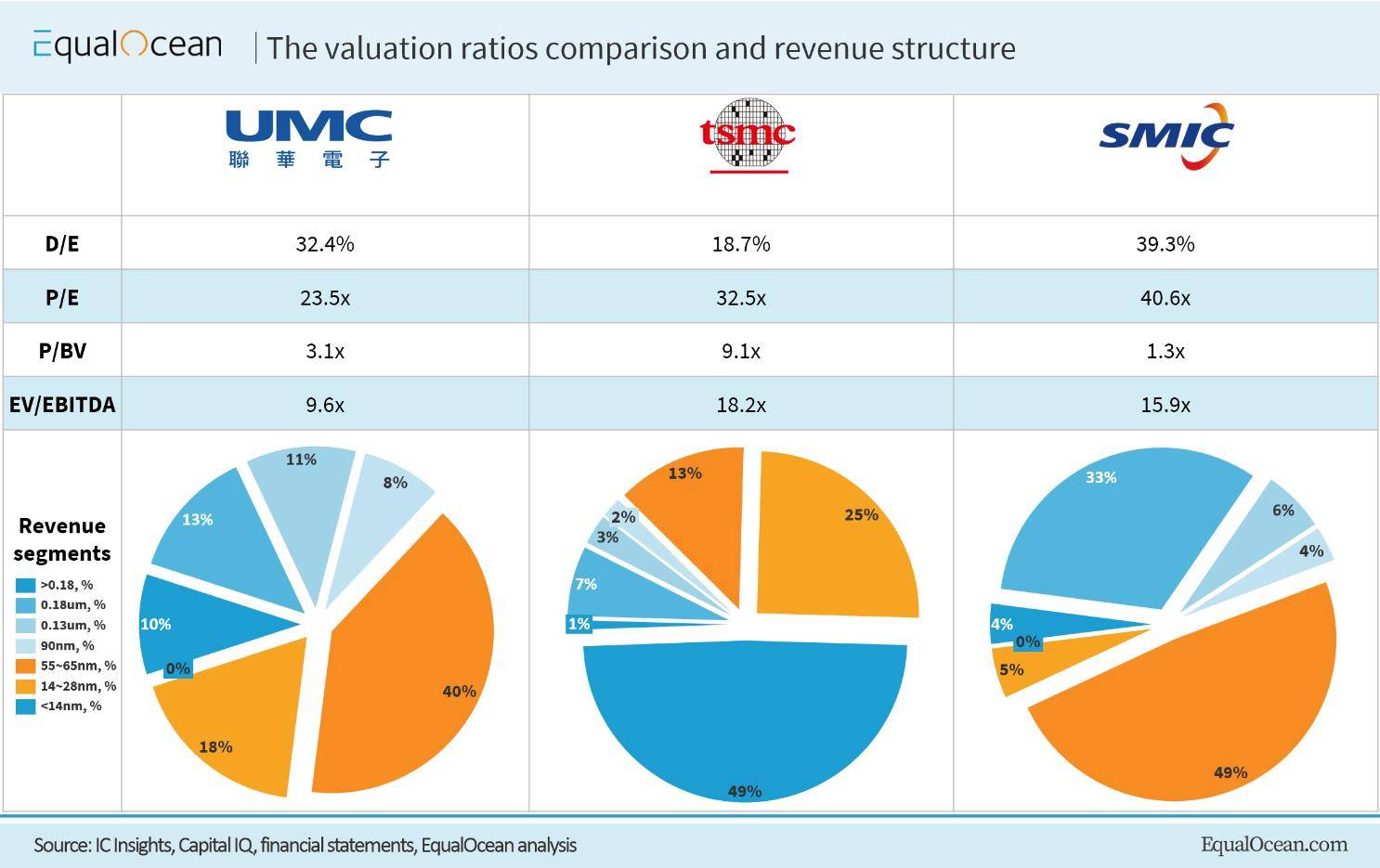 We compared UMC with its two public competitors with foundry-only businesses, TSMC and SMIC. UMC's P/E and EV/EBITDA ratio are favorable to the two.

We expect UMC's P/E to reach 40x by the end of 2021. Per some industry sources, the company is planning to expand its capacity (by establishing fabs or refine mature nodes technology, even though there is no evidence). In this scenario, the ratio can reach 47x, the same level as in June 2019. This allows us to set USD 12.80 apiece as a target price for UMC. This is 30% higher than its close price on Feb 26, 2021.

1. UMC's largest risk factor is the fierce competition in the mature nodes market, especially with Globalfoundries and SMIC. This was not obvious until recently, due to the lack of capacity globally. When international investors calmed down in the EV sector, UMC may face the risk of price war and low profitability. [Risk: High]

2. Political risk also draws attention. In the context of a less-integrated Sino-American trade relationship, UMC may suffer financial losses. A federal grand jury indicted UMC for stealing trade secrets of Micron Technology, in which they were aided by a state-owned company of China, Fujian Jinhua, in 2018. UMC pleaded guilty to criminal trade secret theft and was sentenced to pay a USD 60 million fine in October 2020. The company has come down on one side in the trade war, and it may lose some market share from mainland China soon. [Risk: Mid]