EVE Energy even obtained a positive return during the COVID-19 pandemic when most firms showed negative profits. This might be largely due to its investment in other niche industries, which gave the firm ample rewards. 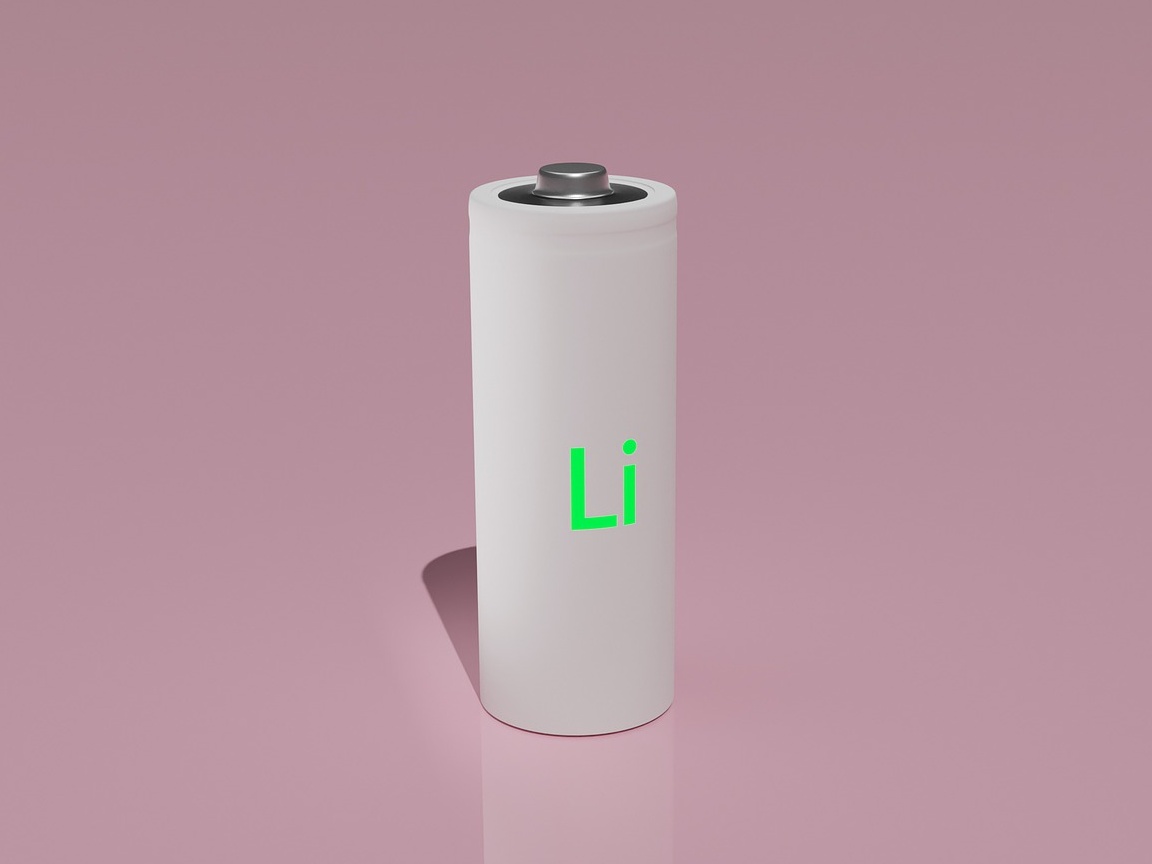 ► As a tier-one firm to provide batteries, EVE Energy is actively expanding its businesses. The lithium battery arm could be seen as an example, which then led to the firm’s investment in electronic cigarettes.

► Except for returns from its investments, its R&D ability and its scale of production also helped to increase its profitability.

COVID-19 caused many firms and industries to postpone their work, which further decreased their total revenues. However, EVE Energy has performed well under the pressure of COVID-19; there was even an increase of about 19.2% in its operating income. This may be due to its early investment in electronic cigarettes, which contributed CNY 0.1 billion to its profits.

Set up in 2001 around its core business – lithium batteries – EVE Energy has gradually become a global battery provider with operating income surpassing CNY 7.4 billion by the end of 2019. Based on the support from the primary lithium battery’s good returns, the firm started expanding its businesses to consumer lithium ions and power lithium ions in 2010. 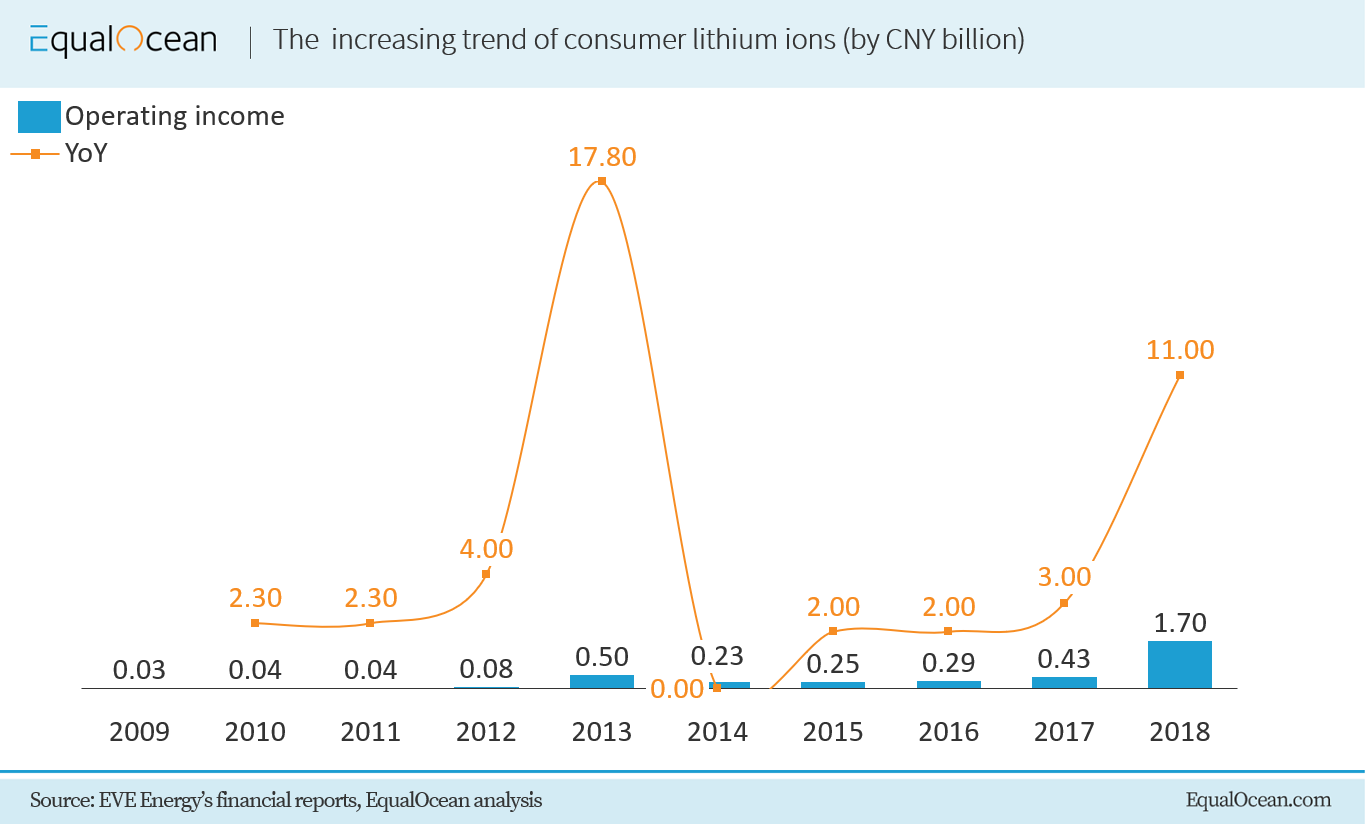 Except for its self-developed consumer lithium ions, the downstream client – Vaporesso should not be ignored either. Its primary businesses are E-cigarettes and the production of electrical atomizing units. With the normalization of electronic cigarettes, EVE Energy thought Vaporesso could have a promising future, so it bought 50.1% shares from the E-cigarette makers for CNY 0.44 billion in 2014. After two years, Vaporesso’s operating income had increased three times, to CNY 0.72 billion in 2016, and maintained a dramatic rise until 2019. Specifically, two main causes contribute to its good performance. Firstly, loyal international clients. Japan Tobacco and Philip Morris U.S.A both have deep development insights in all aspects of tobacco products. Secondly, strong R&D. It was the first to issue ceramic atomizers and became the tier-one original design manufacturer in 2018. 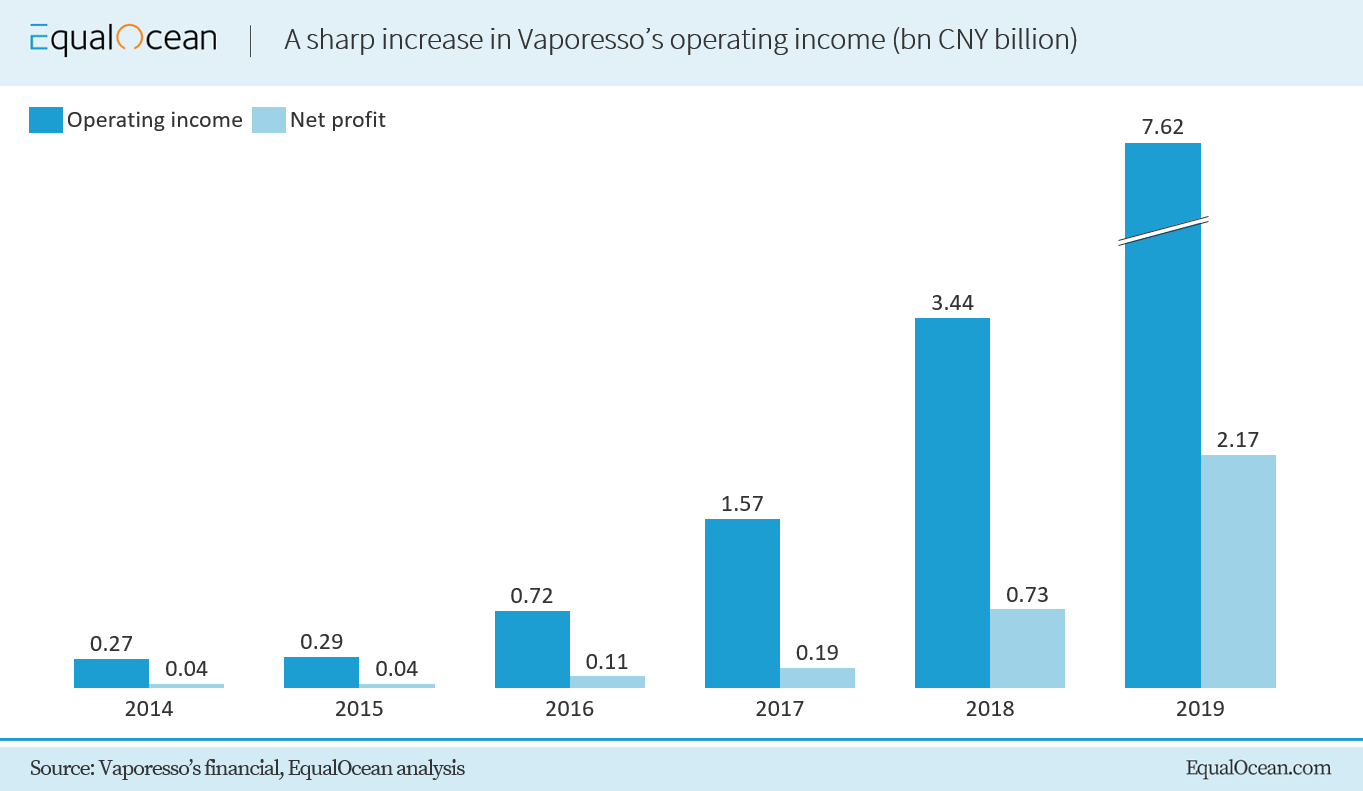 When it comes to the power battery, this is EVE Energy’s largest investment area, especially for R&D human capital and fixed capitals. This may be due to the inevitable trend of the rise of electric vehicles, as the output of global power batteries reached 128GWh in 2019, an increase of 20%. Moreover, according to GGII, the domestic need is supposed to get 310 GWh, and the global 635GWh. By contrast, this massive investment also exerted a negative effect on the firm’s financial reports. To be more precise, this financial cost led to CNY 0.1 billion lost in EVE Energy’s 2018 financial report. But with an increasing order volume in lithium iron and Li-Ion battery, the power battery segment is expected to earn profits in 2020. 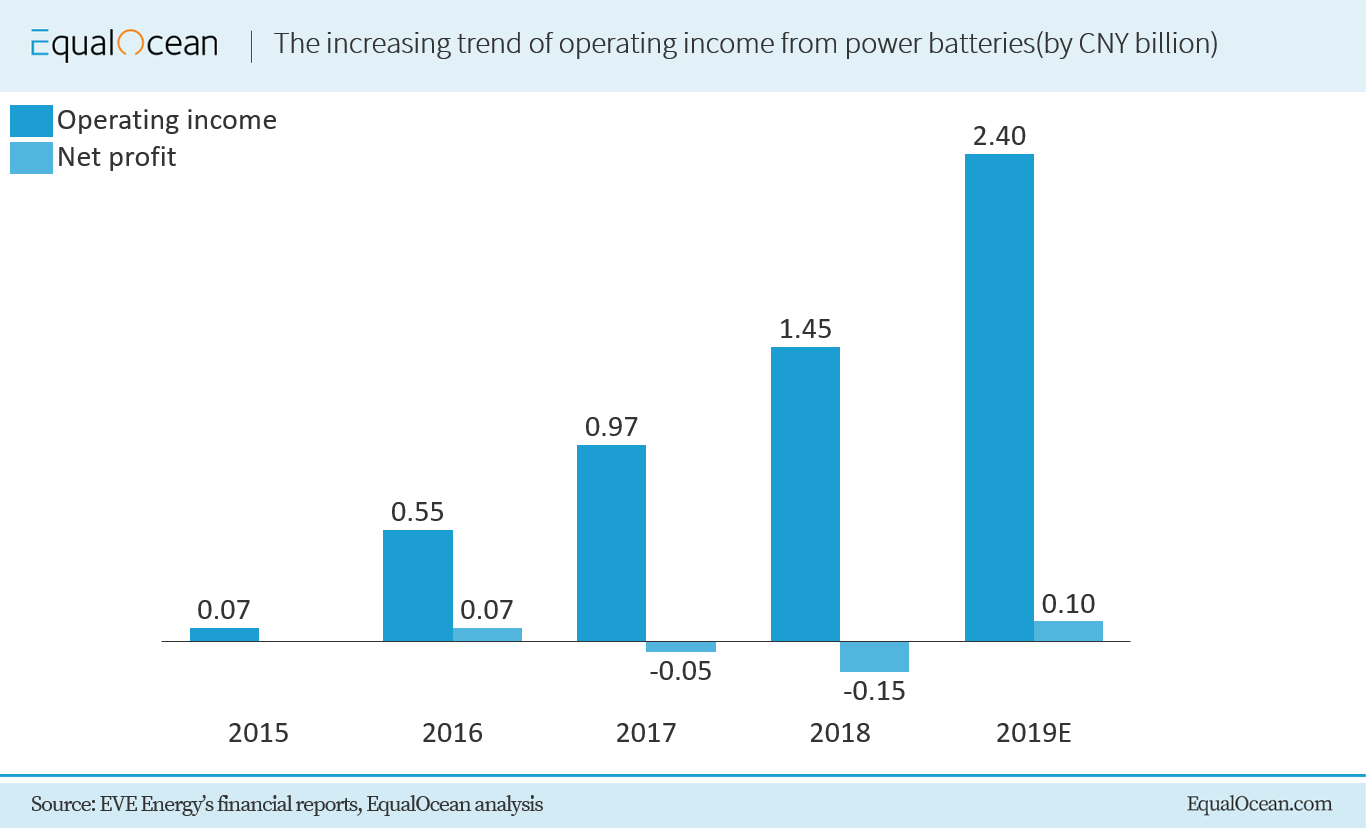 Except for EVE Energy’s foresight about the investment strategy, the increasing demand from the Internet of Things (IoT) also contributes to its success. For instance, the downstream industry, such as home decoration and digital consumption, is also showing the high demand for a lithium battery. Moreover, the lithium battery firm is forming a more robust system of electrochemical materials, which supports the firm’s quick reaction to its downstream markets. With the boom in IoT, many things need to be matched with batteries. For instance, in the low power consumption battery, 40%~50% of them need lithium batteries. Furthermore, the rising speed in the lithium battery segment will change from 5% to 10% accordingly. 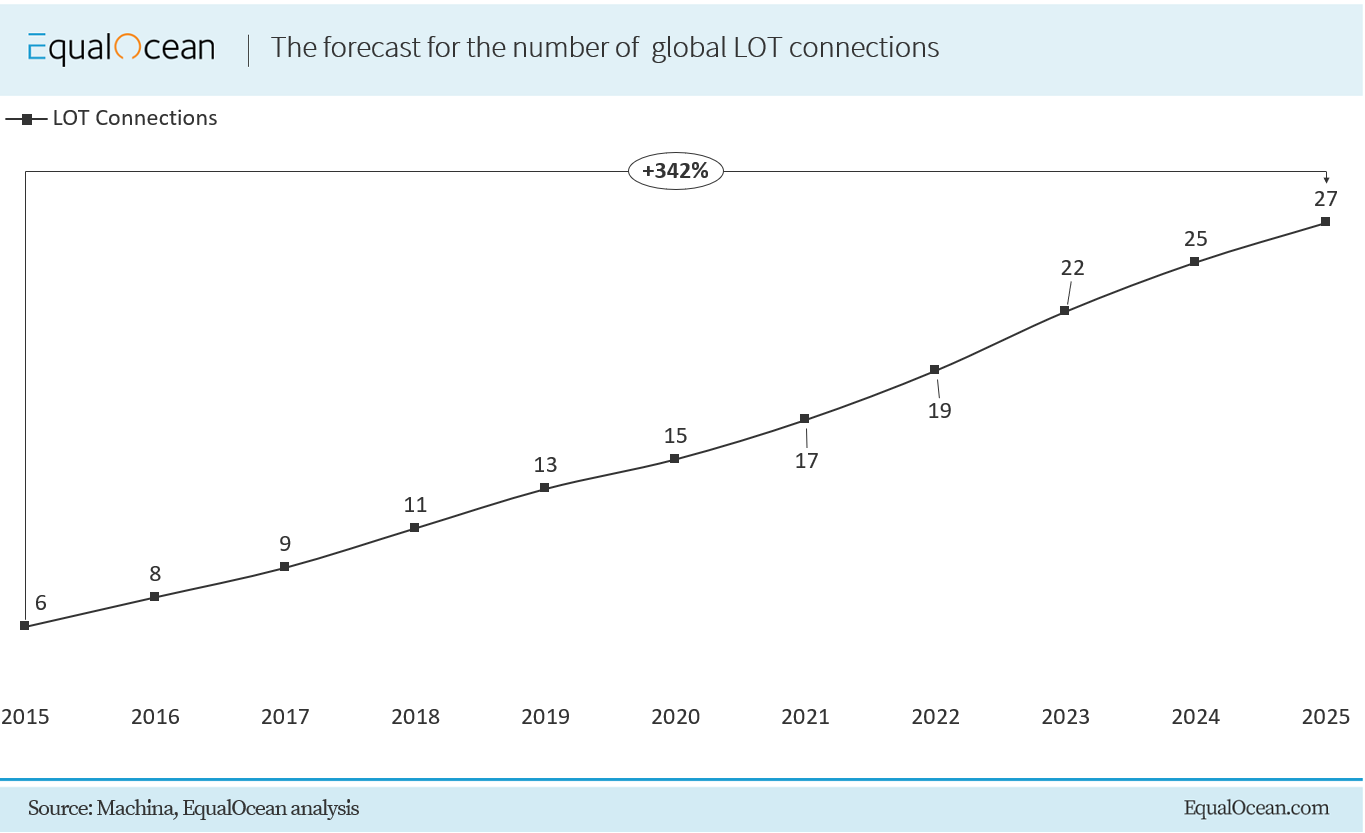 Not only do external factors such as LOT contribute to EVE Energy’s rapid increase, but the internal factors should be ignored either. To be more precise, the firm has strengths in the R&D and its scale of production. As for its technological superiority, it is reflected in the number of patents. For instance, the firm has applied for 1724 national patents, including 757 efficient patents. Furthermore, the firm’s average R&D expense ratio is about 7.19%, surpassing 3%. As WTIOP said, high-tech firms with sales volume over CNY 200 million are supposed to have an expense ratio of over 3%. While,  for the firm’s scale of production, its productivity production has achieved a specific size so far, building a battery production line for square lithium iron phosphate batteries (方形磷酸铁锂电池), soft pack ternary battery (软包三元电池) and square ternary battery (方形三元电池).

In a word, EVE Energy’s rapid growth results from its self-development and the increasing demand from rising LOT. The equipment manufacturer is trying its best to improve the R&D ability, building a comparatively strong foundation for its consumer lithium ions and power lithium ions. In addition, its investment in electronic cigarettes and power batteries also plays an essential role in its growing income. There is an expectation that the firm will expand its investment field in the future, further accelerating its development.

CONTACT US
Scan QR code to contact us for professional consulting services
Next article
Third-Party Data Center Firm GDS: On the Way to Becoming 'China's Equinix'