Wuliangye: Yet to Reach Moutai's Level – But Still a Good Bet for 'Luzhou' [1/2]

Liquor stocks are flying high in the sky – will Wuliangye ride the wave? 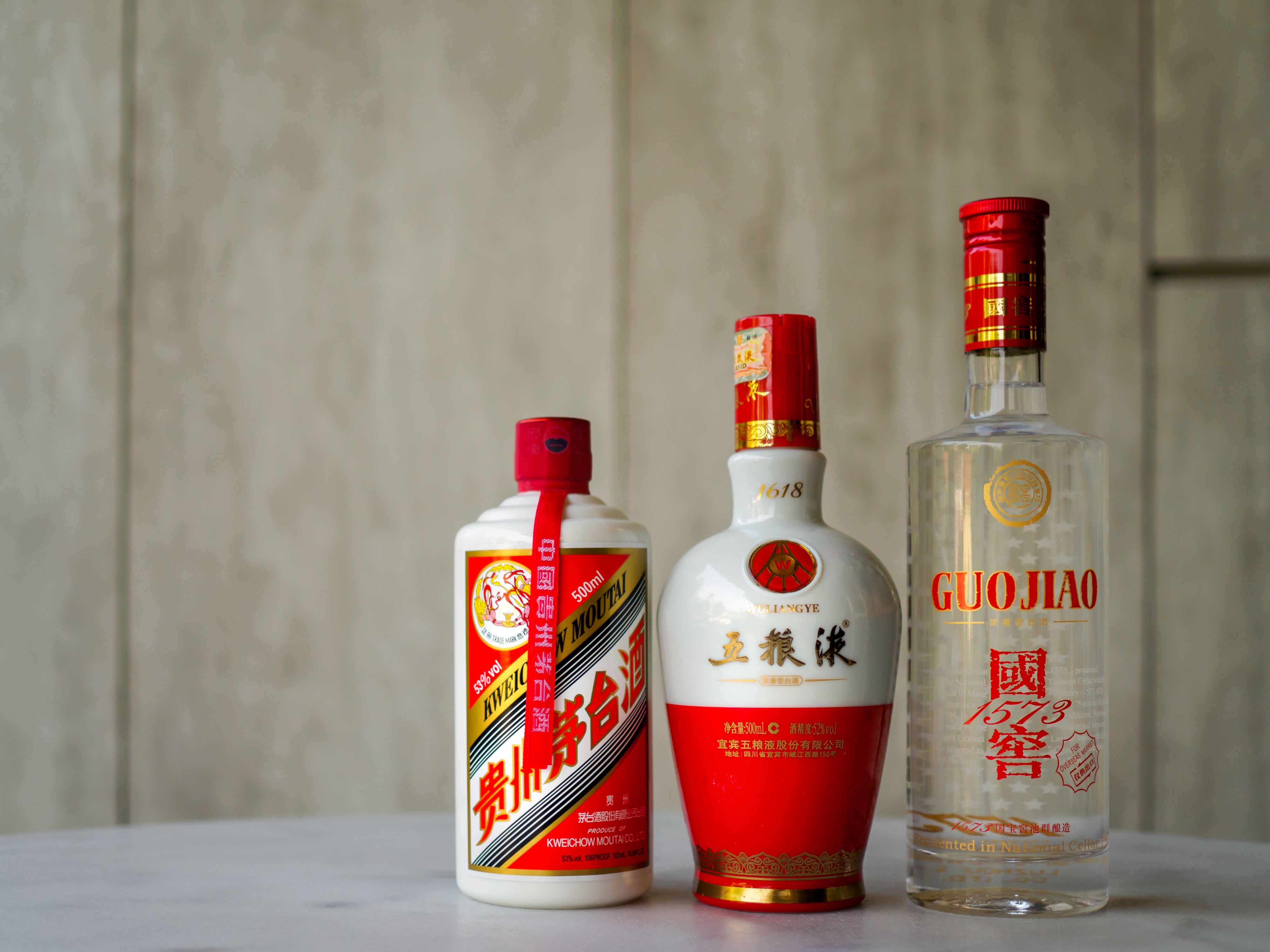 ► For Wuliangye, some of the problems stem from having the wrong product and pricing strategy. The strategy of promoting multiple brands instead of focusing on one single killer product turns out to have blurred the brand positioning, making it lose the first place in the liquor industry.
► Weaker pricing power vs. Moutai due to having less controlling power to downstream sales channels. Customers can get a bottle of Wuliangye for a discount price of CNY 1,058 on Tmall. Still, they cannot enjoy Moutai even for CNY 2,500, which further leads to an inefficient room for appreciation.
► The storage and appreciation value of Wuliangye's ‘Luzhou-flavor’ characteristics are not comparable to what  Moutai’s ‘sauce-flavor’ liquors possess.
► Nevertheless, Wuliangye is on the path to becoming dominant in the Luzhou-flavor category as the Concentration Ratio (CR) is lower in the class compared to where Moutai stands.
► Two challenges are lingering. 1. Inefficient production capacity. It is more challenging to increase the production capacity of Luzhou-flavor liquor than the sauce-flavor type. 2. Diversification strategy applies pressure to the bottom line; new initiatives in automotive and chips are yet to turn profitable.

With the increase of national disposable income, Chinese consumers have been increasing their purchases of high-quality consumer products. Local Chinese brands rose along the way, such as home appliance companies (Gree, Midea). The ancient Chinese beverage has a history as long as tea – and it is likewise appreciated and chased by the consumers. High-end liquor brands with extravagant prices have gradually changed from a standard consumer product to a symbol of wealth and status. In 2019, high-end, sub-high-end, mid-end and low-end liquors accounted for 18%, 5%, 43%, and 34% of the liquor market, respectively. According to the forecast of Qianzhan, the market share of high-end liquor will reach 40% in 2029.

As the representative of Luzhou-flavor, Wuliangye (000858:SZ) is the second biggest giant with a market cap of CNY 848 billion in the liquor industry. The company generated 92.39% revenue from selling liquors, of which high-end liquors accounted for 85.68% of the total in 2019. With stock price quadrupled in the past three years, Wuliangye is still yet to be the next Kweichow Moutai (600519:SH), the representative of sauce-flavor liquor with a market cap of CNY 2 trillion.

The multi-brand strategy and OEM model put disadvantages on company branding and makes it difficult to gain a foothold in the high-end market. Luzhou-flavor liquor product mix contains less high-end liquors and more low-end liquors, which are hard to blend.

Wuliangye adopted the OEM model and the dealership model in the early 1990s, forming numerous sub-brands to produce and sell more low-end liquors. This model made a considerable contribution to Wuliangye's early sales, and, in 2010-2012, revenue almost doubled. Wuliangye had not controlled dealers over branding and marketing and dealers were more attached to their benefits and made decisions based on that.  It created confusion in the market and was terrible in terms of customer awareness. The poorly operated sub-brands have severely weakened the value of the killer product. In 2012-2015, revenue and net profit continued to decline. 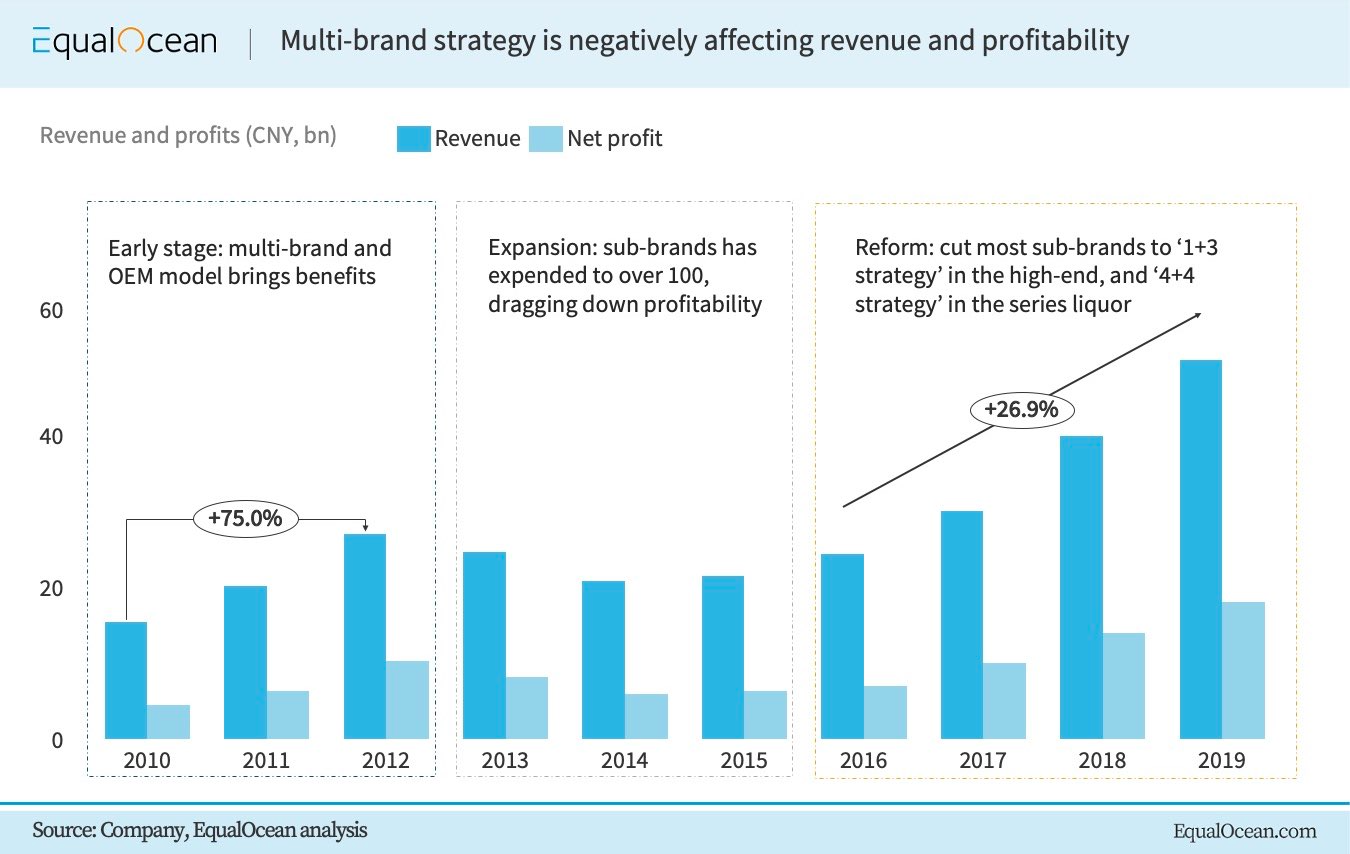 Starting from 2017, Li Shuguang, Chairman of Wuliangye, began to focus on Wuliangye's leading brand and to be back on the right track. Net profit saw a compounded annual growth rate of 27% in the past four years.

In contrast, Moutai has always adhered to the high-end boutique route, and after 2007, its revenue and profit and terminal prices surpassed those of Wuliangye all the way. So far, the terminal price of Moutai is twice that of Wuliangye, reaching CNY 2,500.

Although Wuliangye's operating conditions are improving, due to a midway strategy error, this liquor giant, which was far ahead of Kweichow Moutai at the very beginning, missed the opportunity to secure the first place. At present, the market value of Moutai surpassed the GDP of Guizhou Province in 2019. As a result, Wuliangye can't catch up.

The diversification strategy drags down overall performance. Since 2002, Wuliangye has been diversifying and expanding, entering the industry, including but not limited to the automobile manufacturing and chip industries. But so far, only the car business continues. In 2019, Wuliangye released its first car, and the model and design were unable to attract consumers, resulting in a blurred future. 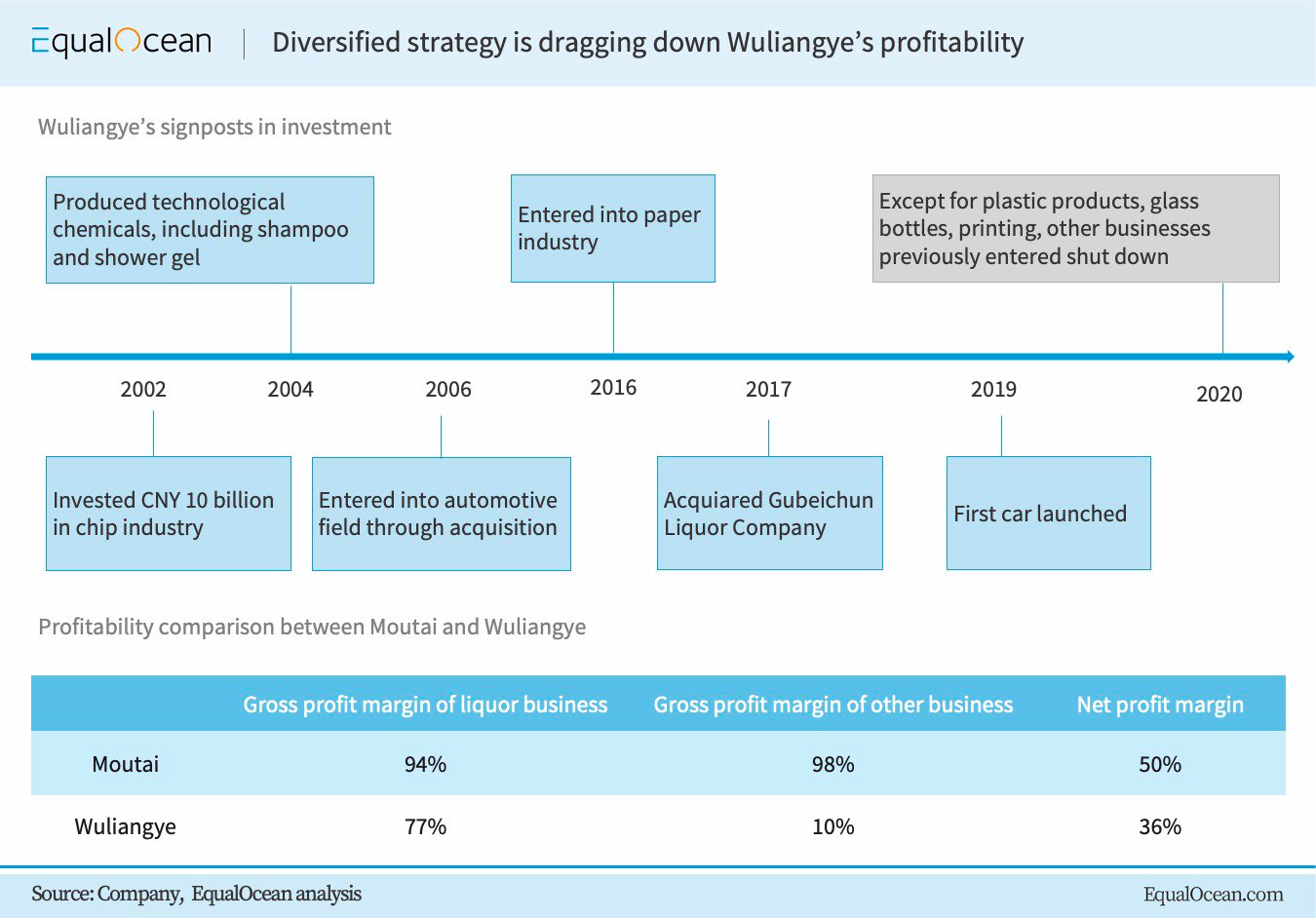 The gross profit margins of Wuliangye's liquor business and other businesses are only 77% and 10%, which are far lower than Moutai's 94% and 99%. The investment in unrelated companies further reduced the net profit margin of this second-giant to 36%. From the profitability perspective, Wuliangye will not catch up with Moutai in the short term.

The storage value of Wuliangye is lower than that of Moutai. The longer the storage time, the more mellow the taste of liquor. Wuliangye, as a Luzhou-flavor liquor, gives the best drinking experience in ten years, while Moutai, as a sauce-flavor liquor, tastes better in about twenty years. Moutai's inventory turnover is 1181, and only 358 for Wuliangye. Therefore, Wuliangye's Luzhou-flavor characteristics are lost on the starting line.

The value-added potential is not as good as Moutai’s. Social occasions are even more inseparable from liquors. The price of liquors has been getting higher and higher with fast speed, making Moutai a conspicuous consumption and a financial speculation institution at the same time.   The current market price of a bottle of Moutai, produced around 2000, is about CNY 6,000, while Wuliangye is less than CNY 2,000. Since 2009, there have been 320 instances of Moutai auction prices exceeding CNY 1 million, while only four occasions have seen Wuliangye auction prices exceed CNY 1 million. 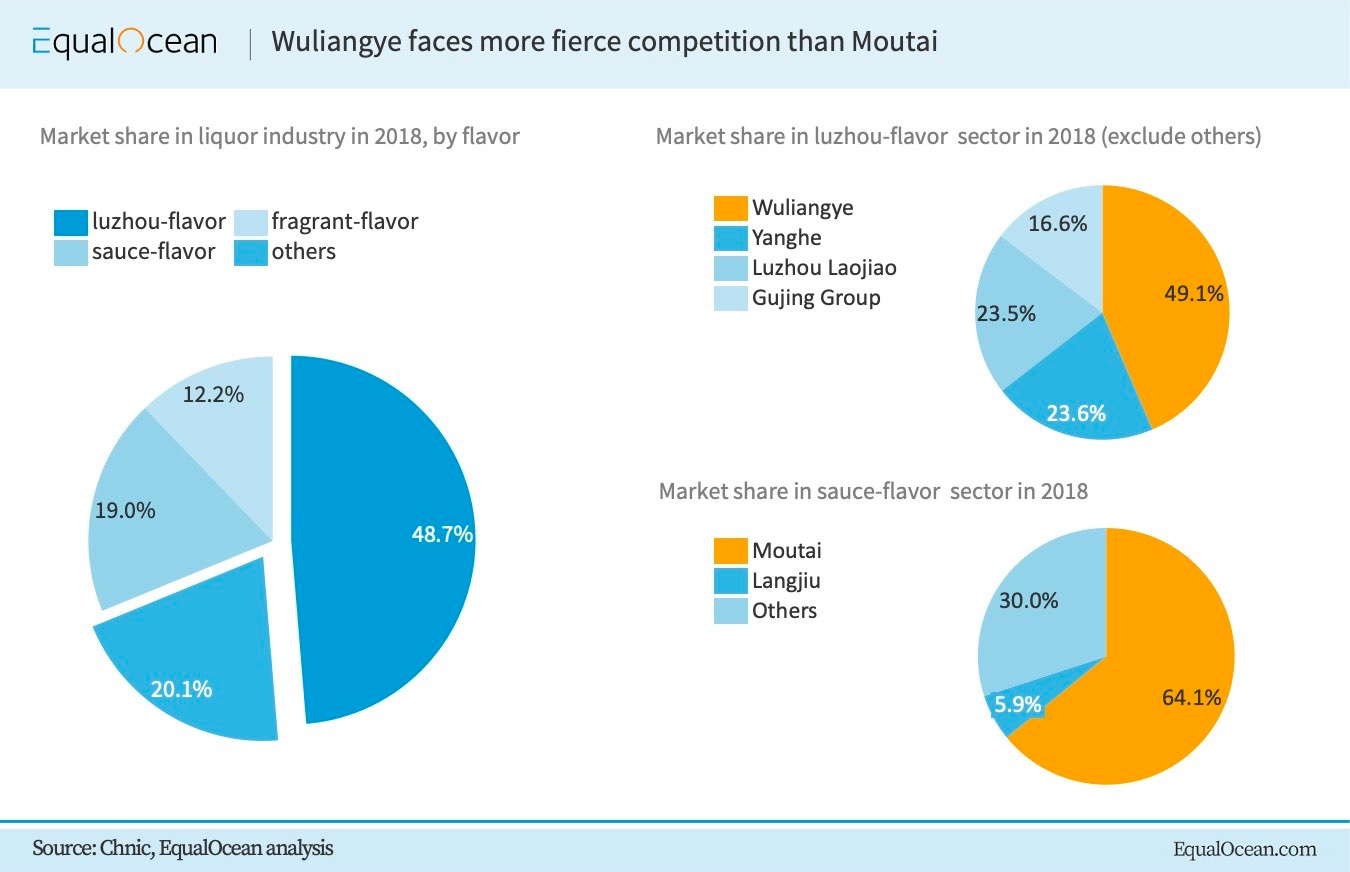 Brutal competition makes Wuliangye's moat not as comprehensive as Moutai's. Therefore, it is difficult for Wuliangye to stand out as a candidate to be a ‘second’ Moutai.

The pricing power is weaker than Moutai. Tmall showed that Wuliangye's eighth-generation, a high-end liquor, was priced at CNY 1,358, but the discounted price was CNY 1,058. On the contrary, Feitian Moutai, with a retail price of CNY 2,500, has always been in short supply, given that the retail price is nearly double the original price of CNY 1,499.

The MSRP of Feitian Moutai is CNY 969 and CNY 1,499, with the premium close to 55%. However, these two prices of Wuliangye are set at CNY 889 and CNY 1,199. Customers can even get a bottle of Wuliangye for CNY 1,169 in JD. From the perspective of pricing and supply and demand, Moutai has become a status symbol, but Wuliangye is still far away.

Due to the different brewing processes, as long as there is a suitable factory for sauce-flavored liquor, the production can be expanded and the production capacity can be formed in 5 years. Luzhou-flavor high-end liquors can only be produced with high-quality base liquor made in old pits, and pits that have been used continuously for more than 30 years can be called old holes. Therefore, the high-end production capacity of Luzhou-flavor liquor cannot be increased immediately within a few years.

At the same time, for every 1 ton of Luzhou-flavor high-end liquors produced, 8 tons of middle and low-end liquors will be made, which will affect the brand value.

Combined with all factors stated above together, Wuliangye cannot sit on an equal footing with Moutai, and the gap will even widen further because of its disadvantage in the Luzhou-flavored circuit.

This is the first part of our analysis of the gap between Moutai and Wuliangye. Continue to part II where we study whether the stock is worth investing in.

CONTACT US
Scan QR code to contact us for professional consulting services
Next article
Xpeng: Can a New Idea Challenge Tesla? – Initiate with Neutral