The chipmaker’s business outlook in a complex environment. 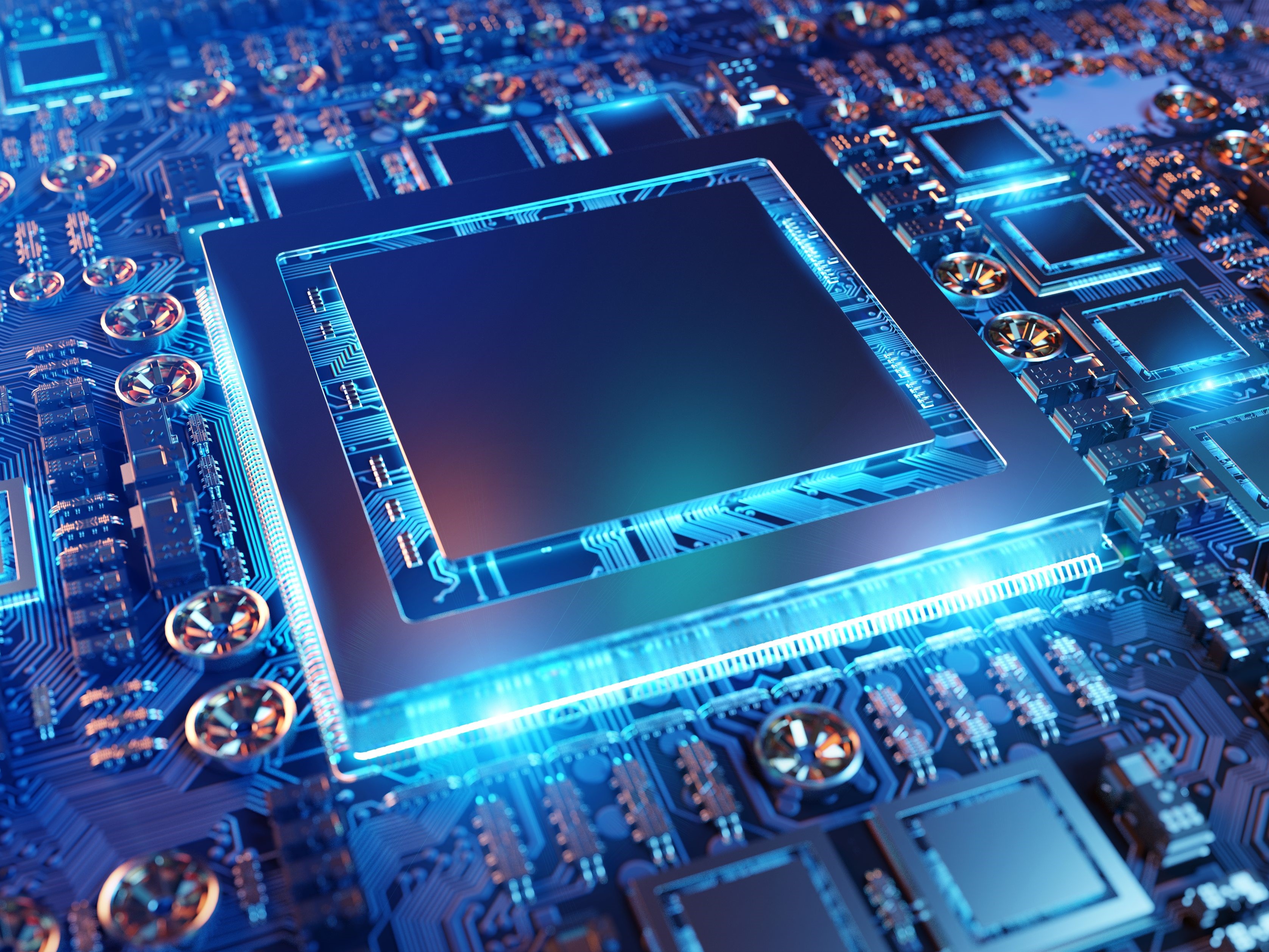 ► AI chips for terminal devices are not likely to be the focus of Cambricon in the near future.
► The company’s growth is likely to come from the sales of cloud and edge AI chips and intelligent computing cluster systems.
► The competition in these new fields is stiff, both countrywide and on a global scale – this will be a hard nut to crack for Cambricon.

On June 23, Cambricon passed the Shanghai Stock Exchange Listing Committee’s review and is now expected to start trading on the Star Market in July. This article reveals the chipmaker’s product mix, its key problems and its role in China’s semiconductor renaissance.

Founded in 2016, Cambricon is a company focusing on the research and development of AI chips for cloud, edge and terminal application scenarios.

Its revenue structure has so far been somewhat imbalanced. According to the prospectus, the biggest changes of its revenue structure came in 2017 and 2018 – over 98% of company revenues then came from the intelligent terminal processors’ IP business. While, in 2019, the intelligent computing cluster business became the main constituent of revenues, followed by cloud intelligent chips and accelerator business. Below, we describe each of Cambricon’s businesses. 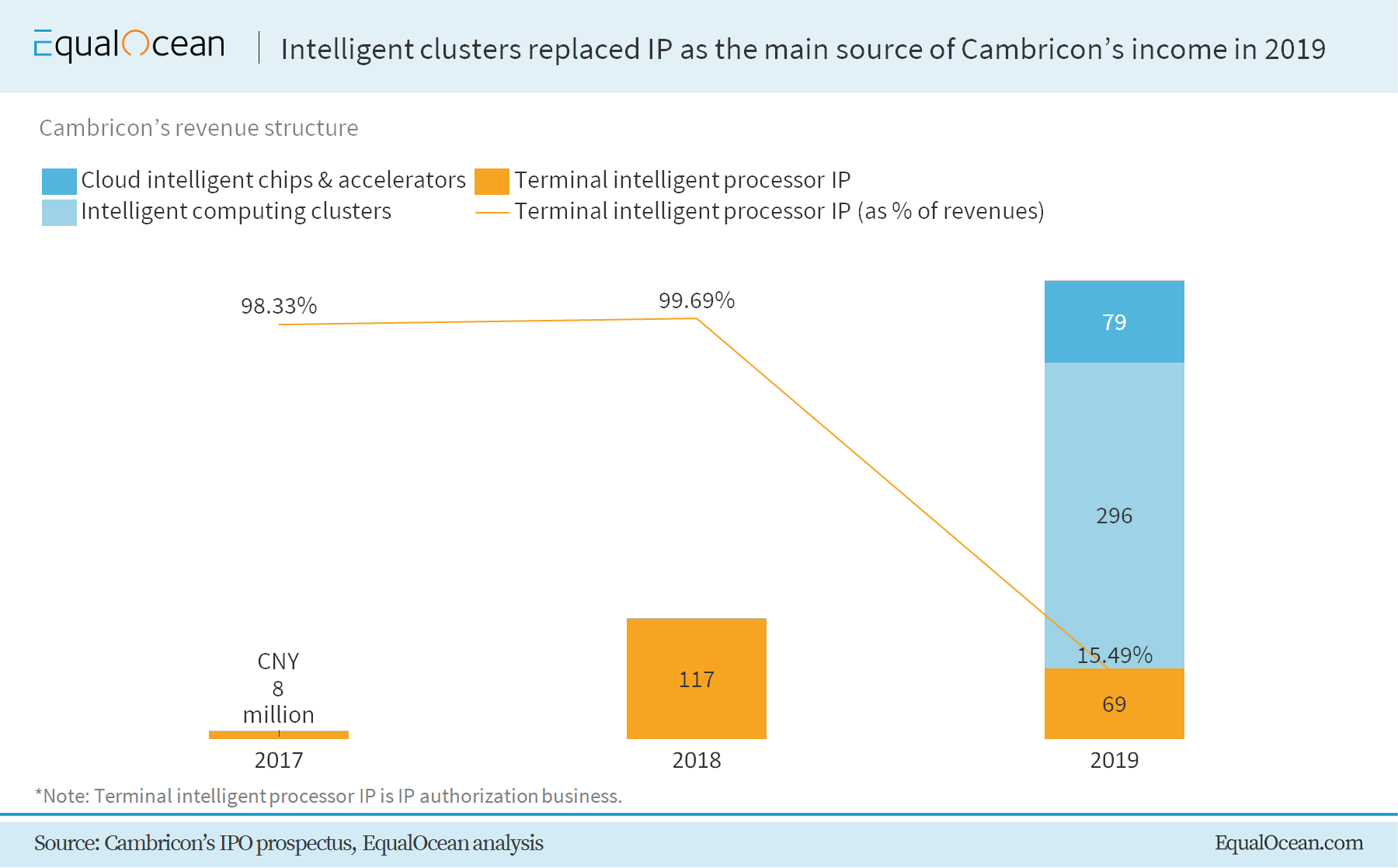 The terminal intelligent processor IP business (primarily, Cambricon 1A, 1H and 1M series) was the only significant source of the company's income in 2017 and 2018.

Cambricon’s former-largest client accounted for 98.34% and 97.63% of operating revenues in 2017 and 2018 respectively. Huawei signed four contracts with the company, three of which were completed in 2018; the last one was due at the end of 2019. Since that, the telecom equipment giant hasn’t placed any orders with Cambricon, as it started building IP for its System-on-a-Chip (SoC) series, Kirin, in-house in the second half of 2019.

The quest for self-sufficiency is an industry-wide trend. Not only Huawei but also Apple (AAPL:Nasdaq) is now designing chips by itself to better match requirements for product performance. Other Chinese companies (like vivo and OPPO, for example) have stable relationships with the likes of Qualcomm (QCOM:Nasdaq.) Unless the United States government starts to prohibit the supply, there is no reason for those vendors to replace the original partner with local entities.

Most probably, the IP-related revenues of Cambricon will not increase in both absolute and relative terms in 2019.

In addition to processors for the terminal, Cambricon also designs AI chips for the cloud, including MLU 100, 270 and 290.

In the cloud, servers and data centers need to process a large amount of raw data, which has high requirements for computing power and data storage of basic hardware. The demand for data center services is growing fast.

According to IDC data, the scale of China's smart server market in 2018 was USD 1.31 billion, with a year-on-year increase of 131%, and will reach USD 4.33 billion by 2023. The overall CAGR of the market will reach 27.08%. Considering that the budget of AI chips accounts for 30%-35% of the cost of AI servers, the future demand for AI chips in the Chinese server market is expected to exceed CNY 10 billion. 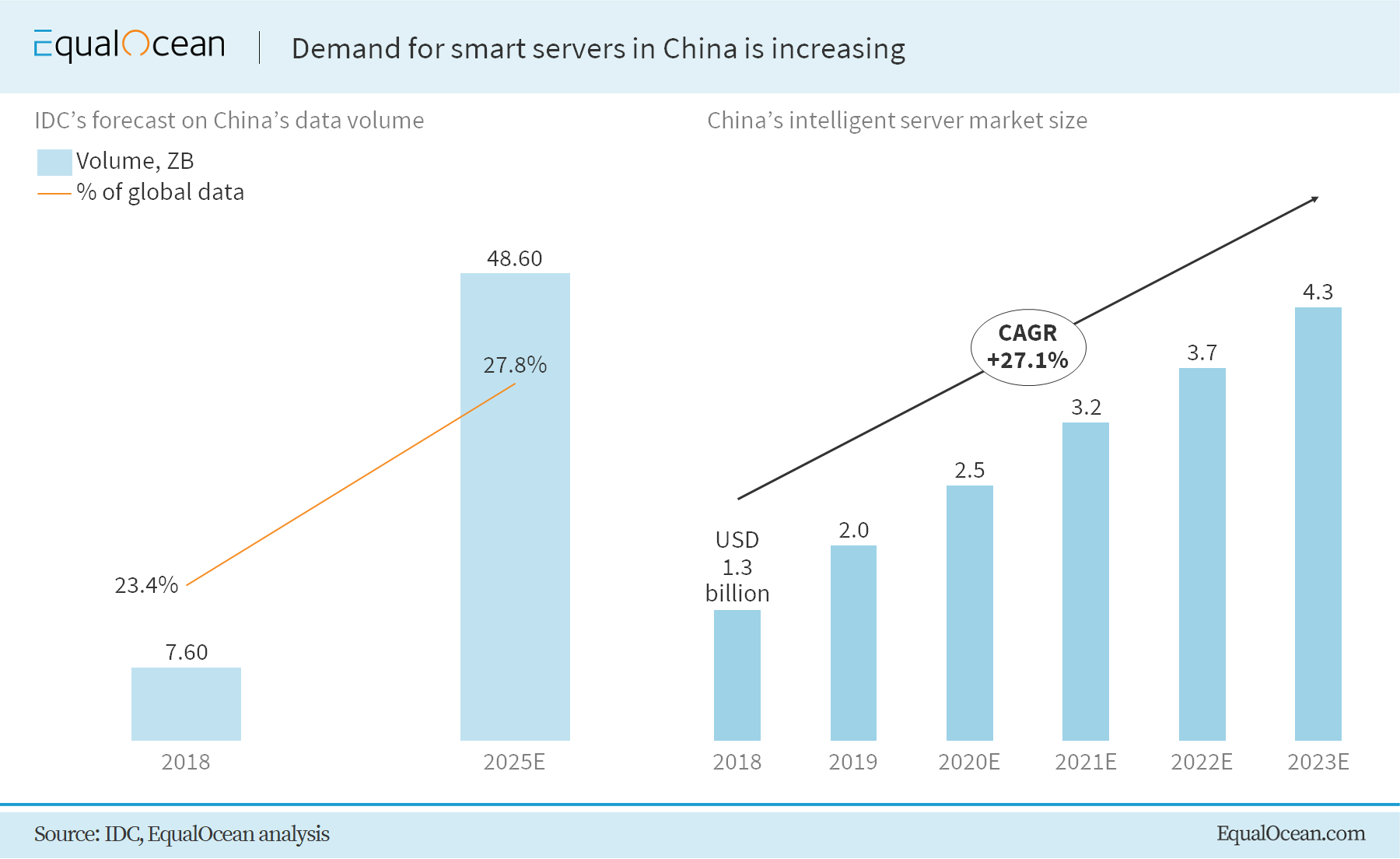 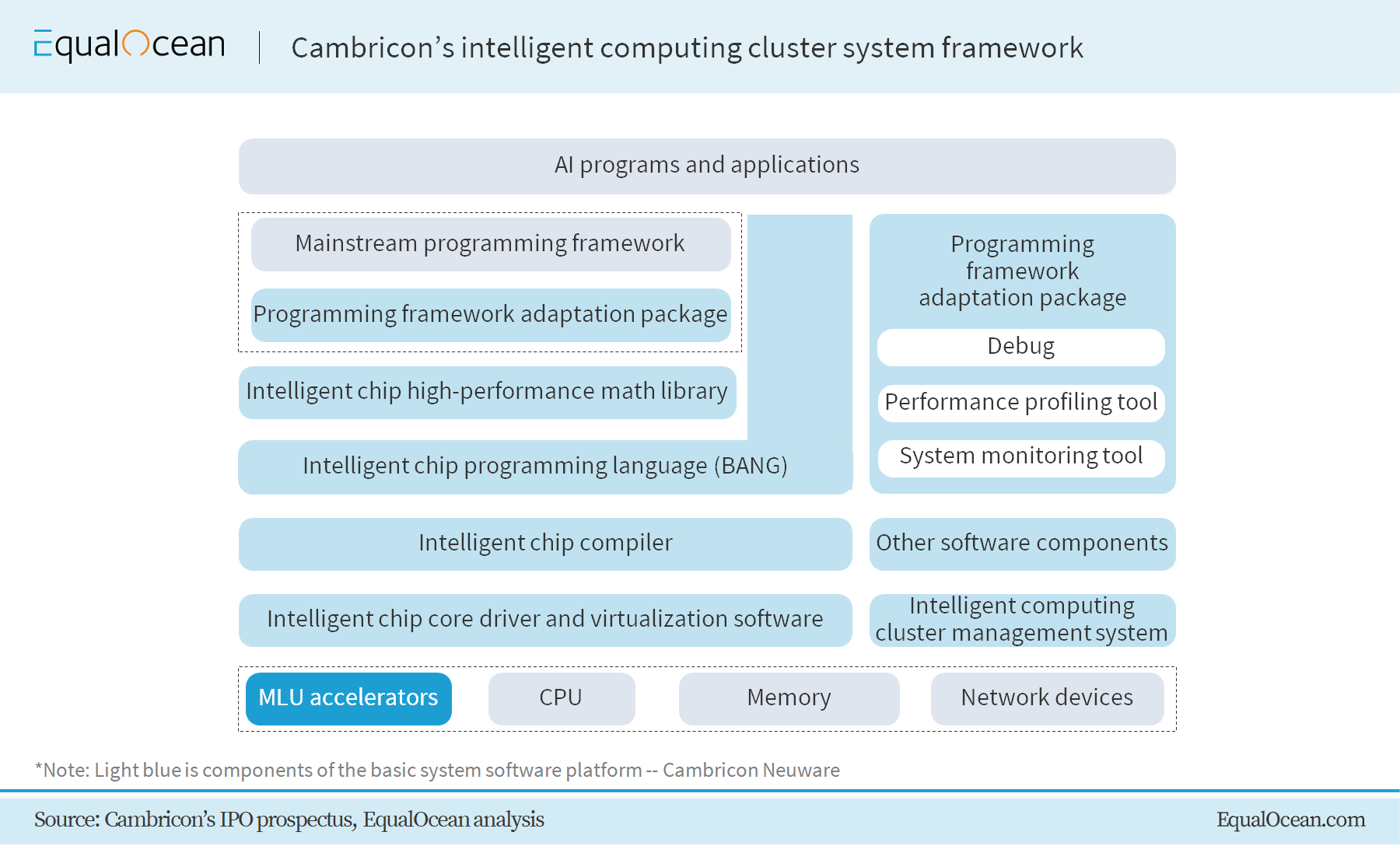 In November 2019, Cambricon launched MLU 220, an AI acceleration product dedicated to edge computing application scenarios. On the one hand, edge computing can effectively make up for the disadvantage of the insufficient computing power of terminal devices. On the other hand, it can alleviate potential problems such as data security, privacy protection, bandwidth and delay in cloud computing scenarios.

The combination of edge computing and AI technology is widely deemed to be helpful in the development of smart manufacturing, retail, education, home IoT, energy management, transportation and other fields.

At the edge side, with the rapid commercialization of 5G in China, various supporting industries in the 5G industry will usher in opportunities for rapid development, and application industries such as V2X, Industrial Internet and Internet of Things will gradually enter a new stage of development. According to CCID Consulting, China’s edge computing market will reach CNY 32.53 billion by 2022.

Noticing the value of edge AI chips, major semiconductor companies have entered the area. For instance, Nvidia launched the Xavier NX in November 2019 and Huawei’s Ascend, the computing power of which is 8TOPS. As a new niche player in this field, Cambricon does not seem to have any competitive advantage.

Cambricon as a part of China’s big semiconductor story

Since the US launched stricter bans on Huawei, more attention has been paid to the domestic semiconductor industry. The Shanghai bourse’s new tech board is becoming a great channel for financing for those high-tech companies.

For instance, the country’s top foundry SMIC submitted the application for the secondary listing on the Star Market on June 1, passed the registration review on June 22, and will launch trading in July.

With the support of the government, the semiconductor industry is likely to have new development opportunities. However, in contrast to SMIC, Cambricon is an AI chip designer, subject to ever-appearing challenges on both ends of the industry chain – upstream and downstream.

On the supply side, they need IP and EDA authorization from ARM, Synopsys and Cadence. On the customer side, the original largest customer started designing its own chips in-house. It’s hard for them to find a substitute as big as Huawei, or one as reliable and comparatively broad in its pool of terminal users.

Turning to the cloud and the edge, AI chips can help Cambricon achieve new growth opportunities and, indeed, this contributed a lot to its increase in revenues in 2019. The problem is that with the development of IoT, Internet giants are also establishing companies to research and develop AI chips. For example, PingTouGe, Alibaba's wholly-owned chip arm, achieves cloud and terminal technological innovation through software and hardware convergence.

In an industry with high R&D investment requirements, CNY 2.8 billion, which the firm aims to raise this time, can only support Cambricon in the short-term. How to survive in the increasingly competitive market, in the long run, depends on the strategy, product performance and many other aspects. We can say one thing with certainty: it’s not easy.