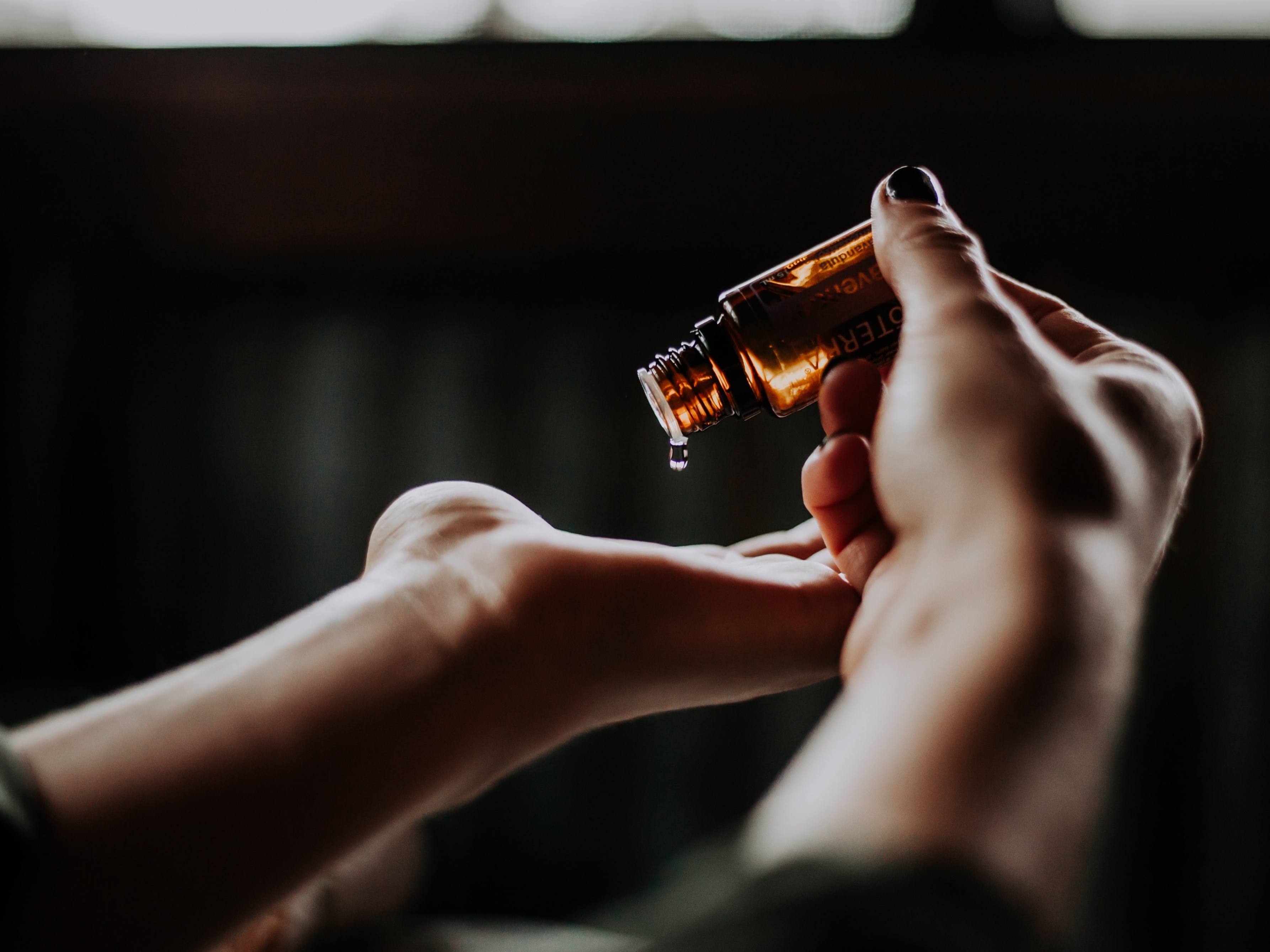 ► Hyaluronic acid (HA) is a critical ingredient in the booming medical cosmetology in China.

► Bloomage Biotech is the first Chinese company that breaks through in fermentation technology to produce HA, with a positive outlook for future growth.

Hyaluronic acid (HA) is not an unfamiliar biotechnological term for many consumers. It has been widely used in many beauty care products available at cosmetic shops. More than this, it is an ingredient with a broad spectrum of applications.

This HA is distributed widely across human and animal bodies, especially in connective, epithelial and neural tissues. As a non-replaceable natural biomaterial, this acid has particularly useful physicochemical properties and starts to deplete as the human body ages. So far, it has been applied in the healthcare, cosmetics and functional foods areas.

The demand for HA in healthcare, especially in the two segments of ophthalmology and orthopedics, is relatively small but growing at an increasing speed. The other two sectors, cosmetics and foods, almost equally share the rest of the production supply. The year 2018 saw a global production amount of 500 tons of hyaluronic acid. 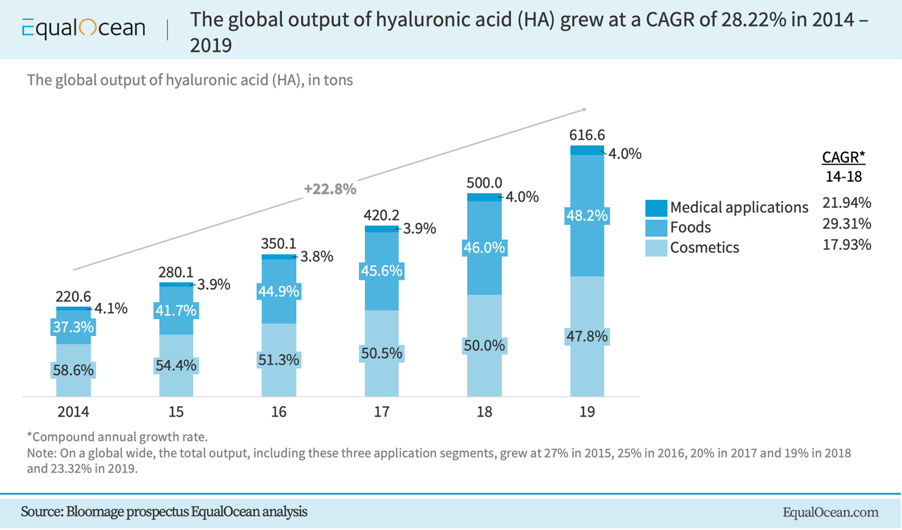 In recent years, the fast development of downstream industries on the application layer has been pushing the market size of HA to grow in parallel. In China, the emergence of the aesthetic medicine industry plays a significant role as an interplay of medical technologies and consumers.

Many traditional beauty care big-name giants such as Proya, L’Oréal, Shiseido (a Japanese cosmetics brand) are faced with challenges from the disruptors at the tech and supply end. Once these key ingredient providers, inventors and manufacturers have developed a distribution network to reach out to end consumers, it is only a matter of time before sales-based cosmetics brands lose their business moats.

And this is the advantage of a biotech-driven cosmetics company like Bloomage, which reaches out to the end-users through hit products.

Bloomage engages in providing raw material products for downstream medical institutes, medical end products and functional skin-care products. The raw material business is the largest revenue source for this biotech company and is also the primary segment where the company is anchored. Based on its self-developed microbiological fermentation technology, Bloomage can produce HA in all kinds of high-end specifications and exports the raw materials to over 40 countries, including Japan, the US and EU members.

A direct impact on the HA-centered manufacturer and provider is a more balanced business revenue structure. 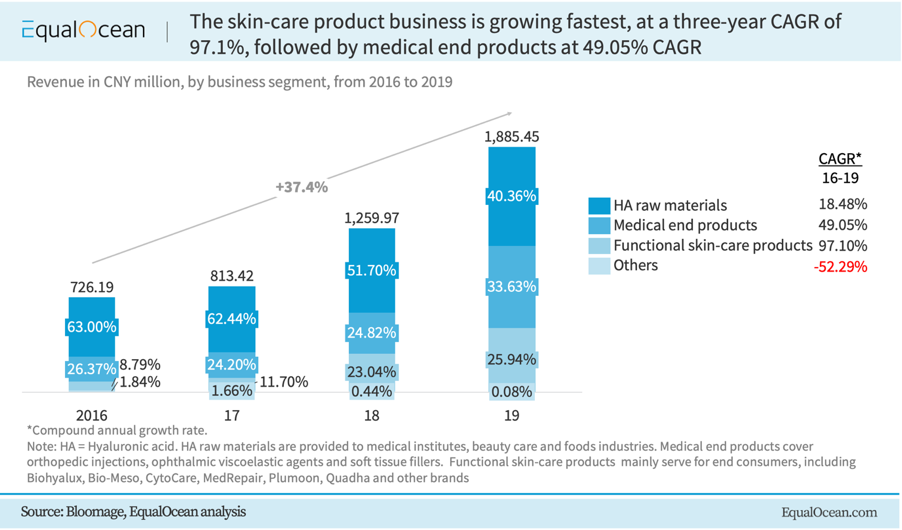 In a look into Bloomage’s clients, the top five names’ weights in the total sales have been decreasing since 2016, from 24.24% to 8.95% in 2019, excluding affiliated companies. On a global scale, the ratio of revenues from outbound areas slightly decreased, to 19.01% in 2019, but the gross margin is relatively stable at somewhere close to 70%.

In 2017, Bloomage’s Cayman-based subsidiary spent EUR 14.275 million to acquire Revitacare, a French skin-care products manufacturer company fully. It later transferred 100% equity to Bloomage at a consideration of EUR 17.84 million. Since this deal, Bloomage has officially entered the European beauty care consumer market based on its French research-oriented subsidiary.

A global distribution network reaches out to over 2,000 clients, with some in an over-15-year business relationship. For the fast-growing skin-care products, it utilizes a mixed strategy: online e-commerce selling and offline distribution selling.

Even though the skin-care products are not the sexiest in terms of profitability, they do indeed form the segment that has the most substantial potential and is growing fastest. The year of 2019 saw a 118.53% growth in this business standalone compared to 2018. Most of the revenue growth can be attributed to Biohyalux ( 'Run Bai Yan,' 润百颜) – one of its portfolio product brands. The hot product ‘Forbidden City’ lipsticks, co-launched with Forbidden City (a well-known Chinese Qing-dynasty relic museum), attracted a lot of attention and success – these retainable users could be drawn to its other products.

Immediately following the Chinese ancient-style lipstick's powerful strike at the market, this company seized the timing to implement more promotion strategies, which meant investing more in the selling expenses. It almost doubled its 2018 marketing and selling expenses in 2019.

However, before this, Bloomage accelerated the marketing deployment since an expenditure amount of CNY 107 million in 2016 until a total of CNY 521.37 million in 2019. Along with this, employees' compensation and marketing advertising fees are the costliest because the company has transformed its strategy to boost its medical end products and skin-care products. 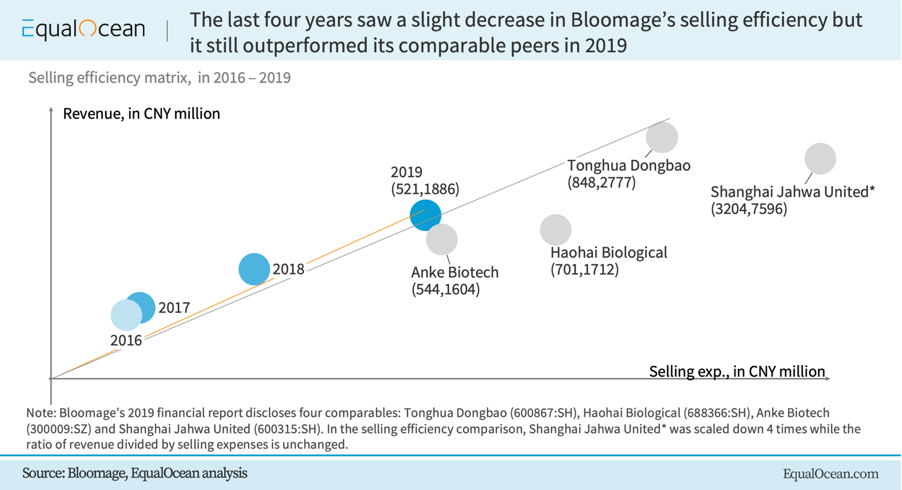 The global HA giant aims to utilize this bankroll to invest in an R&D platform update program and two other production expansion projects for HA raw materials and end products. Following the update of the marketing and selling strategy, R&D capability and production capability are the other two pillars that should follow. 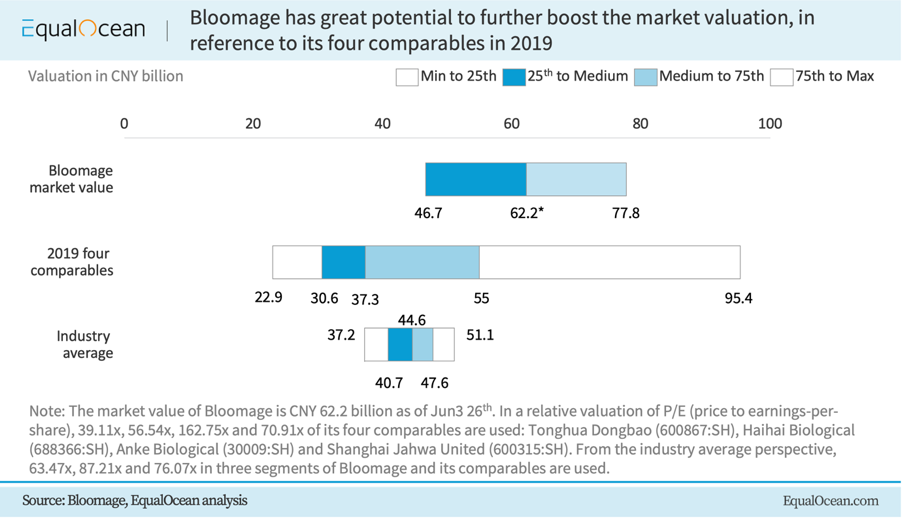 There is more potential in selling and R&D. Compared to its peers, Bloomage is relatively low in marketing expenses and R&D expenses. The selling part just started the omnichannel marketing strategy, so more costs will occur soon. But it is also expected to see an increase in revenue-selling efficiency, due to the previous sensational marketing foundation and establishment of a sophisticated global distribution channel.

As for the R&D expenditure, the IPO capital injection was deployed last year and may take one to two years to cause more related fees and monetize the investment into revenue.

It is the first Chinese HA maker to have made a breakthrough in the fermentation technologies and is taking over 30% of the HA global market. So far, it has shown resilience to the effects of COVID-19 in its stock price and is expected to see a boom in response to growing China's medical device industry.

However, this is just a start after the return to the A-share market. More concern comes  from the lagging R&D compared to the industry average, selling expense efficiency and the turbulent economic environment.