Analysis of the SaaS Insustry in China

During these uncertain times, the single most reliable thing for a stronger and more opportunistic future is digitization. This series of articles will include interviews with leading and fast-growing SaaS players and executives in China. We hope that this series will provide valuable information and inspiration to the market and its practitioners.

The SaaS industry has recently experienced a decline in both primary and secondary markets. At the end of 2021, SaaS companies in US equities were at their valuation highs, with most of them able to reach PS ratios of around ten or even twenty times. However, their valuations have now fallen by half or more, leading to a lot of negative sentiment in the market. 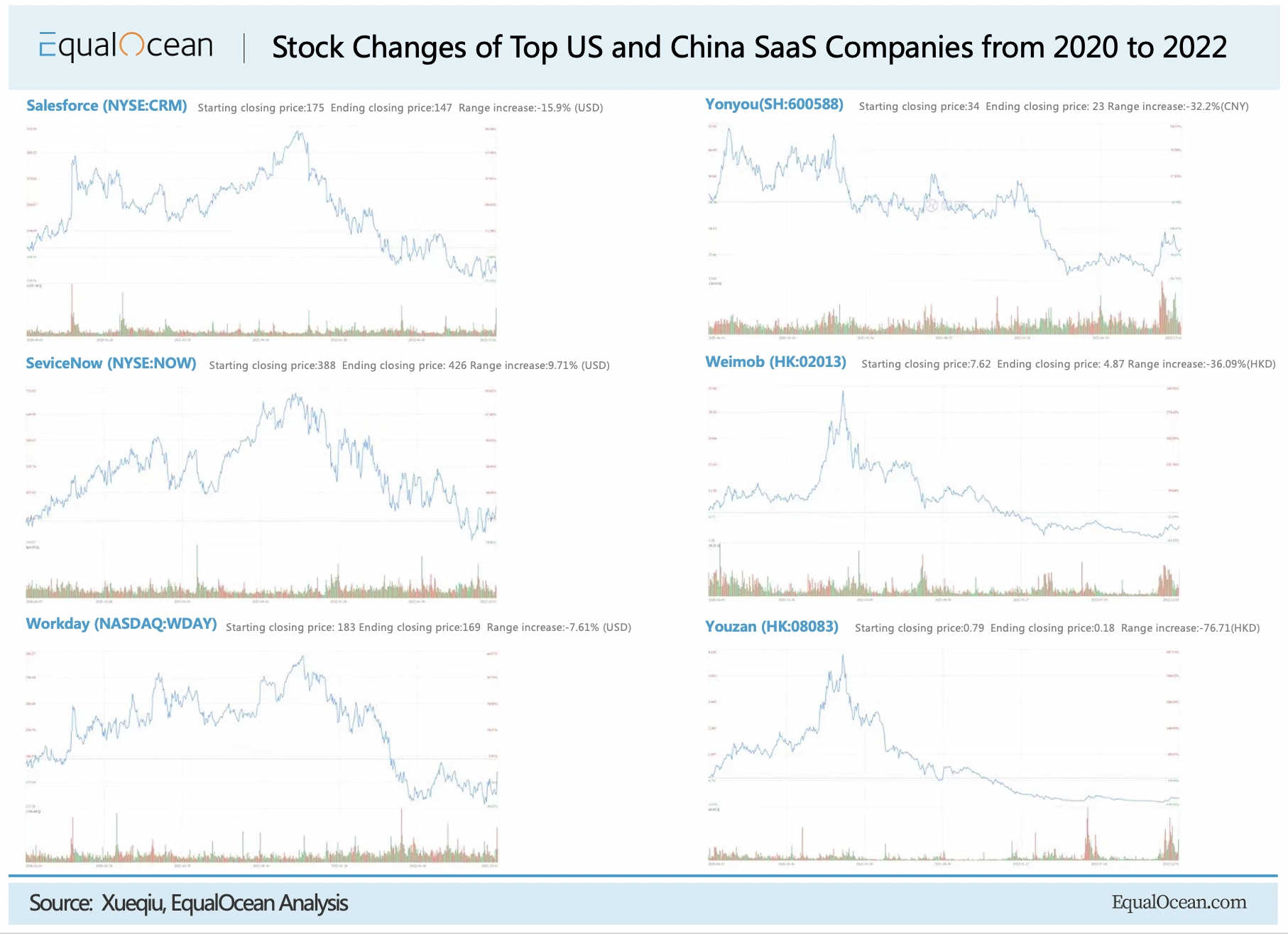 What are the reasons behind it? Should we still be bullish on SaaS? Is it a cycle? Will the industry's cold spell filter out the truly excellent companies? These are the questions we want to answer in this series of articles.

We hope to take this opportunity to increase the visibility of Chinese SaaS companies in the global market, and to bring together all sectors of the industry to pool their wisdom and help each other.

SaaS (Software-as-a-Service) is a software delivery model that emerged in the 1990s. SaaS defines a new delivery method, in which SaaS platform providers deploy application software on their own servers in a unified manner. Customers order services according to their demand, pay fees based on the amount and duration, and get the services provided by SaaS vendors over the Internet.

SaaS products are often divided into Horizontal SaaS and Vertical SaaS. Each broad category is subdivided into many smaller categories, such as marketing, data analytics, HRM, e-commerce, and so on. 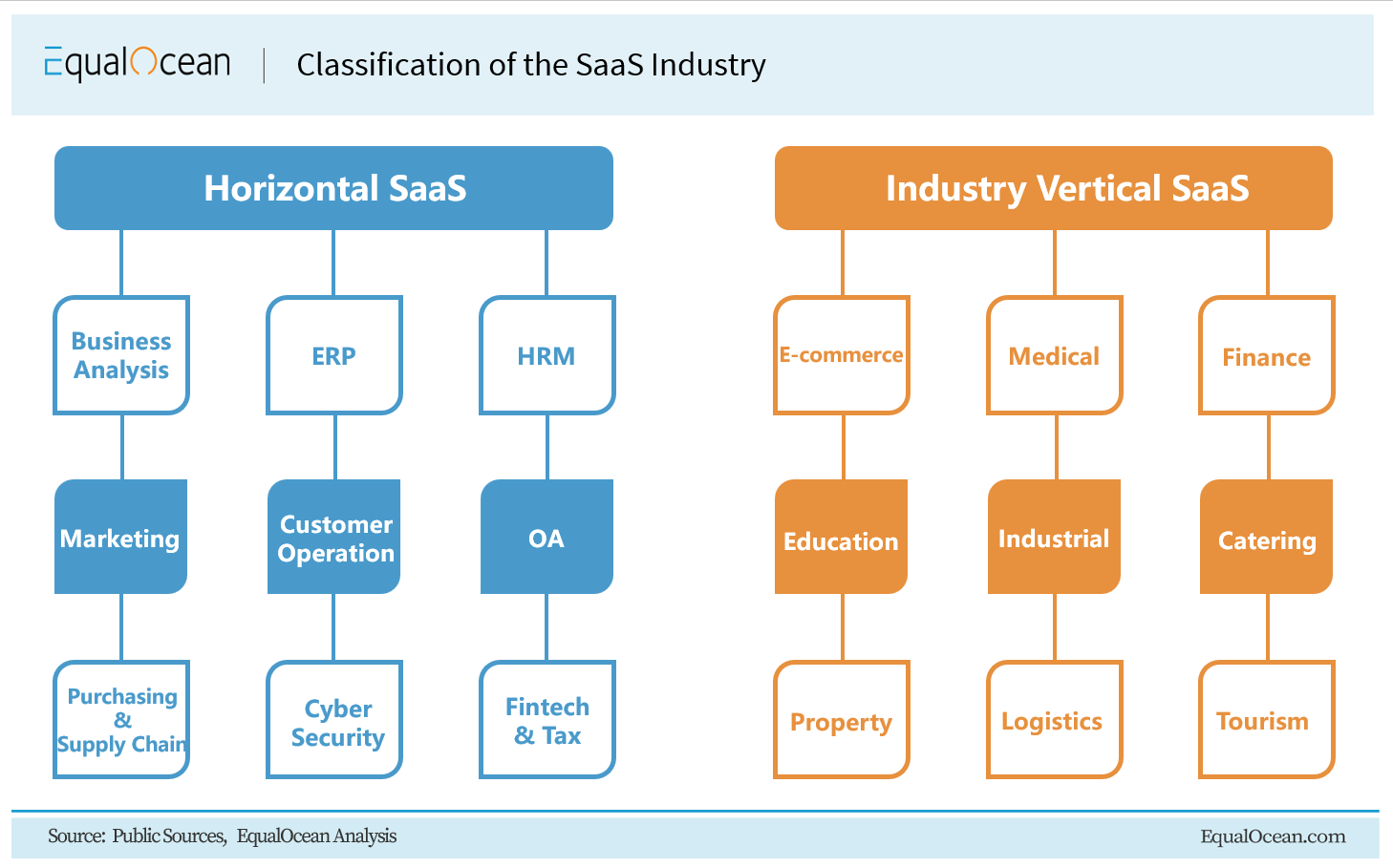 After more than two decades of development, SaaS has become one of the most focused industry directions in the global technology sector. The global SaaS industry has formed a hundred-billion-dollar market segment；its advantages, such as subscription-based, low-cost and rapid iteration, contain a huge business value.

In China, the SaaS industry is still in the process of rapid evolution and development. The continuous innovation of products and business models, the rapid change and adjustment of the industry competition landscape and product application scenarios are all breeding new market opportunities.

Why do Funders Favor SaaS?

SaaS is often considered to be a profitable business model.

Instead of paying for ownership of the software, companies now pay for its functionality and adopt a renewal payment method. For SaaS vendors, they are essentially charging businesses a "usage tax" on their software.

SaaS companies in all categories add up to an industry-wide "software tax." From marketing and IT to customer service, from healthcare and construction to finance and retail, all companies, industries, and businesses, are charged for the use of the software(SaaS). Companies are replacing some of their labor and assets with this software.

For membership or subscription business model, users may be lost because Walmart's price is cheaper than Costco, or Zara's clothes are more fashionable than UNIQLO. But for the (corporate) customers of SaaS companies, all their own information and data, such as employee, partner and customer data, are stored on the SaaS platform. They have already adapted to the functional modules of the SaaS product and thus have a strong dependency. Therefore, the renewal rate of SaaS products is usually high, which is one of the reasons why the SaaS model is favored.

Another advantage of SaaS is the predictability of revenue, which is the prepaid model. In our interview, She Wei, founder and CFO of Bailian AI (Chinese:百炼智能), mentioned, "I always believe that SaaS is a good business model. Its prepaid approach can greatly reduce the pressure on companies in terms of cash flow."

The lower cost is also an important reason on why the SaaS model can be profitable. The price of a system sold to just one customer is definitely not the same as a system sold to 100 customers. For SaaS vendors, the greater cost investment is in research and development and server costs. If the system used by each enterprise is delivered through flexible configuration based on the standardized products of SaaS vendors, which means "once invested, infinite utilization." As the number of users increases, the initial research and development cost will be gradually reduced, and eventually form a scaled effect. Therefore, standardization is one of the keys to SaaS companies' profitability. 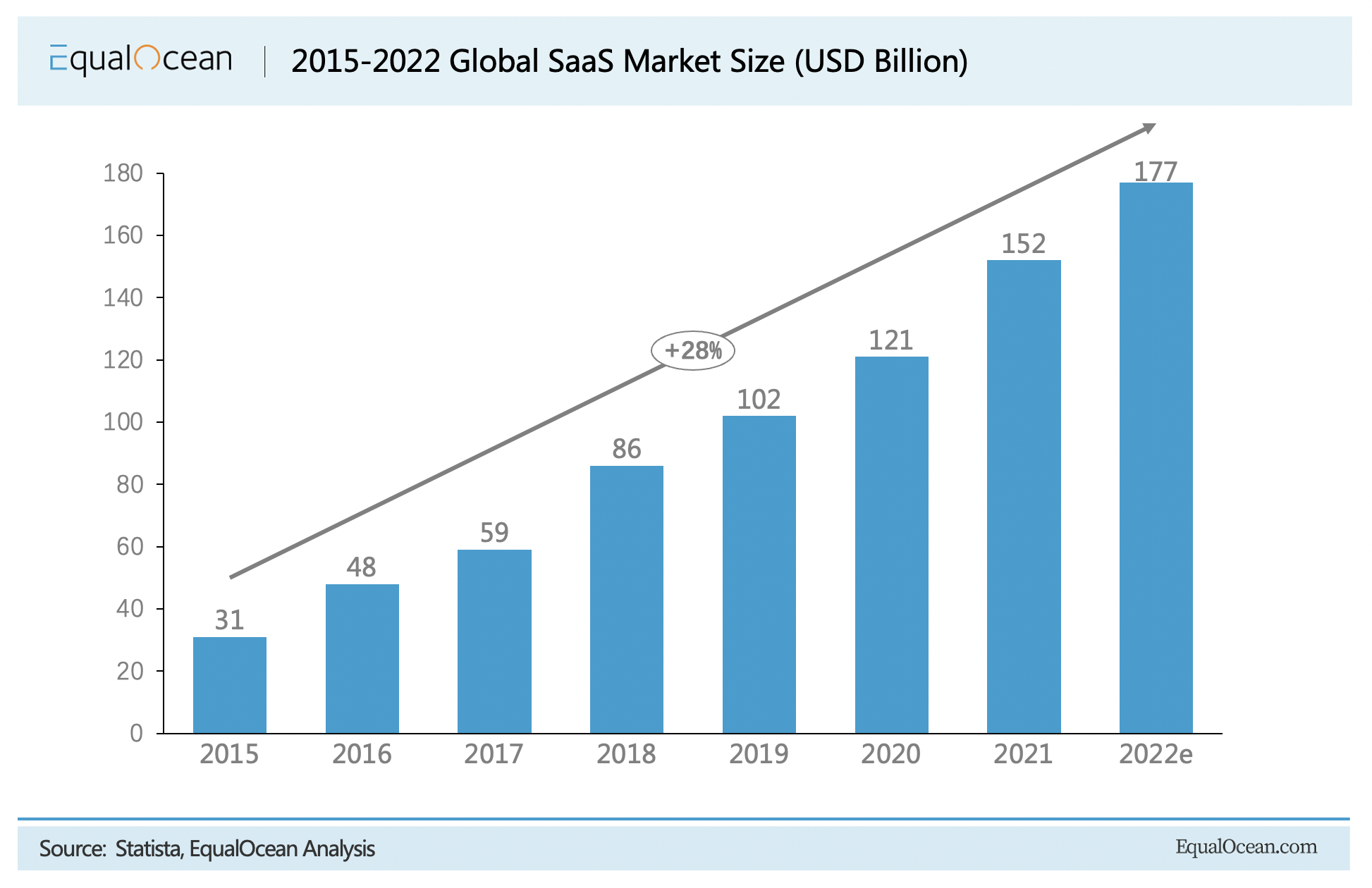 Compared to the worldwide SaaS market, China had early-stage experimental development from 2004 to 2005 and later around 2010.

From 2011 to 2016, the Chinese SaaS market grew at around 38% per annum before leveling out in 2016. After 2016, with rising “cloud” awareness and enterprise acceptance of SaaS, China’s SaaS sector kicked off a new wave of expansion, with the local SaaS market entering the fast lane.

From 2016, the sector experienced a compound annual growth rate of 41% until 2022, when the Chinese SaaS market size grew to USD 4.0 billion, highlighting expansion prospects for domestic companies. However, according to the data, there is still a big gap between the size of the Chinese and global SaaS markets. 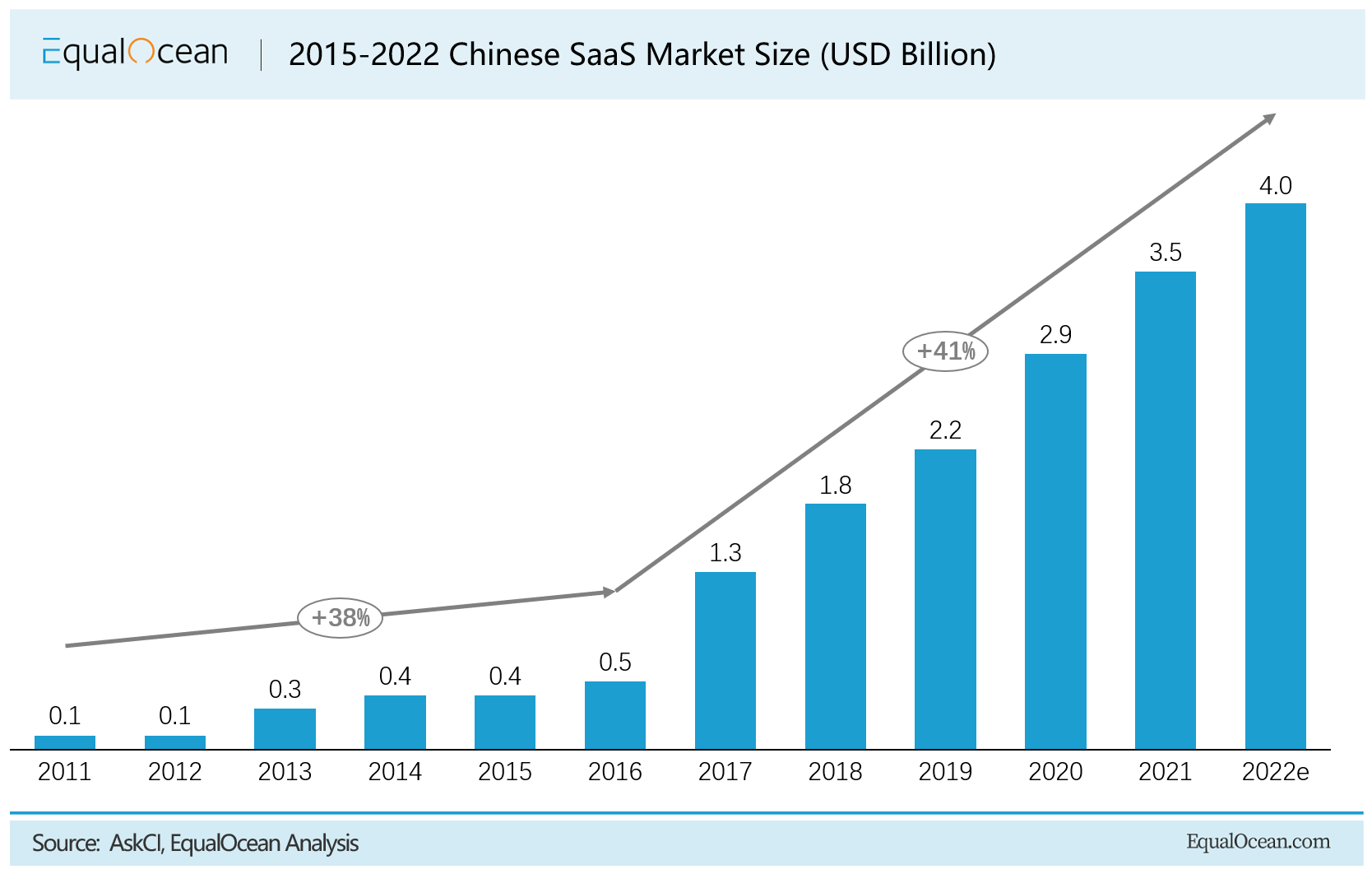 The domestic SaaS market in China is still fragmented, with each section of horizontal SaaS and each subsector of vertical industry SaaS having its own head SaaS companies.This shows an overall phase of tail vendors tapping into market demand, waist vendors exploring growth space, and head vendors trying to break through the ceiling of the track. As of now, there are no leading companies with a market capitalization of over USD 100 billion like the US market.

Comparison of SaaS between the US and China 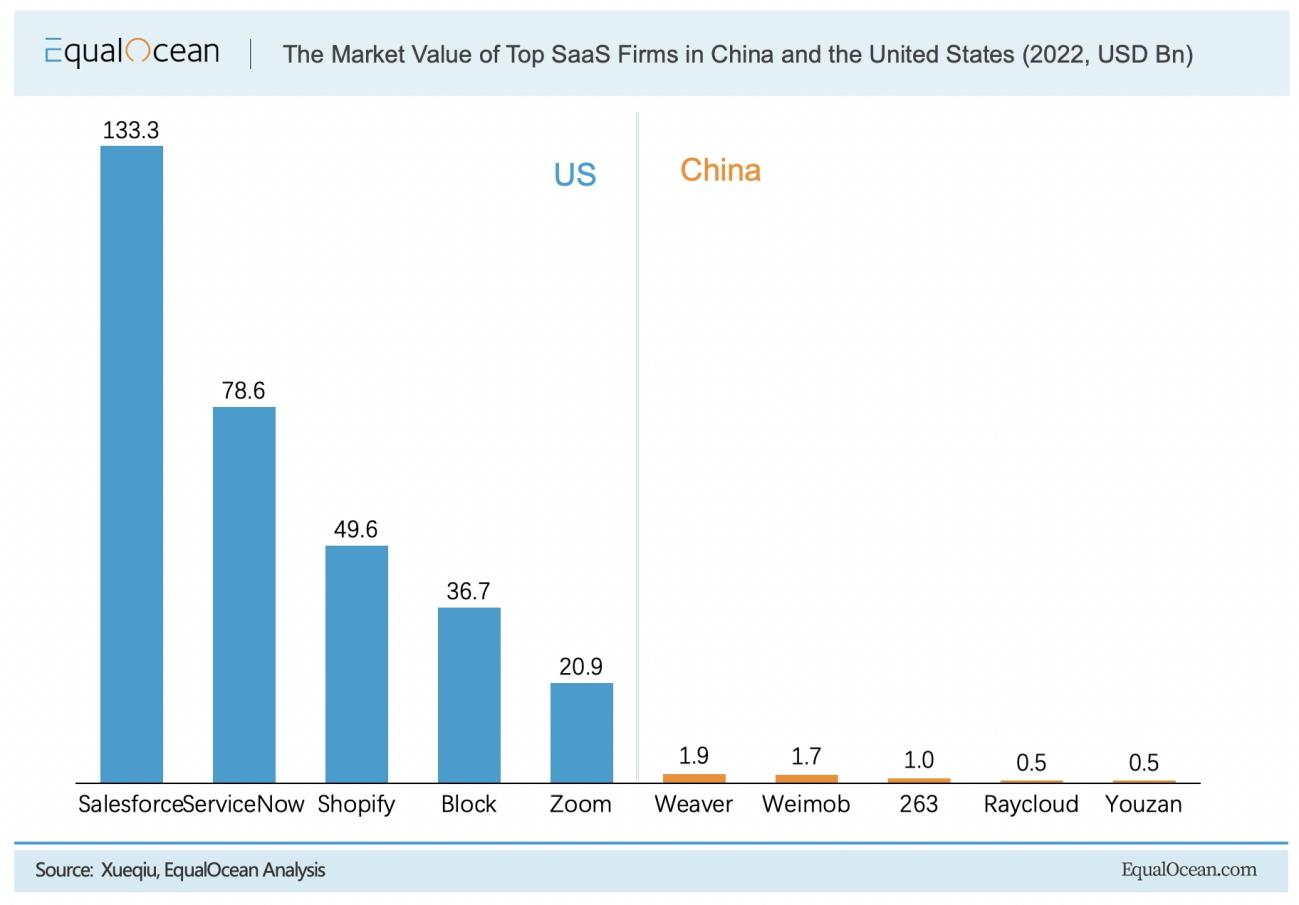 In the interview with EqualOcean, She Wei, founder and CFO of Bailian AI, pointed out that the difference between the Chinese and US SaaS industry is the supply and demand sides.

On the demand side：

Firstly, the value of SaaS is to provide enterprises with a tool that can improve efficiency. The essence of SaaS is to replace the workforce. There is a big difference between the US and China regarding staffing costs. Labor costs in the US are much more expensive than in China, so that enterprises will have a higher demand for SaaS tools.

Secondly, China is still in the early stages of SaaS business development. This is shown through the many imperfect business systems in companies, thus the demand for online management tools isn't as strong.

In addition, the large number of state-owned central enterprises is a major feature of the Chinese market. In the past, the special state-owned background and the importance attached to information security have led to their relatively low acceptance of SaaS tools, which is one of the factors affecting the industry's development in China. Today, state-owned enterprises are gradually increasing their acceptance of the SaaS model.This business model with Chinese characteristics dictates that Chinese SaaS products must be able to adapt to national conditions rather than copy the US operating model.

On the supply side：

China's SaaS industry has, after all, developed for a relatively short period of time, so various types of technology are not mature enough and it is still far from enough for products to meet customers' needs. Therefore, Chinese SaaS vendors must continue to work hard to accumulate industry know-how and produce more valuable products. This has become a consensus in the SaaS industry, and more and more Chinese SaaS vendors are targeting local needs and providing innovative products and services.

Ecological strategy:
KA customers can’t be served by just one company but must be served by joint ecological partners. In the future, SaaS vendors need to be sensitive to capture customer needs, while focusing on shifting the function of products from single to multi-module, and all types of SaaS vendors need to focus on the "ecological" value and data value of SaaS products.
In fact, the ecological strategy has become a consensus among Internet giants as well as foreign top SaaS companies. For example, DocuSign integrated Microsoft, Salesforce, Zoom, Oracle and other platforms to provide DocuSign+ partner solutions to customers.

Further market expansion to smaller cities and companies：
Digital needs are no longer unique to big cities and large companies; as market demand extends, SaaS is further sinking into SMEs, C-users and small cities. This means that SaaS vendors need to build lighter products that are more convenient, easier to use and more widely applied.

Vertical SaaS will become more popular:
Most companies have started their digitalization process in the past decade, and when they first started digitizing, they needed more general SaaS. Nowadays, general solutions can no longer meet the needs of individual business development. The market is rapidly changing, vertical SaaS products are emerging, "small and precise" vendors are emerging in more niche tracks.

WorkTrans (Chinese:喔趣科技) told us that, “With the advocacy and leadership of digital development, the development of SaaS industry in China is bound to progress move steadily forward. Large state-owned enterprises are transforming digitally, which will also drive SMEs to develop together.”