Industrial Metaverse: The Next Crowded Universe

This is the English version of the report released by EqualOcean Intelligence. 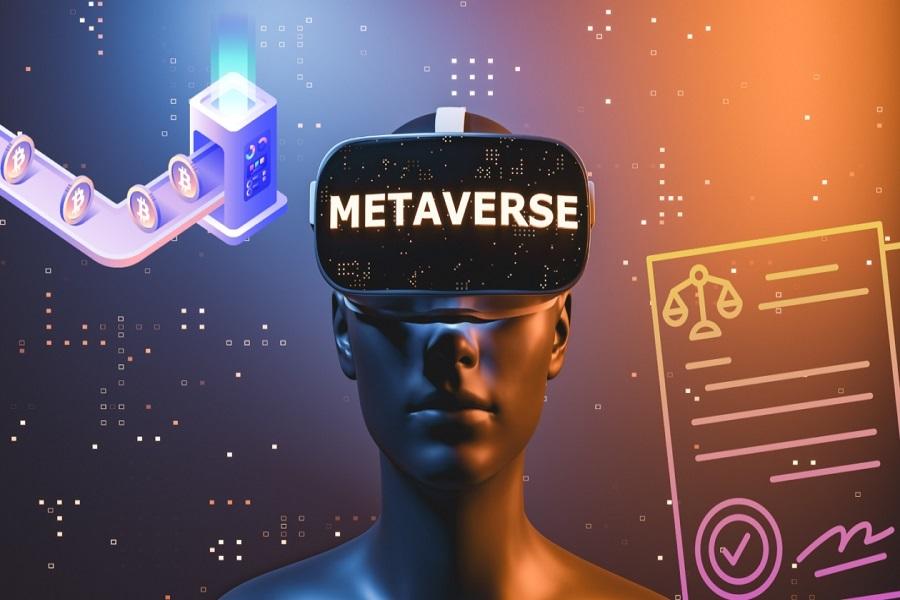 The term ‘Metaverse’ first appeared in the 1992 science fiction novel Snow Crash by Neal Stephenson. It refers to a single virtual world separate from the physical world. After three decades, the Metaverse is no longer a pie-in-the-sky sort of idea. On the contrary, this idea lingering around the brains of writers and game players has been translated into a reality.

The year 2021 is thought of as the first year of the Metaverse Era. ROBLOX, a sandbox game development platform and Steam-like game store, went public on the New York Stock Exchange, becoming the first stock in the meta-universe. Its stock price has increased by more than 10 times within a year. ROBLOX's explosive success came under the spotlight. As a result, more and more investors and players around the world, including Facebook and Foxconn have shifted their eyes to this industry. According to the data from Tianyancha, a provider of a business data and due diligence platform in China, there have been more than 12,000 trademark applications with ‘Metaverse’ in companies' names, and more than 2,700 trademark applications with the words "Meta" and "Metaverse" in their names by the end of 2021.

Metaverse can be considered as cyberspace on steroids which adds in more layers including augmented reality (AR), virtual reality (VR) and mixed reality (MR) to immerse you in virtual environments. It has the potential to revolutionize all industries. Though the Metaverse started from the consuming field, investors – especially manufacturers – are eager to apply this new thing to their operations. This is the so-called Industrial Metaverse. The reason is very simple. As with the rise and eventual application of every new technology, it is believed that advancements brought by the Metaverse will upgrade product quality, improve production efficiency and consumer satisfaction – and last but not least, cut off numerous but unnecessary links from manufacturing to the final consumption so as to save cost as much as possible.

An Overview of the Industrial Metaverse

The idea of human-machine collaboration has been embraced by an increasing number of manufacturers. It also opened the door to Industry 5.0 which puts more emphasis on people-oriented sustainability and flexibility. Human engineering and technology innovation has gone through the steam age, the electrical age, the information age and the digital age. The past decades of advancement and progress now work like a powerful but unimaginable catalyst to a new age. It is believed by many that the symbol of this new age will be the Industrial Metaverse.

The Industrial Metaverse is a new infrastructure, application and industrial ecology for the deep integration of industrial metaverse technology and an industrial economy. By creating a virtual world that maps and interacts with the real industrial economy, it builds up a holographic intelligent manufacturing and intelligent economic system which manages industrial products' whole life cycle and allows enterprises and consumers to join.

Development Background of the Industrial Metaverse

The Industrial Metaverse is considered an upgraded Industrial Internet. Its emergence will help the Industrial Internet to solve the current tricky problems: being an isolated ‘information island’ that makes it hard to realize effective data flow and integration between various underlying communication and data interaction protocols involved in a production line; difficult-to-generalize professional software in the industrial internet devices; the high cost of the Industrial Internet including talents, data and cloud computing; the risk of data leakage and cyber-attacks; irreproducible profit models that set high thresholds in different niches. It is expected that the Industrial Metaverse will bring new solutions to all of these problems. A sea of sensors and smart equipment will be invested to collect data. Aided by the application of blockchain and smart contracts, individuals will be able to share information and data. Besides, the intensive construction of hash rate will reduce costs further and make the service of the Industrial Metaverse available and affordable. With a combined hash rate from many machines (a measure of how many calculations can be performed per second) there will be strong resistance to attack. Furthermore, the maturity of blockchain technology will help the industry to set pricing criteria for data assets.

2. Talents in Key or New Fields and Policy Support 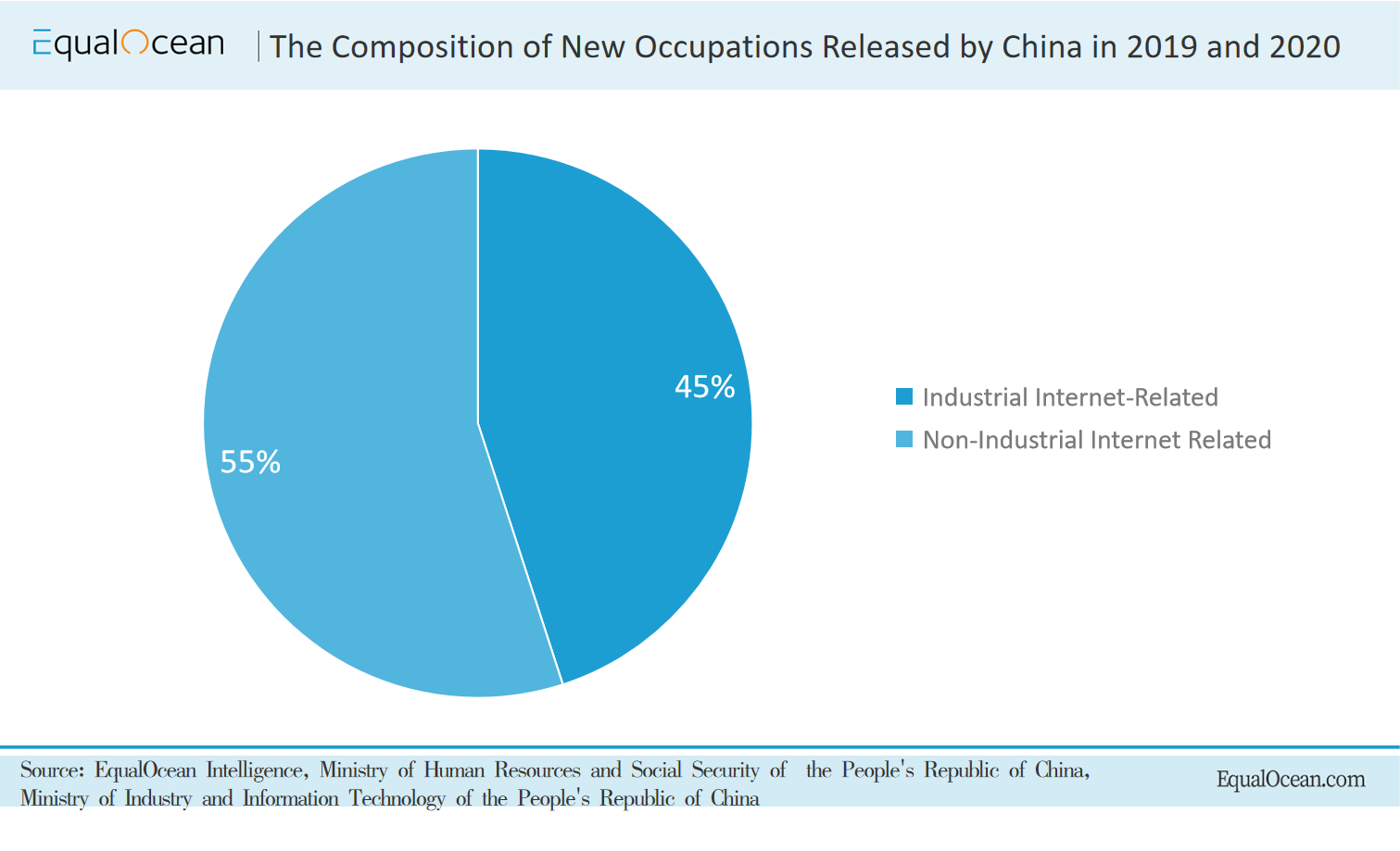 Scientific and technological strength has always been a vital part of a country's national strength. When applied in manufacturing, it will bring strong impetus to the country's development. Consequently, more and more countries have thrown money and issued policies in this aspect, so has China. The Chinese government issued Made in China 2025, the first ten-year action plan to build a manufacturing power, in 2015. According to this plan, an intelligent manufacturing system will be established, and key industries will initially realize digital transformation. Backed by this kind of national document, governments of all levels have also published various supportive policies and preferential treatment for industries and local enterprises involved. For example, the Guangdong government issued 10 policies with attractive subsidies to support the development of the Metaverse in the Guangdong-Hong Kong-Macao Greater Bay Area, especially the Industrial Metaverse. 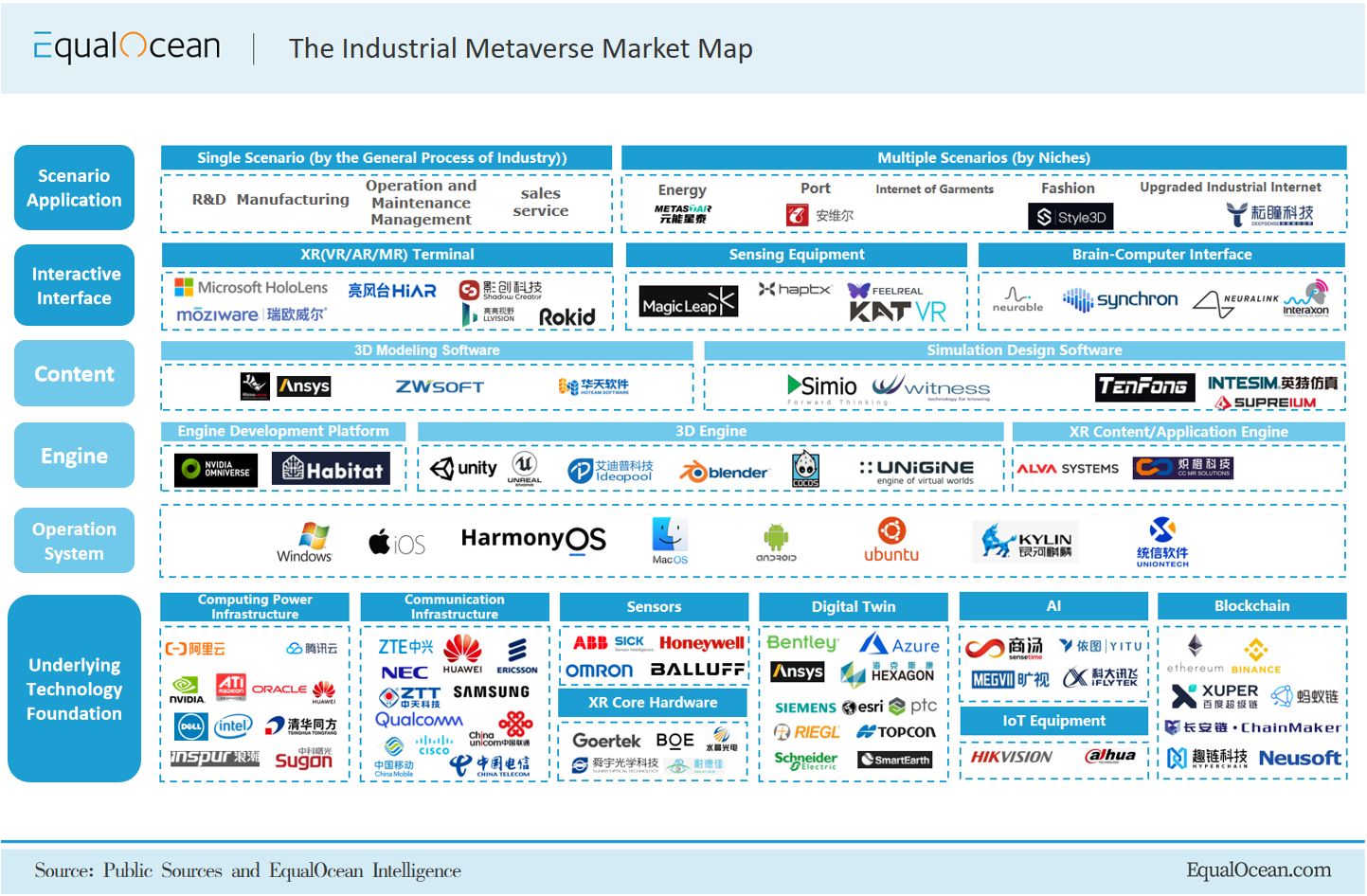 Technologies Involved in the Industrial Metaverse 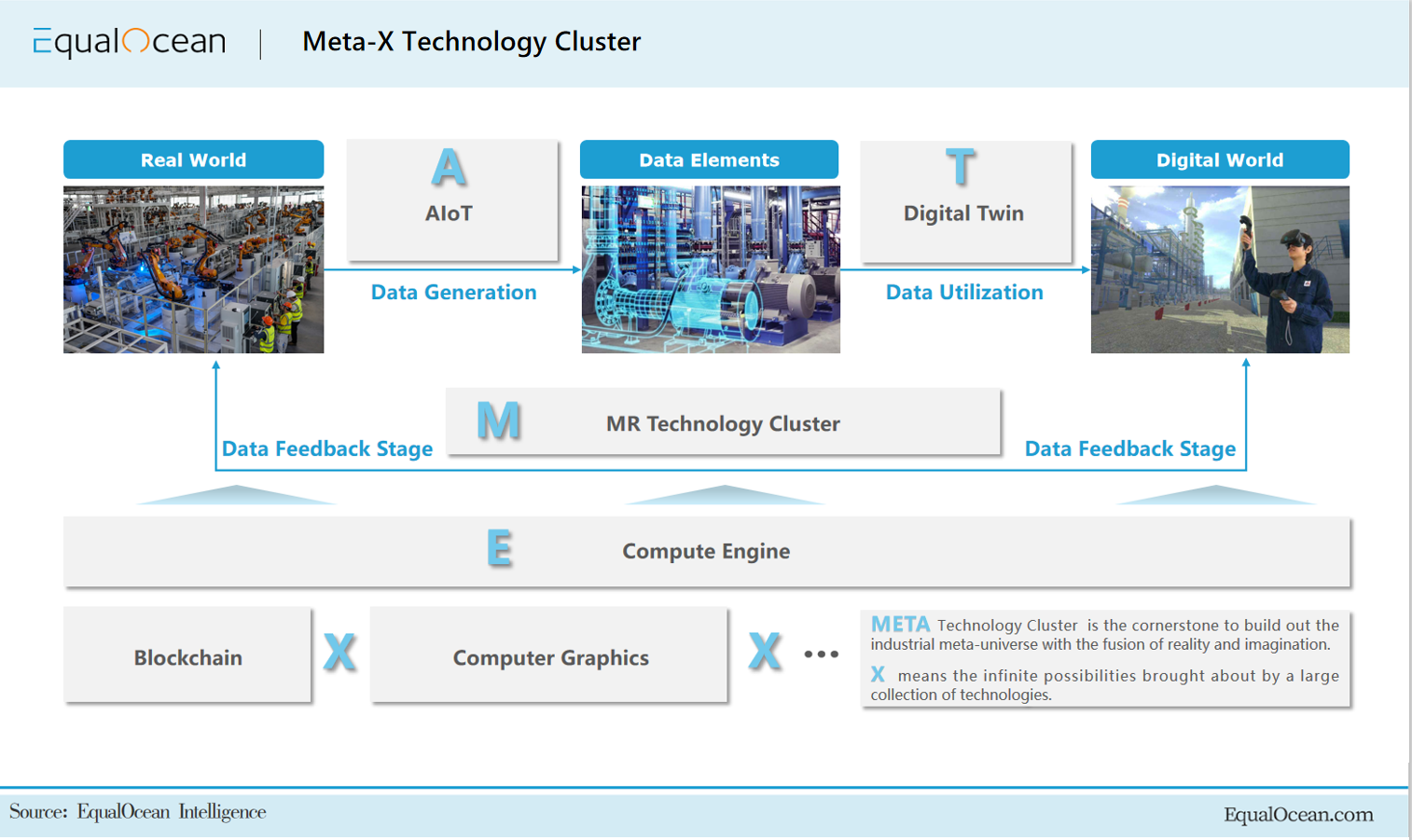 In the long term, VR is not suitable for the Industrial Metaverse as it emphasizes the experience in a virtual world. AR, on the contrary, bases itself on the physical world equipment and production line. MR (Mixed Reality) can help users go further as it is better at low-latency and complicated scenarios including remote collaboration, real-time equipment diagnosis, and industrial model design. EqualOcean Intelligent thought three aspects should be optimized in the industrial MR application – Field of View, visual display and human-computer interaction logic – to ensure the product stability, safety, adaptability and flexibility of the industrial scenarios.

The hash rate is the basic engine for the Industrial Metaverse. It can meet the demand of countless devices access with near-zero latency. Overall, however, China's manufacturing hash rate accounts for little and has low digital maturity. Enterprises will still depend on inclusive public compute engines in the short term. It is a definite trend that computes engine will establish a system that combines Infrastructure as a Service (IaaS), edge devices and collecting devices, enabling low-latency and low-transmission-cost industrial operation.

The digital Twin is an important carrier of the underlying assets of the future Industrial Metaverse. It is an information model that exists in a computer virtual space that is fully equivalent to a physical entity. Now it is mainly used in the full lifecycle construction of industrial physical objects, which is conducive to reducing the trial-and-error costs of innovation and accelerating product development. It is expected to build a digital twin for the whole industrial chain and even for the industrial economy in the future.

AIoT integrates AI (Artificial Intelligence) and IoT (Internet of Things) technologies, which can turn every element of the real-world industrial industry including human, machine, material, method, and environment into data resources, underpinning the construction of a digital twin. But its current application is characterized by fragmentation and centralization. Inclusiveness and normalization will be its trend in the future.

Computer Graphics (CG) is the use of computers to study the representation, generation, processing and display of graphics, mainly including the modeling of 3D geometric models, rendering, animation and interaction techniques. 3D models created based on CG technology are an important part of the Industrial Metaverse.

Underlying technologies directly affect the factors of production in the industrial meta-universe. Blockchain will directly reshape production relationships and bring about a decentralized collaboration paradigm. In other words, it is conducive to building "trustless trust", effectively reducing the cost of trust friction among various subjects in the whole industrial chain and promoting data assets to be traded in a decentralized manner.

According to research, the current stage of the Industrial Metaverse can at least optimize the human-computer interaction method and experience, combine IaaS, edge devices and collecting devices, build digital twin and bridge heterogeneous data sources. Besides, its application value in industrial scenarios is reflected in tangible value (such as a financial indicator of ROI) and intangible value.

The business scenario is based on actual service scenarios including 4 parts. First, R&D. The Industrial Metaverse is conducive to breaking time and space constraints, promoting remote collaboration among R&D and design experts, and conducting simulation tests in virtual space, thus reducing trial-and-error costs and risks. Second, manufacturing. The Industrial Metaverse can realize the digital connection and efficient collaboration of all production factors to create a new type of production system with agile perception, real-time analysis, autonomous decision-making and precise execution capabilities. Third, operation and maintenance management. The Industrial Metaverse can manage the full life cycle of equipment, promote the visualization of industrial knowledge and lower the technology threshold and improve human-machine interaction to ensure that all personnel can access equipment and in-depth information. Fourth, sales service. The Industrial Metaverse can revolutionize traditional business models of B2B and B2C to make C2M (customer-to-manufactory) a reality, meeting customers' individual needs in time.

It should be noticed that different industries have also met new changes when facing the Industrial Metaverse. For example, the Industrial Metaverse has helped steel and chemical industries build new carbon-based materials plants to realize green transformation and carbon neutral. From the design to sales service, it can the apparel industry solve pain points in the whole value chain –lowering cost, improving production efficiency and satisfying customers' demands simultaneously.

The Future of the Industrial Metaverse

According to the analysis report from EqualOcean Intelligence and views from experts, it is expected that the Industrial Metaverse will make breakthroughs in underlying technology by 2027, realize leap-frogging transformation before 2032 and take shape after that. Consequently, the corresponding core challenges will focus on ensuring enough hash rate to maintain data operation, and efficient supervision and build new application scenarios once initial problems of data assetization, universal coverage and new orders are solved.

The pinpoints of the current stage in different scenarios will be dealt with in the near future through 3D visualization of factories, cross-space multiplayer collaboration, big data real-time analysis and intelligent manufacturing. Under such circumstances, MR hardware/software enterprises and industrial software enterprises will shine brilliantly.

The Industrial Metaverse needs an astronomical hash rate to support it. This also means compute engines will follow a diversified and synergistic development trend. It is believed that this smart advancement will also promote green powering as a large-scale computing power will be the core infrastructure of the new system.

This article contains only excerpts from the report. For more details, please click to download the full report here.

CONTACT US
Scan QR code to contact us for professional consulting services
Next article
The "Brain" of Self-Driving Vehicles: Autonomous Driving Domain Controller