Why Do We Think JIDU is a "Bad Business"

Based on the historical performance of Baidu, and the competitive EV market in China, we do not think JIDU will take advantage of the EV market. 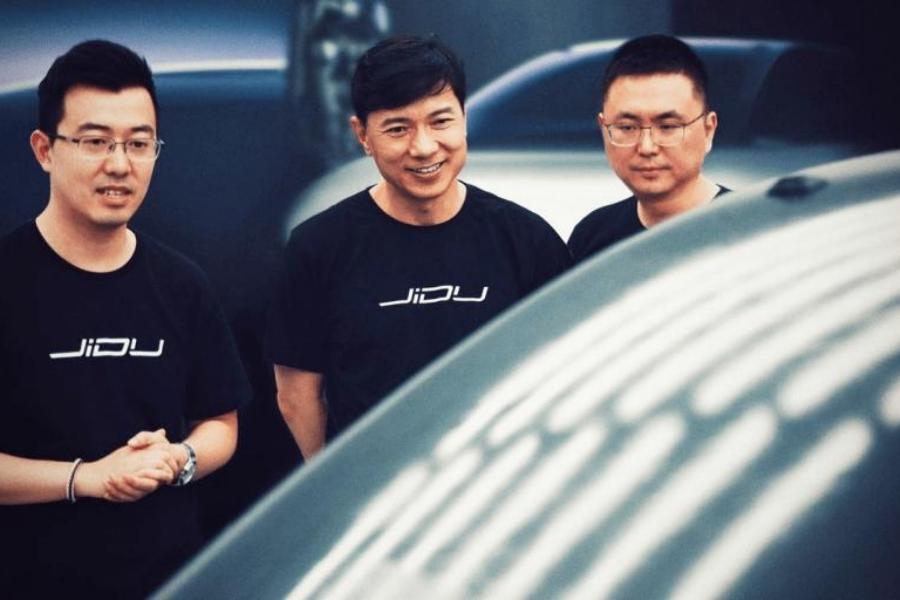 Backgrounds of the JIDU Auto

JIDU Auto (Chinese: 集度汽车), a NEV venture co-founded by Baidu and a Chinese auto manufacturer Geely, rolled out its first concept car in early June 2022. The company announced that its first mass-produced model of vehicle would be 90% similar to the concept car in 2023, according to the announcement from JIDU.

Meanwhile, according to a public report, more than 16 top talents related to the autonomous driving sector left Baidu from the year 2015 to 2018.

Xia Yiping, the CEO of JIDU Auto, identified JIDU vehicles as "Autorobot". Similarly, the company makes the vehicle intelligentialized as a sale point and announced that its cars will be mass-produced with SAE L4 autonomous driving technology. SAE L4 driving automation is a system that can perform all driving tasks and a driver can take control at any time if he or she would like. 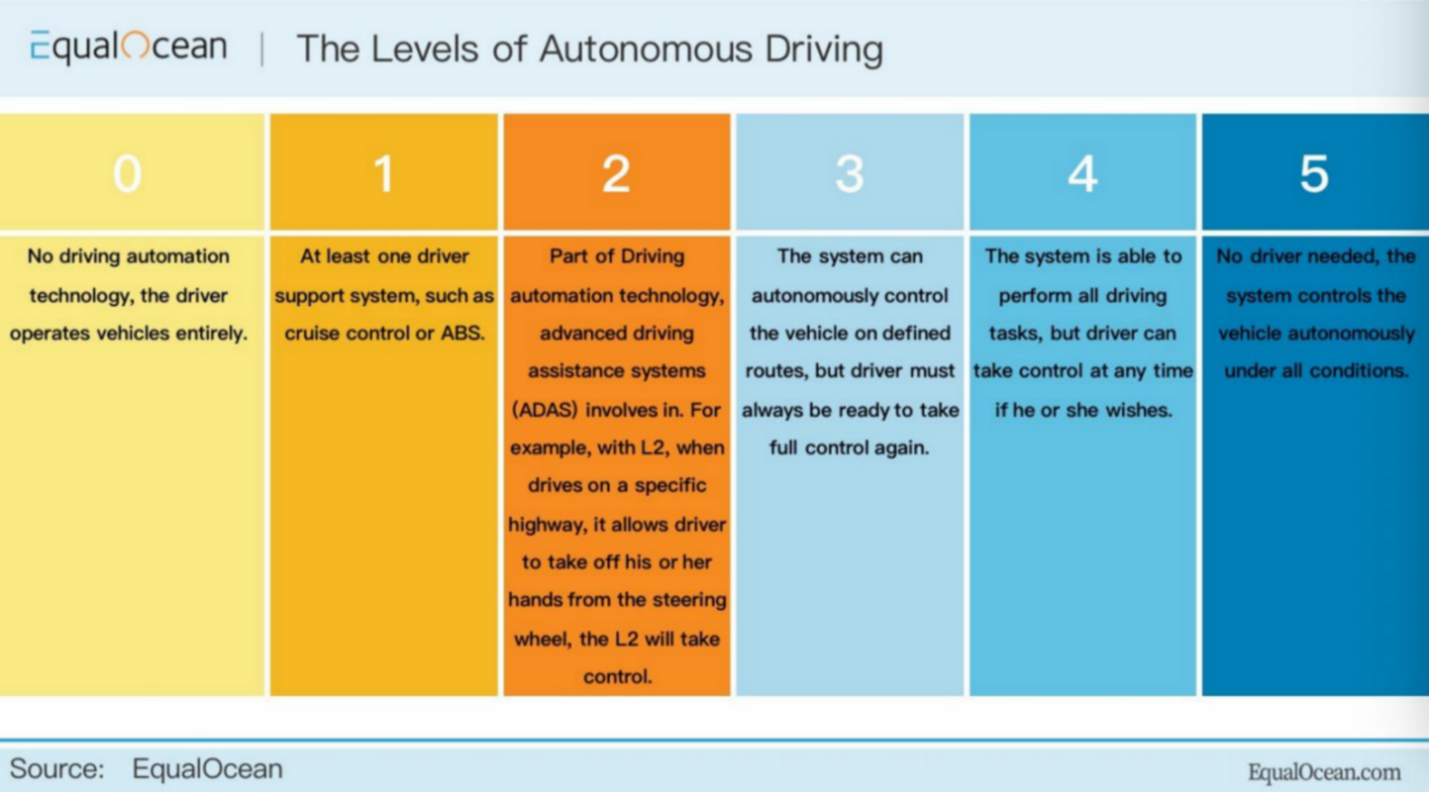 Moreover, L4 technology needs various types of sensors and chips, which means the cost increase. Around 600-700 chips are installed in a petrol vehicle and an electric vehicle will be equipped with about 1500 chips.

China’s Dynamic Zero-Covid policy, the productive capacity of the reduction, the increasing need for chips, and the political conflicts around the world that caused the chip shortage and the surging price of raw materials, all of which put significant pressure on automakers to maintain production amid already severe supply chain shortages.

To deal with the chip shortages, the company established a team to seek chips in the world. As Xia said "JIDU has a team to seek some particular chips globally. For example, the team updates the latest chip information every day, if our vehicle is short of a number of particular chips, we can make the team find it on time". Notably, as one of the most significant components, the company has not announced its power battery plan.

Baidu's Strategy for its Apollo Project Before JIDU

Before JIDU Auto was established in 2021, Baidu wanted to collaborate strategically with WM Motor (Chinese: 威马汽车). Since the year 2017, Li Yanhong, the CEO and founder of Baidu, has invested in WM Motor three times. He believed the WM Motor was the best choice for its Apollo project. Moreover, Baidu and WM Motor reached an agreement that WM Motor could not develop its own self-driving technology, and Apollo autonomous driving technology is the only system that WM Motor could be used.

WM Motor's sales and reputation have been declining since 2019, and it is falling behind its competitors. This may explain why Baidu co-founded JIDU Auto with Geely Group. 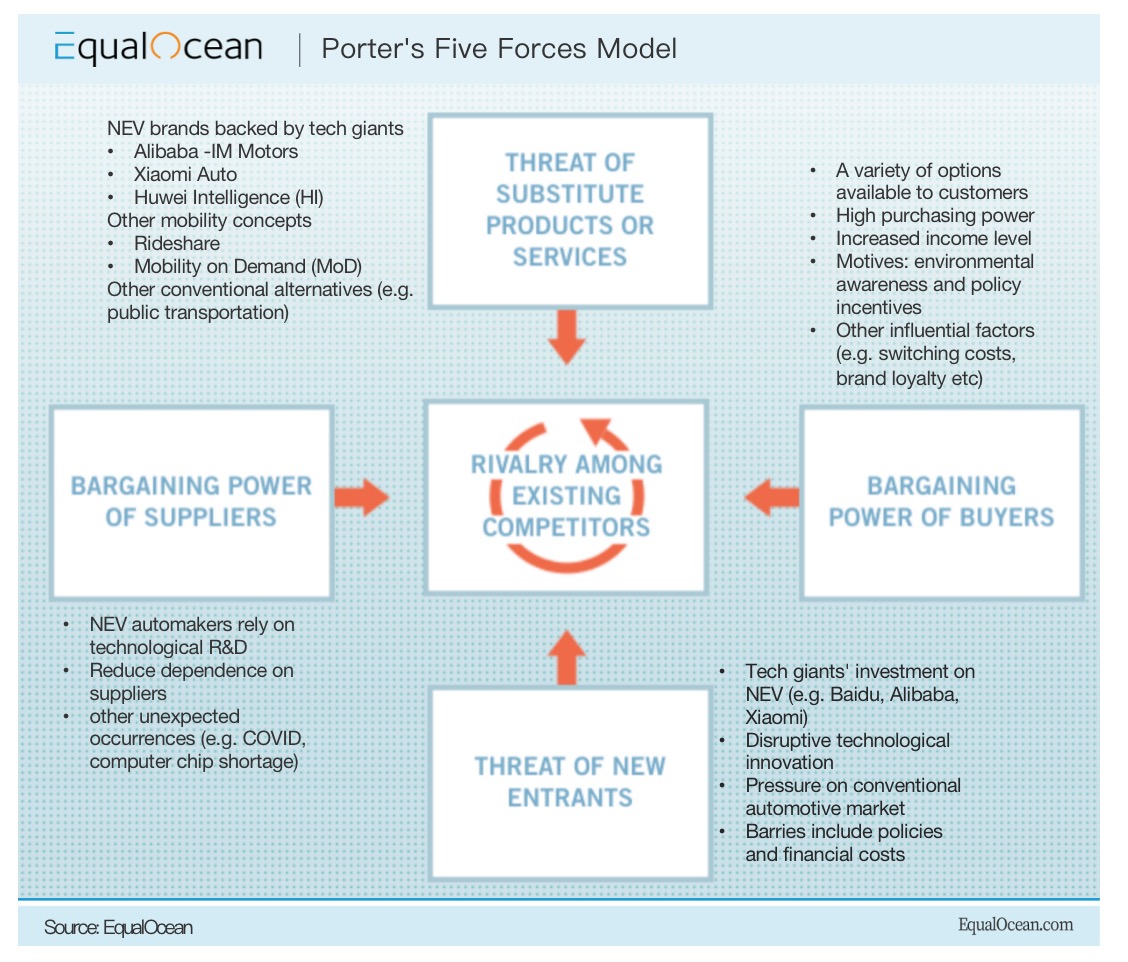 The potential of the automotive industry is continuously increasing and industry rivalry is relatively high in China. Before and after launching JIDU with leading automaker Geely, Alibaba, Xiaomi and DiDi successively announced their attempts of entering the car manufacturing market. Skyworth, a home appliance enterprise, also entered the market with a high profile. In addition, well-renowned and established car brands, such as Nio, Li Auto, and Xpeng, play an increasingly dominating role in the Chinese market. The intense competition among existing players in the automobile industry will drive down prices and decrease the overall profitability of this industry. The current rivalry has entered a new stage with the main focus on intelligence driven by disruptive technology and driving experience.

The threat of new entrants (low-medium):

Compared to traditional automakers, tech giants, such as Baidu, Alibaba, and Xiaomi, opt for more disruptive and advanced technology-based software and Artificial Intelligence (AI). These capabilities are superior to conventional automakers, which prepared them for the domain of intelligent electric vehicles. The entry of the New Electric Vehicle (NEV) makers brings technological innovation and exerts pressure on the traditional car market through lowering pricing strategy, reducing material costs, and propositioning new values to the customers. For example, JiDU Auto aims to popularize autonomous driving and human-machine interactive technologies.

Moreover, the threat of new entrants has been affected by the entry barriers, such as government policies, capital requirements, infrastructure, customer demand, economies of scale, etc. On January 26, 2022, JiDU auto raised USD 400 million to speed up its market entry in order to enhance its Research and Development (R&D), with particular respect to autonomous driving and smart manufacturing.

The bargaining power of customers is comparatively high in the Chinese automotive market due to a multitude of options available to customers. The purchasing power is still considered to be high in the Chinese market as the income level has increased considerably in China during recent decades. With increased environmental awareness and relevant policy incentives, there is an increasing trend that more customers will switch from conventional cars to a NEVs.

The bargaining power of suppliers is relatively low as NEV automakers primarily rely on their technological innovation and R&D capabilities. Prior to the setting-up of JiDU, Baidu's Apollo ecosystem has gained hundred of partnerships with various manufacturers and suppliers, such as Toyota, Ford, and Volkswagen. This is of great importance to reduce the dependence on suppliers. However, the bargaining power of suppliers is also affected by unexpected upsides, such as the effects of Covid-19 and chip shortage.

Threats of substitute products or services (medium to high) 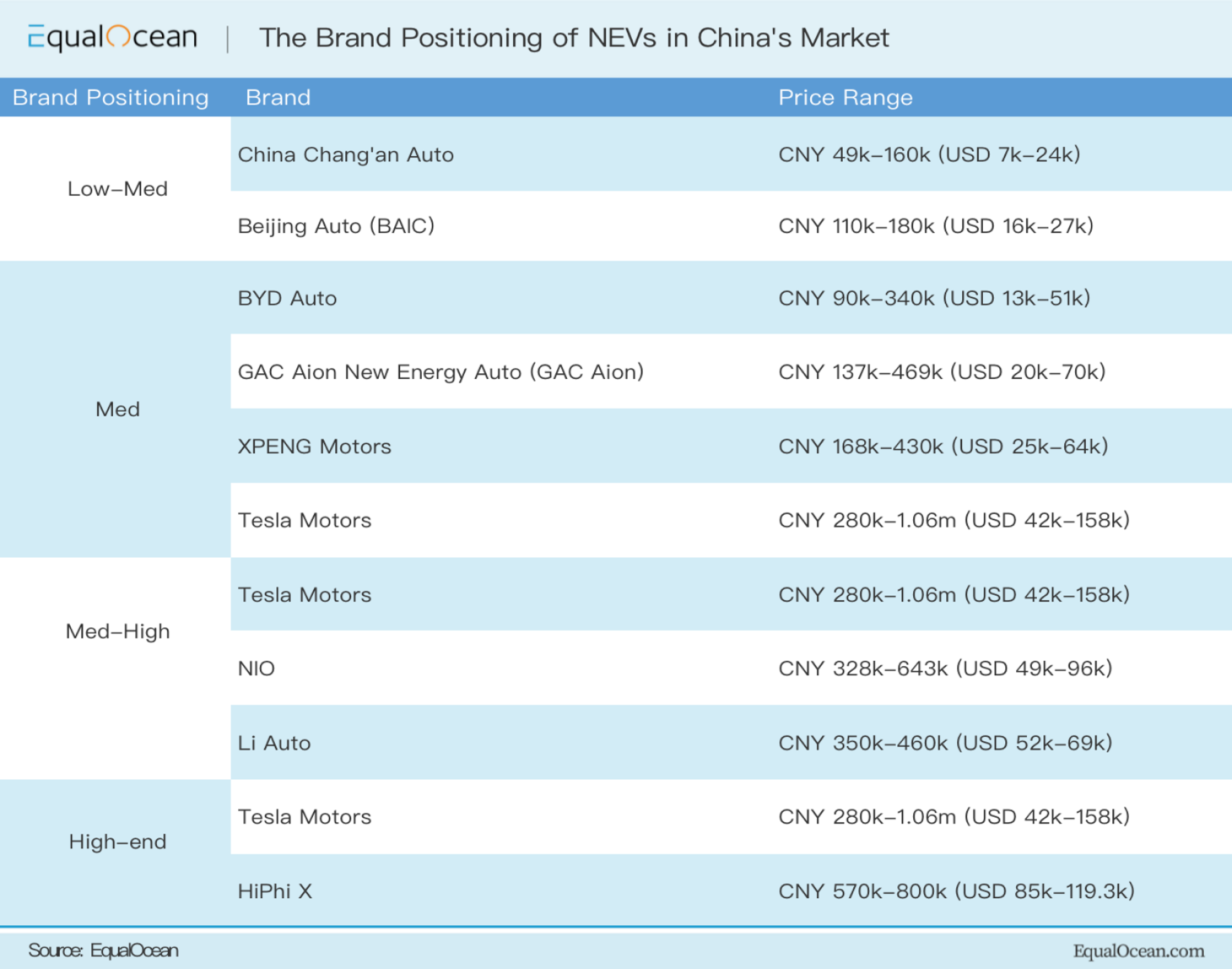 JIDU's brand positioning is vague. The company states that its first model of vehicle will mainly compete with Tesla's Model Y, and the pricing will start at CNY 200,000 (USD: 29,860). So, the above chart shows the prices of Tesla vehicles, ranging from CNY 280,000 to 1.06 million, which almost cover the middle to the high-end classes of the EV market.

The EV market is getting more crowded. From the low-med class, players include Changan and Beijing Auto, which are the local auto manufacturers. Moreover, in the med to med-high classes, JIDU will not only join the competition with the likes of NIO, Xpeng, and Li Auto, nicknamed China's NEV-making "New Forces", but also Tech giants including Xiaomi (Chinese: 小米) and Huawei (Chinese: 华为) have also announced their car-making plans.

Also, JIDU is in a "concept car" stage while other automakers in China's market are already commercialized within a few years. As a latecomer, it is hard for JIDU to catch up with its competitors, and the entrance level of the auto market is getting higher. 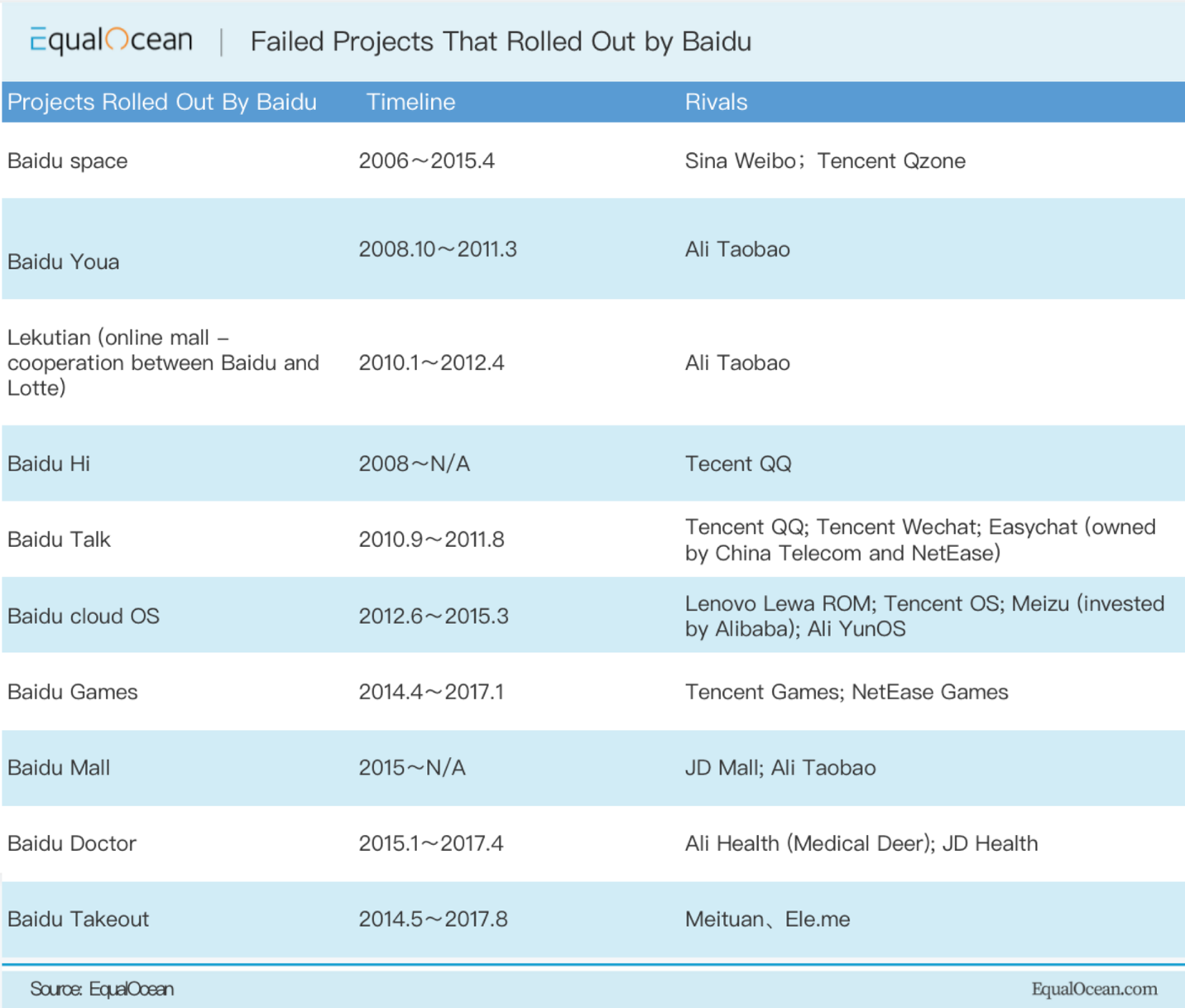 In recent years, Baidu has kept tracking business trends in the Chinese market but failed as the company is lack of creativity. As an internet company, creativity and innovation are the key factors to survive in China's market. The chart above shows failed projects introduced by Baidu. Baidu, Alibaba, and Tencent were nicknamed BAT. To date, the market caps of Baidu, Alibaba, and Tencent are USD 52.35 billion, USD 310.30 billion, and USD 435.62 billion, respectively. Baidu lags far behind Alibaba and Tencent.

Technically, if a new model of petrol vehicle rolls out from design to mass-produce, it usually takes 4-5 years before selling to clients as it will experience vehicle testing, quality control, and the capacity for improvement. The EV cars may take less than that. Also, EqualOcean believes JIDU mass produces vehicles that cannot be with real SAE L4 technology within 3 years. If the company can not produce JIDU vehicles as scheduled, with the slowing of commercialization and poor performance of the company's cash flow, the investors may be disappointed with the company.

CONTACT US
Scan QR code to contact us for professional consulting services
Next article
AstraZeneca in China: Opportunities and Challenges [2/2]