China’s cloud service market is in the spotlight. Each company in this market has its specialization of business. In this paragraph, we will discuss the current situation and future predictions of Alibaba Cloud, Huawei Cloud, Tencent Cloud, and JD.com’s Cloud. 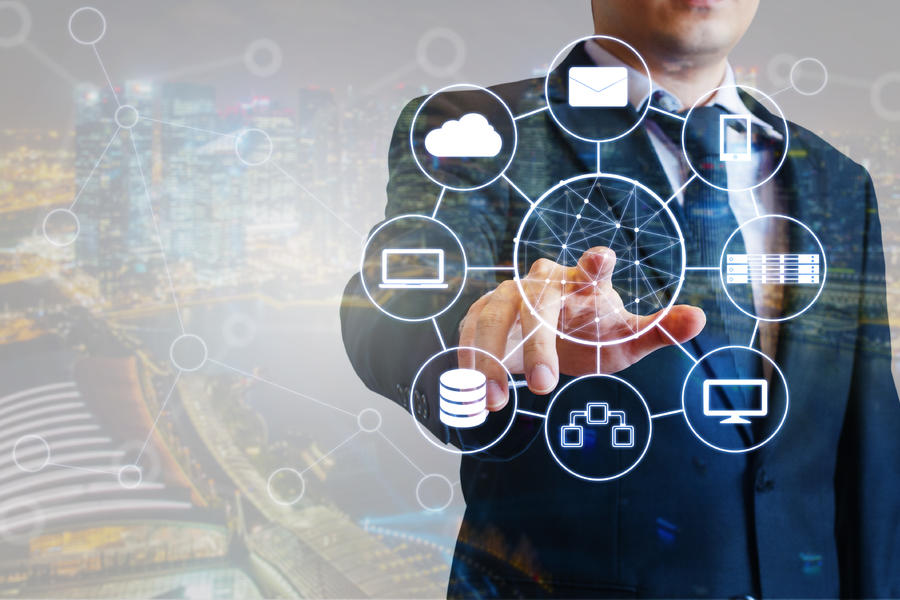 In the last article, we discussed China’s cloud service market and Alibaba Cloud’s current situation. In the following paragraphs, we will detail other companies in this track and predict their future growth.

Tencent cloud started in the industry that Tencent was specialized in, such as games and video verticals. With the first success of cloud in games, Tencent Cloud reached another success in its development in video verticals. These two starting points of Tencent Cloud provide the natural advantages for its further expansions in the cloud service market. The market share of Tencent cloud was 16% in 2021, according to Canalys. Tencent cloud also broke though the smart industries such as finance, retail, livelihood, tourism, and healthcare. Tencent cloud maximizes the use of its ecological resources in the two strong sectors to ensure the diversity and growth of its scenarios. People also choose Tencent cloud for its security and stability. The development of HiFlow under Qianfan also provides personalized convenience for the C-end to solve the problem of application connection and data automation. 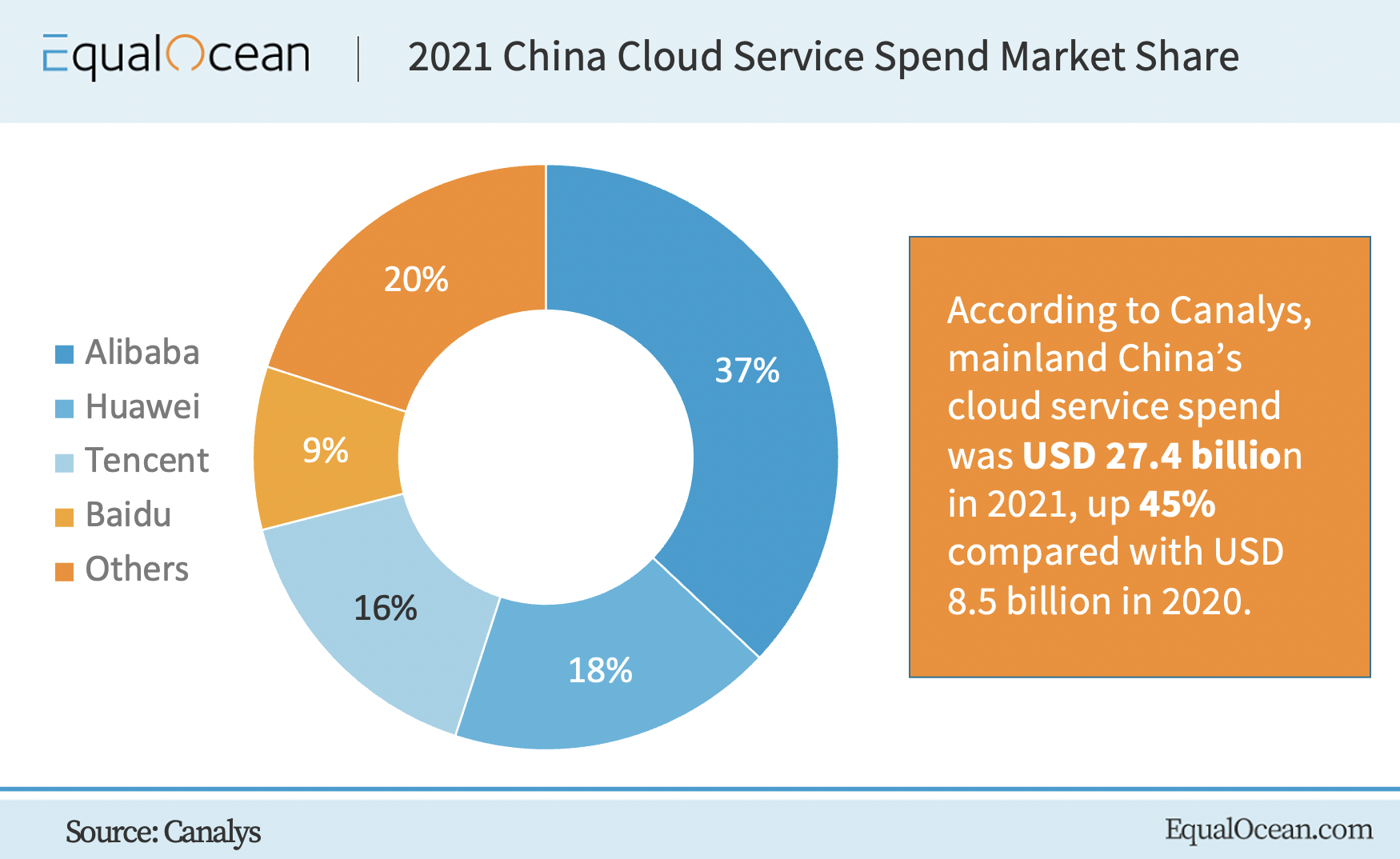 We believe that another advantage of Tencent Cloud is its numerous cooperation. Tencent Cloud provides its business partners with one-stop digital upgrade solutions. They are all based on Tencent Cloud’s own cloud service and its network with gaming, social networking, video verticals, and others. Till 2021, Tencent Cloud cooperated with more than 9 thousand partners, with hundreds of them gaining annual revenue over CNY 10 million. They launched more than 400 solutions in 30 different industries. The number has increased by more than 150% year-over-year. We analyze that Tencent Cloud has discovered the core of business through cooperating with partners, and might move forward with gaining more cooperation.

We think Tencent Cloud’s expansion in cloud infrastructure might also provide itself a better environment to work on the next-stage development and hire more people. It is reported that Tencent Cloud has built the largest cloud infrastructure in Asia, with more than one million servers and more than 2 million developers. 4 AI artificial intelligence laboratories, and 7 security laboratories indicate the size of this infrastructure. Covering more than 300 self-owned industry solution products in various segments also implies that this business move has the potential to succeed. However, in our idea, whether the cost of building such a large infrastructure is worthy or not, the result is hard to tell.

We also consider that Tencent Cloud’s investment and cost make it risky to gain profits. Tencent Cloud’s bid for Xiamen Cloud Project was controversial by the public. In recent days, a wholly-owned company by Tencent invested in a semiconductor company named Yunbao Smart and became the largest shareholder. And on May 11, 2022, another similar company related to Tencent also invested money into this semiconductor company. And this semiconductor company is mainly working on the development of DPU. Under the pressure of Nvidia to develop a similar product, Yunbao encountered a challenging competitor. And we found it difficult to imagine whether Tencent’s investment in this could succeed or not.

Looking into its financial data, Tencent Cloud does not have its own sector. It belongs to the category of “Financial Technology and Enterprise Services.” From its financial report of Q1 2022, this category gained revenue of CNY 42.8 billion, up 10% year-over-year. This was the largest revenue stream for Tencent for the first time. This was also the lowest growth rate since its publishment. Tencent concluded the reason for the decline to be the “repositioning of IaaS services”. Instead of simply focusing on the increase in revenue, Tencent Cloud chose to pursue healthy growth and reduce contracts that could lose money.

However, we believe that Tencent Cloud is not that simple. Because Tencent Cloud relies on games and entertainments. However, due to COVID-19 and the macro environment’s influences, these two sectors were no longer as profitable as Tencent expected. And we consider that only focusing on the development of these two could restrict the growth of Tencent Cloud. Tencent Cloud’s current business plan is to focus on PaaS solutions in the fields of video cloud and network security this year. We analyze that even though Tencent Cloud has a high percentage that it could successfully transit to profitable growth in the long term, the short-term damage to the revenue growth is unavoidable. Tencent Cloud also faced the problem of the retail market, which could cause an insufficient push later.

Could Huawei realize its strength in its cloud service?

As the second-largest cloud service in China, we conclude that Huawei Cloud has unique identification with its business- it takes its advantages in the government cloud field. Huawei Cloud was ranked first place in this field in the IDC’s “Integrated Innovation, Going Out of Inner Volume - 2020 Government Cloud Service Operation Market Research Report”. The market share was 32.2% in the government cloud market. With the help of the Matthew effect, Huawei Cloud both maintains its long-term lead in this field, and continues to maintain a rapid growth of about 20% compared with the last year. Huawei Cloud, the early bird of China’s government cloud market, has relatively rich experience in government construction. And Huawei Cloud has a fairly complete cloud ecosystem and sales capabilities. The Stack system has multi-level operations and maintenance capabilities that could quickly adapt for government use. Huawei Cloud also cooperated with more than one thousand ISV partners to provide more than two thousand joint solutions for government and enterprise customers. In addition, Huawei Cloud’s representative offices in more than 30 provincial-level administrative regions in China have helped Huawei’s business to gain cooperation and grow rapidly within three years. Although Huawei officially started its cloud service development relatively late, its business plans pushed Huawei cloud’s rapid growth since its establishment in 2019. 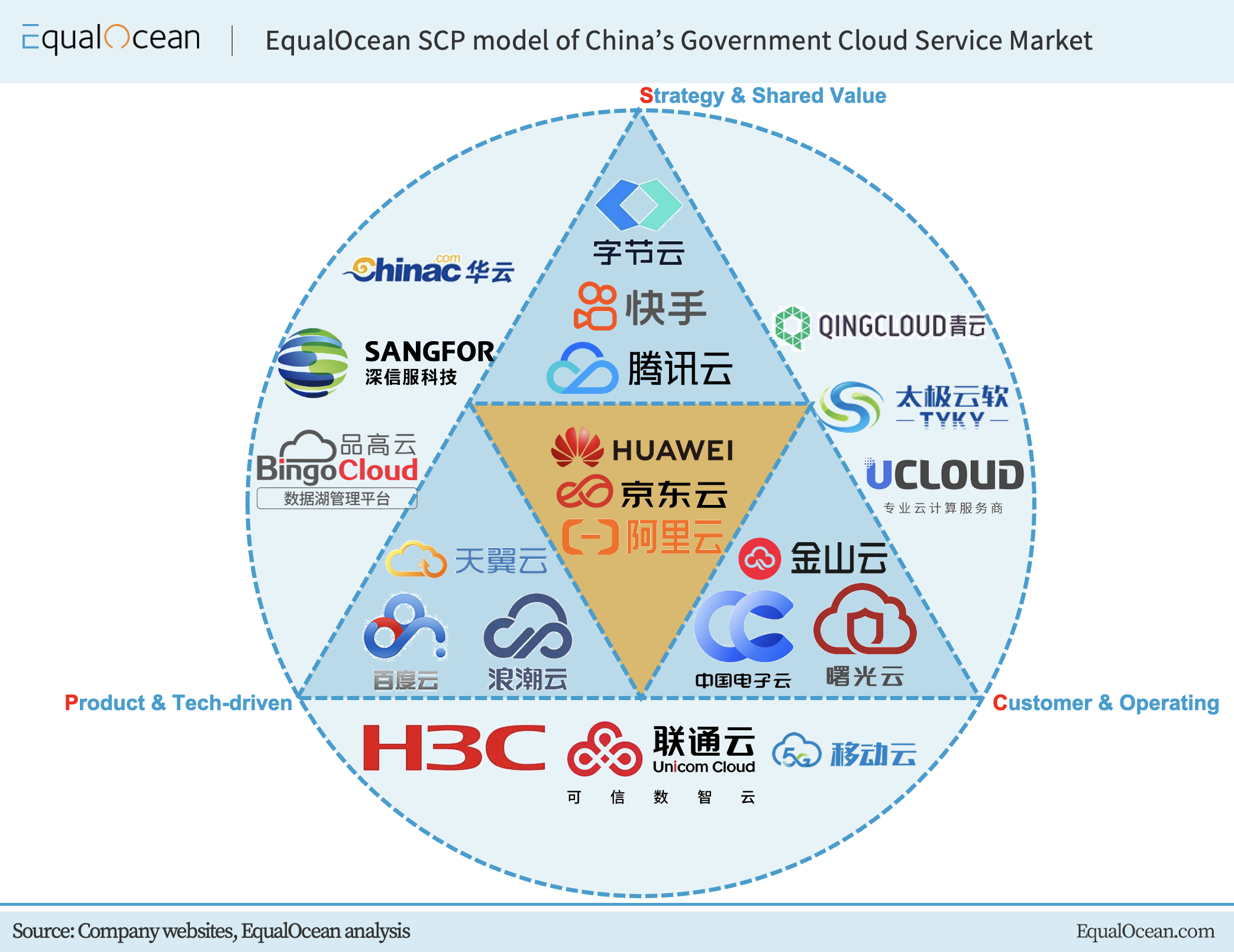 Besides the aspect of government cloud, we think that Huawei Cloud has done a great job building the cloud ecosystem and maintaining its original strength. Huawei Cloud is also the largest telecom equipment provider. Huawei Cloud provides lower costs to attract more business partners. In the past few years, Huawei Cloud also passed the zero-threshold policy to expand the scale of business rapidly. In addition, Huawei Cloud has formed a rich cloud ecosystem. It develops diversified cloud application scenarios such as games and videos. In 2022, Huawei cloud transit its business plan to help its partners and achieve a win-win situation. It has further enhanced its ecological attractiveness through new partnership programs and incentive policies. In Q1 2022, Huawei Cloud has released a variety of special incentives to gain more partners and improve the ability to serve customers better. We believe that with the core sense of serving customers, Huawei Cloud will win favors from the public, and therefore move further.

Looking into the financial data of Huawei Cloud, Huawei Cloud gained an operating income of CNY 20 billion in 2021, up 34% year-over-year. This is also the first time Huawei for released related financial data of its cloud service. We could also calculate Huawei Cloud’s 2020 operating income was CNY 15 billion, from the given information. This relatively large amount of operating income and high increase rate marked Huawei Cloud’s second place in China’s cloud service market. However, while looking at Huawei’s operating results as a whole, Huawei experienced a decrease of 13.9% in Q1 2022, indicating Huawei is facing difficulty in company transformation. After being forced to cut off the most profitable consumer business, Huawei is under the pressure of commercialization and finding new business growth points. We predicted that as Huawei Cloud’s financial data indicated a good sign, if Huawei maintains its idea of strengthening the segment of cloud service and works on the development of its products, Huawei might survive the current dilemma.

JD.com’s cloud, a sector that identifies itself as the one that understand the industry the most, started relatively late than Alibaba and Tencent. JD.com’s cloud was officially established on February 9, 2018. Even though it has less time to develop than the top giants, JD.com is catching up and is in the leading position in cloud computing, cloud storage, big data, the Internet, and others. After being integrated into JD.com Technology last year, JD.com has gained a clear definition of itself. JD.com identifies its cloud service as the technical representative of its company. JD.com also treats its cloud service as the one that provides external technical support.

We believe JD.com’s Cloud has a clear focus on its development of business. Besides the external cooperation, JD.com, as an e-commerce company, also focuses on the development of the supply chain. The current inventory turnover days of JD.com is nearly 30.3 days, with more than 10 million stock-keeping units in its self-operated product warehouse. If we compare the SKU with other companies, Costco, a well-known wholesale, Costco’s stock-keeping units are roughly 50 thousand. Through the comparison, we find out that JD.com’s cloud’s capability is incredibly with high product management skills. In terms of logistics, JD.com’s cloud also includes the warehouse and robots to improve efficiency. And because of the help of JD.com’s cloud, JD.com’s 618 shopping festive was a huge success from the perspective of the supply chain.

From our perspective, JD.com’s cloud is filled with the potential to become the next giant in cloud service. Because the current market size of JD.com in terms of e-commerce and supply chain marks JD.com’s status in this field. And with the help of the Matthew effect, JD.com might quickly combines the use of cloud service into the application of the supply chain and become the monopoly in this sector. With the addition of large cloud’s, JD.com might also be the absolute and far ahead lead in industries, such as the digital market.

To sum up, we analyze that the current cloud service market in China is filled with companies of different sizes. However, there are still more rooms waiting to be filled in, indicating more opportunities for companies to take the lead. Alibaba Cloud has become the first one in this field for many years. If Alibaba could make a breakthrough in its current condition and make technical and definitional improvements to cloud service, it is very likely that Alibaba could maintain its position. Tencent cloud is in the process of transformation. However, Tencent cloud is facing the problems of restricted industries and the lack of the retail market. Huawei Cloud’s clear business plans and sufficient cloud ecosystem provides itself a solid stepping stone for future development. If Huawei could survive from the pressure of commercialization, its cloud service could be a huge success, especially in the government cloud sector. JD.com’s cloud might be a future potential to lead if it stabilizes the current advantage in the supply chain and works on the development of external support, such as the digital economy.