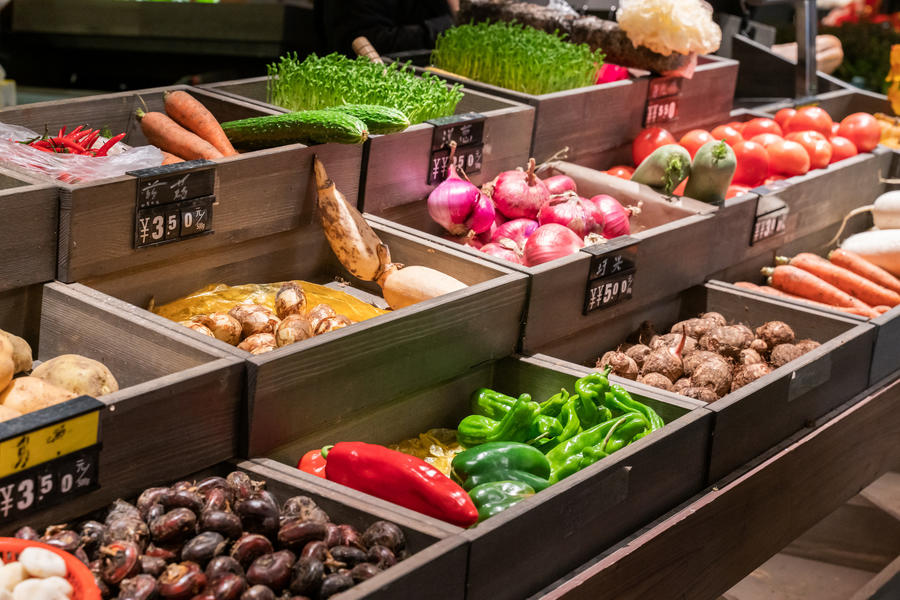 Online grocers in China have experienced a surge in demand during the pandemic and months of lockdown. Take the Shanghai-headquartered Dingdong (Cayman) Limited (Chinese: 叮咚买菜, DDL:NYSE) as an example. Its daily active users grew 66% year-on-year to over 5 million in March and the monthly active users topped 45 million, up 28% YoY.

The huge demand has also led to a rebound in its performance in the capital markets. Since April, Dingdong's share price has bucked the trend and increased sharply from its lows, doubling in three trading days. The same picture can also be seen in Tencent-backed Missfresh (Chinese: 每日优鲜, MF:NADSAQ) - its largest rival — whose shares rose 72% in four consecutive trading days in early April.

However, good times don't last forever; some of that pandemic-fueled boost now appears to be waning. Dingdong Maicai shares closed at USD 5.40 on June 27 with a market cap of USD 1.28 billion, while Missfresh was priced at USD 0.27 as of press time; the latter one has even had an eventful summer.

A feisty landscape is emerging in online groceries

The Chinese fresh grocery market is experiencing growth at a CAGR of 4.60% during the period spanning from 2021 to 2025, and is forecasted to top USD 976.11 billion in 2025. Given the promising future, tech giants including Alibaba Group (BABA:NYSE), Pinduoduo (PDD:NASDAQ), Meituan (3690:HK) and even the ride-hailing giant DiDi have all dived headfirst into this sector. 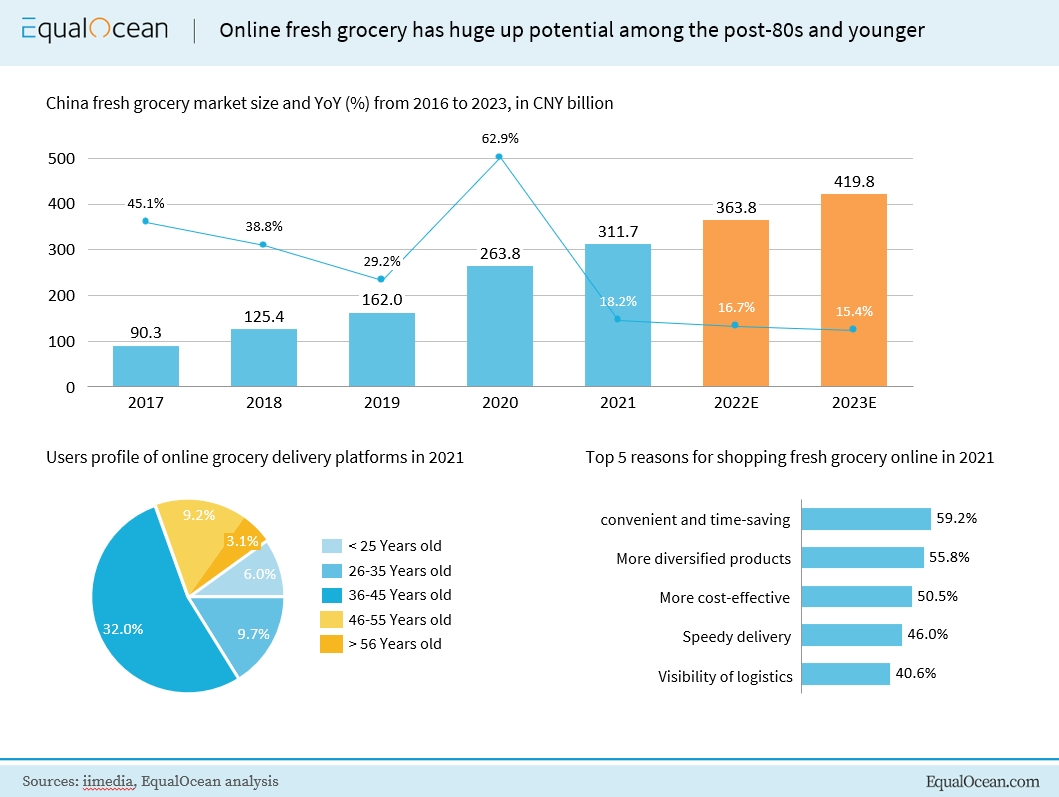 Freshippo (Chinese: 盒马鲜生) was launched by Alibaba in 2019 as an independent project combining a grocery store, restaurant and online delivery app, which offers 30-minute delivery using a chain of retail stores and smart logistics to optimize users' experience. There are currently close to 300 stores in China, with plans to develop a network of distribution centers, with its first hub in Wuhan. 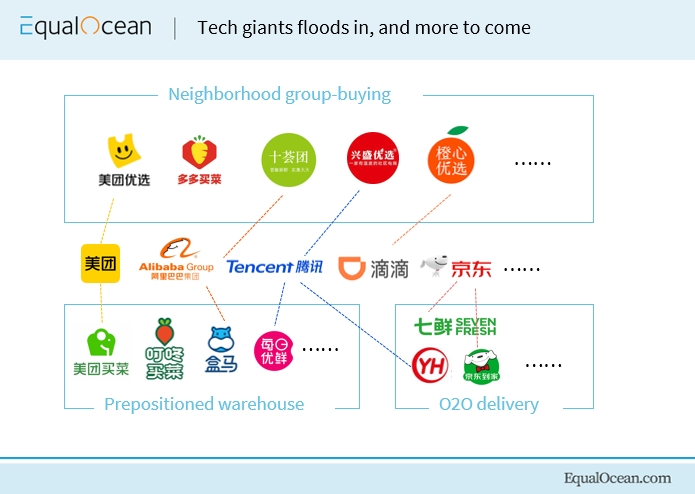 Missfresh and Dingdong Maicai take the lead, despite burning money

Nevertheless, the capital boost has also struggled to cover the continued losses of online grocers.

In its latest released quarterly report for the third quarter of 2021, it reported a net loss of CNY 973.7 million (USD 151.1 million), much larger than the CNY 482.8 million net loss posted in the same period of 2020. And the continued operating costs and expenses have also concerned investors. Missfresh's operating expenses widened about 70% to CNY 1,231.4 million (USD 191.1 million) in Q3 2021, compared to the same period of 2020, with doubled fulfilment expenses. Missfresh is expected to lose between CNY 3.737 billion and CNY 3.767 billion in 2021, which will once again break its loss record.

In addition, Missfresh also received a warning letter from the Nasdaq Listing Qualification Department dated May 19, 2022, as it failed to timely file its 2021 annual report; a week later, the company received its second fine execution of the year, obliging it to pay over CNY 5 million in fines. In early June, Missfresh received another notice from Nasdaq, claiming that the closing bid price of the company's American depositary shares (ADSs) during the previous 30 business days was below the minimum USD 1.00 per share set forth in Nasdaq's listing rules.

Prepositioned warehouse delivery: Where are the problems?

This is the primary distribution model adopted by Missfresh, Dingdong Maicai and Meituan Maicai, in which each prepositioned store or distributed warehouse is a small to medium-sized distribution centre. Typically, each prepositioned warehouse carries about 5,000 different items to meet the demand for about two days and could serve customers within a range of 1 to 3 kilometers. 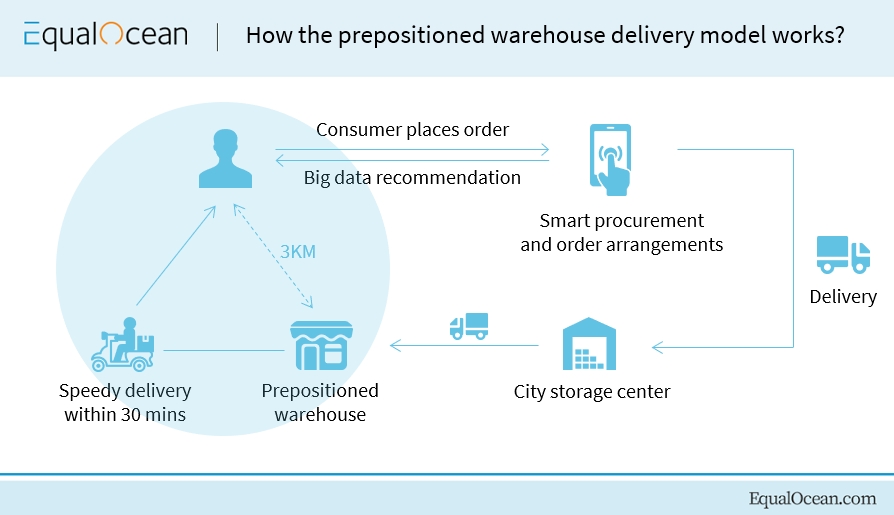 While securing the timeliness and efficiency of delivery, the drawbacks of this pre-positioned model are equally obvious.

First of all, the prepositioned warehouse is an asset-heavy model, and the cost of distribution and personnel operations is also far higher than that of traditional e-commerce platforms or community group buying. According to Northeast Securities, the fulfilment cost per order under the prepositioned warehouse is twice as high as O2O delivery and platform business, and even six times larger than that of neighbourhood group-buying. At the same time, the low gross margins for fresh grocery, coupled with the large upfront investments and high requirements of cash flow have further posed a lot of pressure on the players in this track.

Secondly, the prepositioned warehouse model can only work in Tier-1 or developed Tier-2 cities including Beijing, Shanghai, Guangzhou and Shenzhen. The reason behind this is also very understandable. The main highlight of this model is the 'speedy delivery', which is in line with the demands of those time-pressed consumers. While when it shifts to other lower-tier cities, consumers generally value cost-effectiveness more than the time.

A Beijing-based front-liner deliveryman who worked at Missfresh told EqualOcean that the volume of orders at peak almost halved compared to when he joined Missfresh. “The increase in price is a key reason. Moreover, previously the threshold for free shipment is only CNY 39, while it was raised to CNY 49 this year. And there are also fewer promotion campaigns as before.” He also added that several of his colleagues were laid off as the warehouses have been shut down for “unknown reasons”. “I heard the news of Missfresh’s unsatisfying stock performance, frankly speaking, I don’t care that much as the company has the cash flow to pay us. But several of my colleagues resigned the job recently and turned to other platforms like Dingdong Maicai, that would be more worrying me.”The deliveryman asked to remain anonymous.

Challenges remain, and no one wins the game yet

However, although the market is big enough, online grocers haven’t all been doing well.

In January 2022, eight-year-old Meicai.com (Chinese: 美菜网) was reported to be set to lay off another 40% of its staff after a big-scale downsizing due to the business contraction. And previously, on May 30, Dingdong Maicai was reported to be about to quit its business in several cities, including Xuancheng and Chuzhou of Anhui province, Zhongshan and Zhuhai of Guangdong province.

If we look deeper into the reasons behind their lacklustre performance, logistics, costs and traffic are three keywords that cannot be ignored.

Most fresh e-commerce players have tended to underperform in supply chain and logistics management, especially during the pandemic, a surge in orders was bound to have posed challenges for their supply chains, distribution, manpower, and payments. Shanghai's month-long lockdown acted as a good showcase of these grocers' abilities.

"The success rate for placing orders via any of these apps is all low, and I have not secured even an order in the whole April," said Tang, a banking practitioner who had been locked down in Shanghai for 70 days. He also told EqualOcean that Dingdong Maicai slightly outperformed other platforms as the pandemic eased in May in terms of categories of goods, speed of delivery and price. "After the pandemic, I won’t use them anymore, especially Freshippo and MissFresh."

Cost control is another important area of challenge. High loss rates and low gross profit margins have been an ongoing challenge for the fresh food e-commerce segment. Moreover, fresh food e-commerce merchants stumbled upon a large number of new users in a short time during the outbreak, as online delivery acted somewhat like the "only" way for people who are trapped at home. Nevertheless, the demand could decline when life comes back to normal. That is to say, how to maintain users and achieve order transition are of great importance to further survival.

At present, most e-grocers are still in the same boat when it comes to a major challenge to the industry — turning a profit, although the performance and supply chain capacity has been well improved. Given the higher competitive intensity and evolving status, finding each one’s specialty would be the only way to survive. In other words, there is plenty of room for growth and development in the fresh grocery delivery industry in the future, but it will still take time.