360 DigiTech's core competencies of asset-light model and technology focus offer a bright future. In the first quarter of 2022, the firm outperformed its competitors in terms of user amount, total loans granted and revenue. However, it operates in a market that has been performing below expectations as risks mount and profitability decreases. 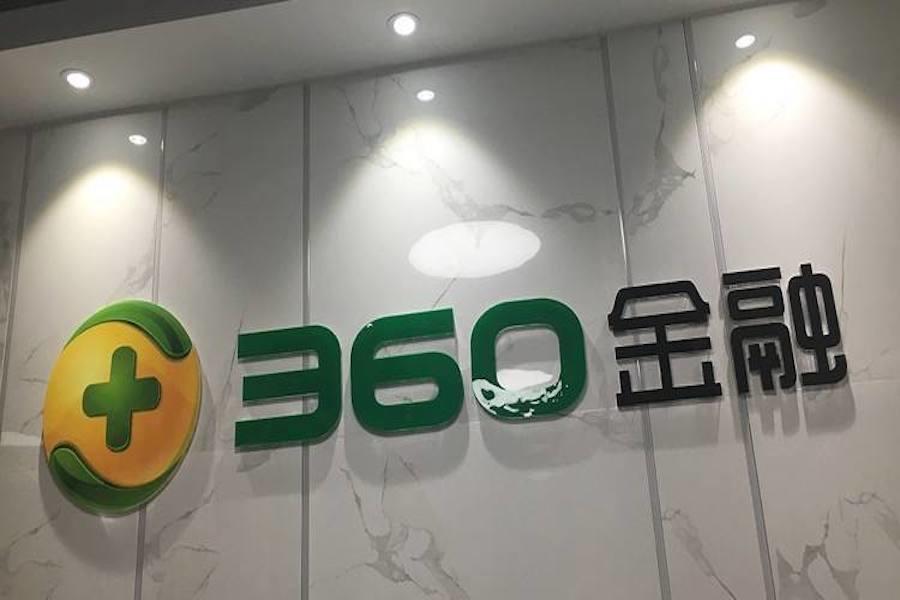 The need for development of financial technology has become a global consensus, and China is not exempt from this. With supportive policies and adequate infrastructure, it has created a vibrant industry that boasts a variety of companies that focuses on services including payment, wealth or insurance technology and lending. Besides, it is also the largest in the world in terms of investment flows. In 2021, the market witnessed its best year so far in terms of profit and cash reserves.

Nonetheless, 2022 has become more challenging for the financial technology industry as pressure piles on from different sides. Leading companies in the market such as 360 DigiTech (QFIN:NASDAQ), LexinFintech (LX:NASDAQ) and FinVolution Group (FINV:NYSE) all experienced a drop in revenue and other metrics. For instance, 360 DigiTech's net profit margin decreased from 37.4% in the first quarter of 2021 to 27.2% in the same quarter of this year. Returns on asset also did not last, but fell to a low of 3.4% in this quarter compared to 5.28% in the first quarter of 2021. Moreover, the re-borrowing rate has reached a recent high of 84% to 88% and future growth remains a concern. 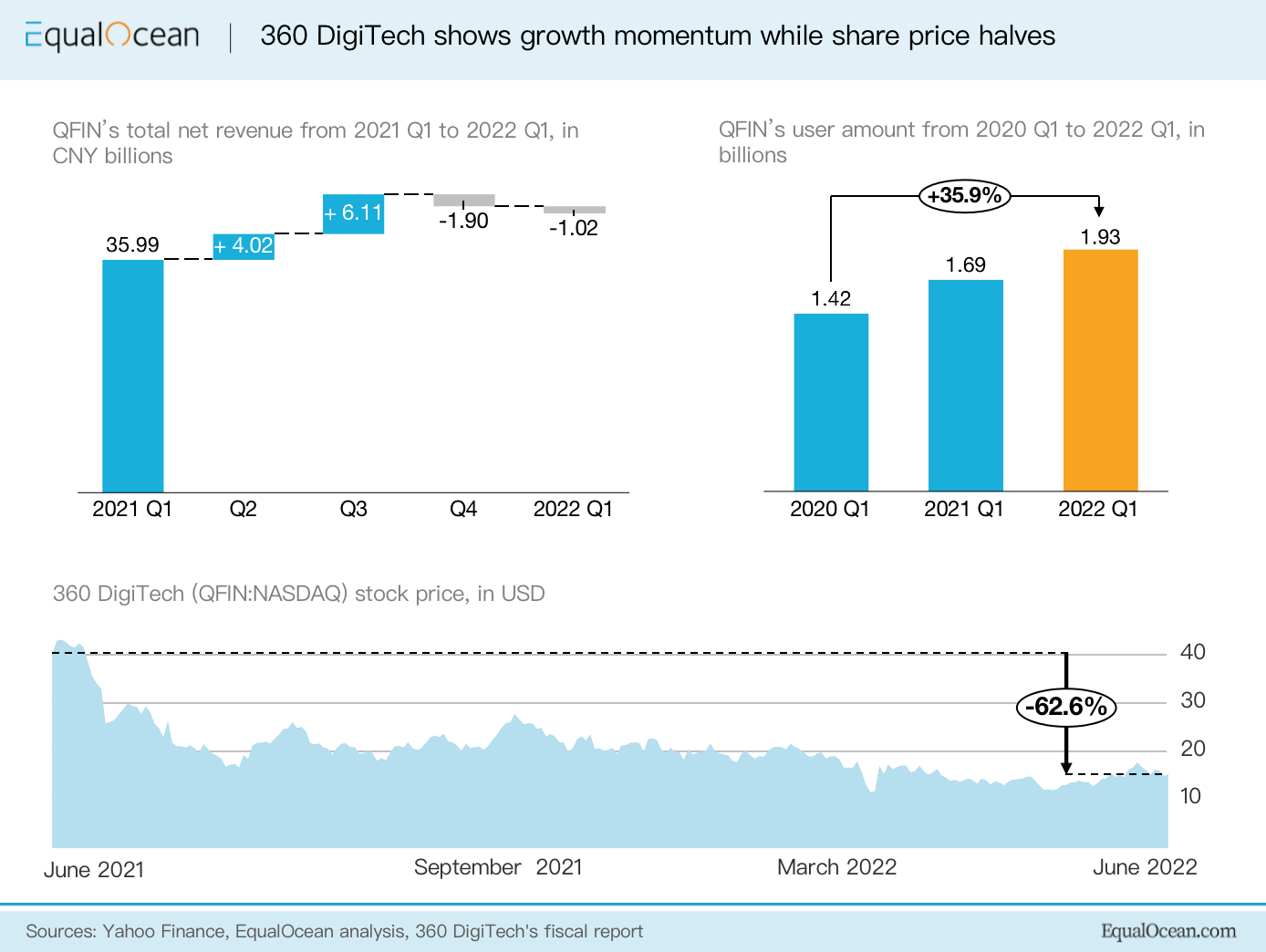 Examining 360 DigiTech in depth, it is a data-driven and technology-empowered digital platform that provides credit-driven services to match borrowers with financial institution partners. The company's stock price experienced a steady fall for the trailing twelve months. However, its price-to-earnings ratio of 3.06 as of June 22 is up to industry standards. It is close to FinVolution Group's 3.81 and higher than LexinFintech's 1.14. 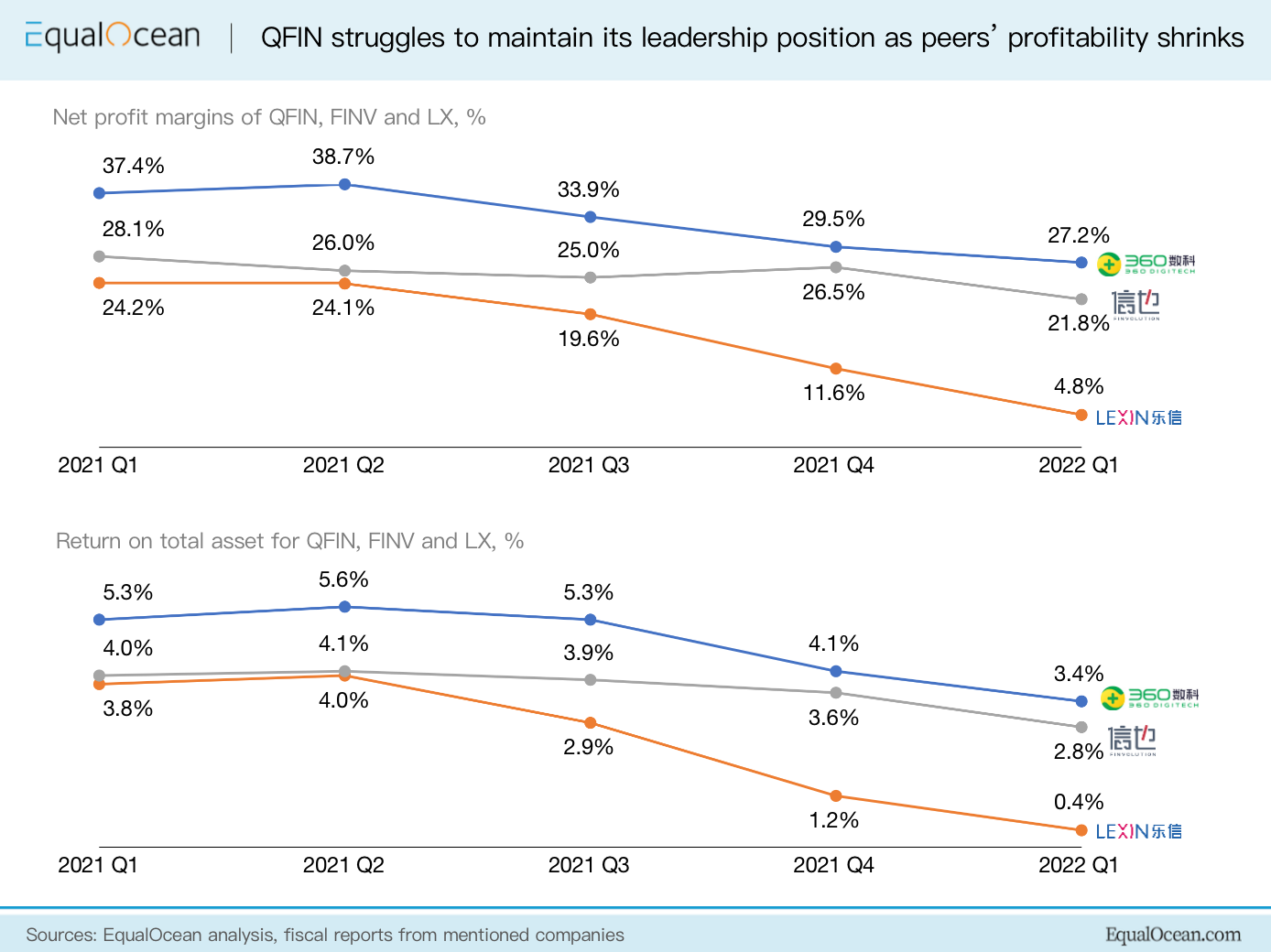 In the first quarter of 2022, 360 DigiTech outperformed its domestic rivals on multiple fronts. It has around 193 million users, the highest among all competitors. Besides, the firm's revenue reached CNY 4.32 billion, which is higher than LexinFintech's CNY 1.71 billion and FinVolution Group's CNY 2.44 billion. It also grants the most amount of loans of CNY 998 billion, nearly double the amount of that from its rivals.

One important encouraging feature of 360 DigiTech is that it is improving profits. It's good to see that its basic earnings per share (EPS) has grown from CNY 17.32 at the end of 2019 to CNY 37.64 in 2021. Shareholders would be happy with that 117% gain over two years, with no doubt.

EPS shows that growth is sustainable and combined with a high earnings before interest and taxation (EBIT) margin, it's a great indicator for 360 DigiTech to maintain its competitive advantage in the market. As of Q1 2022, the EBIT margin for QFIN was 92.84%, while the figure for LX and FINV was 21.03% and 18.91%, respectively, per Macrotrends.com.

In terms of valuations, there has also been a huge turn over the past year. In June 2021, we proposed that there was an urgent need to reassess 360 DigiTech, given its strong financial performance but a big gap in P/E ratios from its peers. And one year later, although all fintechs witnessed a contraction in profitability, QFIN recorded a relatively stable up-down interval and booked a P/E ratio of 3.24 as of June 24, 2022.

360 DigiTech is one of the earliest platforms in the industry to proactively initiate the transformation of reducing the proportion of self-operated loans and improving loan facilitation. This turned out to be an informed decision.

In the third quarter of 2019, 360 DigiTech first proposed its new strategic target for adopting the 'capital-light,' or more commonly as 'asset-light' business model. More colloquially, this refers to the company directly steering the borrower to their cooperative financial institution, while collecting service fees from credit evaluation, credit management, or other technical-related services.

According to the financial results of 360 DigiTech for the first quarter of 2021, the total loans originated by financial institutions were CNY 98.83 billion, of which CNY 53.32 billion (53.9%) was under an asset-light model and other technology solutions, achieving an increase of 43.2% over the same period in 2021.

Haisheng Wu, CEO of 360 DigiTech, stated that "...over 50% of the loans were facilitated under the capital-light model and other technology solutions..." and it is a "fundamental change to the nature of our business, from being capital-driven to technology-driven."

In policy terms, the tightening regulatory rules pose a little impact to loan facilitators like 360 DigiTech – even as fintech giants like Ant Group and JD Digits may suffer – as its targets are excess leverage and systematic risks. It creates opportunities for 360 DigiTech to jump a queue. The asset-light model is hence the core strategy of reducing the regulatory and credit risk. Besides, 360 DigiTech is trying to use less capital and more technology-powered services to open up more opportunities, both in terms of client acquisition and risk management.

Moreover, with a few innovations and technologies, for example, Argus RM Model, Intelligence Credit Engine (ICE), Cloud Bank System, Cosmic Cube System, Apollo Platform and AI Robots, 360 DigiTech is working hard towards the 'tech side' of the fintech business as well as being technology partners with banks. The strategic collaboration with Kincheng Bank (KCB) is a good example.

Overall, 360 DigiTech's stock has a mixed outlook. Although the firm managed to outperform domestic rivals thanks to its competitive advantages – the technology-aided decision process and asset-light model – the market performed below expectations during the first quarter of 2022 and players inside the industry will have to bear the consequences.

CONTACT US
Scan QR code to contact us for professional consulting services
Next article
Leekr Technology: New Competitor in Chassis-by-Wire