BeiGene, a leader in China's novel pharmaceutical industry, recently received approval in Kuwait, Bahrain, and Qatar for its medication BRUKINSA (zanubrutinib). Previous contracts with major biopharma have produced substantial licensing income, but they did not lessen BeiGene's financial burden. 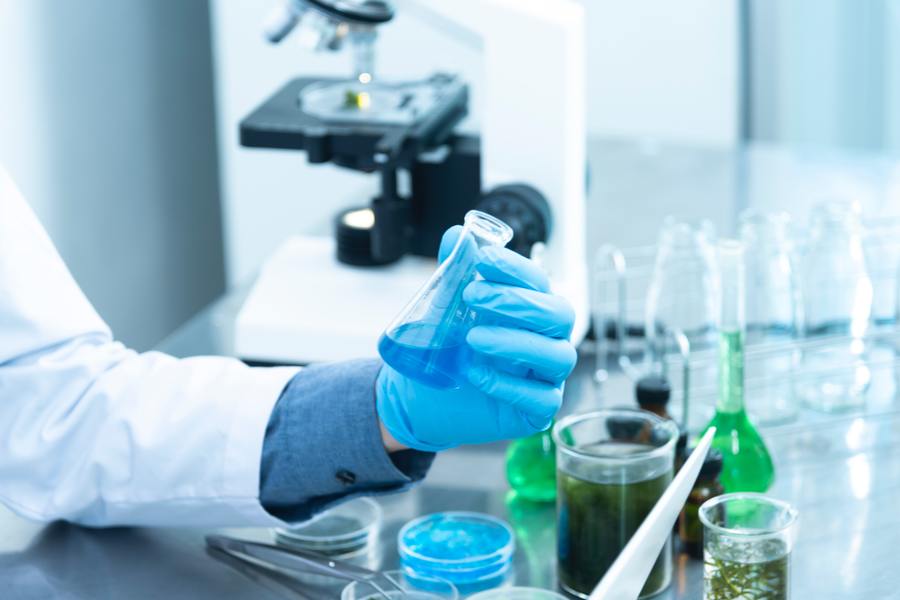 A Pioneer in Going Abroad

BeiGene's flagship product BRUKINSA (zanubrutinib), recently received approval in Kuwait, Bahrain, and Qatar, bringing the company's total approvals to 50. This is only a tiny portion of BeiGene's journey. Only nine years after its founding, BeiGene made history by developing China's first FDA-approved new drug, Zanubrutinib, to treat non-Hodgkin's lymphoma and demonstrate its proven innovative capability. On the other hand, collaborating with other leading biopharma companies, such as Novartis, has undoubtedly led it to quickly become one of the largest biopharma companies in China and even the global market.

On October 28th, 2010, BeiGene was founded in Beijing. As the name suggests, its goal is to provide cancer patients worldwide with affordable and innovative cancer treatment. BeiGene has been around for 12 years and has grown into a large biopharma company with over 8000 employees worldwide and 1200 clinical professionals. The company is tri-listed and is now traded on exchanges in Shanghai, Hong Kong, and the United States.

BeiGene is well-known for its in-depth understanding and extensive oncology pipelines to treat solid tumors, lymphoma, Waldenstrom's macroglobulinemia, chronic lymphocytic leukemia, and other diseases by leveraging molecularly targeted agents (Zanubrutinib, Pamiparib, and Lifirafenib), immuno-oncology agents, and combination solutions. As previously stated, one of its most well-known products is Zanubrutinib which was regarded as a significant step forward for the Chinese biotech company, moving from manufacturing me-too to best-in-class or even first-in-class medication. Since then, an increasing number of Chinese companies have begun to participate in the discovery of novel drugs, making China one of the world's fastest-growing markets. 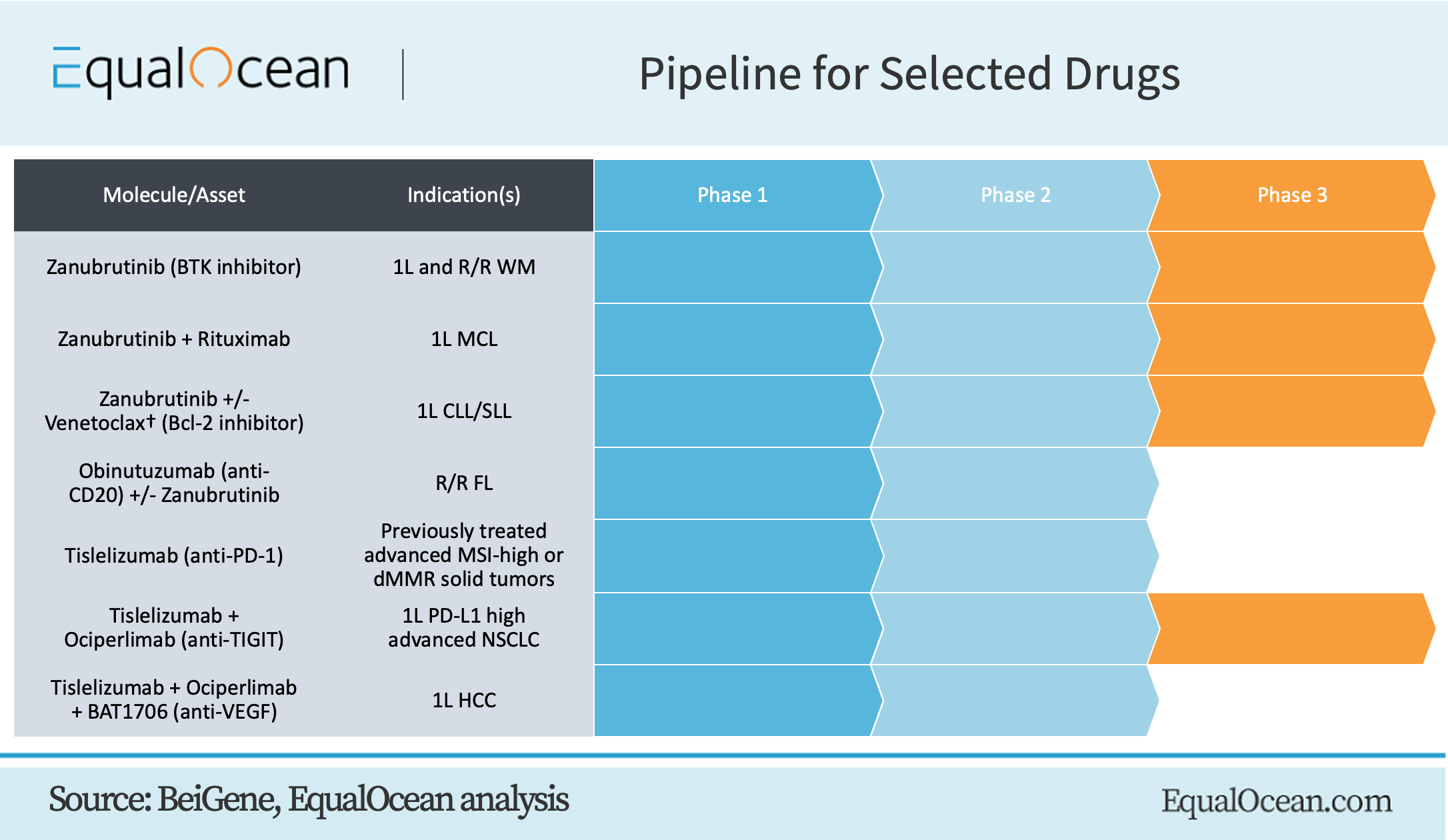 BeiGene, the pioneer of China's novel drug manufacturing, maintains its leading position in the domestic market while actively pursuing collaboration with big biopharma worldwide to expand into the international market. In December 2021, BeiGene announced a partnership with Novartis on its TIGIT inhibitor, ociperlimab. Novartis made a USD 300 million upfront payment, roughly USD 700 million in additional fees, and USD 1.895 billion in milestones on the way to acquiring the overseas rights of BeiGene's TIGIT to diversify its tumor treatment portfolio. Furthermore, in January 2021, Novartis spent USD 2.2 billion to licensed-in BeiGene's Tislelizumab to compensate for the lack of PD-1 inhibitors in its pipeline and to facilitate the R&D of its combination therapy. As a result, BeiGene is one of the few Chinese biopharma companies with such a high-priced licensing agreement with a foreign company.

The market is hot, but risks remain

As we claim in the Zai-Lab article, the novel drug market is booming and becoming a 'red-sea' market in the Chinese. According to Leadleo, from 2020 to 2025, China's novel drug market is anticipated to grow at an 18.5% compound annual growth rate (CAGR) and will reach CNY 254.9 billion in 2023, powered by the vast unmet demand and increasing aging population. And that led to the increased entrance of many companies who wanted to take a slice of the pie.

On the other hand, global financing for new drugs has slowed. According to PharmaInvest, in April 2022, the funding and investing activities in new medications decreased by 19% monthly and 47% yearly to 77. In the primary market, the number of IPOs fell by 57% year on year, while the number of funds raised fell by 78% year on year, indicating a significant decline.

According to the Chinese National Pharmaceutical Industrial Information Center (PHIIC), 68 novel drugs (including in this category are novel drugs that were first approved in China and were imported, as well as class 1.1+1.2 improved chemical drugs, class 1+5.1 new chemical drugs, and class 1 biologic drugs) were approved, reaching the historical high of the number of approved novel drugs. However, none of the Chinese company's approved novel drugs were "first in class," and they were instead classified as improved new drugs. This is a microcosm of Chinese pharmaceutical manufacturing in the innovation war.

Yishi Li, a senior partner at HaoYue Capital, believes that biotech companies' inability to innovate will spell doom – but in China, people are only concerned with how far their product is from commercialization.

Some biotech companies fall into the trap of purchasing existing pipelines and making minor changes to the target to appear "innovative" and capitalize on the structural transformation of the biotech industry. As a result, to be worth investing in, a biotech company must have a high entry barrier, particularly in technology, a promising future of creating something new, and market opportunities. 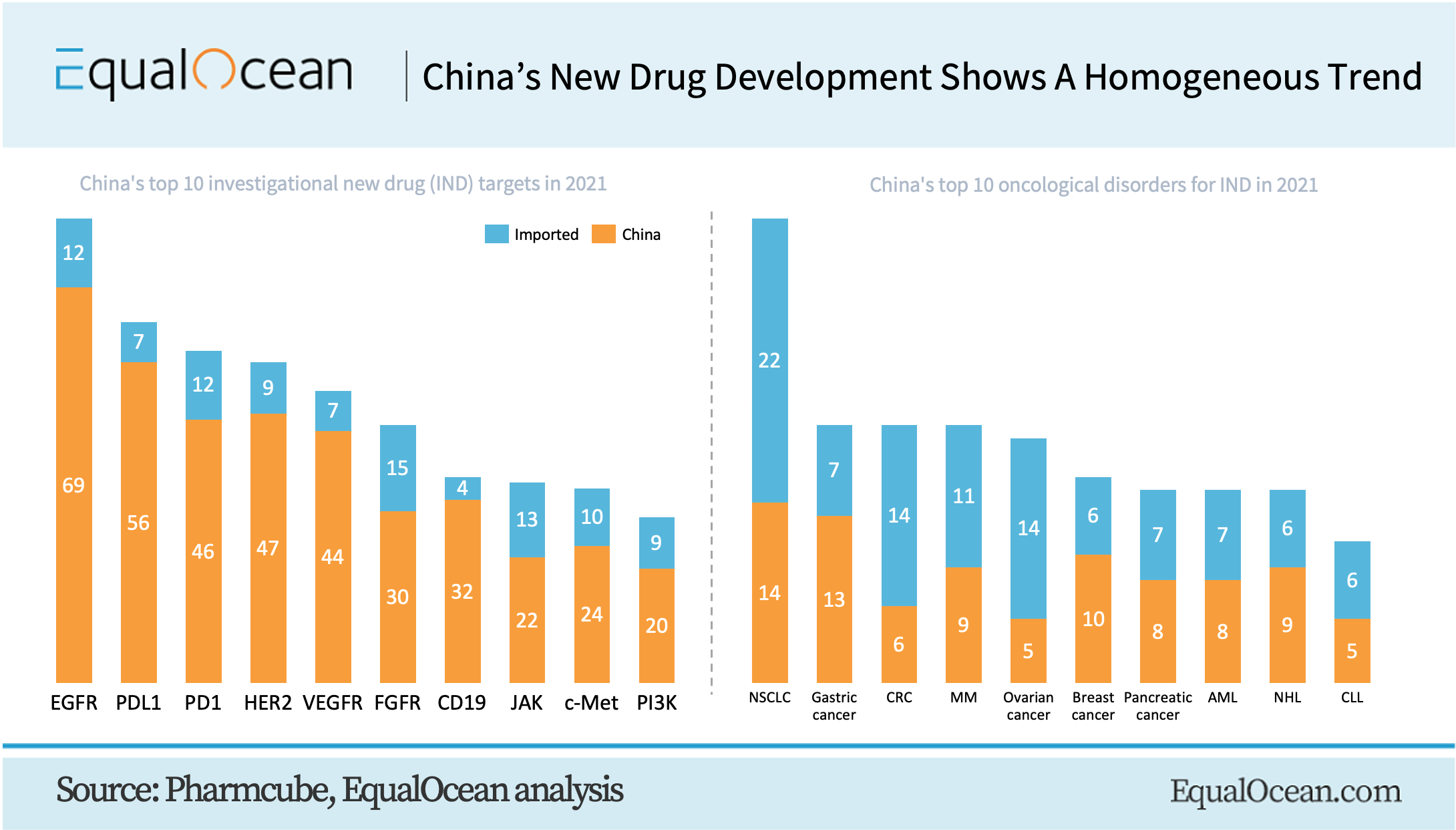 Thus, the most significant challenges that BeiGene must address are market opportunities, as the PD-1 and TIGIT targets become the most popular, resulting in fierce competition and the consumption of unmet demand. BeiGene has taken the lead in researching and developing some contentious targets to combat this problem, but because biotech companies must always trade risk for reward, their future remains uncertain if R&D and commercialization fail. In the meantime, Jiangsu Hengrui Medicine, Junshi Bio, Zai-Lab, Innovent Bio, and BeiGene are taking different approaches to the dangerous sea of innovation.

Hengrui's research emphasis has shifted from fast-follow drug development to discovering new biological targets and expanding indications coverage. Unlike BeiGene, which has a more vertical oncology focus, Hengrui broadens its horizon by including oncology, cardiology, metabolism, pain, autoimmunity, anti-infection, and other diseases. Furthermore, Hengrui made a wise target selection decision. Aside from well-known targets such as PD-L1/TGF-βRII, IL-4R, CTGF, JAK1, and BTK, Hengrui's targets have no medications in clinical trials or on the market.

Aside from JS001, Junshi created the first FDA-approved oncology targeted anti-BTLA monoclonal antibody, JS004, the company's biggest bet and the second most expensive medication it is currently developing. The broad range of indications coverage and the ability to be used as a monotherapy are two of JS004's key strengths.

Sintilimab, an anti-tumor PD-1 antibody developed by Innovent Bio, is the main competitor to BeiGene's Tislelizumab in treating non-squamous non-small cell lung cancer (NSCLC) and classical Hodgkin lymphoma. Both have made it into the catalog of medicines covered by the national health insurance system, and each has some advantages and disadvantages. Sintilimab has a low safety hazard in treating squamous cell lung cancer, and SQCLC and Tislelizumab have a high overall response rate.

Zai Lab has pursued the license-in strategy aggressively, acquiring pipelines from other companies to diversify its pipelines and quickly address unmet demand while also facilitating its research. Zejula (niraparib), its flagship drug, has been approved for the maintenance treatment of first-line ovarian cancer and has been added to the list of drugs covered by the national health insurance system.

Although previous agreements with big biopharma have generated high licensing revenues, they did not relieve BeiGene's financial burden. According to its FY 2021 financial report, BeiGene is still losing money, with a net loss of USD 1.41 billion. Revenue increased by 281% year-over-year, reaching USD 1.18 billion. R&D, the lifeblood of biomedical companies, increased by 12.69% year on year and fell slightly compared to the 39% increase from FY 2020 to FY 2019. Compared to large biopharma companies, which spend on average 25% of their revenue on R&D, BeiGene has a significantly higher R&D expense of 1.24 times its revenue in FY 2021.

However, taking a broader view, we expect BeiGene's R&D investment to stabilize. According to the report, BeiGene's R&D expense increased by 152% in 2018, 36.6% in 2019, and 39.6% in 2020, but only 12.7% in 2021. Furthermore, while selling, general, and administrative costs have remained stable, we anticipate that they will rise further, as BeiGene claims that additional investment in promotion, share-based compensation, and infrastructure will be required if new drug research and development go well. 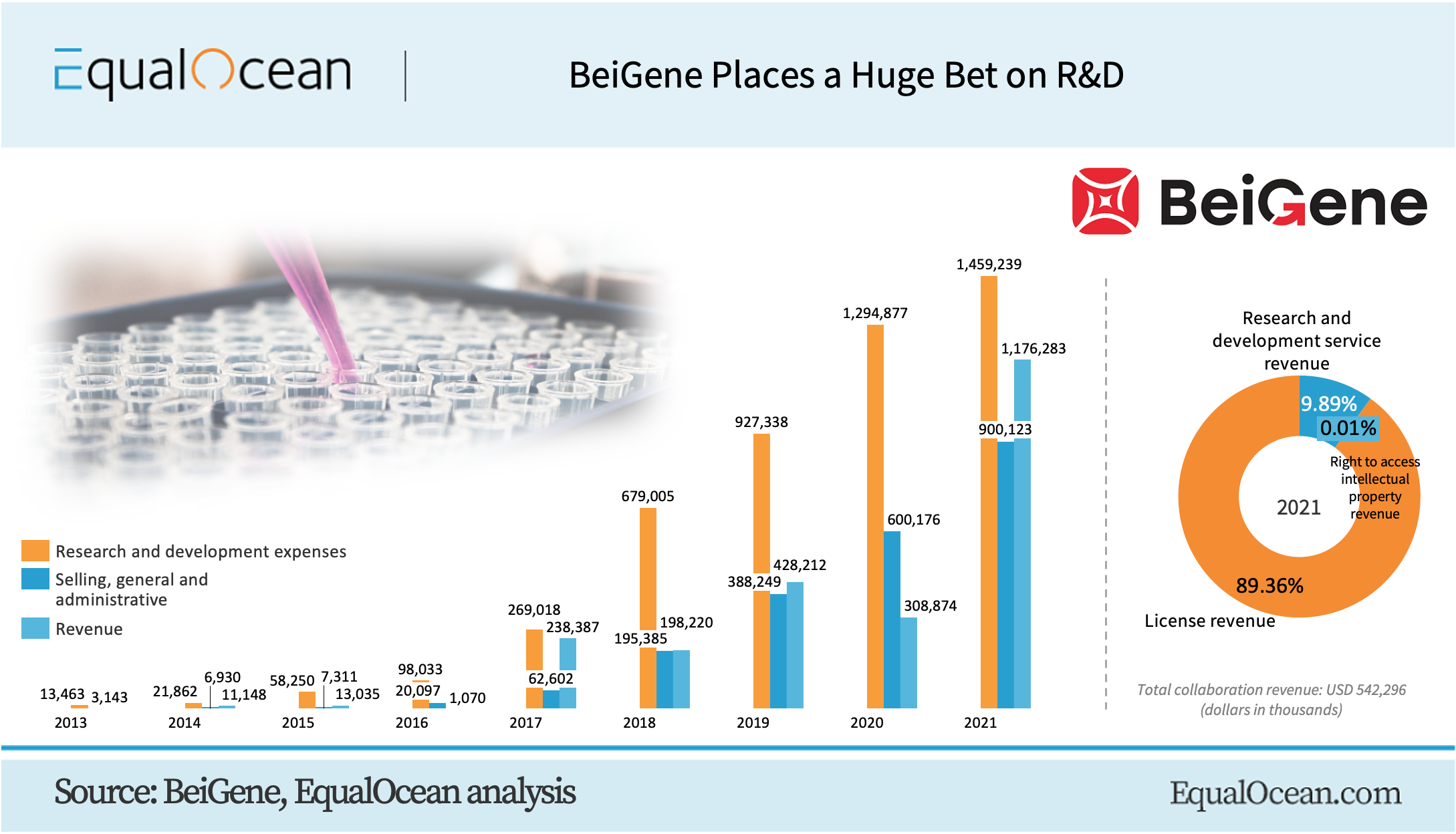 We should also consider the dramatic change in the company's management structure. Several months ago, in February 2022, BeiGene appointed a new Chief Medical Officer of Solid Tumor, Dr. Mark C. Lanasa, to replace Yong Ben, who resigned from the CMO position. A month later, BeiGnee announced Jane Huang's resignation, the hematology CMO. Yongzheng Chen, On June 23rd, 2022, BeiGene announced the resignation of its former non-executive director, who was also a member of the Compensation Committee of the Board and the Medical Affairs Advisory Committee.

BeiGene's R&D potential is widely acknowledged, but we also see risks in clinical trials, market uncertainty due to fierce competition, China's Investigational New Drug (IND) and New Drug Application (NDA) policy changes, and their long-term overseas BD strategy. As a result, we give it a neutral rating.

We took the weighted average EV/EBITDA of the Healthcare sector (9x) and six selected companies: Novartis (3.6x), Roche (4.1x), Prifzer (6.6x), Zai-Lab (9.5x), Hengrui (10.7x), and Legend Biotech (70.7x), and used the result of 8.16x as BeiGene's benchmark. Based on that, we forecasted BeiGene's stock price will reach USD 175, up 3% from today's price of USD 169.83, using the EV/REVENUE multiplier approach rather than the P/E or EV/EBITDA multiplier because pharmaceutical companies typically struggle to generate profit in their early years.

CONTACT US
Scan QR code to contact us for professional consulting services
Next article
Power Chips and Smart Cars: EVs Continue to Evolve and Spread