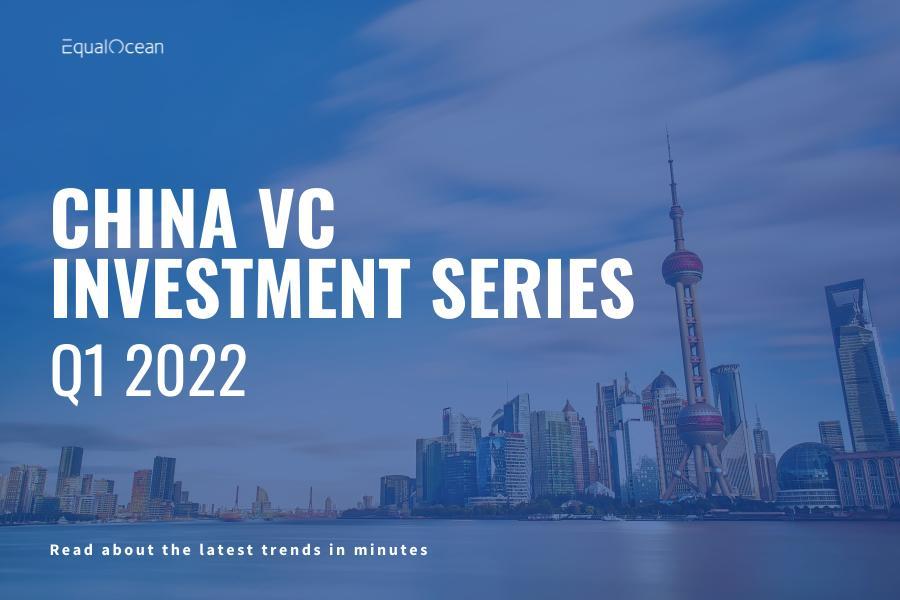 With a spike in new infections caused by the Omicron strain and the ensuing lockdowns, China’s economic rebound appears to be in danger of a downward spiral. But this could also be a blessing in disguise for the healthcare industry, which has already experienced breakneck growth since Covid hit in 2020.

The global race to develop vaccines, accelerated due partly to rising application of mRNA technology, has put big pharmaceutical companies like Moderna and Pfizer under the spotlight. But this golden opportunity for the healthcare space doesn’t end there and certainly isn’t restricted to big pharma working on Covid drugs. As standards of living improve, people are naturally inclined to spend more on wellness and health. This has been the driving force of a large number of record-breaking investments in China’s biotech startup ecosystem.

According to incomplete statistics, domestic VC-backed healthcare companies raised over CNY 100 billion (USD 15.71 billion) across 420 deals in the first quarter of 2022. Well-known investors such as Sequoia Capital China, IDG Capital and Shenzhen Capital Group have topped up.

For healthcare, we at EqualOcean have identified 20 companies worth watching in Q1. The core criterion is to receive venture capital investments of over USD 30 million on average or the equivalent value in CNY in a single round. When compiling the list, we also considered factors such as growth prospects, brand influences and reputation, as well as planned expansions. 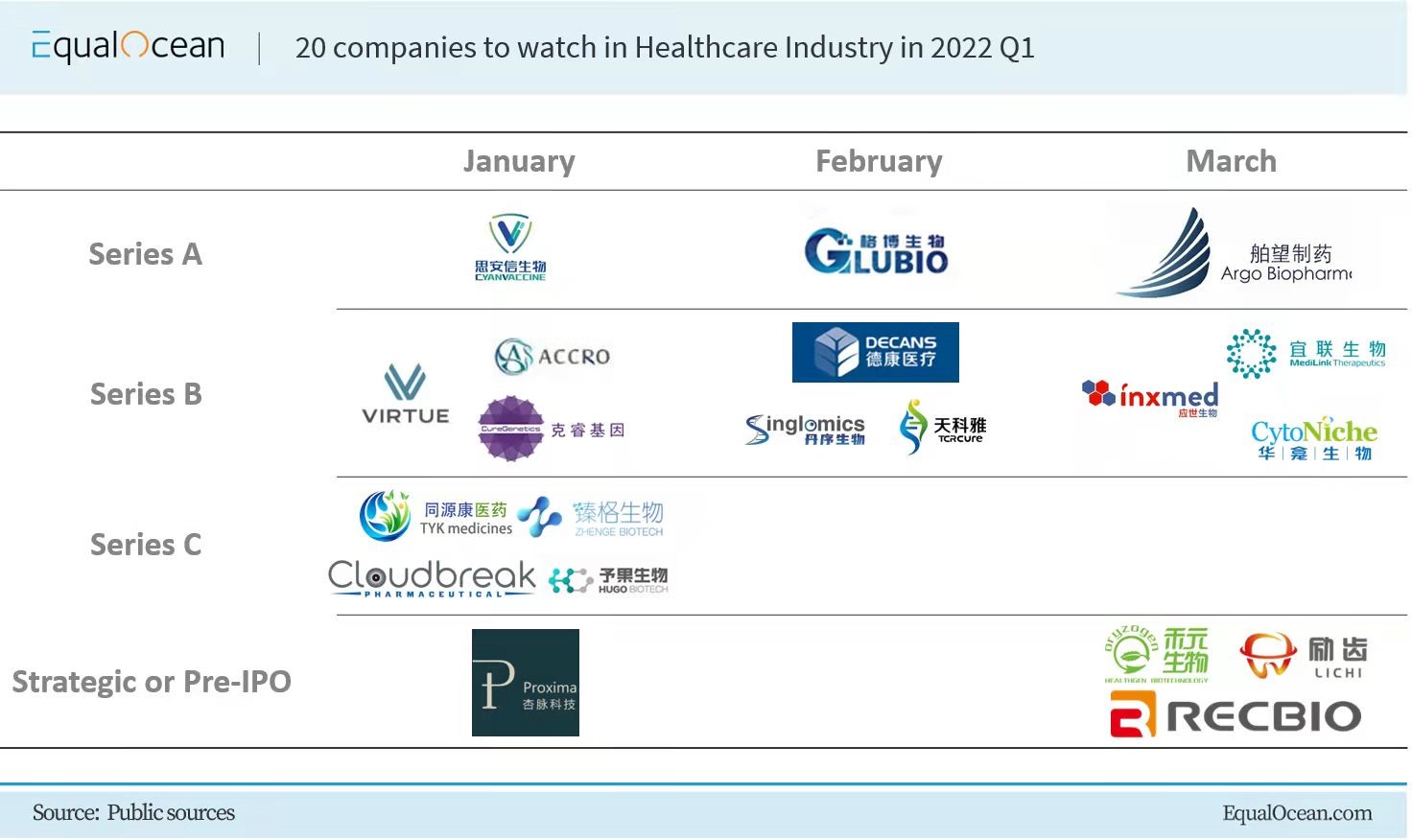 Cloudbreak Pharmaceutical (Chinese: 拨云制药), a clinical-stage biotechnology company, raised USD 130 million in a Series C financing round from Dinghui Baifu, GTJA Investment, DYEE Capital and other investors. It was founded in 2018, focusing on ocular drug development. Dr. Jinsong Ni, founder and CEO of the company, worked at Allergan, Wyeth and Pfizer.

In its Series B financing round in February, Decans Medical (Chinese: 德康医疗) received CNY 500 million from investors including Hangzhou Bay WITMED Industry Fund and Lanson Investment. Decans Medical has been focused on high-performance orthopedic implants and surgical technology systems since its establishment in 2012. The founder Dr. Xu Xiaobo worked at Peking Union Medical College Hospital and Harvard Medical School.

Innovative vaccine developer RecBio(Chinese: 瑞科生物) received USD 53 million in keystone investment from an investor group including SCHP and Sequoia Capital China in March before its IPO on the HKEX on March 31. Its products include HPV, 2019-nCoV and shingles vaccines. Dr. Liu Yong had worked at the Chinese Center for Disease Control and Prevention before he founded the company in 2012.

Argo Biopharma (Chinese: 舶望制药), an RNAi drug developer, closed its Series A round of funding worth over CNY 400 million in March 2022. This round was led by Loyal Valley Capital and also backed by CPE Asset, Tao Capital, and other investors. It was founded in 2021 by a group of talented individuals led by Shu Dongxu with deep RNAi drug development experience.

Hongtai Aplus and South China Venture Capital, Shenzhen Capital Group, Oriza Holdings, GF Xinde Investment and Sanhua Hongdao injected over USD 50 million into Accro Bioscience (Chinese: 爱科诺生物) in a Series B funding round. Accro Bioscience was founded by Dr. Zhang Xiaohu and Dr. He Sudan in 2017, focused on the molecular mechanism of regulated cell death and the related pathogenesis in human diseases.

Proxima (Chinese: 杏脉科技), a medical imaging intelligent equipment developer under Fosun, received CNY 337.5 million in a strategic round of financing from Fosun Pharma, Yadong Zhijian and Fumai Investment in January. It was established in 2018, focusing on medical imaging, pathological artificial intelligence software and digital solutions. He Chuan, formerly a senior executive at Fosun, serves as Proxima's CEO.

CytoNiche (Chinese: 华龛生物) completed a nearly CNY 300 million Series B round of financing led by Gaorong Capital,  CICC Qide Fund and CICC Qiyuan in March. CytoNiche was launched by Professor Du Yanan and its research team at Tsinghua University in 2018. It is focused on creating an original 3D cell "intelligent manufacturing" platform, and provides a total solution for the large-scale customized amplification process of cells based on 3D microcarriers.

Singlomics (Chinese: 丹序生物) closed a nearly CNY 300 million Series B round of financing in February. Legend Capital and Magic Stone Investment led this round. It aims to use the world's leading single-cell sequencing technology platform to develop antibody drugs for the treatment of infectious diseases and cancers. Xie Xiaoliang, a biophysical chemist and a member of the National Academy of Sciences, founded the company in 2020.

TYK Medicines (Chinese: 同源康医药) raised CNY 330 million in its Series C funding round from Huge Capital, Yangtze River Investment, and Silk Road Fund in January. Established in 2017, it is focused on the research and development of new anti-cancer drugs. Wu Yusheng, who conducted post-doctoral research at Caltech and was a member of National Leading Talent, serves as chairman and CEO of the company.

InxMed (Chinese: 应世生物) completed a USD 50 million Series B round of financing in March 2022. SDIC Investment led the round, followed by AIHC, Shanxi Investment, Houxin Investment and Ennovation Ventures. InxMed was established in 2017 and aims to find solutions for oncology drug resistance and tumor metastasis, especially resistance to anti-PD-1. Founder Dr. Wang Zaiqi, chairman and CEO of the company, is a veteran with 20years of clinical development experience.

TCRCure Biopharm (Chinese: 天科雅), a company in the field of immune cell therapy, announced it had received more than CNY 300 million in a Series B funding round led by AstraZeneca CICC Medical Industry Fund and CCB Investment. TCRCure was established in 2016, focusing on the tumor immune cell therapy technology..

Cyanvaccine (Chinese: 思安信生物) completed a Series A funding round worth CNY 300 million in January. Famed biotech investor Lin Dianhai, Sunz Fund, and Guangdong Zhongda Investment were the co-investors. Cyanvaccine was founded in 2019 by Dr. He Biao, tenured professor and Fred C. Davison professor at the University of Georgia. Cyanvaccine has established core technology platforms such as vaccine technology based on parainfluenza virus 5 (PIV5), mumps virus vector technology, gene recombination technology, and preparation technology.