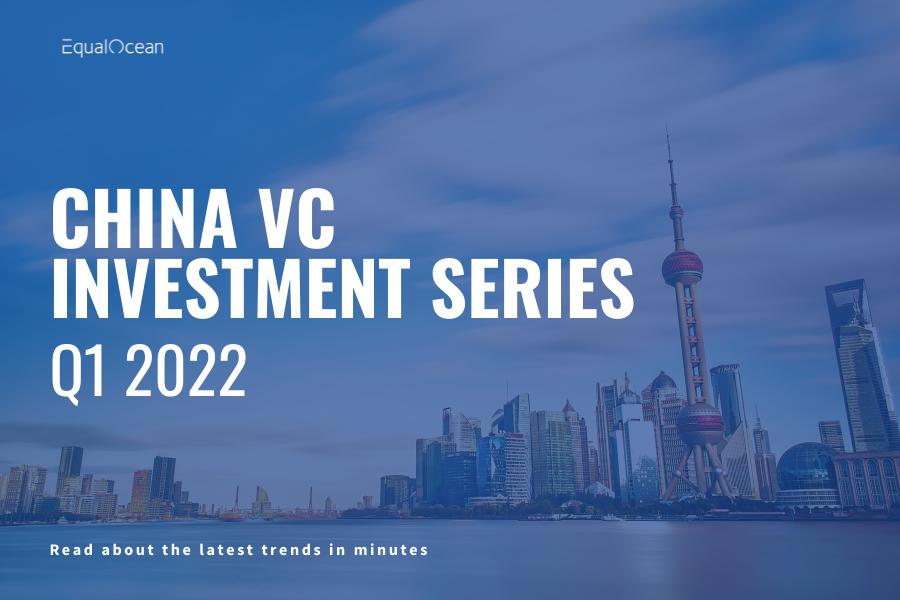 2022 is another banner year for the consumer sector, with coffee, noodle and cosmetics brands setting off a venture capital boom. More and more niche market participants have come under the spotlight, and clean beauty brand Dewy Lab and hand-made lemon tea brand Ningji are but a few examples.

According to incomplete statistics, domestic VC-backed companies raised over CNY 15 billion across 112 deals in the first quarter of 2022, of which over 50% were Series A or earlier stages of fundraising. Beauty retailer Harmay garnered the highest amount of investment of USD 200 million.

For new retail, we at EqualOcean have identified 20 companies worth watching in Q1. The core criterion is to receive venture capital investments of over USD 30 million on average or the equivalent value in CNY in a single round. When compiling the list, we also considered factors such as growth prospects, brand influences and reputation, as well as planned expansions. 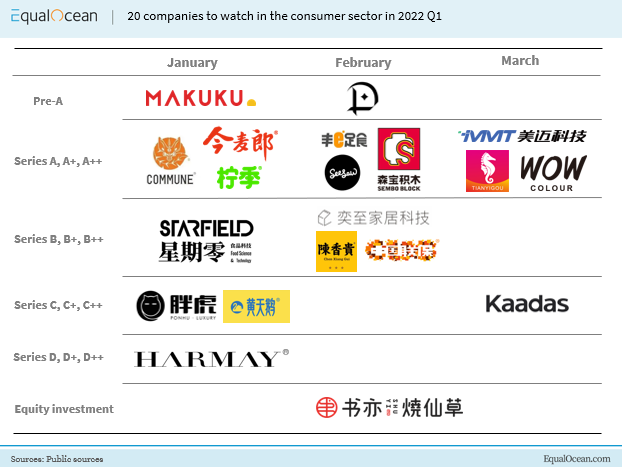 The three-year-old startup Miracle Miles Tech (MMT) closed its Series A funding round for USD 100 million on March 21; IDG Capital and Sequoia Capital China are this round’s investors. Founded in 2019, MMT is a footwear and apparel technology company with five independent brands, of which Dream Pairs was once the top-ranked footwear brand on Amazon.

Chinese plant-based meat company Starfield (Chinese: 星期零) has made history with a USD 100 million Series B investment in January - the country's largest-ever funding round for a vegan protein brand. Primavera Capital Group led this round and was followed by famous investor Zeng Ming; four existing investors also joined this round. Previously, it has received four rounds of financing since Starfield was founded in 2019.

In January, YL Swan (Chinese: 黄天鹅) - a domestic high-end brand of raw eggs - completed its Series C round of financing worth CNY 600 million. This four-year-old startup has set a record for the largest amount of financing for egg brands in the field of basic ingredients to date. According to public sources, YL Swan topped the middle-to-high-end branded egg market nationwide in 2021, with an over 70% penetration rate among consumers.

The storied instant noodle manufacturer Jinmailang (Chinese: 今麦郎) bagged CNY 600 million from consumer sector-focused Harvest Capital on January 28, with the aim to boost its national layout. With 28 years in the market, industry practitioners believe that the company is to start its IPO journey, with the stock broker CSC Financial submitting the first two pre-listing tutoring reports on the firm’s behalf in 2021.

Founded in 2018, the smart home solution provider EZ House Tech (Chinese: 奕至科技) received approximately CNY 200 million from its Series B round of financing in February; Mingdao Investment and Winreal VC led this round. Its smart-home lighting devices brand, EZVALO Technology, has launched on major e-commerce platforms and began its global rollout in 2020.

On January 29, Ponhu Luxury (Chinese: 胖虎) scored USD 45 million in a Series C funding round from INCE Capital, JHF Investment and Hedgestone Capital to further improve its supply chain and data analytical techniques. Founded in 2015, Ponhu is the first domestic e-commerce and service platform for idle luxury goods operating in the C2B2C model. This one-stop platform provides consumers with various professional services such as appraisal, maintenance, recovery and recycling.

The mother-infant household products new retail platform MAKUKU (Chinese: 麦酷酷) raised USD 30 million in the pre-Series A funding round, led by ATM Capital and EDA Capital, with participation from Ausnutria Dairy, Taihe Capital and other investors. This round of financing was mainly used for its development in Southeast Asian markets as well as digital construction. Founded in 2020, MAKUKU is a direct-to-consumer (DTC) e-commerce platform with membership at its core.

With IDG Capital and three other investors backing it, WOW COLOUR received hundreds of millions of yuan in Series A+ round in March; Tencent and Hillhouse Capital Group were its angel investors. The Guangzhou-headquartered one-stop beauty and personal care retailer started its business in 2019. It opened 600 bricks-and-mortar stores domestically with over 300 renowned brands within six months of its inception, and the company is also stepping up efforts in its global business layout.

On February 28, the local boutique specialty coffee brand Seesaw Coffee completed its Series A++ round of financing, bagging hundreds of millions of yuan from BA Capital and CoStone Capital. Starting in Shanghai in 2012, Seesaw is the first coffee brand that HeyTea invested in. Its management team is relatively diversified, including both senior practitioners from top catering platforms as well as post-90s young talent.

China’s first clean beauty brand Dewy Lab (Chinese: 淂意) completed a pre-Series A funding round of tens of millions of dollars in February, led by China Growth Capital, RED or Xiaohongshu, China’s top lifestyle and e-commerce platform, also took part. It is incorporated by a group of top scientists, which aims to use clean formulations and minimize the harm caused to people and the planet.

The Lanzhou beef noodles brand Chen Xiang Gui (Chinese: 陈香贵) closed its Series B financing round worth hundreds of millions of yuan on February 15, led by Loyal Valley Capital. Previously, the company has disclosed three rounds of financing. At present, it owns 74 stores and another 104 stores ready to be put into operation.

The hand-made lemon tea brand Ningji (Chinese: 柠季) started its business in 2021, and five months later, it secured tens of millions of yuan from ByteDance and Shunwei Capital. On January 21, the company received its Series A+ funding from ByteDance again, with Tencent being a new investor. As of press time, it owned over 400 stores across China.

The after-sales services platform cug2313.com (Chinese: 中国联保) completed over USD 10 million worth of Series B financing in February, which was exclusively backed by US-listed E-Home Household Service Holdings (EJH:NASDAQ). Founded in 2012, cug2313.com is one of the first integrated platforms targeting for home appliances in China. To date, the platform has served over 100 million customers in total, with Siemens, Panasonic, Vatti, Xiaomi and other tier-1 brands all being its long-term partners.

The six-year-old restaurant and bar chain completed its Series A+ funding round for an undisclosed amount in January, led by Dayone Capital and with participation from Hillhouse Capital Group and catering sector-focused investor Fanqie Capital. It is positioned as a dining bar for Generation Z and new middle-class consumers with longer business hours, and it owns about 100 outlets across China and 3 million members now.

The e-commerce platform Tianyigou (Chinese: 天异购) received several hundreds millions yuan worth of Series A financing on March 14, with Sequoia Seed Fund, Shunwei Capital and Oriza as its backers. Launched in 2020, Tianyigou has attracted over 100 million users in a year, and it plans to march into the cross-border e-commerce sector, logistics industry and community group buying business.