The two companies once vowed not to make cars but now have set themselves on a path to… nowhere, as they have seen little in the way of profits in their quest to pursue carmaking ambitions 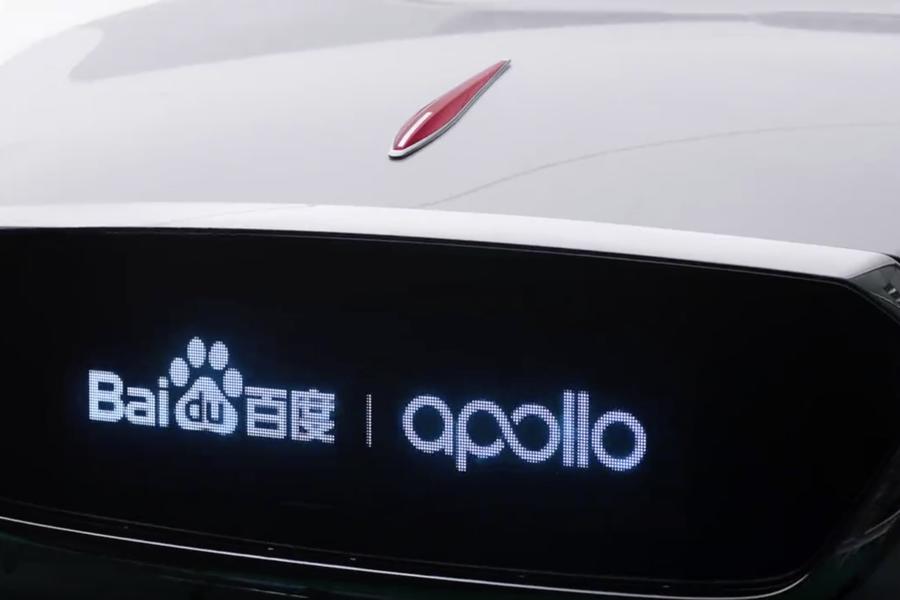 The origins of a car-making endeavor

At the end of 2021, a source claimed staff and assets at Baidu's Intelligent Driving Group (IDG) have been committed to the care of one of  Baidu’s wholly-owned subsidiaries. In addition, after the transfer is over in the first quarter of 2022, IDG is expected to set and achieve annual revenue targets.

In addition, Baidu adjusted the structure and management of IDG. In September 2021, Chu Ruisong, vice president of Baidu B2B SaaS business, was reassigned to IDG to head its intelligent vehicle business division as general manager

Although Baidu's efforts in autonomous driving are well-known, it hasn't seen significant progress in recent years. This article spotlights Baidu's auto business, traces its history and analyzes two problems that are putting a chokehold on its development. We believe Baidu needs to reconsider  the auto business and what it means for its business empire. Developing self-driving will be highly challenging for the tech giant in the next decade, making the company either a disrupter or a target to be disrupted.

Baidu's ambition to branch into the auto sector started with the unmanned vehicle project that was inaugurated in 2013. The core technology is Baidu Auto Brain (Chinese: ''百度汽车大脑"), which includes a high-precision map, positioning, perception, and intelligent decision-making and control.

At the time, the project got off to a low-profile start, and it wasn't until 2015 that Baidu began to speak out about a string of milestones achieved under the project. Below we use a timeline to chronicle major events that occurred between 2015 and 2017:

-On January 27, Baidu launched CarLife, a vehicle Internet of Things solution, with partners including Audi, Hyundai, GM, Mercedes-Benz and Cadillac.

-In March, Robin Li, CEO of Baidu, revealed that the company's first self-driving car would be launched that year.

-On June 8, Wang Jin, senior vice president of Baidu, said at the China Cloud Computing Conference that Baidu would not build its own car but cooperate with third-party manufacturers.

-On December 10, Baidu announced the road test of its self-driving vehicle.

-In 2016, the company obtained a license for self-driving road testing in California.

-On March 1, 2017, Baidu announced through an internal email that it would integrate its existing businesses and resources and set up an intelligent driving business group.

-In the same year, Baidu unveiled its open-source autonomous driving platform Apollo, and it has been iterated ten times to date. Based on this platform, Baidu began to deploy a robotaxi fleet in 2018. Since then, it has gradually expanded its fleet, with more than 100 vehicles deployed in four cities nationwide by far.

-In March 2021, Baidu and Geely jointly established Jidu Automobile, with Baidu holding a 55% stake and Geely 45%.

The IDG division has undergone several changes in recent years and comprises intelligent vehicles, autonomous driving and intelligent transportation business units. The products are divided into four categories: Intelligent cockpit, intelligent driving, intelligent map and intelligent cloud, which operates systems such as Xiaodu In-Car OS. Xiaodu was mostly pre-installed in new vehicles in 2020 in China, which supports speech recognition, driver detection and information security defense. And Baidu map, the market-leading web mapping application, offers positioning accuracy down to the centimeter level, as well as hardware products such as AR-HUD and electronic rearview mirrors. 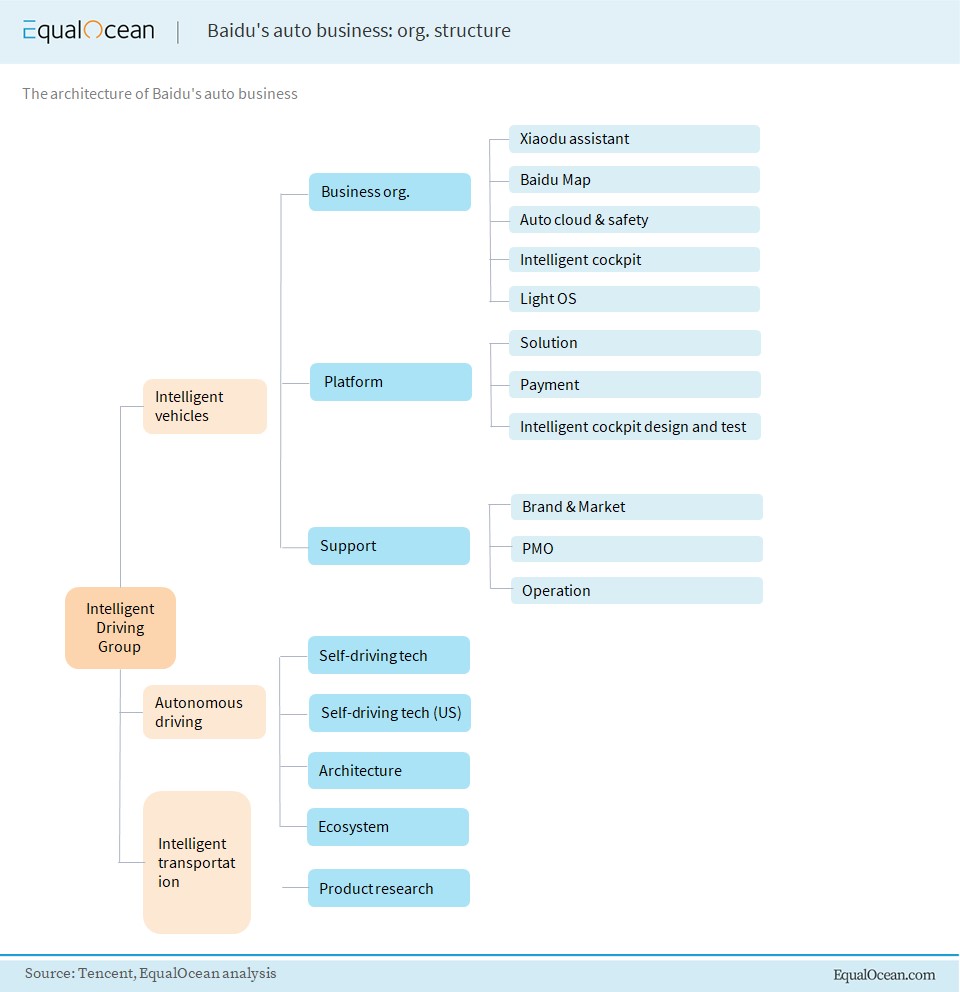 Meanwhile, the company’s autonomous driving business is fixated on Apollo, which is currently the most developed, complete and safest open-source platform for developers. According to its roadmap, autonomous valet parking is the first step toward achieving autonomous urban driving reliant on Apollo Computing Unit (ACU). This module is being used and tested in partnership with Weltmeister, an electric carmaker. At the same time, Baidu launched Apollo Navigation Pilot (ANP) based on pure vision recognition, a feature that assists in high-speed road and urban area navigation.

The ultimate goal of Baidu's self-driving project is to supply Level 4 autonomous driving solutions that enable unmanned buses and commercial vehicles to serve passengers. The company has many partnerships in this field.

Apollo GO is Baidu's robotaxi brand, which has obtained the most autonomous driving licenses in China. It already covers Changsha, Cangzhou, Beijing and Guangzhou and conducts road tests without the need for regulatory oversight. The commercialization of the project has begun. According to recent company statements, it’s clear that Baidu pinned high hopes on robotaxi and has adjusted the management team accordingly. In May 2021, Wei Dong, former CEO of Shouqi Yueche, a leading ride-hailing company in China, joined Baidu as vice president and chief safety operation officer of Baidu Intelligent Driving Group. His mission is to map out the route of commercialization for Apollo GO.

Tech giants with feet of clay?

Although Baidu has a comprehensive business plan for the auto sector, it faces two major problems:

Apollo lacks real training data. The development of autonomous driving technology has met a bottleneck. There are many “corner cases” but a lack of related data to train the algorithms. This issue has hobbled the players that went before. Baidu is no exception.. Baidu's partner FAW Group and Weltmeister Motor are not the leading players in the era of intelligent cars, so they can't provide enough data for Baidu. The company has lagged behind contenders like Tesla, Nio and Xpeng, which collected massive actual data.

Baidu has set up Jidu to build its cars and get more data to address this problem. But Jidu won't be able to produce cars until 2023.

On the other side of the ledger, Baidu hasn’t generated any revenue from the self-driving business. Robin Li admitted that he spent USD 20 billion on autonomous driving in 2021. Astonishingly, this is just the start of perhaps a long-run investment into seemingly a “bottomless pit.” Industry practitioners believe that it will take nearly a decade for current technology and know-how to  mature to L4 or even L5 of self-driving.

Despite the lofty ambitions, Baidu’s efforts  to monetize robotaxi to achieve revenue breakthroughs is still in its infancy. According to Wang Yunpeng, general manager of Baidu's autonomous driving department, if a robotaxi costs CNY 500,000 to build and can be operated for five years, the monthly cost is about CNY 8,000, which is already on par with the rates of ride-hailing services. Assuming the average monthly revenue is CNY 20,000, the break-even point will come in two and a half years, and the profit will amount to CNY 700,000 over a five-year period. Furthermore, due to the reduction of lidar and other hardware costs, the seventh- or even eighth-generation model of robotaxi can cost as much as or even lower than a regular car. However, although we continue to witness cost cuts, the profit outlook is still quite uncertain.

Baidu has a rich portfolio of intelligent driving technology and applications, but even so, few of its business lines are generating any revenue. Like Huawei, Baidu chooses to burn cash to acquire data through self-builtcars after a few failed attempts. The company needs to weigh the following two options: Keep making long-term investment for no profit and rethink the meaning and value of its autonomous driving aspirations. Developing self-driving technology will be highly challenging – and enormously costly – for Baidu in the next decade, and it’s yet unclear how much more resolve it has before any tangible results can be seen.