China unveiled its AI master plan in 2017, aiming to become a global leader in AI, a market worth trillions of dollars, by 2030 and is rapidly closing the gap with the US in this domain. 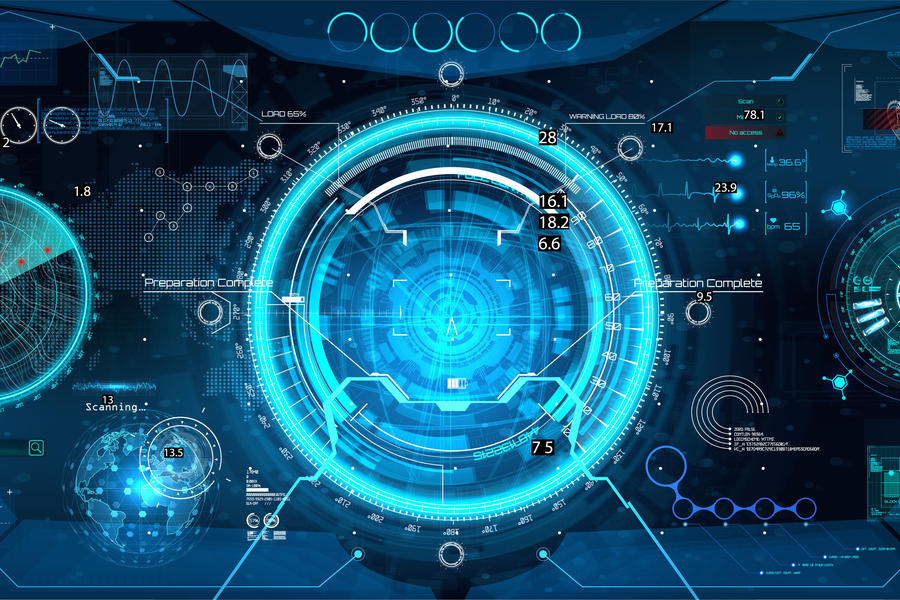 Computer vision software, together with other Artificial Intelligence (AI) technologies, is quite technologically mature and the market is not highly concentrated. As per SenseTime's prospectus filed with Hong Kong Stock Exchange, China's computer vision software market is expected to hit CNY 52.3 billion (USD 8.24 billion) by 2023. Within the past decade, a bunch of China's AI startups have made tremendous progress. Furthermore, some of them grew immensely and eventually turned into unicorns. According to GlobalData, of the 45 international AI unicorns identified, China has the largest share with 19 based in the country. These 19 unicorns are collectively valued at USD 43.5 billion. Among all the computer vision software's applications, surveillance could be the entry point; therefore, this article divides China's AI companies into three categories – Startups, traditional surveillance companies, and tech giants.

This article will mainly focus on China's AI startups.

AI consists of several sub-fields, including machine learning, natural language processing, computer vision, etc. A study by Stanford University in 2021 showed that the number of AI research publications grew by 34.5% from 2019 to 2020, compared to a percentage increase of 19.6% from 2018 to 2019. Notably, China has surpassed the US in the number of AI-related papers published in 2020. China possesses several advantages in developing AI technologies. To name but a few, it has ample data to train its AI systems. With fewer obstacles in data collection and insufficient regulations on data use, China is accumulating massive databases that other countries cannot replicate.

The Chinese government has invested a massive amount of capital and rolled out favorable policiesto attract both foreign and domestic private funds to bolster its AI development. Part of what it does to achieve this goal is to heavily invest in R&D. As a result, China filed the most patents for AI in the world, accounting for 74.7% of the world total in 2020 based on the China Artificial Intelligence Development Report 2020. Furthermore, according to their prospectuses, the Chinese “Four AI Dragons” altogether have secured 7000+ patents. 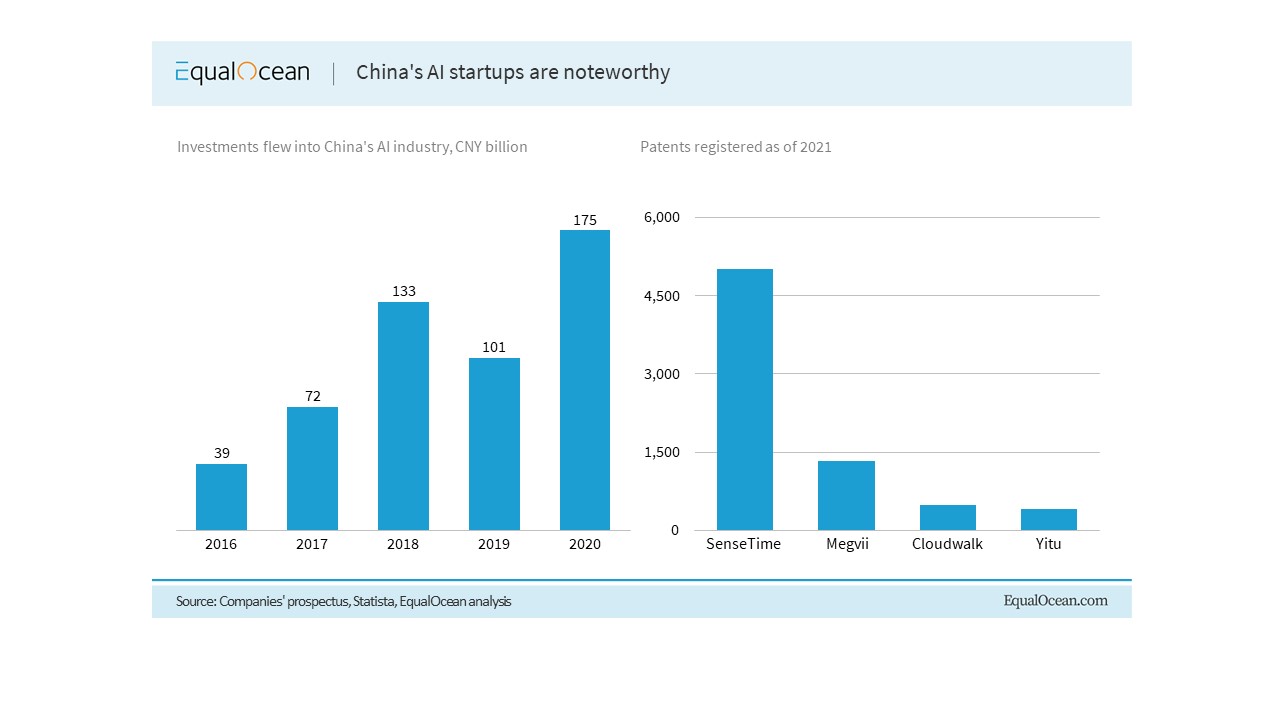 Meanwhile, the computer vision software companies' revenue in China is inseparably linked to government support. Even though it is arguably a big beneficiary of the technological upgrade of China's major cities, SenseTime, the largest AI company by market value, has still posted continued net losses throughout the years so have the three other 'AI Dragons.' 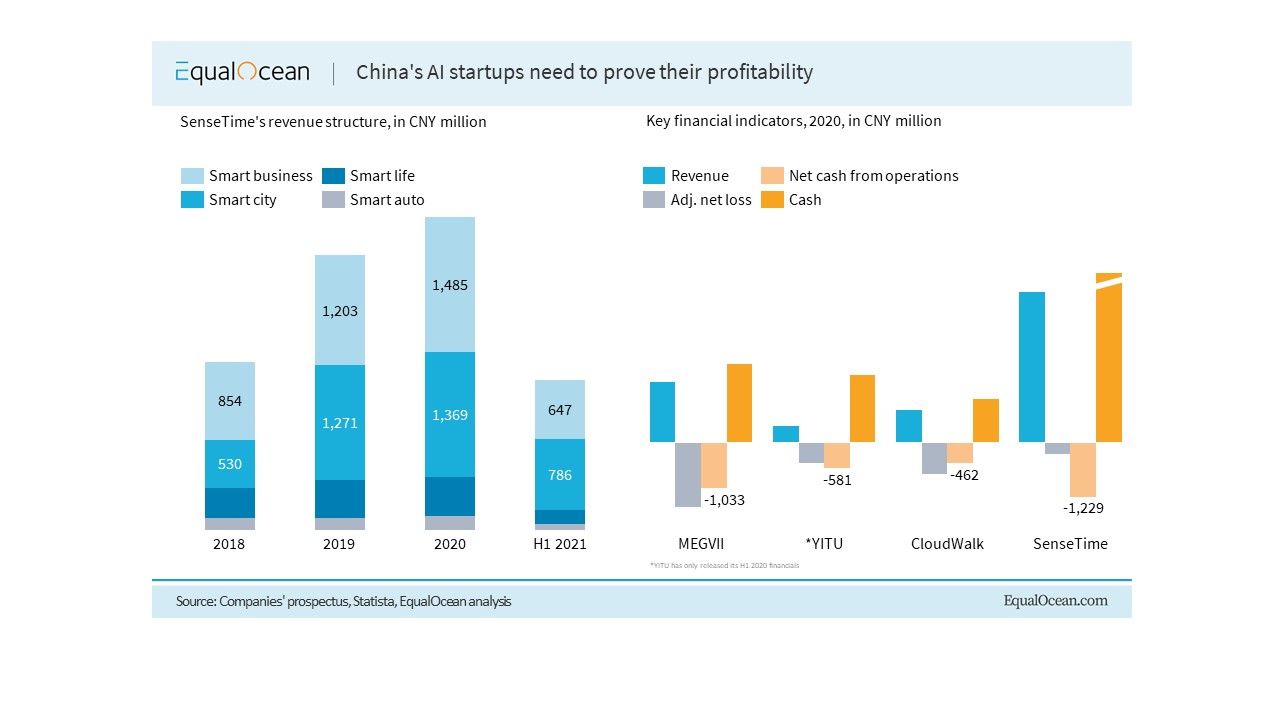 Despite the concern about their profitability, the 'Four Dragons' are backed by a number of prominent venture capital funds and all planned or have plans to go public (SenseTime went public in December 2021). The four companies can expect to become even stronger after they raise more funds from the capital market, helping to alleviate their financial burden. What's more, an IPO means that they can invest significant amounts of money in R&D and market expansion.

Founded in 2014, the company has grown to become Asia's most influential AI company (by revenue in 2020), specializing in image recognition, computer vision, and deep learning technologies. To date, it has served over 2,400 clients, including half of the “Fortune 500” companies. The AI giant raised USD 740 million in its Hong Kong debut. SenseTime markets its universal AI infrastructure to several industries, including Fintech, smart cities, automotive production and robotics. This allows it to develop cross-functional technological expertise. The company's key investors included Softbank China Venture Capital, Qualcomm Ventures, Temasek Holdings, and many others.

Founded in 2011, Megvii is a facial recognition software developer providing a series of full-stack IoT solutions, integrated algorithms, hardware, and software. The company initiated a solution for the automotive sector in 2018, utilizing visual technologies to recognize owners and vehicles, make customized settings, monitor driver behaviors for safety. Backed by investors such as Ant Group, Foxconn Technology Group, and Boyu Capital, Megvii has a valuation of USD 4 billion with a total funding amount of USD 1.4 billion. It has also filed for an IPO on the Shanghai Stock Exchange's STAR market and obtained approval.

Founded in 2013, Yitu Technology builds an ecosystem combining AI chips and AI algorithm software designed for applications such as smart cities, smart Fintech, smart retail, and smart healthcare. It is valued at USD 2.2 billion with a total funding amount of USD 400 million. Investors like Sequoia Capital, Hillhouse Capital, and Gaorong Capital are among the company’s chief investors. Yitu Technology was left with the choice of listing on the Hong Kong Stock Exchange after its application was rejected by the Shanghai bourse.

Incubated as a startup under the Chinese Academy of Sciences in 2015, Cloudwalk offers facial recognition software to state-owned enterprises, banks, airports, train stations and other public facilities for security purposes. The company has become the largest supplier of AI solutions for the financial industry, with a market share of 82.8% in AI-powered banking services in January 2020.  It is valued at USD 3.3 billion with a total funding amount of USD 500 million. Its key investors include Shunwei Capital, Industrial and Commercial Bank of China, Plug and Play, and Atlas Capital Group. The company has already got the green light for its Shanghai IPO.

Amid the Sino-American standoff, all companies mentioned above were put on the Entity List issued by the US Department of Commerce for allegedly having ties with China's military or using their technologies to assist surveillance on domestic citizens.  This move prevents Americans from directly investing in these companies and also curtails their access to US suppliers and technologies.  Such US sanctions could further propel China to rely more on R&D and self-sourced financing.

The crux of the problem for China's AI unicorns, however, lies more with themselves than with US blacklisting or other forms of restrictions. Despite some of them attaining high-profile technological prowess, many face the longstanding issue of how to grow their profits and achieve sustainable growth. Apart from smart cities, smart banking or other sectors, they need to explore a wider spectrum of areas in search of new growth opportunities and compelling stories to peddle to increasingly weary investors.

CONTACT US
Scan QR code to contact us for professional consulting services
Next article
Ecommerce Under Web3: What Will Change?