Demise of Ant-backed Xianghubao: End of 'Golden Age' for Mutual Aid in China? 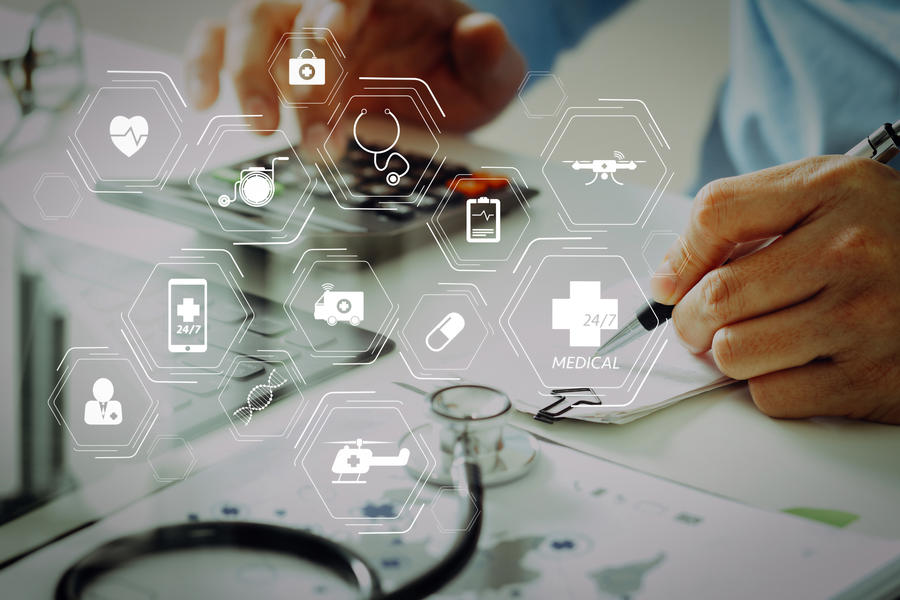 Ant Group, Alibaba's fintech arm, announced on December 28, 2021 that it will shut down its online mutual aid platform Xianghubao (Chinese: 相互宝). This decision followed the closure of similar services earlier last year by peers including Waterdrop, Meituan, Xiaomi and Baidu Inc. Xianghubao, meaning mutual protection, has been another victim of China's ongoing crackdown on the fintech industry.

A decade of ups and downs

Long before the emergence of Xianghubao, Kang'ai Community (Chinese: 康爱社区) was widely recognized as China's first online mutual aid platform. Founded in 2011, the community initially focused on supporting cancer patients who were in need of help. Later, as its operation steadily matured in the following years, it expanded its coverage to other diseases. Along with Quarkers.com, e-Huzhu and Bihubao, Kang'ai Community became one of the first batch of mutual aid platforms, known together as the "Old Four."

The platform was built around the key principle of "everyone for each other." Zhang Mading, the architect of Kang'ai Community, said he developed the idea to found this mutual support system partly due to his own experience. A failed entrepreneur, he was penniless and unable to afford the treatment of his terminally ill mother around 2008, who was stricken with cancer and later died for want of proper medical attention. Traumatized, he believed families of modest means in China could watch out for each other in times of need instead of relying on the public healthcare system or insurance, which at that moment was still in its infancy.

According to the original arrangement, people who applied to join the community would be asked to make small-sum donations every once in a while. The money would then be pooled to help cover exorbitant medical expenses faced by patients and their families unable to foot the bill themselves. In turn, donors were entitled to receive help when they themselves became sick with severe diseases and fell on hard times. This model quickly gained traction in China where remunerations by public healthcare funds are relatively low. This often leaves impoverished patients high and dry and forces them to seek help from others.

Several tech giants -- including Baidu, Tencent, Didi, and Meituan -- jostled for a piece of the pie in the following years, intensifying competition in the online mutual aid market. These platforms began attracting large numbers of members as a result of their significant traffic and distinct ecosystems within a short period of time. By allowing participants to pay a relatively small amount of money, such platforms serve as a tool for easing the burden of medical costs, and they also help educate millions of users about the benefits of insurance. And from this perspective, they all did a good job.

However, as time went on, more and more players began to confront the issue of weaker growth. Amid the ongoing regulatory headwinds that started in 2021, several mutual aid platforms ceased operation successively. Tencent-backed Waterdrop Inc, one of the most established players, shut down this service in March 2021, with 12.4 million members as of the day it went defunct. Meanwhile, Chinese food delivery giant Meituan (3690:HK) closed its mutual aid business in January of the same year.

Xianghubao remains strong even in these challenging times, giving users the impression that it will last for a long time -- an illusion, of course. 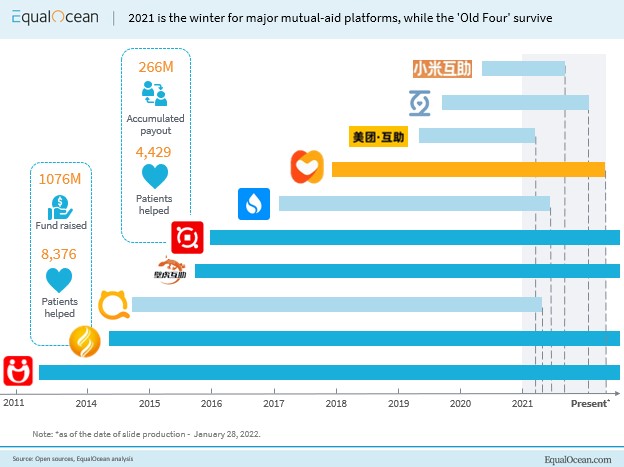 In October 2018,  Ant Group launched Xianghubao under its all-in-one, omnipotent payment app Alipay It attracted over 10 million users within nine days of its launch, and the number of users exceeded 50 million after six months.

With the support of Alibaba, the cost of user acquisition is much lower than that of traditional insurance companies. A year after its inception, Xianghubao accumulated more than 100 million registered users -- 10 times bigger than London's population. This growth pace far outstripped its peers, leaving  even mutual support veterans like Waterdrop struggling to keep up.

At its heyday, Xianghubaowas the world's largest mutual aid community, providing aid to 186,961 patients over the past three years with a total of CNY 27.084 billion (USD 4.265 billion) raised. As of the end of 2021, the number of participants amounted to 74.95 million, shrinking by 40% compared to its peak levels. 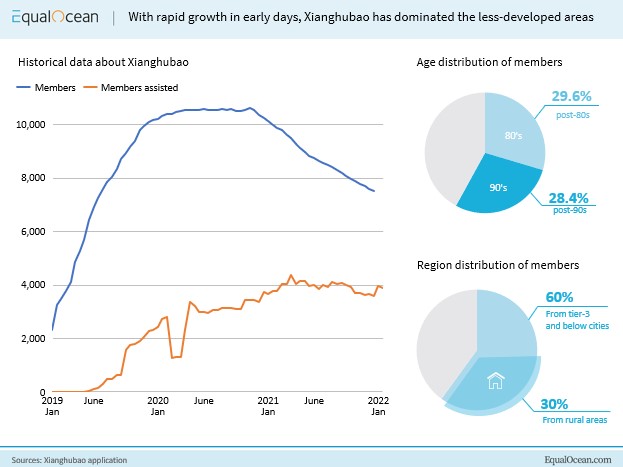 The key reason for its success is its astute understanding and exploitation of psychology. People tend to take advantage of Xianghubao and other mutual aid programs for the best possible coverage, especially since it only entails a relatively small amount of contribution per month. Their emergence caters to people's desire to fend for themselves and their families with limited expenses.

Check out our previous article about Xianghubao:

Tides began to turn and not necessarily in favor of the likes of Xianghubao. China Banking and Insurance Regulatory Commission (CBIRC) , the industry watchdog, has stated that it will oversee and license all online financial activities starting in 2020. Worse still, it defined such platforms as "illegal," thereby restricting the development of relevant businesses to a greater extent. Additionally, Xianghubao has also been repeatedly criticized by users for difficulties in settling claims and refusal to settle claims. This has to do with its low threshold and free membership, which severely crippled the platform's ability to deliver when its services were critically needed. In other words, the demise of Xianghubao, and similar platforms for that matter, is predictable. The shifting regulatory landscape is just the last straw, hastening their decline.

Although Xianghubao was problematic, it did offer a layer of protection for many people, especially in less economically developed rural markets, and it was popular with those who lacked sufficient knowledge of insurance.

Moreover, Xianghubao has seen significant growth as part of Ant Group's insurance business portfolio. According to the latter's prospectus before its mega IPO was halted, Xianghubao increased consumer awareness and willingness to purchase health insurance products, as well as boosted demand for insurance services. Many of Xianghubao's members also purchased the "Good Health Insurance" product. In the first half of 2020, revenue from the InsurTech platform increased by 47.26% year on year to USD 6,104 million, with the surge driven by growth in premiums facilitated by Xianghubao.

The end of the online mutual aid industry is lamentable for sure; they did serve many long-tail clients in a way that alleviated their plight. However, as alternatives become more accessible and better still, affordable -- with the government-sponsored Huiminbao (Chinese: 惠民保), or "Benefit the People" health insurance being the best example -- it's time for this once-thriving solution to bow out.