Beijing is fostering its 'little giants.' 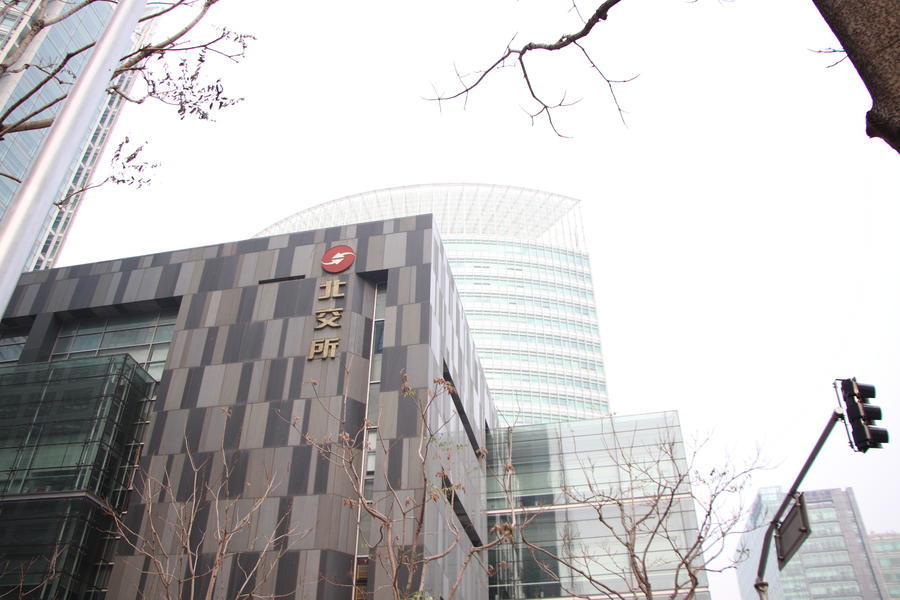 China's commitment to the financial opening-up could be dated back to April 2018 (link in Chinese), and since then, the China Banking and Insurance Regulatory Commission (CBIRC), the China Securities Regulatory Commission (CSRC) along with the central bank have jointly announced over 50 measures to support further progress. In July 2021 (link in Chinese), the Chinese government again emphasized that it will step up efforts to open its financial sector and optimize market access thresholds for foreign banks and insurance firms, with the aim of luring in more foreign investment and revving up the economy.

Meanwhile, in terms of the capital market, China also did its bit. From the debut of Shenzhen's ChiNext market on October 23, 2009, to the introduction of Shanghai's STAR Market on November 5, 2018, China has continued to leverage its capability to serve enterprises in science and technology innovation that are in line with the national strategy and other frontiers in the global economy. The official launch of the new Beijing Stock Exchange (BSE) goes a bit farther to fund those innovative startups.

We here provide everything you need to know about the Beijing Stock Exchange.

Main rules of the game

The Beijing Stock Exchange (BSE) is set up on the basis of the National Equities Exchange and Quotation System (NEEQ, also known as the New Third Board), which submits eligible 'select tier' companies of the NEEQ to the BSE for listing. Currently, there are three levels of trading on NEEQ, namely the select tier, innovation tier and basic tier.

The BSE adopts the registration-based initial public offering system, in line with the high-tech-focused STAR Market and the ChiNext. The review time has been reduced to 2 months, one month shorter than the ChiNext and STAR.

Shares on the BSE also enjoy more price flexibility with no up-down limits on the first trading day, although the price stabilization mechanism – a 10-minute temporary trading suspension – would be triggered when the intraday transaction price rises or drops by 30% or 60% compared with the opening price for the first time. Stock prices could rise or fall by up to 30% after the debut day, compared with the 20% cap on STAR and ChiNext markets – it also means higher trading risks.

The basic requirements for companies to list on the BSE include:

- Listing on the NEEQ Innovation Board for a minimum of 12 consecutive months.

- A minimum public offering of 1 million shares to unspecified qualified investors with an issue target of 100 people.

- A total share capital of minimum CNY 30 million after listing with a minimum of CNY 50 million in net assets at the end of the most recent year.

In addition, companies must meet at least one of the below requirements:

- An estimated market valuation of CNY 1.5 billion and a total R&D investment of at least CNY 50 million in the past two years.

The mandatory delisting is deliberated by the Listing Committee to ensure the seriousness and prudence of delisting decisions, where the delisting risk warning acts as its precursor system.

Four key conditions for mandatory delisting are as follows:

If one of the following circumstances occurs for 60 consecutive trading days:

- The stock's daily closing price is below the par value per share.

- The number of shareholders is less than 200.

- The market value of the shares traded by the company listed in accordance with Article 2.1.3 of the Listing Rules of the BSE is less than CNY 300 million.

If one of the following circumstances occurs:

- The net profit for the most recent fiscal year is negative and the operating revenue is less than CNY 50 million.

- The audited closing net assets of the most recent fiscal year were negative.

- The audited financial accounting report for the most recent fiscal year was issued with a disclaimer of opinion or adverse opinion.

If one of the following circumstances occurs:

- The annual or interim report is not disclosed within the statutory deadline and remains undisclosed for 2 months after the suspension of trading of the company's shares.

- Over half of the directors are unable to guarantee the truthfulness, accuracy and completeness of the annual or interim reports disclosed. The company failed to rectify the situation within the statutory period and remains uncorrected for 2 months after the suspension of trading of the company's shares.

- Material accounting errors or false entries in the financial and accounting reports. The company failed to rectify the situation within the statutory period and remains uncorrected for 2 months after the suspension of trading of the company's shares.

- Material deficiencies in information disclosure or regulation of operations. The company failed to rectify the situation within the statutory period and remains uncorrected for 2 months after the suspension of trading of the company's shares.

- The total share capital of the company or the proportion of shares held by public shareholders has changed, resulting in a disqualification for listing in 60 consecutive trading days and remains uncorrected for 1 month after the suspension of trading of the company's shares.

- The company may be forced to dissolve by law.

- Application for reorganization, reconciliation, or bankruptcy liquidation according to law.

Including violations of national or public security, and false records, misleading statements, or material omissions in application or issuance documentation, and other circumstances.

The eligibility requirements for investors to participate in trading in the Beijing Stock Exchange are in line with ChiNext and STAR rules.

For individual investors, the participation requirements are 1) having a daily minimum of CNY 500,000 in assets in their securities and capital account for the duration of 20 trading days before the trading authority opens; and 2) having a minimum of 24 months of trading experience.

There are no specific capital thresholds for institutional investors.

The establishment of the BSE complements two other exchanges in the business hub of Shanghai and Shenzhen, where companies listed are generally in their earlier stage with relatively smaller size and innovative focus. It targets 'zhuanjingtexin' (Chinese: 专精特新) SMEs or the 'little giants' engaged in advanced manufacturing and services industries, as well as SMEs with outstanding innovation capabilities in strategic emerging industries, with the aim to offer companies new financing opportunities. In fact, this is also corresponding to the Chinese government's strategy to become innovation leaders.

Some negative requirements for companies to list on the BSE are as follows:

- Enterprises engaged in the financial and real estate industries are not eligible for listing.

- Enterprises categorized in the industry as having excess capacity or the eliminated category specified in the Catalogue for Guiding Industry Restructuring promulgated by the National Development and Reform Commission (NDRC) are not eligible for listing.

- Enterprises engaged in preschool education, subject-based training, etc, are not eligible for listing.

As of the end of 2021, 82 companies landed on the Beijing Stock Exchange. Their total market capitalization has reached CNY 272 billion.

From the perspective of industry distribution, advanced manufacturing, modern service, high-tech manufacturing, high-tech service, and strategic emerging industries accounted for the major part. While in terms of geographical distribution, Jiangsu, Beijing, Guangdong and Shandong have the most listed companies, accounting for over 50% of the total. Most of the listed companies are valued below CNY 5 billion (90.24%) and over half of them are concentrated in the range of CNY 1 billion to CNY 2 billion. 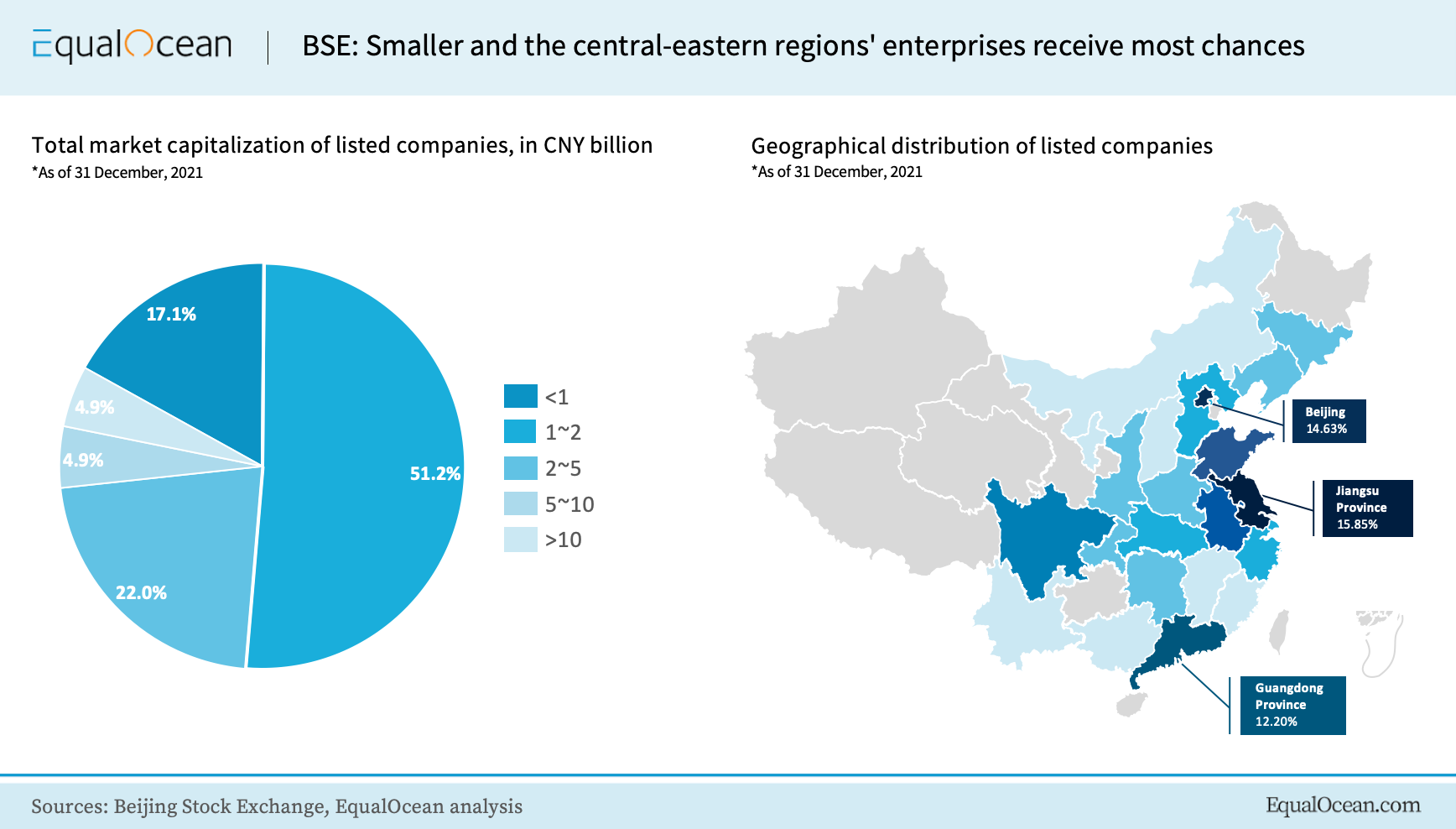 In the first week of 2022, the BSE's trading volume increased by 2.57% to 679.6 million shares, and the amount totaled CNY 9.04 billion. The top 10 stocks in terms of the trading amount are mainly distributed across the manufacturing, pharmaceutical, material and information technology industries; while in terms of the trading volume, the public utilities sector is another major focus in addition to the abovementioned sectors.

On January 6, 2022, BSE welcomed its 83rd listed manufacturing company VIBO (871245:BJ). With the restoration of investors' confidence and the constantly increasing trading activities on all sides, the inclusive listing rules may lead to more listings of eligible SMEs, which will further play a positive role in boosting China's economy along with the STAR Market and ChiNext.