Thanks to progressive decision making at the executive level in China, the nation has established the most prominent foundation of EV automotive business structure and national infrastructure in the world. 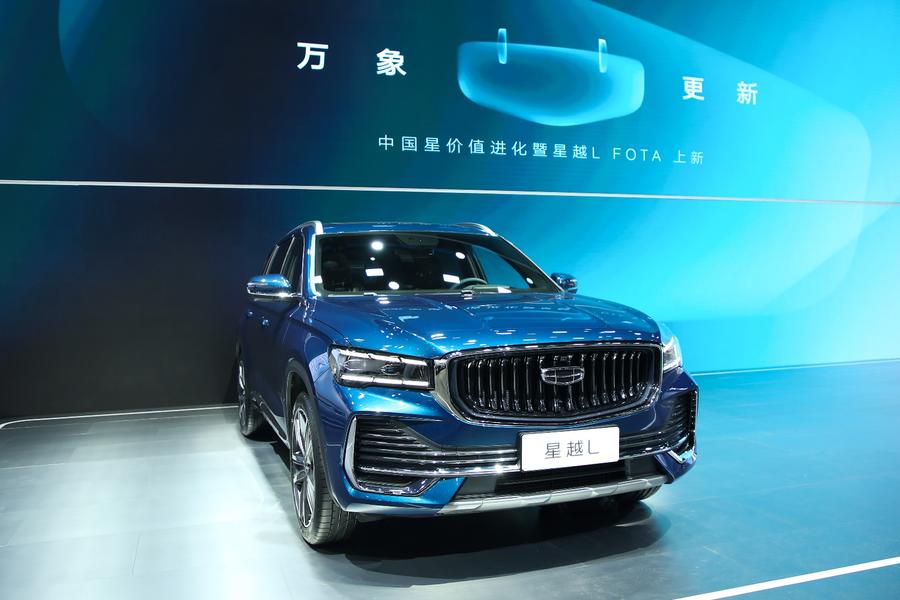 Relative to other nations' infrastructure, China is already exploring the future. China's automotive industry is next to none in terms of advancements – and there’s no signs of slowing. This is due to the forward thinking of China’s leaders of industry who early on coordinated the construction of an extensive supply chain network and customized their economic system in such a way that this infant industry could incubate and take shape. Establishing a presence in not only battery manufacturing but its upstream derivatives in resource mining has helped China enjoy the cost benefits of in-house efficiency. Companies like CATL impactfully support domestic EV firms like Nio, Xpeng, and LiAuto while BYD does both battery manufacturing as well as EV production.

Legacy automakers in the west stubbornly disregarded EVs as unrealistic and hyperfocused on fuel efficiency. China could not previously compete well in the ICE industry globally and so wisely desired a first mover advantage in establishing their own legacy EV market. With a massive independent nation market of its own, China has already spurred plenty of fiscal growth from this soon to boom industry. The most important factors are their strengthened supply chains and state guided demand. For investors, the future success hinges on China's ability to sustain their claim at the top globally and establish renowned brands, maintain a healthy business ecosystem, and innovate to set their machines apart.

China is the front runner globally in the electrification of its national motor vehicle fleet. To date, China has a greater share of EVs in its fleet than any nation and has plenty of room to grow. NEV sales grew 150% in September of 2021 compared to the previous year while EVs increased their overall share of total passenger vehicle sales in China from 13.2% in 2Q21 to 18.6% in 3Q21. To achieve this market share, China utilized extensive government support and fiscal subsidization to initiate the public transition from ICEs to EVs. China seeks to phase out the subsidization program by the end of 2022 since increasing sales momentum for EVs has picked up. After this subsidization ends there could be a decline in EV sales if there still exists a substantial price parity between EVs and ICEs. China's growing economy and rising incomes can still further increase consumer purchasing power and drive up the demand for private car ownership. When assembly and charging costs exponentially begin to deflate for the EV sector, the price decrease will offset and supersede the removal of subsidies such that consumption consequently picks back up.

China specifically has mandated that electric vehicles (EVs) make up 40% of all sales by 2030 for automakers regardless of gross cost. This should give investors a specific outline for sales growth. The infrastructure is in place to accommodate the large nation with around 2 million charging stations already across China. Since the supply constraints are less of an issue in China than anywhere else in the world, Chinese vehicles relative to anyone else should have the advantage with consumers generally. Tesla is a possible exception. But if Chinese consumers embrace a nationalist preferance for domestic firms, they should overall continue to gain market share over Tesla at home and enjoy the rapidly growing demand and popularity.

The ability for Chinese EV manufacturers to export beyond the mainland will depend on the political relations of China with the world, particularly Europe. There is expected pullback due to national security concerns which is why the American market for EVs is almost certainly off the table. Once fleets begin to fully automate, it would be hard to imagine nations trusting potential foriegn adversaries with critical infrastructure like complex centralized transport networks. Though consumers in the west have grown accustomed to Chinese tech products, governments will have the final say on Chinese EV sales in their respective markets and to what extent.

Should these companies be able to substantially break through in Europe, their success will depend upon their ability to compete in legacy automakers' home territory. The vehicles will have to meet the niche demands of European consumers. The urban mini EVs and battery swap technologies could appeal to European city goers. Luxury high performance vehicles will be right up against VW group, Tesla, and others. A study from Bloomberg NEF, reported by The Guardian, suggests that, in Europe, EVs will surpass ICEs in cheapness as early as 2027. Being that China has established supply chain dominance with a head start in the industry, we could expect China as a nation to beat this figure. However, they can only compete with European OEMs if they’re allowed to export there. If they are, there are billions of people ready to try out the next generation of transportation that China is prepared to provide.

The largest determinant for the profitability of Chinese EV manufacturers is the supply side constraints. Demand will naturally rise as the technology, assembly, and supply for EVs will get cheaper overall than ICEs. This is especially certain as China legislatively continues to artificially guide consumer demand in the short term. The change to EVs in the next decade should be exponentially quick following the S curve pattern of innovation. The magnitude of cheapness and quickness depends on 2 crucial vertical components for EV production, batteries and chips. Particularly increasing energy density in batteries drives down production cost. Fewer production steps per KwHour, less material inputs, labor inputs, energy inputs, and lighter weight batteries will all beef up profitability and benefit investors. 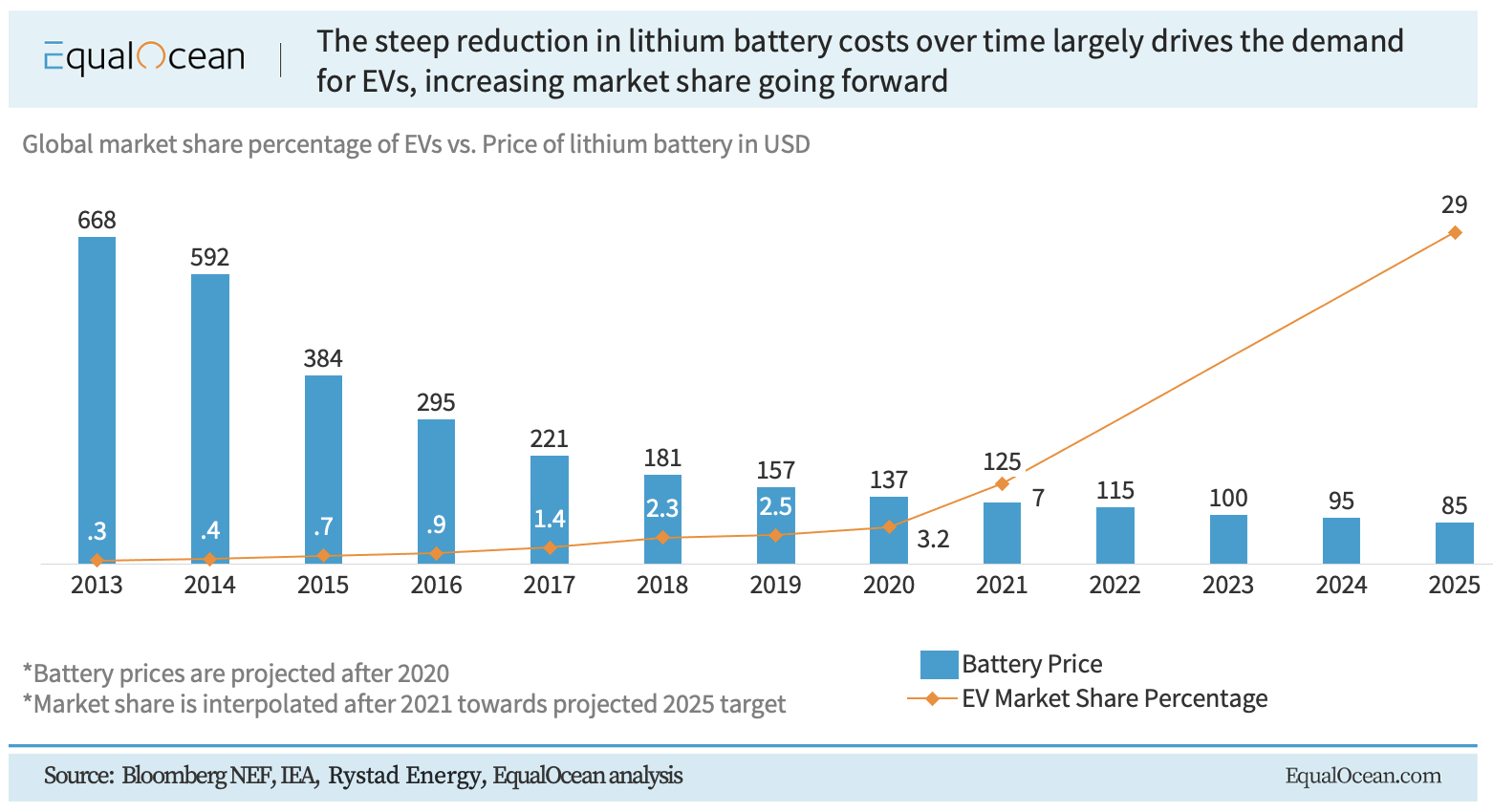 According to CleanTechnica, batteries still make up a third of the costs for EV manufacturers. Luckily, China has the premier global advantage in rare earth mineral mining, particularly those critical to the manufacturing of batteries. According to the IEA, China’s market share of refining is around 35% for nickel and 50-70% for lithium and cobalt. Being a world leader in mineral supply chain components bodes well for Chinese domestic EV firms who will be first in line to access these minerals. Prioritized access will heavily support the margins for China’s EV companies. It is cheaper and easier for Chinese EV companies to order batteries and manufacture than legacy automakers and start-ups scrambling to bid up for battery components.

CATL and BYD are present in the vertical links of the supply chain for batteries crucial to EV production and can capitalize on this advantage. BYD intends to purchase no less than 56,050 tons of lithium hexafluorophosphate products. CATL itself has plenty of share in upstream direct resource mining as well as the assembly of battery cells and packs. While having joint ventures with several other Chinese EV manufacturers, China is on track to strongly outpace the rest of the world. China is projected to scale up towards 140 domestic battery megafactories while the US will only have 10 by 2030, according to CNBC. This once again leaves America and Europe to depend on scaling up their own resource extraction while relying on other nations or China itself. 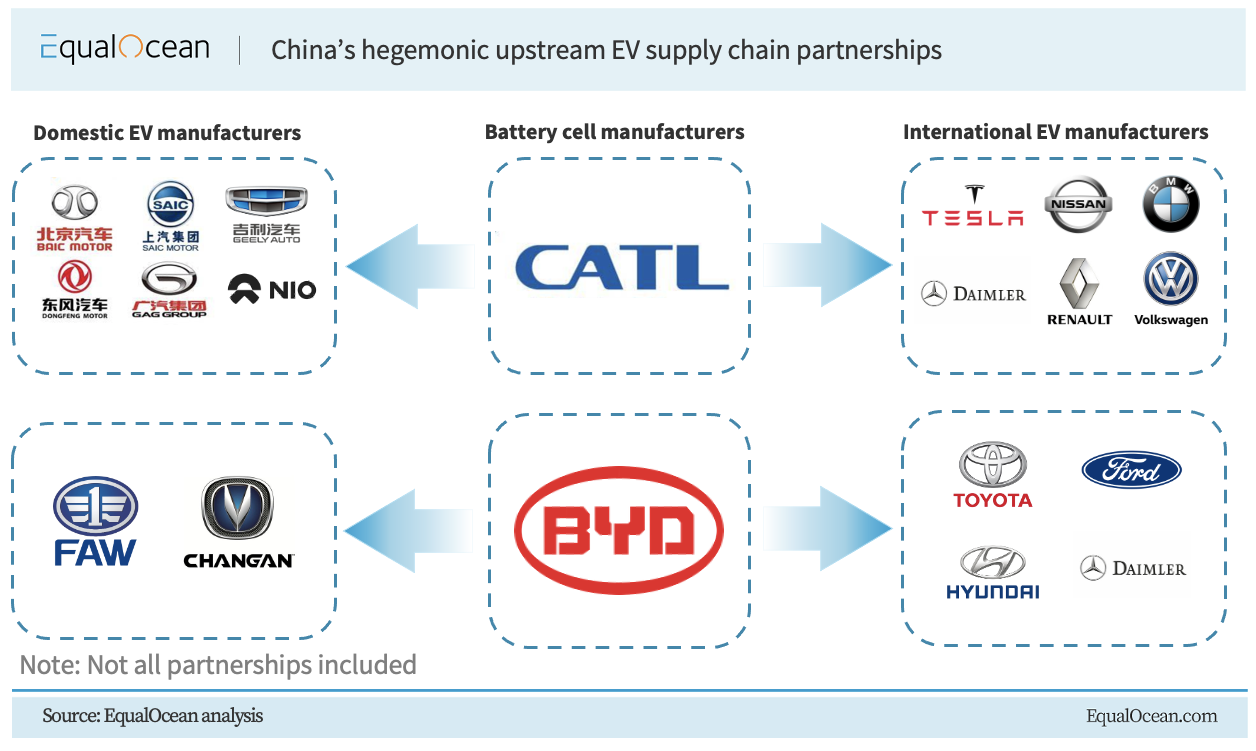 A limit on the health of China’s emerging EV market is extreme market fragmentation. The model of incentivisation for production and investment into EV’s has led to a crowded field including leading firms like BYD, Geely, SAIC, as well as newcomers like Nio, Xpeng, and LiAuto. Even other indirect firms like Huawei, Evergrande, and Xiaomi have entered the market. In early 2019, China was home to a staggering 635 companies making new-energy vehicles, including electric cars. However, only 80 of those have had an actual product to show for their efforts by the end of the year, according to state media Xinhua News Agency. The fragmented market can result in lower margins and expensive logistics for emerging EV firms. The smaller firms also have no advantage of size when dealing with suppliers or buyers.

Beijing is encouraging electric-car makers to merge and restructure in a bid to drive more investments in advanced technology. “Our businesses need to be bigger and stronger,” Minister Xiao Yaqing said at a press conference. It would be bullish for leadership in China to guide consolidation of smaller firms and to assist in market specialization for niche subtypes of EVs automakers in the industry. Even in a worst case scenario of an overall economic slowdown, this should force the closing of many start-up EV firms and consequently trigger a redistribution of those supplies and technology to bigger firms. The subtypes being luxury EVs and high performance EVs, with other firms mass producing more urban, cost efficient and easily adoptable vehicles. There is still space for Tesla and VW to take a chunk of market share; however, it is crucial that China has clear winners who can streamline the production process most efficiently and sustain growth for the next decades to come and prospectively even compete abroad should China's global relations improve.

Autonomy, Innovation, and the Future

Now that EVs are widely being accepted, adopted, and promoted, the next step is how EVs are improved. China’s next step as a nation is the race for technological supremacy with the USA. This will require that China not only develops talent and a highly skilled workforce, but they must also attract intelligence and retain it. EV companies should look to not only compete with foriegn companies but to beat them. This scope obviously goes beyond EVs into space exploration, AI development, smart technology, and the advancement of sophisticated infrastructure. Within the EV space, China will have to perfect its art of production. What will set Chinese EVs apart?

Software, AI, design, and the race to autonomy will be pivotal to investors. At the high end, Xpeng plans to roll out a flying car by 2024 while Nio already has an AI assistant 'Nomi' in some of its models. Consumers of the future will require more than just a pretty price tag. Like Germany’s world renowned 'German Engineering' essence, China will need to establish state of the art, next-gen vehicles with a unique culture.

The most critical innovation in the next couple of decades will be on the batteries. Solid state, Cell-to-Chassis (CTC), and many other new forms of batteries will be a huge cost reduction and performance factor. Developing more efficient unique chemical compositions for EV subtypes will maximize the utility of each vehicle to its targeted consumer base. As previously mentioned, since China has the best environment on the supply side for EVs, the resources are readily available there. The next necessary step is to take advantage and bring brilliant minds to solidify their captains of industry. China has the impetus to achieve not only their carbon neutrality goal by 2060, but other nations' more ambitious targets as well.

Looking at supply and demand factors as a whole, China has an advantage throughout the entirety of the EV market; upstream resource mining for batteries, downstream vehicle manufacturing, and infrastructure to make demand palatable. These advantages coupled with the state led efforts and timely decision making ahead of the world puts investors in China in a great position to capitalize on the growth that is right in front of them.

Companies like Nio, LiAuto, and Xpeng are prepared to give consumers a high end experience of China’s well developed engineering and industry model. The profitability outlook is healthy as China is equipped to continue facilitating this growth and get more citizens into these eco friendly, more affordable, and safer vehicles. Should China even minimally keep pace technologically, the financial ramifications are ideal and promising. Even as a devil's advocate, you must expect that China can benefit in many ways from its pre-established dominance in the industry. We suggest investors capitalize on the blossoming industry while the global transition remains preeminent. China is prepared to catapult forward during the cost inflection point against ICEs. The industry is ripe for support and primed for electric growth.