An Industry Built on Debt

Real estate has long been the stimulus behind China's rapid economic development. House-buying became an investment as prices soared, thus resulting in overbuild. Evergrande's downfall signals the halt on China's reliance on its real estate sector as the country seeks to regulate and strengthen the economy and its foundation. 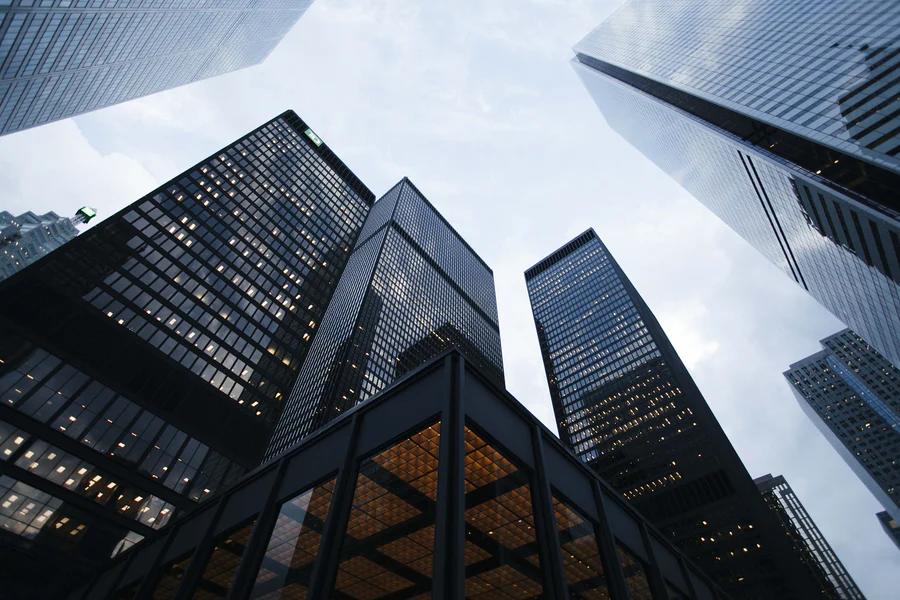 Once the most prolific builder in China, Evergrande Group is now the world's most indebted developer with a pressing USD 300 billion debt. Chinese developers have adopted two strategies to expand their portfolios. One method commonly used by developers is to scale up. As the company scales up through lending, the company becomes 'too big to fail' and eventually gains access to cheaper bank loans. The average cost of borrowing substantially decreases as the company grows bigger through lending. Another strategy that is prevalent among developers in China is the pre-sale. Pre-sale is a common practice in Hong Kong where the property developers sell units to buyers before construction. The method barely encounters any problem in Hong Kong due to the abundant cash flow of property tycoons. On the other hand, China does not fare so well when developers use the same strategy due to capital issues; however, this practice is still abused and eventually results in the many heavily indebted developers that we see today. According to CNN, 90% of properties in China are sold before being completed, meaning that buyers will be directly affected by any setbacks for the builders.

Fujian Fusheng Group Co. is a classic example of an overly leveraged developer in China that failed to deliver on its promises. The luxury builder asked its staff to co-invest in a project through trust products. Fusheng established the 3691 model that promised to break ground on the project in three months, start pre-sale in six months, finish construction in nine months, and generate a 30% return on the money the company had borrowed in just one year. It was no surprise to anyone that Fusheng ended up defaulting and required several other developers for its bailout.

Developers in China have built an excessive amount of housing that there are now empty cities in some areas of China. These cities are called 'ghost cities' and their existence is mainly due to the fact that developers like Evergrande continuously pour more money into real estate development despite fading demand for housing. Historically, cities are built where resources such as water, minerals and oil are in close proximity. China, however, built some of its cities on the basis that if a city is built, people are going to move in. Evergrande's failure draws attention to the fragile conditions of the real estate economy's foundation and shines a light on the ghost cities that could prove to be China's next focus for its real estate growth.

Behind the empty cities

China has accumulated enough empty housing, over 65 million units, for almost the entire population of France. It is interesting that the nation with the largest population of the world should have so many empty housing units. Property development accounts for more than 29% of the national GDP in China, and the ghost cities attest to China's reliance on real estate as an economic growth driver. An economics professor – Li Gan, from Texas A&M University – predicts that the contribution of the real estate industry to the GDP could fall to around 15% after imposing tightening measures and the increasing sense of stress in the industry. The professor also estimates that about 20% of China's housing stock is vacant as buyers look to buy their second and third properties as investments. The Chinese government has been cautious with maintaining the country's economic growth. As a result, developers can rely on their local government for a bailout when they are on the brink of failing. People, seeing so many new constructions every year, think that real estate is the safest investment there is and they buy more housing than they need in the hope of one day selling for a profit. This winded up creating sizeable empty apartment complexes and ghost cities that go uninhabited for years.

A crucial factor contributing to the existence of ghost cities is that these cities are built when there is little demand for a new place to live. Professor William Hurst from Northwestern University said that "Cities and districts built without demand or necessity resulted in what some Chinese scholars have termed, literally, 'walls without markets,' or what we might translate as uncompleted or hollow cities. Political exigency and investment hysteria trumped economic calculus or consideration of genuine human needs". In addition to decreasing demand for new living spaces, businesses do not like the idea of moving into a brand-new city without any residence. Zhang Jingqiang became the new mayor of Tieling, located in the province of Liaoning, in 2005. The mayor envisioned a city that 'no one wants to leave'. The local government moved its offices to the newly built city. During the daytime, the city would see people coming in to work. Come dusk, however, the city almost emptied. Many people bought units of apartment buildings in Tieling, but only a few moved in. These people saw their purchases more as an investment than a home.

Real estate is no longer the main growth driver in China. As the country heavily relied on urbanization for economic stimulus in the past, the price of housing skyrocketed. But urbanization and real estate development have never been sustainable sources of growth, and China recognizes that. Policymakers in China imposed The Three Red Lines in 2020 to help manage the spiraling market:

These policies aim to manage the real estate sector's growth and value, limiting developers' leveraging power and lower cyclicality to achieve long-term mechanisms for real estate. Evergrande's looming default sounds an alarm to all the other developers who will be scrutinized under the newly imposed policies. As companies try to deleverage in compliance with The Three Red Lines, real estate development activities will see a sizable decrease. The Evergrande Group crisis is bound to ripple throughout the entire country and could create a new wave of default as developers like Fantasia missed a USD 206 million payment two weeks ago. 'Ghost cities' should become less of a problem as the false notion of real estate investment shatters. The government has been actively placing businesses and education institutions in empty cities to prompt people to move in. With new regulations stunting the sector's growth, the 'ghost cities' will be gradually filled and fewer real estate projects will be planned and built.

Ordos City, once the largest ghost city in China, relied mainly on its coal and manufacture industry. But as the coal industry and demand dwindled, so did the economy of Ordos. This situation can be improved upon given time and planning. Cities like Ordos have unrealized income potential with vast amount of unoccupied office and residential space. Although Ordos have remained to be one of the largest coal producers in China, sitting close to 210.20 tons of coal reserve, cities need to have more than one major income stream to cope with the market's volatility. Some experts have suggested to shift Ordos from a coal-driven city into a cloud-service city. The empty spaces could provide tech companies with rooms for servers and equipment. It is a matter of finding the appropriate income stream given the geographic, financial, demographic, political, and cultural information of the area. The real estate sector in China has almost come to saturation. As of September 2020, real estate development accounted for roughly 82% of all holdings among four sub-industries. That number is likely to fall to roughly 50% to 55% as the other real estate activities increase. Diversified real estate activities and real estate services will see a boost, along with small increase in the weight of real estate operating companies. Developers are also struggling with maintaining a healthy cash flow, which will be reflected in the real estate development activities in the upcoming years.  However, 'ghost cities' can extend the country's real estate development by providing more jobs in underdeveloped areas. China should see largely diminished growth in real estate as the country to find an alternate source of growth. 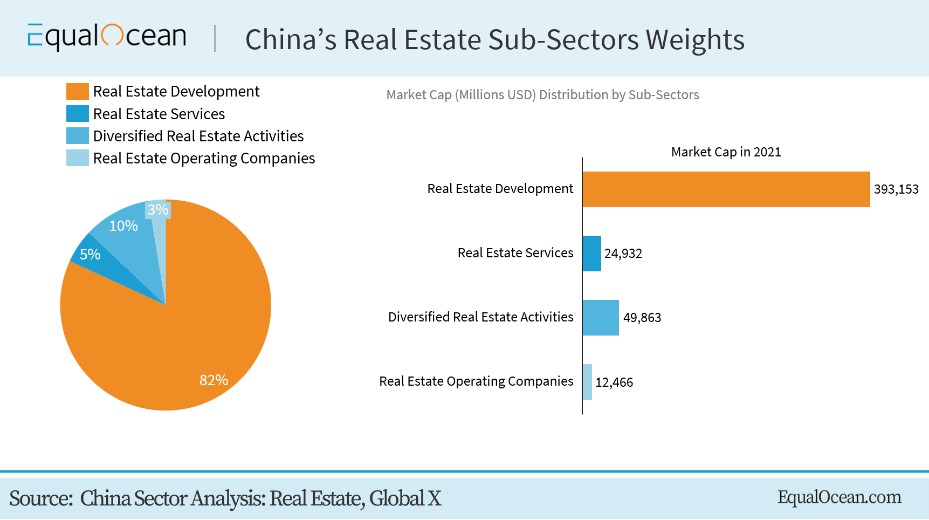 'Ghost cities' provide the perfect testing ground for optimizing real estate policies. Land zoning has been put into place in many countries, including China. But a stricter zoning regulation may help the country. While zoning can facilitate growth, it can also slow down development, compelling the local government and real estate developers to proceed with their business in a more controlled fashion. China's preemptive strike at the Evergrande Group and the entire real estate industry stopped a nationwide crash; however, it also unveiled the delicate foundation behind the industry's rapid growth. As per the MSCI China Real Estate Index, the annual performance had fallen drastically, from a 93% in 2017 to -13% in 2020. The real estate index had outperformed the MSCI China index from 2017 to 2019. The Three Red Lines policy imposed in 2020 led to MSCI Index pulling way ahead of the real estate index for a change. The MSCI China Real Estate Index is likely to remain at that position for the next five years, if not lower, comparing to the MSCI Index. President Xi's mantra of "houses are for living in, not for speculation" will the resounding theme of the real estate industry going forward. Unoccupied cities should be the next focal point as China restructures the industry towards less debt-burdened business operations and strengthen the foundation through completion of unfinished cities and buildings. Developing 'ghost cities' is a reasonable next step for the Chinese government to maintain growth in the real estate sector. As China begins to pilot property tax trials in selected cities, local governments are less likely to rely on leasing land for income, which is a method commonly used that contributed to the creation of several ghost cities. Local government should pursue real estate activities other than development in order to reinforce the foundation of the industry. The regulators have already won the tug of war against the developers that are rapidly expanding their portfolios through leverage. The one thing left to do is to stabilize the housing market and seize the revenue and growth potential of ghost cities.

CONTACT US
Scan QR code to contact us for professional consulting services
Next article
Amid the Digitalization Boom: ZhongAn is Speeding Up