Perhaps many years later, the people of the world will really learn the significance of 2018 in the history of Chinese entrepreneurs. The events like the China-United States Trade War 2018, China's International Import Expo – will become the key events in history. And more importantly, it was this year that the third generation of Chinese entrepreneurs and their private companies became a new source of China's rising innovation.

The sparkle of 2018 catches fire

The wave began with the first China International Import Expo (CIIE). Early in 2017, China's President Xi Jinping announced that China planned to hold CIIE annually from 2018 in Shanghai, which is the world's first import-themed national-level expo, to promote the Chinese products and services to foreign companies. Half a year later, the 2018 World Artificial Intelligence Conference was held in Shanghai, showing China's intention to encourage artificial intelligence and lead innovation and entrepreneurship. At the historic moment when a new round of technological and industrial reforms aimed at high-quality development in China, the United States started to worry about a rising China challenging on the world stage. In January 2018, U.S. former President Donald Trump began setting tariffs barriers on China to limit the rapid development of the red giant, and the range of tariffs has been increasing in the following two years. In December 2018, the animosity got worse – Meng Wanzhou, the CFO of Chinese telecom and electronics company Huawei, was arrested in Canada at the United States' request to handicap Huawei's 5G networks technology. 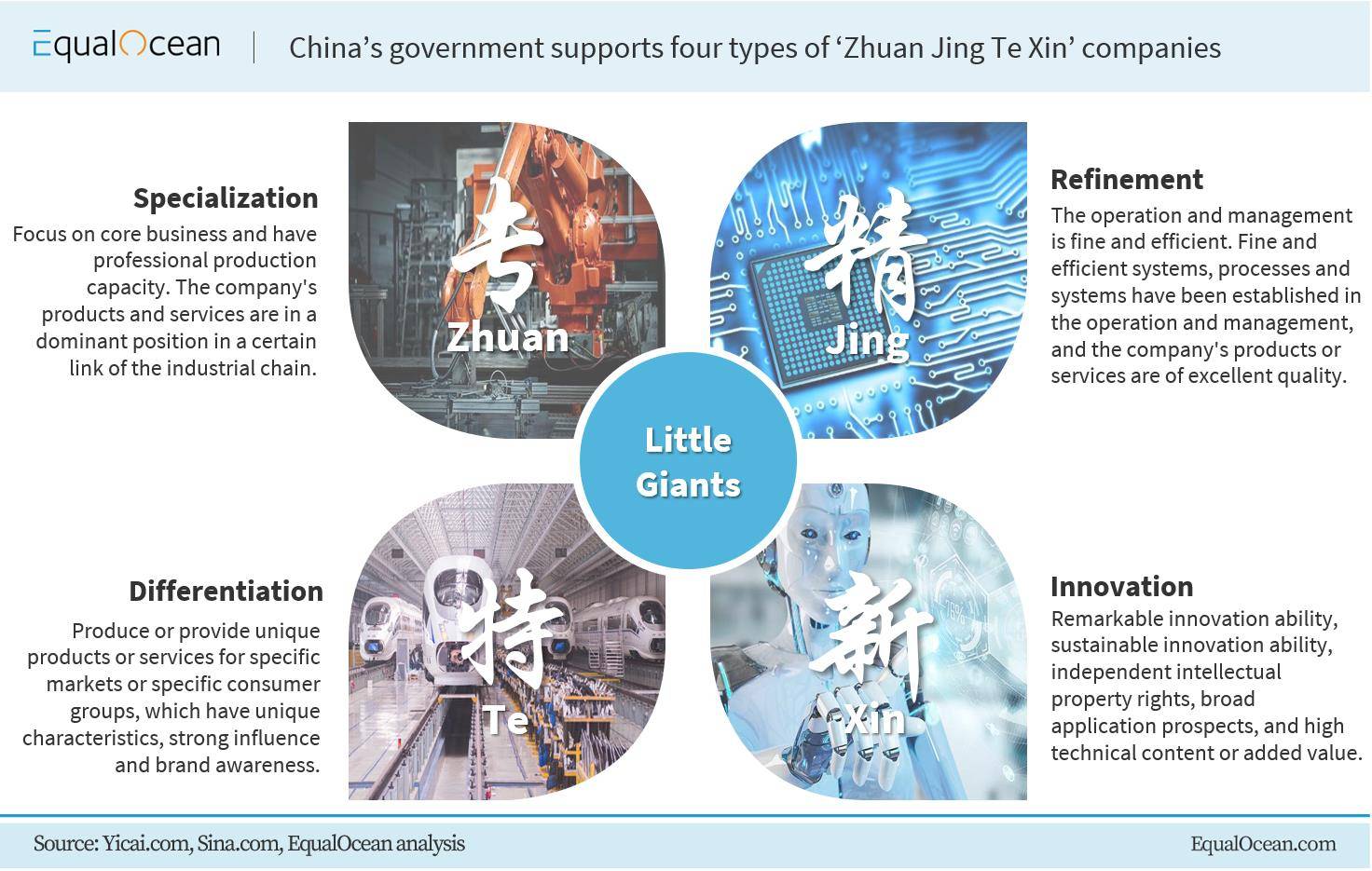 In the following three years, these companies developed into excellent companies focusing on specific market segmentation, showing strong innovation ability and mastering key technologies, which has indirectly contributed to the change of China's science and technology pattern in emerging markets.

As shown in the figure, 88% of the companies in the MSCI index are from China. Meanwhile, in 2020, 67% of Unicorn companies in emerging markets came from China. We believe that these data show a great relationship with the change of China's policy direction in 2018.

Compared with the first and the second generation, entrepreneurs of the third generation don't have to worry about getting rid of poverty and improving life. They generally have a high educational background, have stronger abilities, and dare to innovate in technology and science. Moreover, these entrepreneurs generally have a strong sense of rules. The younger generation pays more attention to the use of modern enterprise systems to run companies. They would like to pay more attention to the social impact of companies and individuals and are equipped to responsibly helping give back to the state and society.

In recent years, a series of events such as Huawei's business restrictions indicate China's bottleneck issue within the international community. Entrepreneurs of the third generation believe more and more that owning core technology patents is more important than user base growth (focus more on to business rate than to customers). It also indicates that large opportunities will no longer belong only to Internet companies represented by BAT firms (Baidu, Alibaba, and Tencent). E-commerce as represented by Alibaba achieved commercial success by relying on the business model with the era dividend arising from the fact that China's manufacturing industry has not developed rapidly and there is a lack of supervision in the early 21st century. However, the vast majority of Internet companies cannot be called technology-based companies. Nowadays, under the background of policy support and talent dividend, opportunities begin to belong to companies and teams with industrial experience and corresponding technologies. Although there may show a Matthew effect in the competition pattern, we believe that, in the future, the leading companies of China will no longer be traditional Internet companies.

This change of eras can also be reflected in geographical distribution and industry distribution.

On the one hand, from the view of geographic distribution, we selected the Chinese A-share STAR market companies as the analysis target and selected all 341 listed companies for analysis. We found that unlike the first- and second-generation entrepreneurs who concentrated their headquarters in four cities of 'Beijing Shanghai Guang Shen' ('Bei Shang Guang Shen', please check our former analysis for more information), Jiangsu has become a new gathering place with 64 STAR market technology companies. In addition, there are also many STAR market technology companies in Zhejiang, Shandong, Anhui, Hunan, and Sichuan. Analyzing the common points of these provinces, we find that they are mainly located on the eastern coast. On the east coast, we believe that the area has focused on independent innovation to drive China's economic development (please check our former analysis for more information). In other words, these areas are the practitioners of the national 'Zhu Jing Te Xin' policy and the areas with dense industrial belts. Once, people came to the metropolis with a desire for resources. At present, the rising second and third-tier cities and cities located in other regions, especially in the eastern coastal industrial belt, seem to be able to meet that desire, and can also take advantage of regional industries to reduce operating costs. In other words, against the background of 'Zhu Jing Te Xin', the opportunities for China's future global companies will no longer belong to 'Bei Shang Guang Shen', and the degree of enterprise clustering and regionalization will increase. For example, in the Pearl River Delta, 3C industrial clusters are relatively developed; in Suzhou, the photovoltaic industry has gradually formed industrial clusters. In Wuhan, the automobile industry is relatively concentrated.

On the other hand, the industry layout also indicates a change. Among the 341 listed companies in the STAR market, there are 52 companies from the information technology industry, accounting for more than 40% of all companies. It is followed by the biological industry, advanced manufacturing, and new materials industry, with 29, 17, and 16 companies respectively. Obviously, key and core technology have become the main direction of entrepreneurship for the new generation of entrepreneurs.

Geography and industry distribution provide an important reference for us to screen entrepreneurs who may be successful in the future.

In 2019, EqualOcean held the World Innovators Meet (WIM) 2019 in China and published WIM Presents Outstanding Overseas Returnees Entrepreneurs (please check here) of 2019 filtering 100 returnee-entrepreneurs to the investors. The list caused nationwide repercussions and some entrepreneurs on the list have grown to business elites, such as RED's CEO, Charlwin Mao.  Two years after, with the rapid change of the political environment, technology environment, and business environment, it is time for us to name some entrepreneurs that are worthy of bet for the next five to ten years. We meticulously picked five entrepreneurs in the five areas that have potential in China. All of the candidates we picked have international high-educated backgrounds, focus on key and core technology, formed their businesses as ToB instead of ToC, and founded companies experiencing at least Series B financing evets.

Wang Chen, a co-founder of Cider, graduated from the University of California, Berkeley with a bachelor's degree in Applied Mathematics. He worked for KKR Group and IDG capital before he found his own businesses. Cider is cross-border e-commerce for generation Z. It mainly produces low-cost products and popular women's clothes. The company upgraded the traditional manufacturing industry through artificial intelligence, big data, and algorithms, built an intelligent chemical plant, and upgraded the traditional cross-border clothing e-commerce model (price-driven to technology-driven). Cider has accumulated one billion mentions on social media around the world, covering consumers from more than 100 countries. At present, it has branches in China, the United States, South Korea, and Australia, and has more than 2 million fans around the world. At the end of September 2021, Cider completed Series B financing of USD 130 million, led by DST Global and followed by Greenoaks Capital and A16Z. This is Cider's fourth financing since its establishment in 2020. At present, Cider's valuation has exceeded USD1 billion, making it one of the fastest-growing Unicorn companies in the world.

Dr. Ding Jianwu, the founder of GW LaserTech, is a top expert in the field of fiber laser. He obtained a Doctor Degree in Electronic Engineering from Pennsylvania State University. He used to work for several international well-known companies such as Nufern and Prima, focusing on the research and development of fiber lasers for nearly 20 years. His business, GW LaserTech, is a high-power fiber laser technology provider, focusing on providing users with services such as fiber laser assembly and application solutions. Its products include 3,000W single-mode continuous fiber lasers and 4,000 to 15,000W SMAT laser IOT smart cloud platform. Before October 2021, the company has nearly 100 patents, most of which are invention patents, and has obtained the national high-tech enterprise certification and national 'Zhuan Jing Te Xin' certification. In March 2021, GW LaserTech completed strategic financing and raised over CNY 200 million, which will be used for the large-scale production of a new generation of 10,000W laser products based on the high-efficiency and energy-saving 976nm technology route.

Liang Han, a co-founder of Precision Scientific, graduated from Peking University with a bachelor's degree and a doctor of computational biology from Preston University. He once served as the deputy director of the famous MD Anderson Cancer Center and received funding from many well-known organizations, including the National Cancer Institute, the International Cancer Genome Consortium, the Cancer Genome Atlas, and genetic data Commons. Since 2012, scientific research has attracted extensive attention all over the world. Precision Scientific is a new platform company driven by multi-omics and data mining and focusing on the differentiated research strategy of innovative drugs. With advanced multi-omics technology, bioinformatics, and AI algorithm as the core, the company provides pharmaceutical companies and biotechnology companies with innovative services such as drug mechanism research, biomarker discovery, clinical statistics, central laboratory, and concomitant diagnosis development. At present, the company has formed in-depth cooperation with a number of large pharmaceutical companies and biotechnology companies, such as Rundo Research & development. In September 2021, Precision Scientific completed the Series B financing and raised CNY 150 million. It is worth mentioning that the old shareholder Innovation Workshop continued to increase large investments.

Ma Zhenren, the founder of Chuang Inceptio Technology, graduated from Shanghai Jiaotong University in electronic engineering, obtained his Master's of Electronic Engineering at the Illinois Institute of Technology in Chicago, and obtained an MBA at IMD in Switzerland. He used to serve as the general manager of the Strategic Development Department of Tencent and the managing director of A.T. Kearney. Inceptio Technology, founded by him, is an automatic driving technology research provider, focusing on L3 and L4 automatic driving landing logistics operation business in open intercity roads. The company also provides various modes of automatic driving Transportation Asset Services and is committed to improving the safety of logistics truck driving. Winning technology has the whole stack self-research vehicle level L4 automatic driving system (including algorithm, software, computing platform, wire-controlled chassis), and is expected to achieve L3 mass production in the world. In August 2021, Inceptio Technology announced the completion of Series B financing and raised USD 270 million. Many well-known companies are involved, such as JD, Meituan, CATL, NiO, Deppon Express, and IDG capital.