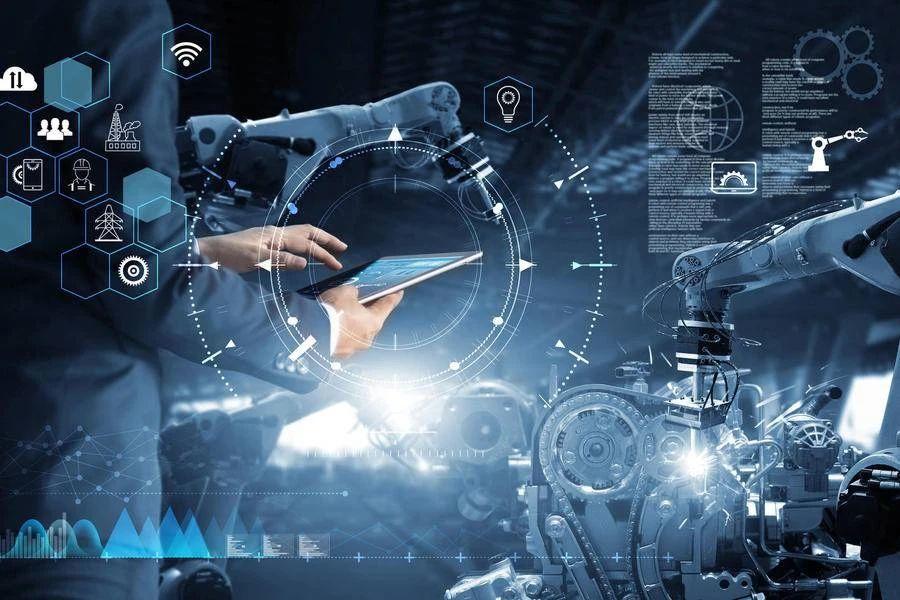 Liu Chuanzhi, former president of Lenovo, has mentioned that Deng Xiaoping was his role model because helped China move into a new era. This is not surprising, because Deng Xiaoping's southern tour saved the plan for Chinese economic reform as well as the national capital markets and encouraged the development of private companies. It can be said that this was the greatest contributor to China's rapid development over the last 30 years. Many familiar companies were born or rose during this period, such as Huawei, Lenovo, and Evergrande.

But now, the policy wind seems to be changing, and the new 'Zhuan Jing Te Xin' (Chinese: 专精特新) companies are quietly on the stage of history. We have reason to believe that after many years, these entrepreneurs of emerging companies will recall the current collective leaders and regard them as role models. This article aims to help investors better understand this change and discover future investment targets.

The era of 'little giants'

'Zhuan Jing Te Xin' (Specialization, Refinement, Differentiation, and Innovation) companies is a concept put forward by the Ministry of Industry and Information Technology (MIIT) of China in July 2011, which represents four kinds of small and medium-sized companies that China will focus on in the near future, as shown in the figure. Most of these companies are characterized by strong profitability, large growth space, and high R&D expenses. On April 26, 2012, the State Council of China issued the Opinions of the State Council on Further Supporting the Sound Development of Micro and Small-sized Companies, which proposed encouraging technologically advanced 'Zhuan Jing Te Xin' companies for the first time. After that, the Ministry of finance of the Chinese Government allocated CNY 10 billion to support three batches of thousands of 'Zhuan Jing Te Xin' emerging companies. 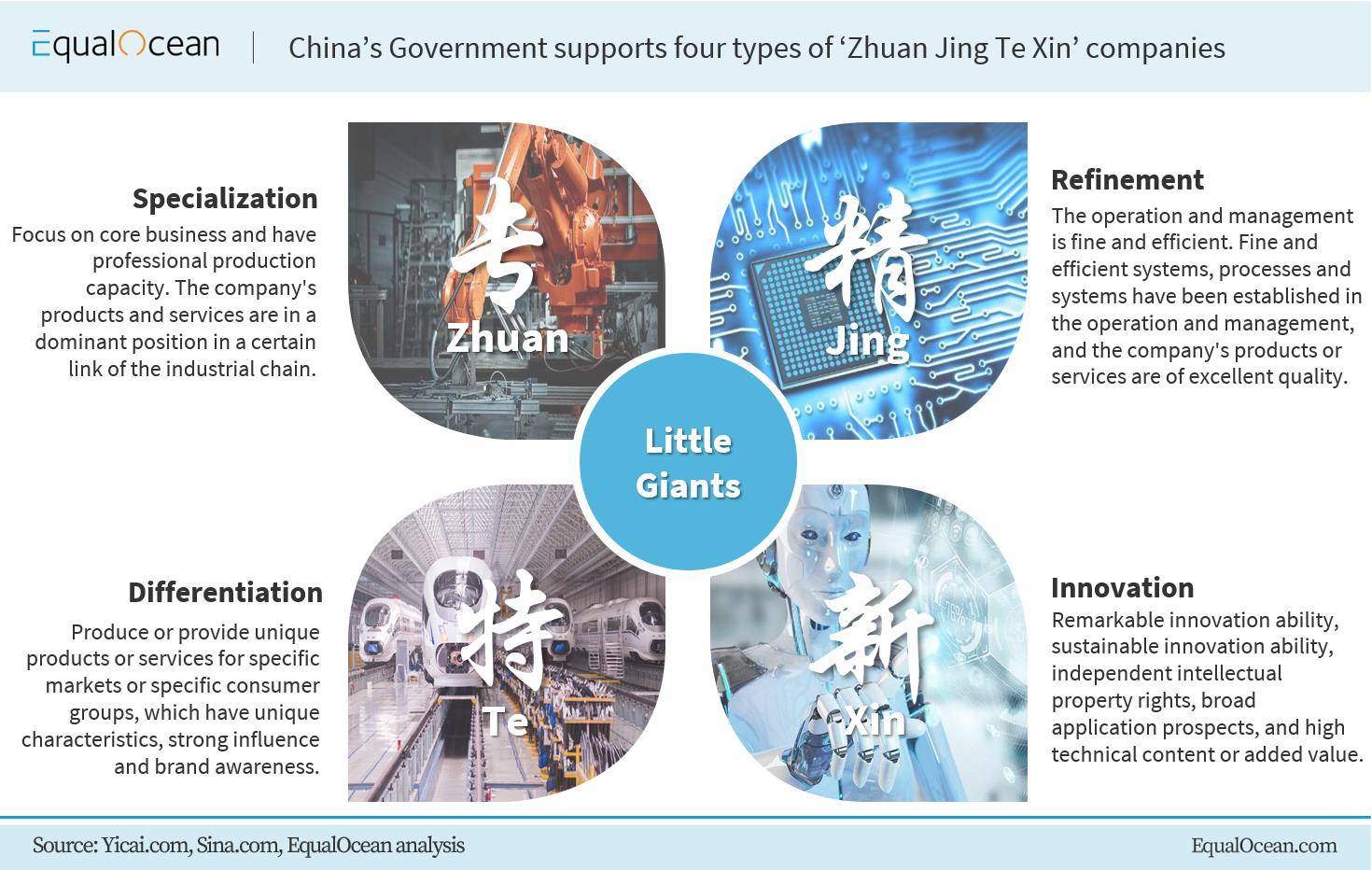 The policy is a bullish stimulation to China's small and medium-sized companies. On the one hand, the policy reduces the innovation cost of these companies, which will also bring a brand effect to the selected companies and attract more high-quality funding resources. On the other hand, the policy encourages small and medium-sized companies to cooperate with industry leaders in innovation. To a certain extent, these companies can speed up the pace of innovation and improve innovation efficiency with the help of the influence of industry leaders and relevant resources.

When analyzing distribution statistics, we found that the 'Zhuan Jing Te Xin' companies are concentrated on the eastern coast of China. It can be seen that from the chart that these are obviously densely distributed in developed areas of China, such as Bohai Bay, Yangtze River Delta, and Pearl River Delta. This coincides with the different functions of the four regions summarized in our previously published articles (check here).

From the perspective of industry distribution, 'Zhuan Jing Te Xin' companies are mainly concentrated in the field of advanced manufacturing. Take public ones as examples, among which mechanical equipment companies account for the largest proportion 26.2%, while chemical, pharmaceutical and biological, electrical equipment companies account for 15.3%, 11.8%, 10.2%, and 7.3% respectively, which means the top five 'Zhuan Jing Te Xin' sectors accounts for 71% of the total with a high concentration trend. Analyzing these public companies, we found most companies have a market cap of less than CNY 10 billion. However, the gross profit margin and R&D expenditure of these companies are at a high level. 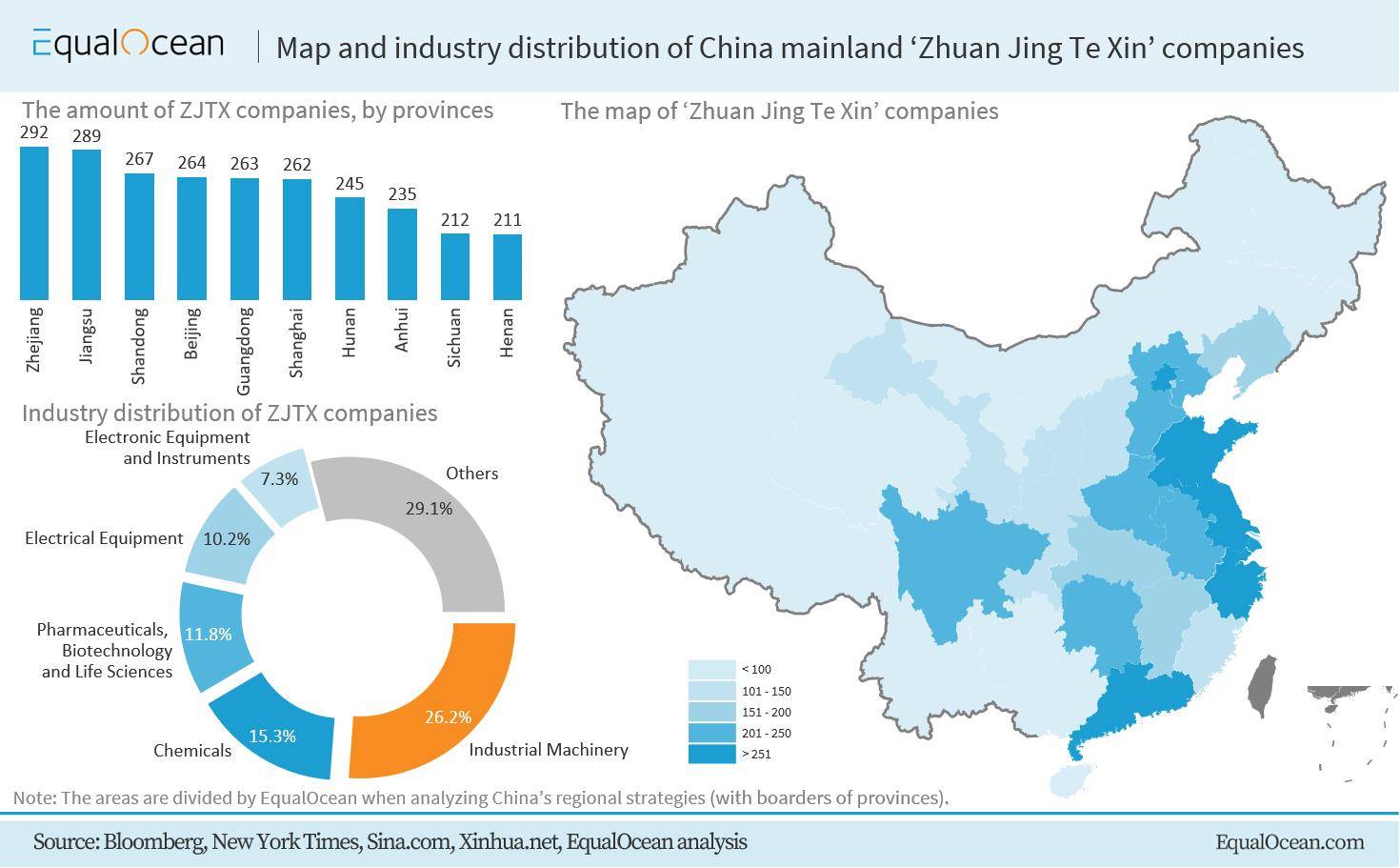 Most importantly, we believe that 'Zhuan Jing Te Xin' is an important signal from the Chinese government. At the same time, it also means that the developing focus of China's economy is changing, which can bring about changes in China's investment logic. In other words, the Chinese government now puts more effort into supporting companies that certain micro-sectors (becoming market segment leaders and rule-makers), rather than companies (check here), the so-called hidden champions.

Practice and inspiration from Germany

The term 'hidden champion' concept was proposed by Hermann Simon, founder of Simon-Kucher & Partners. There are three criteria: first, they occupy the leading position in the industry; second, they generally have USD 2 billion revenue; third, although it is famous in its professional micro-sector, it is not known by the general public. At present, there are about 2,734 hidden champions in the world, and Germany developed 1,307 of them, ranking top in quantity. For example, Würth Group is a hidden champion in the field of screws and nuts, with 300 sales outlets in more than 80 countries around the world. The application of its products covers broad industries, from space satellites to children's toys.

How could Germany make it happen? In the 19th century, when the British completed its Industrial Revolution, Germany was still an agricultural country. However, while imitating the British experience (German products were considered low-quality products at that time), Germany continued to innovate, according to the market demand. More importantly, Germany has also strengthened its investment in the military industry sector to build an industrial base beyond consumer manufacturing. With this long-term strategy, Germany has now become a powerful manufacturing country and has yielded a large number of industrial and manufacturing leaders such as Siemens, Bosch, Volkswagen, Daimler, and BMW, as well as tens of millions of small and strong industry leaders (hidden champions).

Analyzing the national policies on the Internet and advanced manufacturing in the recent ten years, we have found that China has learned a lot from the development model of Germany. As stated in another article, China mainly relies on the development of the real economy to develop as Germany did, rather than relying on consumption and finance to enhance its national strength like the United States.

There are four reasons why we think China can do this: first, China is the largest single market and may grow into the largest single consumer market in the future; second, China is the only country covering all ISIC industrial categories globally, which can help it reduce operating costs\and shorten the response time to new tech forms; third, China supports large-scale infrastructure construction, so as to further enhance production efficiency and reduce costs; fourth, China is gradually changing from relying on the demographic dividend to relying on talent dividend. Most developed and developing economies do not have all these four characteristics, which makes it more possible for China to complete industrial upgrading and incubate new hidden champion companies (from 'Zhuan Jing Te Xin' ones).

At the same time, China is also actively acquiring German champion companies to help Chinese companies grow. Chinese industrial robot manufacturer Estun Automation announced the completion of the acquisition of German welding robot giant CLOOS. CLOOS is the global hidden champion in the field of medium and heavy plate welding, and also occupies a pivotal position in the fields of sensors, positioners, and safety technology.

It is worth noting that China has vigorously developed specialized and new companies and created hidden champions in the past 10 years. In essence, we believe that this is closely related to the changes of the eras of Chinese Companies – the rise of the third generation of entrepreneurs.

Three generations of entrepreneurs in China

Following Deng Xiaoping's Southern Tour in 1992, China experienced three entrepreneurial eras. The first generation were entrepreneurs represented by Liu Chuanzhi, who founded Lenovo, and Xu Jiayin, who founded the Evergrande Group. Entrepreneurs from this era usually have the characteristics like less education, with a strategy of mimicking products and services from developed countries and embracing little innovation. They are committed to breakthroughs in manufacturing and hardware technology. At that time, companies mainly focused on survivorship but also had the idea of revitalizing China's real economy. The second generation is represented by Jack Ma, who founded Alibaba, and Pony Ma, who founded Tencent. Entrepreneurs from this era generally have better education and were able to take advantage of the demographic dividend and the development dividend of the rise of the Internet, and their developments rely most on the growth of user base (to customers, Toc). Although this generation of entrepreneurs may have the spirit of innovation, there are still many companies that take imitation as the main strategy. At the same time, these entrepreneurs also found the loophole of imperfect supervision and experienced endless expansion, and finally became well-known giants.

The third generation of entrepreneurs appeared after 2018. In recent years, a series of events such as Huawei's business restrictions indicate China's bottleneck issue from the international community. Benefiting from 'Zhuan Jing Te Xin' policies, entrepreneurs in this era generally believe that owning core technology patents is more important than user base growth. Entrepreneurs in this era generally have high educational backgrounds and dare to innovate. The companies of these entrepreneurs have gradually changed from to-customers (ToC) to to-business (ToB), and focus on only one certain sector. Yu Kai (founded Beijing Horizon Robotics Technology, 831740: NEEQ), Dai Wenyuan（founded 4Paradigm), Chen Yunji & Chen Tianshi (founded Cambricon Technology, 688256:SH) and Zhang Nangeng (founded Zhejiang Canaan Tech, CAN: NASDAQ) are the representatives of the era.

Never deny the development of the private economy

Many people may interpret the phenomenon of stricter regulation in China in recent years as that China no longer encourages the development of private economies and is trying to reverse the wheels of history. However, we think this is inaccurate. China still encourages the development of private companies. Nevertheless, now it encourages ToB companies of the third generation of entrepreneurs with key technologies and patents rather than ToC companies of the first and second generation of entrepreneurs.

From a historical point of view, the rise of many countries has a process of imitating the products of advanced economies (usually at this stage, their products will be considered as low-quality), and Germany, Japan, and China are no exception, but this development model will face a bottleneck problem when a country becomes powerful. With the enhancement of China's national strength and the continuous improvement of the industrial chain, China has reached such a period when it can no longer enter the next stage of development through simple imitation. 'Zhuan Jing Te Xin' policies and the third generation of entrepreneurs came into being against this background. Moreover, compared with state-owned companies with less inefficient incentive effects, private companies are the blue ocean in which the two play a role. To sum up, it is worth noting that the current investment logic has changed. China no longer encourages companies in the same way as in the previous era but encourages companies for the next era.