Tuya: Overvalued, Risky, But Worth Watching

The Chinese AIoT leader is facing some challenges, which it's rather well-equipped to deal with. 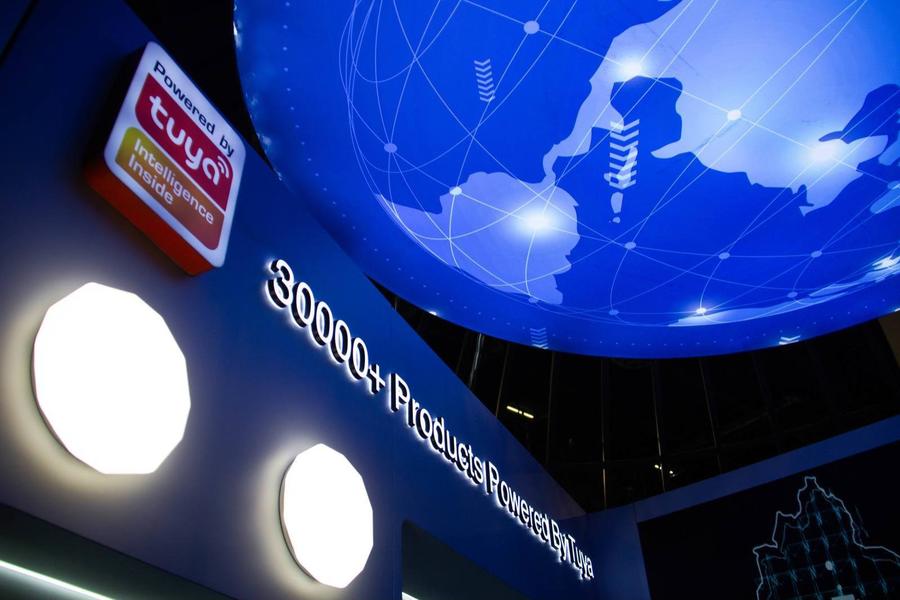 On March 18, 2021, the popular Chinese Internet of Things company was listed on NYSE with the ticker symbol of 'TUYA.' According to its prospectus, Tuya offered 43.59 million American depositary shares (ADSs) in its IPO. The company has raised up to USD 872 million in the U.S. market and is expected to have 417.36 million ordinary shares outstanding and 142.4 million Class B shares after that. Its stock price surged to USD 26 on the first day but then dropped to around USD 22 and closed the week slightly higher, at USD 24.64. In this article, we will analyze the company's investment potential. 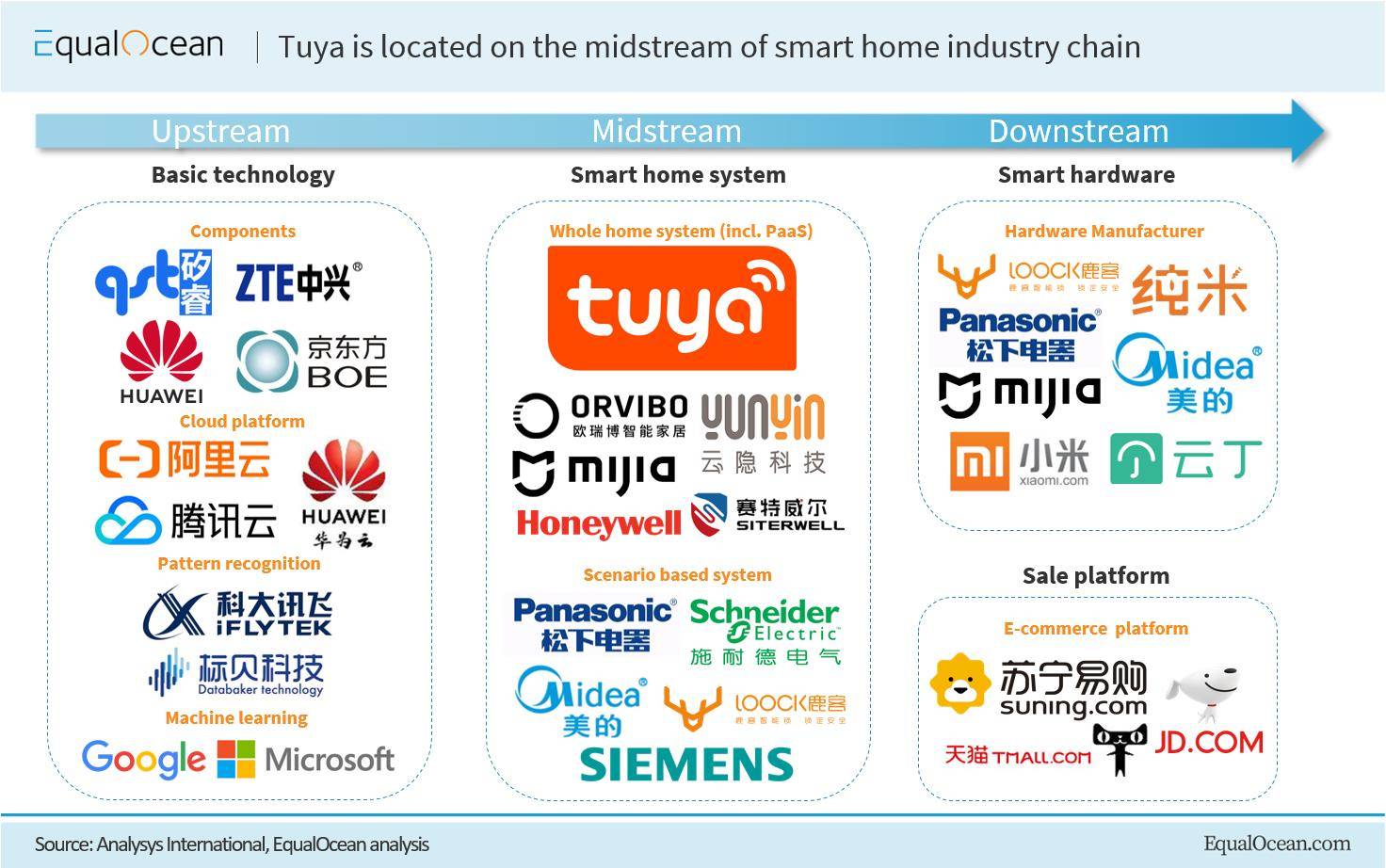 Tuya is a midstream company in the smart home sub-industrial chain. The company's target customers can be divided into two groups. The first group consists of companies that produce intelligent devices. Tuya provides complete one-stop equipment intelligent services, including Cloud module, IoTOS, Cloud IoT service, and client apps them. The other group contains individuals favoring the smart home system. At present, through its 'Powered by Tuya' system, the company has provided technical support for smart devices for many global large companies, such as Softbank, Lenovo, Samsung, Midea and TCL. 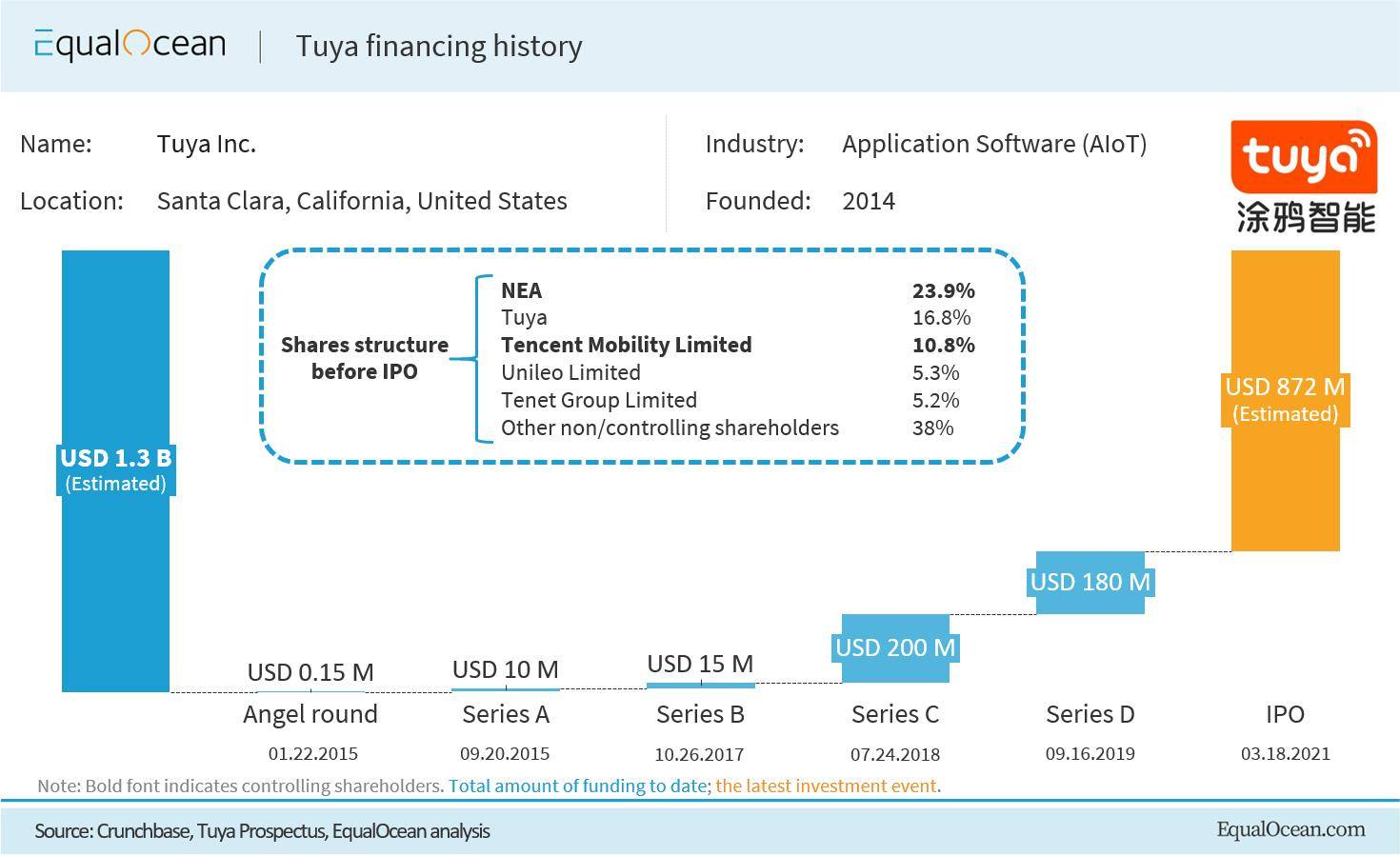 Looking back to its financing history, before its IPO, Tuya received five rounds of investment since 2015. NEA, the world's largest venture capital firm, is the largest and the first institutional investor and had 23.9% equity of Tuya prior to its IPO. Also, it is worth noting that the latest statement also shows that Tencent has invested in Tuya twice since 2019 and became the leading investor in Series D (which was not disclosed before). It held 10.8% shares before the IPO. The IPO's subscribers include Morgan Stanley, BofA Securities, China International Capital, Tiger Securities, and CMB International Capital, with a total intention of USD 500 million. By analyzing Tuya's investor lineup, we think a cascade of institutional investors is rather optimistic about Tuya and its AIoT capabilities.

At the beginning of 2020, when the COVID-19 epidemic disrupted the Chinese market, Tuya seized the opportunity to expand its business and client base. Tuya's active layout has seen good development in the past year. As of December 31, 2020, Tuya had attracted more than 262,000 registered developers to its platform. The platform has increased active users with more than 122 million interactions and about 84 billion device requests per day. Throughout 2020, the number of devices powered by the Tuya system reached 204 million. By the number of smart devices empowered in 2020, Tuya has become the largest AIoT PaaS platform in the global market. 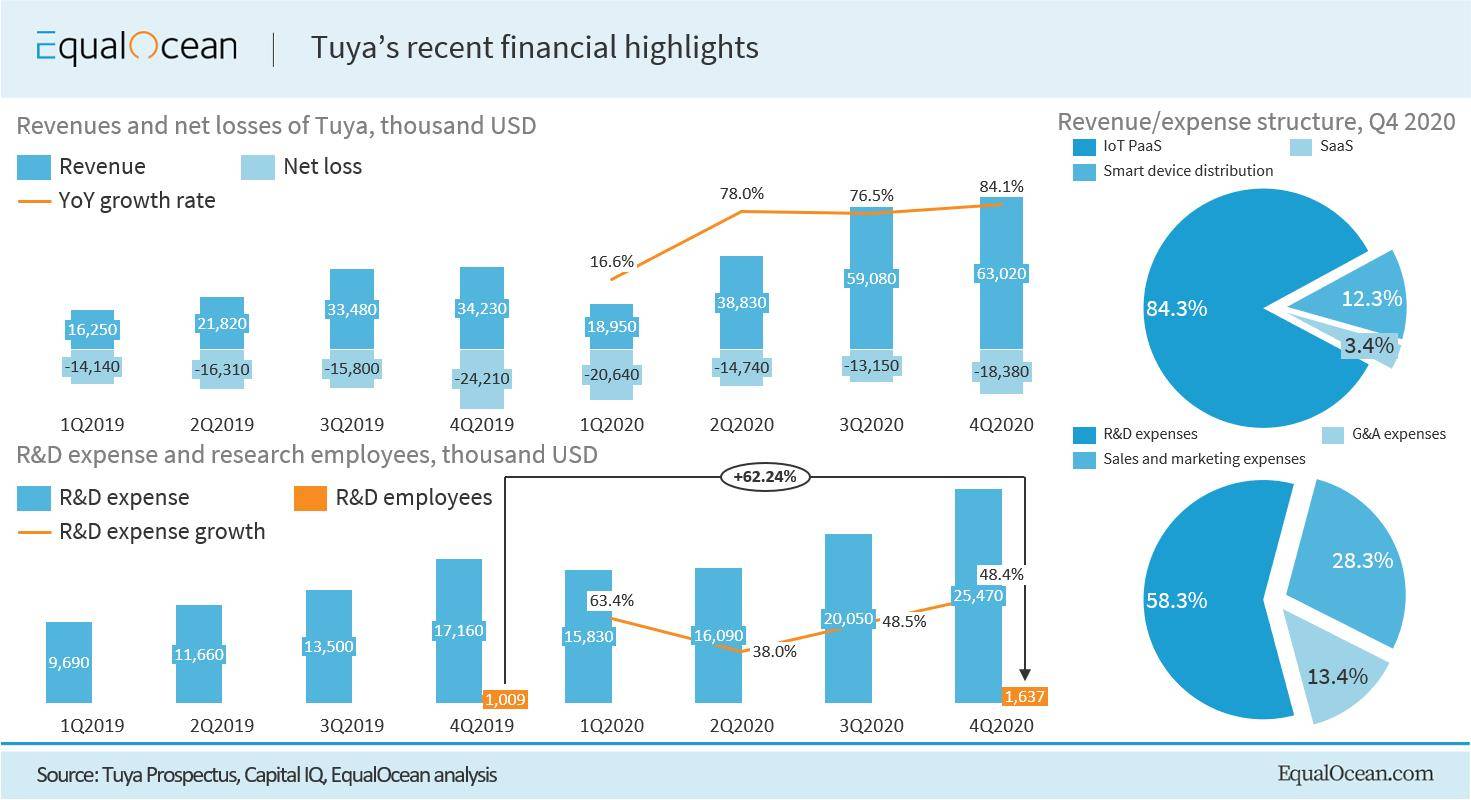 Tuya also has a remarkable performance in recent years. Its revenue in the fourth quarter of 2020 reached USD 63.02 million, up 84.1% year-on-year. From the perspective of the whole fiscal year of 2020, the company earned a revenue of USD 179.9 million, up 70.1% more than the prior year. Tuya's revenue is mainly contributed by three segments: IoT PaaS, distribution of smart devices, and SaaS. Its core revenue is generated from the IoT PaaS business, accounting for 84.3% of its total revenue (2020). For customer distribution, Tuya has a global customer base, spreading from America, Europe, to the Asia Pacific regions. Notably, the company's gross profit rate increased from 26.3% in 2019 to 34.4% in 2020, showing strong growth momentum and potential.

Although Tuya is still suffering from net loss and negative net cash flow, its net loss has narrowed year-on-year (from USD 70.5 million to USD 66.9 million). Regarding expenses, Tuya's operating expenses increased to USD 131.78 million in 2020, up 30% year on year. It is worth noting that Tuya's R&D expenses in 2020 were significantly higher than that of the previous year (up 48.9%, higher than the growth rate of total expenses).

According to the prospectus, Tuya's R&D team has 1,637 people, expanding over 60% in only one year. On this basis, we think that the increased expenses are a good sign. However, due to the increasing R&D expenses and related administrative fees, the company may still face occasional net loss in the short term, like its competitors, which is also partially caused by three large obstacles in the industry.

Although IoT has developed for decades, especially promoted by industry upgrade and intellectualization in recent years, the industry has been facing at least three main problems.

The first problem is security. Unfortunately, every link of the AIoT industry chain may have security risks, especially in the production and usage links. Equipment updates vulnerability, eavesdropping, and blackmail software make the security maintenance of IoT systems difficult. There have been many security incidents around the IoT area. For example, in October 2020, Tencent captured a new variant of Watchbogminer, a mining Trojan horse, which used Apache Flink to attack the IoT system and virtual machine.

Secondly, the IoT industry lacks a unified standard. The IoT industry involves a huge industrial chain and segmentation. In different scenarios, the technical requirements and standards are quite different and even support different IoT protocols. For example, within the wired communication link alone, a variety of technical differences exist in the market, including TCP / IP, KNX, RS485, CAN-bus, LonWorks, and PLC. Different technologies greatly increase the difficulty of forming a uniform industry standard.

Finally, there are difficulties in the popularization of intelligent devices in the manufacturing link, which is largely caused by the high R&D cost of smart devices' development and the need for long-term accumulation. With the continuous digital upgrade in related industries, some traditional companies intend to produce IoT intelligent devices. But they usually find an overwhelmingly awkward situation when facing unfamiliar processes such as Cloud infrastructure, interface and communication protocol, and App development. What is worse is that the current major players are mainly focusing on developing their intelligent systems, and there is a lack of customer consensus on installing multiple systems in their homes. In this case, customers are unlikely to experience a satisfactory user experience, with an overload of technical information. All of these issues have caused unpopularity and low profitability in the IoT and intelligent Internet sectors.

Tuya could be a key to the obstacles

Deeply digging the company's businesses, we think Tuya can deal with these challenges. For security, Tuya is not only building an AIoT development platform but also helping developers to create their own ecology. As we mentioned, the company has attracted nearly 20,000 developers to jointly design intelligent solutions for multiple industries. Tuya's community has a remarkable advantage: it makes clear the role distinction between the platform and customers. For the users of the platform and their device data, the platform side needs to obtain the authorization of customers and users to access it. At the same time, the company is also building a defense system to prevent network intrusion based on the received user data. All these functions ensure the security of its platform.

Besides its efforts in security, Tuya has another advantage: the companies with weak intelligence backgrounds can reduce the difficulty and shorten the cycle of intelligent core hardware development through Tuya's module. Companies can complete the research of intelligent equipment from traditional equipment to a time as short as 10 minutes and realize mass production in 15 days, using Tuya's AIoT based platform. With the AIoT platform as the core, more and more developers are designing their intelligent products through the Tuya developer platform, which should eventually popularize this technology. With its continued expansion of the community, Tuya’s strategy is also conducive to the formulation of unified industry standards. 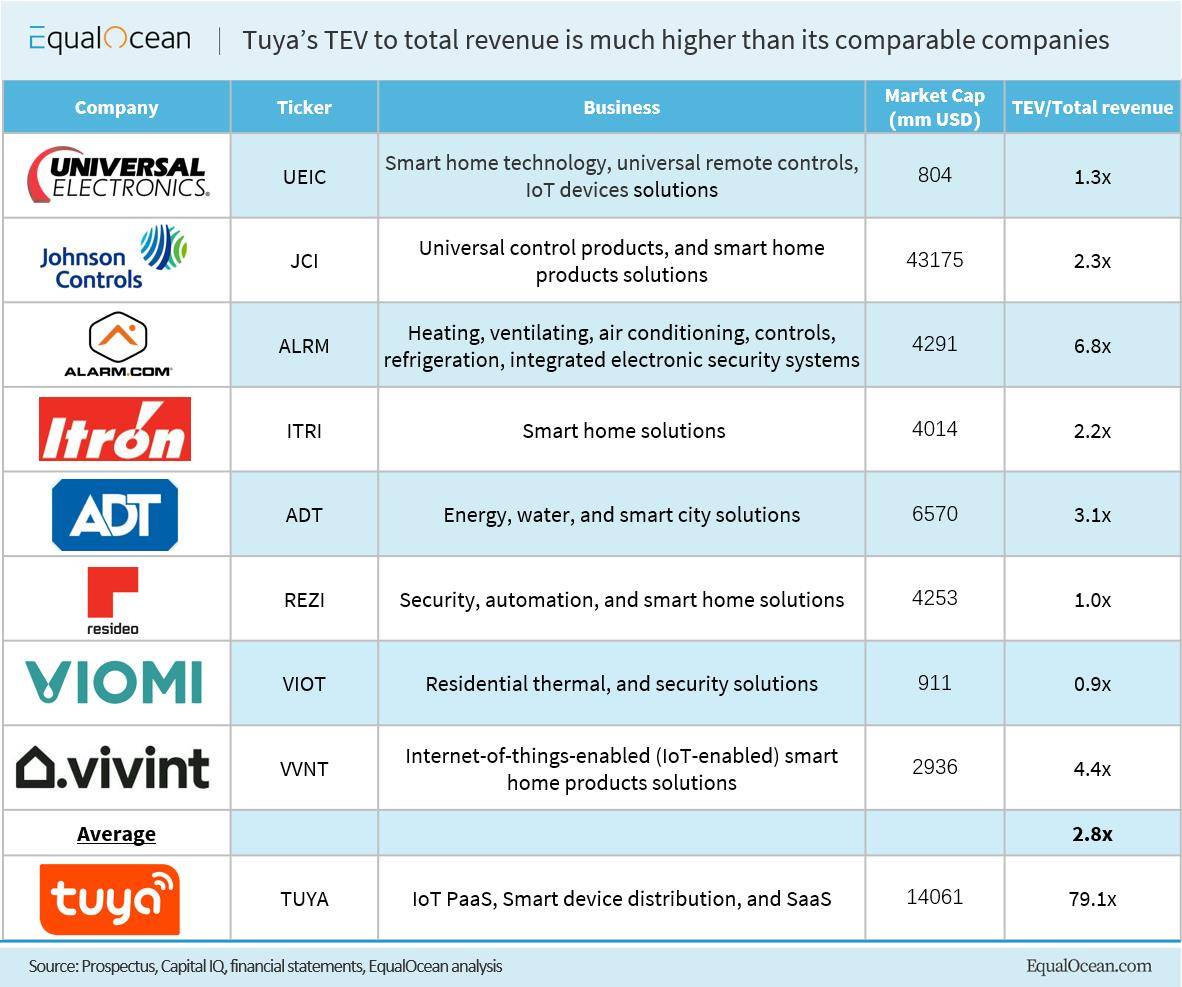 We believe Tuya's stock price is overvalued now, based on TEV to total revenue ratios analysis. We chose several public companies with similar businesses for comparison. Based on the statistics, we found that Tuya's ratio (79.1x) is much higher than its competitors, indicating it is not a good time to long its stock. Nevertheless, we believe Tuya is a company with great potential in the AIoT sector, and the recommendation may also change in the future.

Though expanding to the health and industrial sectors, at present, Tuya still relies on smart-home-related business to make a profit. However, the smart home only accounts for about 14% of the market share of IoT terminal application scenarios, which means expansion is inevitable. Finding a balance while expanding is a challenge for the company. (Risk: High)

The sector Tuya is operating in faces high new entrance risks and fierce competition. A great number of traditional home appliance companies are developing their intelligent systems, such as Midea and Haier. Tuya, as a non-manufacturing company, has an insufficient competitive strength compared with them. Besides, global Cloud giants, including Alibaba, Huawei, Xiaomi, and Amazon AWS, have participated in the AIoT PaaS market competition. Taking Xiaomi as an example, Xiaomi’s IoT platform links more than 85 million networking devices and has found over 400 partner companies. In the future, it is expected to become one of Tuya's main competitors. Whether the company can build a competitive advantage through a strong community amid the competition is uncertain. (Risk: High)