Weichai Power is on a fast-moving innovation cycle with its products – diesel engines – leading the industry to a higher standard and raising levels of environmental protection. 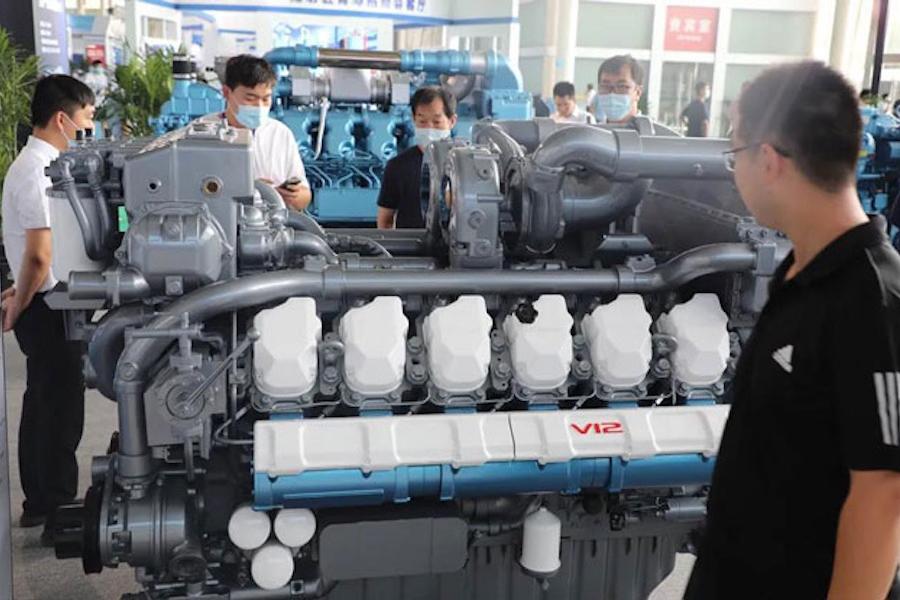 ● As a general trend, the popularity of digitalization is prompting firms like Weichai Power to conduct more experiments; the Chinese government is also putting more investment into new infrastructure to stimulate consumption.

● With the gradual recovery in consumption, the rising prices of the firm's upstream raw materials in the future could harm its profitability.

COVID-19 pressed ‘pause’ on a plethora of projects in China and harmed many massive firms' revenues, but Weichai Power – a vehicle equipment manufacturer – maintained a good performance during the epidemic period. 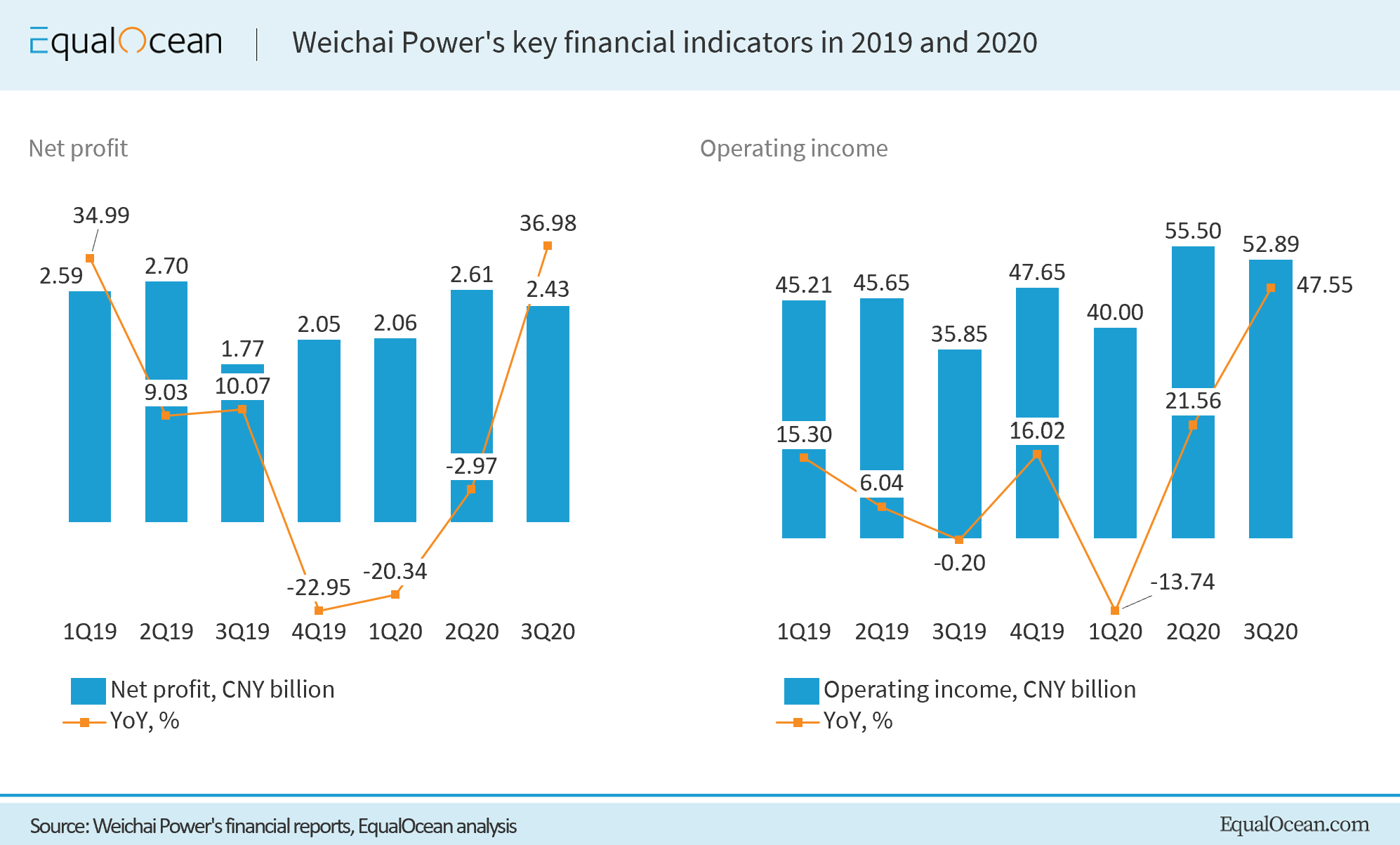 Weichai Power is one of Weichai's largest subsidiaries, the first firm to be listed in the Hong Kong Stock Exchange within the internal combustion engine industry. After setting up in 2002, the vehicle equipment manufacturer was already showing a rapid growth trend, with CNY 3 billion in operating income then compared to 2017's CNY 40 billion. This might be due to the firm's emphasis on technological innovation; it has built many R&D centers around the globe.

Why does Weichai Power need to innovate continuously? Two main reasons should be looked at. Firstly, COVID-19 accelerates digital consumption, which requires more intelligent equipment. Moreover, the fourth ‘revolution’ in technology will further trigger a giant cultural transition. Consumer expectations around environmentally responsible and Smart products will shift accordingly. Firms like Weichai Power must keep up with the times. Secondly, there are higher and higher official requirements for technology upgrades to keep them compliant with emission standards. According to China's ecological environment ministry, air pollution occupied the highest number of negative reports in October 2020, about 61.5%, indicating the severity of air pollution. 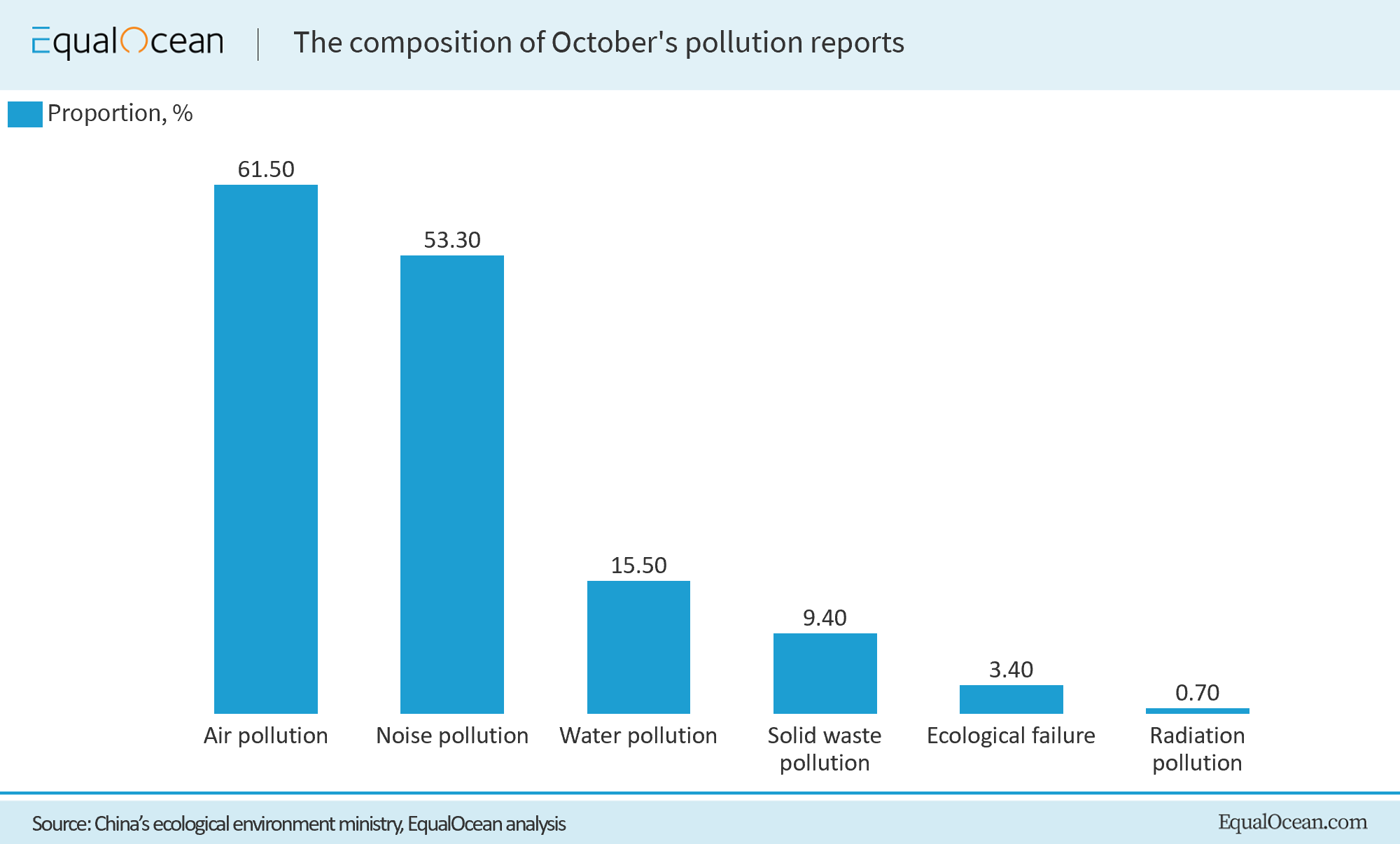 Apart from the above causes, three more beneficial factors also positively affect Weichai Power. To begin with, the firm's market share shows a rapidly rising trend. COVID-19 led to a downturn in the heavy truck market in January 2020, but this actually led to Weichai Power's increasing output during these periods, as original equipment manufacturers chose the firm with the highest customer satisfaction. As a result, the vehicle equipment manufacturer's market shares increased from December 2019's 17.13% to January 2020's 25.28%, a growth rate of 47.6%. With superior products and customer channels, its market shares are expected to keep growing. 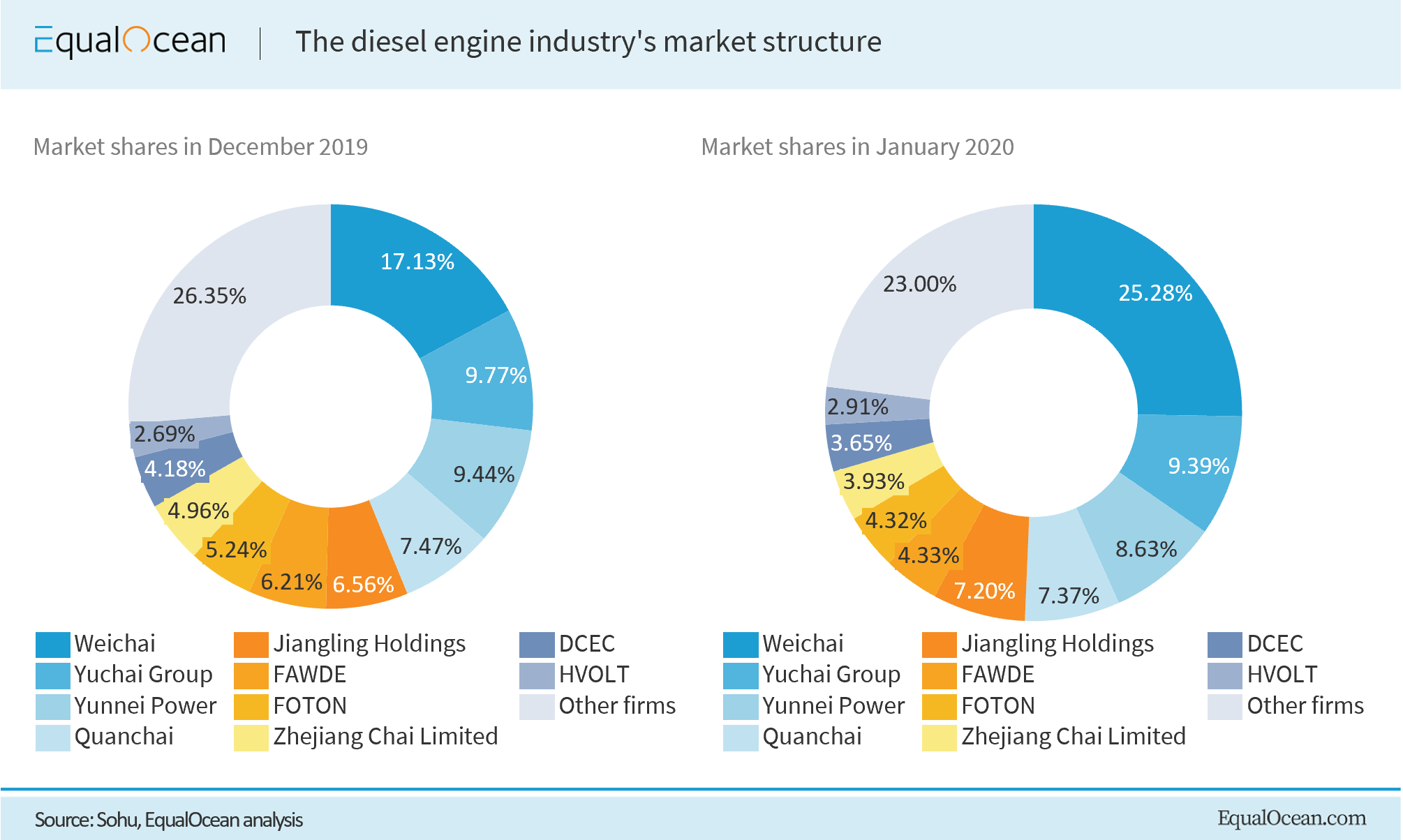 Next, the heavy truck industry is gradually recovering in the post-epidemic period, which will further benefit Weichai Power. As the industry was hit sharply by COVID-19 in the first quarter of 2020, Chinese governments put more weight on the new infrastructure, seeking to eliminate cars whose qualities are lower than the emission standard, triggering clients to change cars. Moreover, the increasing demand for logistics transportation also began to stimulate the need for heavy trucks. By the end of the third quarter of 2020, the sales volumes in China's heavy truck industry reached CNY 0.41 million, rising around 74% compared with last year. With the emergence of the vaccine, exports will recover rapidly, and the heavy truck industry's sales volumes are expected to maintain around CNY 1.3 million in 2021 and 2022. 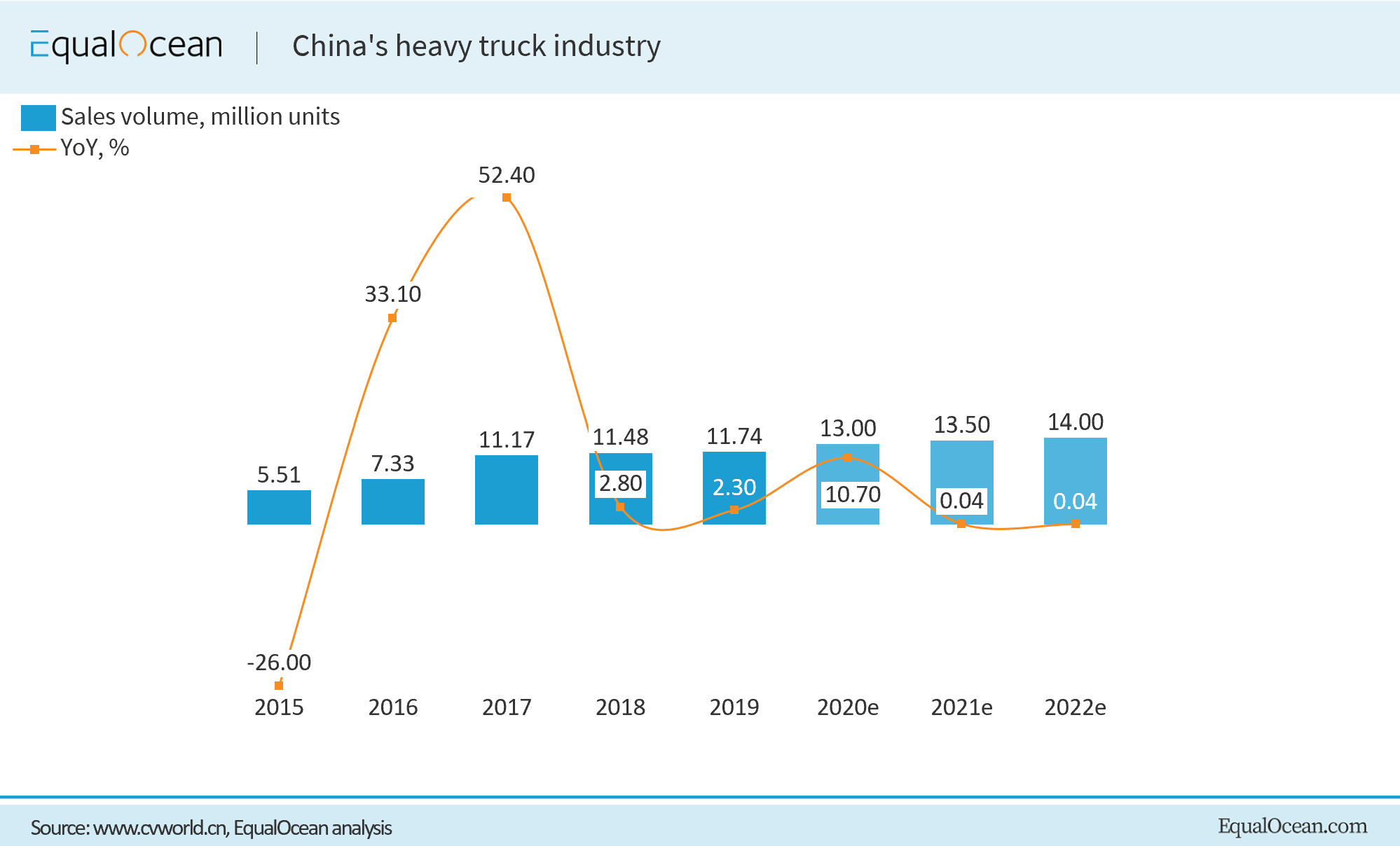 Weichai Power's advantages from investment in R&D and its debt paying ability have also contributed massively to its innovation. To do better than peers, the manufacturer should invest more in R&D expenses. Precisely, Weichai Power's R&D expenses increased by 21%, to CNY 5.23 billion in 2019, more than half of its net profits at the same time. Also, it used CNY 0.1 billion to award its outstanding technicians, spurring more innovation. Its receivable turnover ratios maintained good levels in these two years, indicating a comparatively good capital usage efficiency regarding its debt-paying ability. Its receivable turnover ratio in 2019 was about 11.27, higher than China’s average – 7.8  – but lower than the US's 15, so the firm still needs to improve in the future. 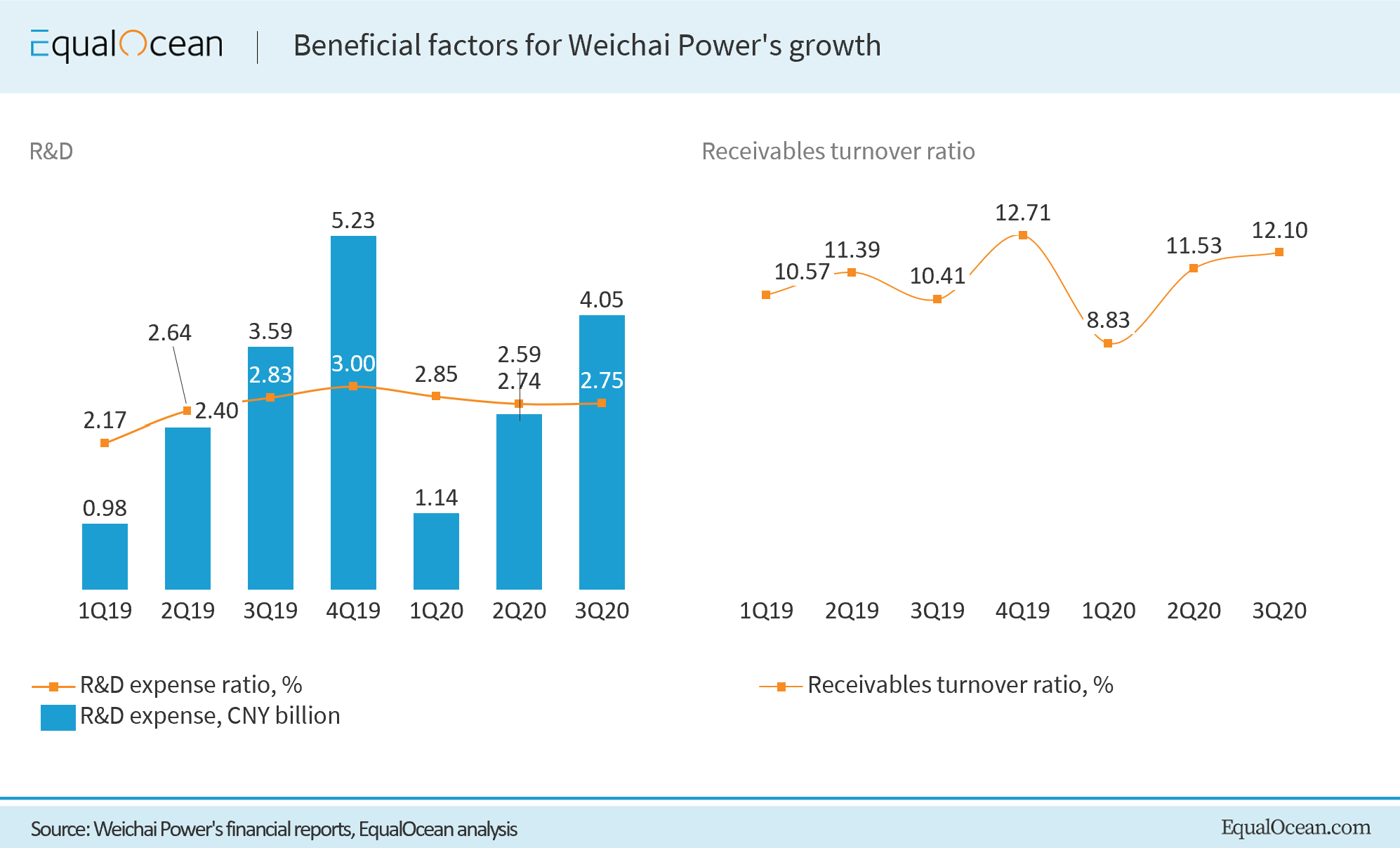 A diesel engine whose thermal efficiency broke through 50% was launched by Weichai Power in September this year, setting up a new standard globally. Specifically, thermal efficiency is a good benchmark to measure diesel engines' usage efficiency, the higher the thermal efficiency, the better the performance in energy conservation. From the user's perspective, it brings a better fuel economy. From a regulatory standpoint, it means lower carbon emissions. In other words, this innovation could be seen as a sign of Weichai Power's strong development ability, improving its competitiveness.

On the contrary, two more risk factors might negatively impact the firm's future performance. First, the heavy truck industry's upstream raw material prices show a rising trend, which will affect the vehicle equipment manufacturer's profitability. According to the China Iron & Steel Association, the domestic need for steel is in great demand, and the steel price is still in a rising trend. Precisely, Goldman Sachs has risen its price forecasts for iron ores, from 2021's USD 90 per ton to USD 120 per ton. Second, if the promotion of new products is lower than expected, there will also be a negative influence on the firm's future performance.

In a word, increasing investments in new infrastructure are promoting the heavy truck industry's growth, further augmenting Weichai Power's sales volumes and innovation. Benefitting from its latest products, the firm's operating income is expected to grow massively in the next three years, from 2020's CNY 187.78 billion to 2022's CNY 210.75 billion. 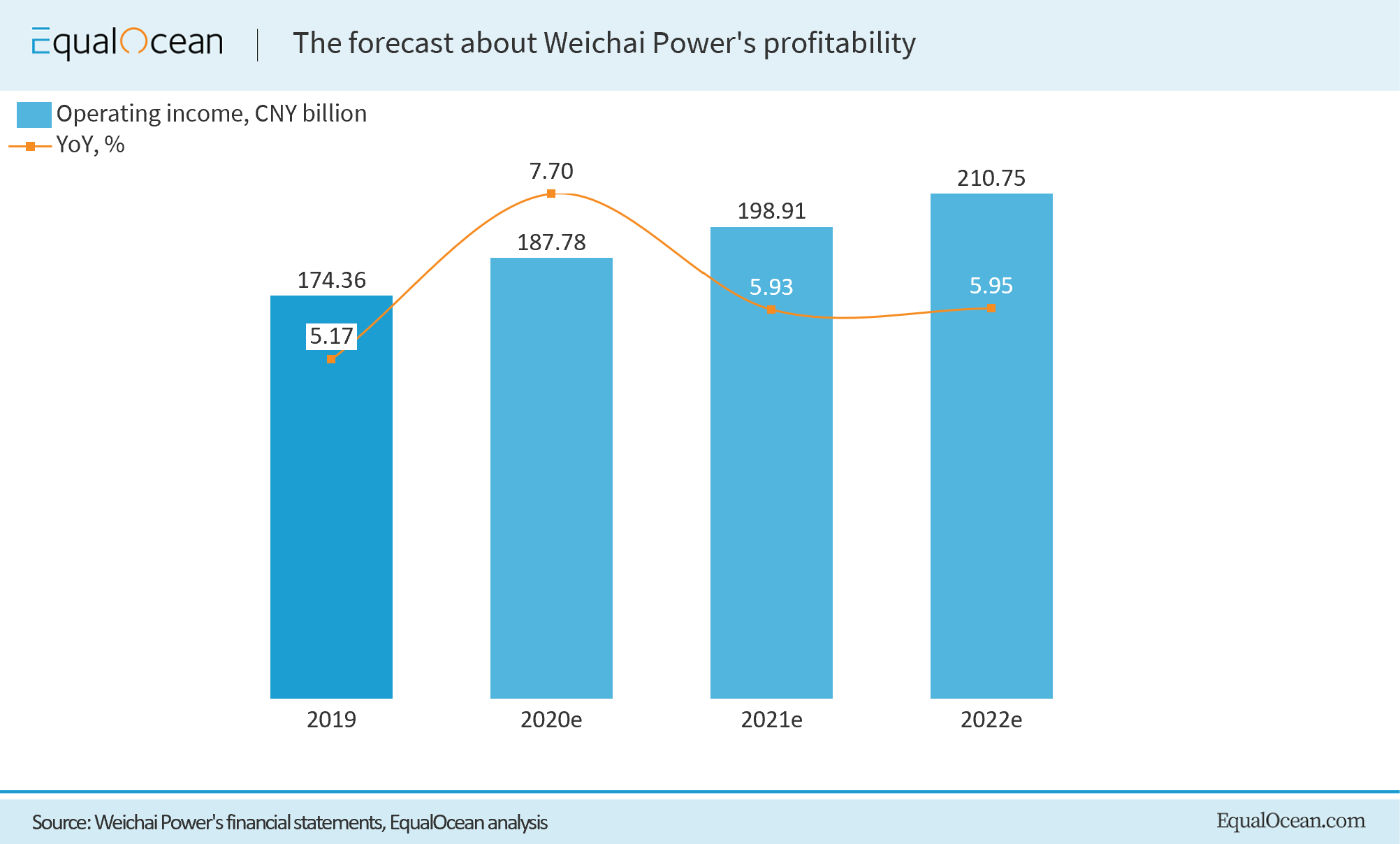