Beike, China's Combo of Zillow and MLS, Is Valued High

While the New York-listed housing platform operator enjoys a high valuation, investors should be alert to risks behind. 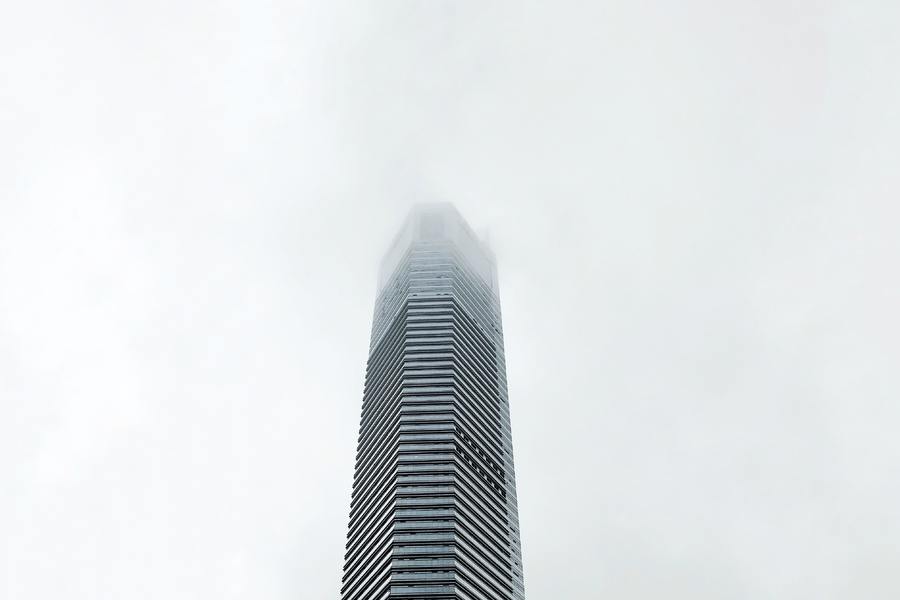 We believe that Beike is likely to maintain strong growth with an expanding Agent Cooperation Network (ACN) but its stock price is currently overpriced, compared to that of its major Chinese counterparts. The overall performance of the Local Real Estate (RE) market will put limitations on Beike's market performance.

The growing market is yet to reach maturity

Founded in 2001, Beike's precedent was Lianjia, an offline RE brokerage chain in China and now a sub-business under Beike. The company's development can more-or-less be seen to reflect China's 'commercialized housing' development. (Before China's Reform and Opening-up, residential housing resources were not tradable when they were owned by the country; commercialized housing refers to tradable residential properties here, which differs from commercial buildings.) According to the latest data, over 1,715 sq km of commercialized housing space was sold in 2019 countrywide. The transaction area maintained a 7% CAGR in 2009 – 2018 and, in the near future, the uptrend will remain with smaller acceleration under the maturing RE regulation system and the government's intention to pin on RE bubbles.

Chinese RE brokerage business was upgraded along with the dot-com boom and the rise of the mobile Internet. Lianjia was previous a RE brokerage partner at 58.com (WUBA:NYSE), a craigslist-like site in China. The brokerage chain gradually became independent from 58.com and incubated an open platform based on its decade-long experience and understanding of the RE brokerage business, which became the later Beike Housing.

From planned to the market economy, China's RE development history is shorter than that of developed countries, and hence the development of the brokerage system that resides on the maturity of the RE industry has been slower. RE brokerages, however, are essential when the RE market grows to a certain level, with millions of buyers and sellers making deals at the same time. In China, Beike is among the pioneers in the space. Unlike 58.com, Lianjia is more than a RE information system but also a transaction platform for all RE chain brokers in China.

In the United States, MLS systems offer a collaborative environment for RE brokers to make deals and it is a proven business model in the RE industry. In China, the answer to MLS is Beike's ACN, which was spun off from Lianjia's decades RE brokerage business. Adding on 'Housing Dictionary,' Beike is a mix of Zillow (ZG:NASDAQ) and MLS companies: house buyers check housing information and brokers complete deals in one place. A few years ago, everyone had a chance to launch a similar business, but the first-mover advantage and technological prowess made Beike the biggest player in the game.

Building the ACN is time-consuming and the older the ACN, the more powerful and irreplaceable it is in the industry, with more users and more authentic listing property information. At the moment, Beike's ACN has no matched competitors in China. In China's largest cities, such as Beijing, Shanghai, Guangzhou and Shenzhen, urban development has reached certain limits in terms of housing resources, making second-hand property transactions grow faster. In lower-tier cities, the RE market is rather a blue ocean and a second-hand RE market of significant size is years away.

From the cost of sales breakdown, the change of 'commission – split' grew drastically, increasing from 6% in 2018 to 44% in 1Q-3Q 2020. The increasing expenses were boosted by the growth of external RE brokerage partners. At the end of 3Q 2020, there were over 447,000 RE brokers using Beike, an increase of 174.2% compared to the same quarter in 2018. Meanwhile, the number of RE brokerage brands increased from 116 in 2018 to 273 in 3Q 2020. The developing dealer side reflects on Beike's revenue and cost of revenue during the platform's expansion.

An enabler of the Chinese digital RE brokerage industry, Beike has a certain premium in the capital market. The business is currently valued at rather high multiples, compared to its local competitors like Fangdd, 5I5J and WorldUnion. 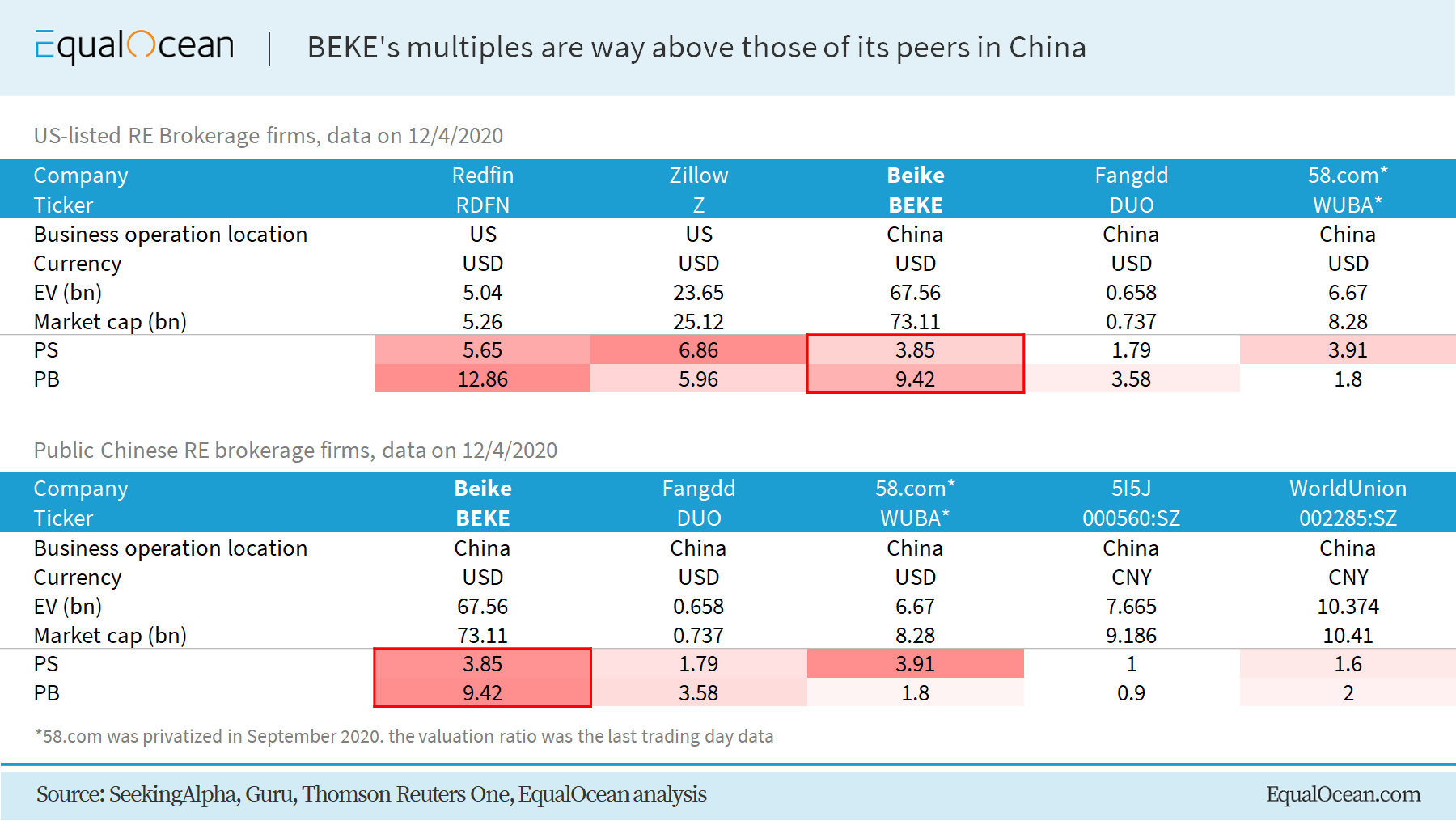 In the US, BEKE is often compared with similar assets like Zillow and Redfin. Zillow and Beike are too young to show meaningful PE ratios, so we compare these companies' PS and PB instead. Zillow is at a relatively high PS compared with other RE business firms; Beike is in the middle, but its valuation ratios are the highest among its Chinese peers. It is more proper to compare Beike with its Chinese peers as they compete in the same RE market.

RE brokerage is not matured enough. The industry standard is yet to form. In a burgeoning market, opportunities are too many and juicy meat attracts flies. For instance, some RE brokers who violate professional ethics give heavy strikes on newly-built trust from customers.

Beike's efforts on 'housing dictionary' and ACN are leading the standard, which helps to build RE brokerage's reputation. Marketing the concept of a 'digital brokerage,' Beike is popular among tech-savvy investors. As a result, it is enjoying a relatively high valuation. Yet, Beike is not the only transformation leader: 58.com and WorldUnion are developing quite a few technology-driven models, too – but the market is seemingly yet to realize this.

RE brokerage is a low-frequency business when buying a house costs much more than buying a cake and the one-time fraud consequence is more severe than it in other businesses. For a long time, China's emerging RE brokerage suffered from a damaged reputation. In the meantime, the soil is not fertilized enough for RE brokerage to sprout.

Among new property sales in China, brokers do not have much strong bargaining power when many property developers have their own channels to sell new buildings. A prosperous second-handed RE property market is critical to brokers and the industry's performance in the secondary market. China's second-hand property market has been growing from the top-tier cities to surrounding areas, but the size is yet to inspire stock performance. Except for top-tier cities, second-handed RE property sales are yet to bloom in lower-tier cities and brokers are waiting for the time to come.

The US is considering approving a stock exchange reform that may prevent Chinese companies from being listed in the US. Beike employs the VIE structure and, if the new regulation is approved, it may face a risk of being delisted from the US bourse.

Beike is an RE brokerage reform leader and standard builder, but not it is overpriced given the overall market performance. Beike has the potential to reach Zillow or Redfin's valuation ratios only when China's RE brokerage industry is as developed as the United States', or it will be always limited by the ceiling of the industry. Now is not the best timing to hold the stake – buy at the dip. Investors should also be concerned about market regulation risk: Beike is a Chinese firm listed on the US bourse.