3Q Result: Solid Growth in the Entire Ping An Ecosystem

During the first three quarters of 2020, Ping An Group achieved a year-over-year increase of 4.5% in operating profit. 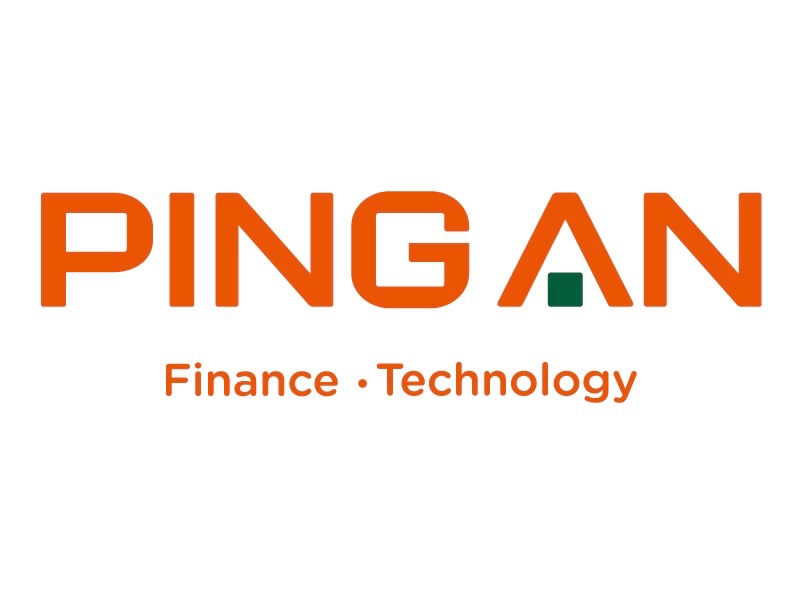 ►The transformation in the life and health insurance sector hasn’t yet generated great value.

►The property insurance business is on the right track in terms of recovering from the pandemic.

►Ping An Bank's operation results and set quality have been improving.

Financial performances during the latest quarter of Ping An ecosystem have been released. As it thinks there are certain items experiencing large fluctuations in short term, Ping An focuses more on the operating income. During the nine-month period, the figure ran up 4.5% even under the pandemic. The retail customer amount increased by 7% compared to the end of 2019, and 2.5% year-over-year in the third quarter. The financing amount and insurance premium scale for business clients both surged over 100% in the three months. 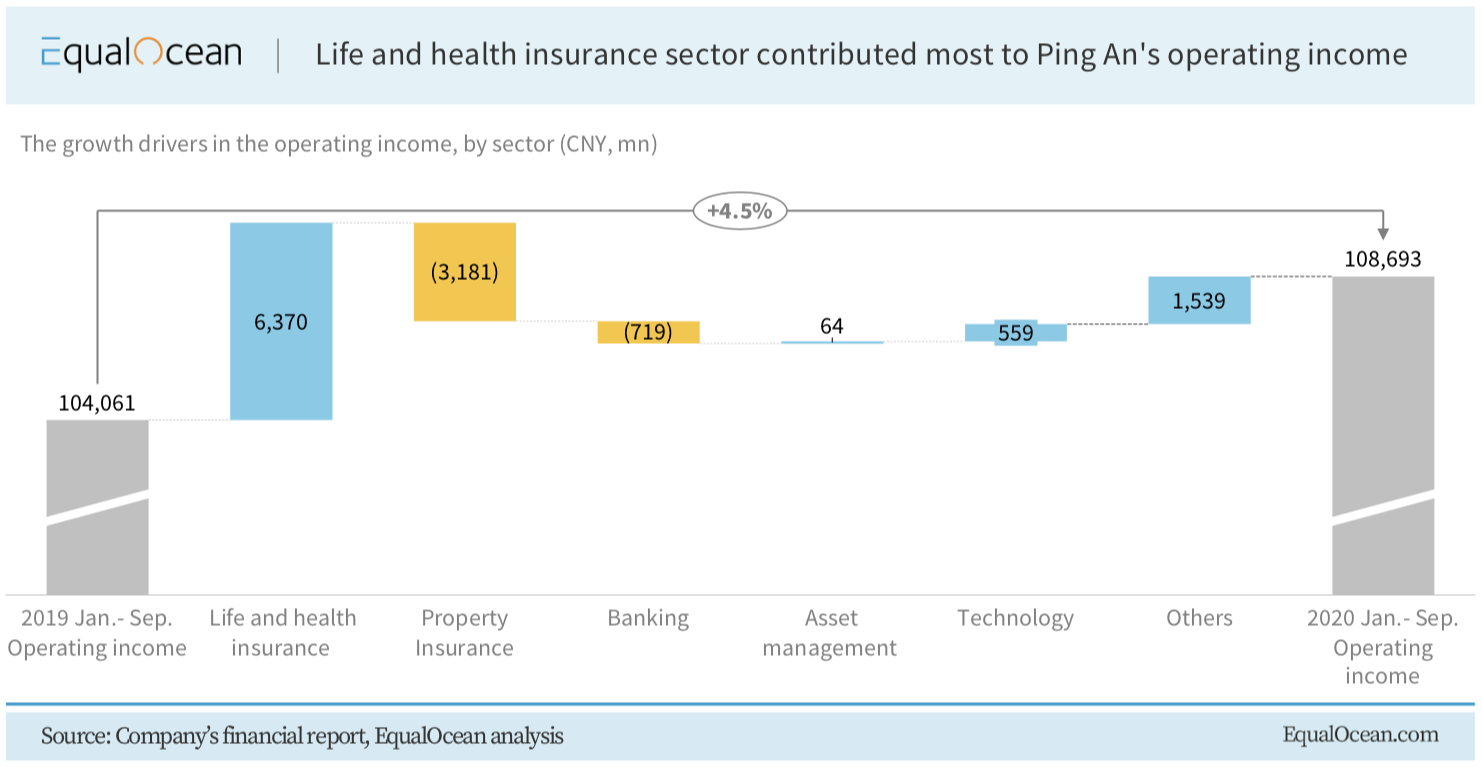 As a financial conglomerate originating from the insurance business, life and health insurance contributed most to the improvement in operating income. Due to the increasing cost ratio, property insurance has suffered a loss.

Insurance sector: Overall good but the transformation is still ongoing

In the third quarter, the life and health insurance sector achieved a 9.2% increase in the operating income, while the net income declined by 25% because of the pandemic, which speeded up the transformation on the sector, from a positive perspective. Ping An upgraded the sector from five ways including channels, products, operation, model, and culture, to form competitiveness from a long-term perspective. The online operation has been expanding as expected but the offline channel still remains inactive that caused the new business valued to 27.1% down. Many experts in the industry believe that the new operation will bring something in 2021. 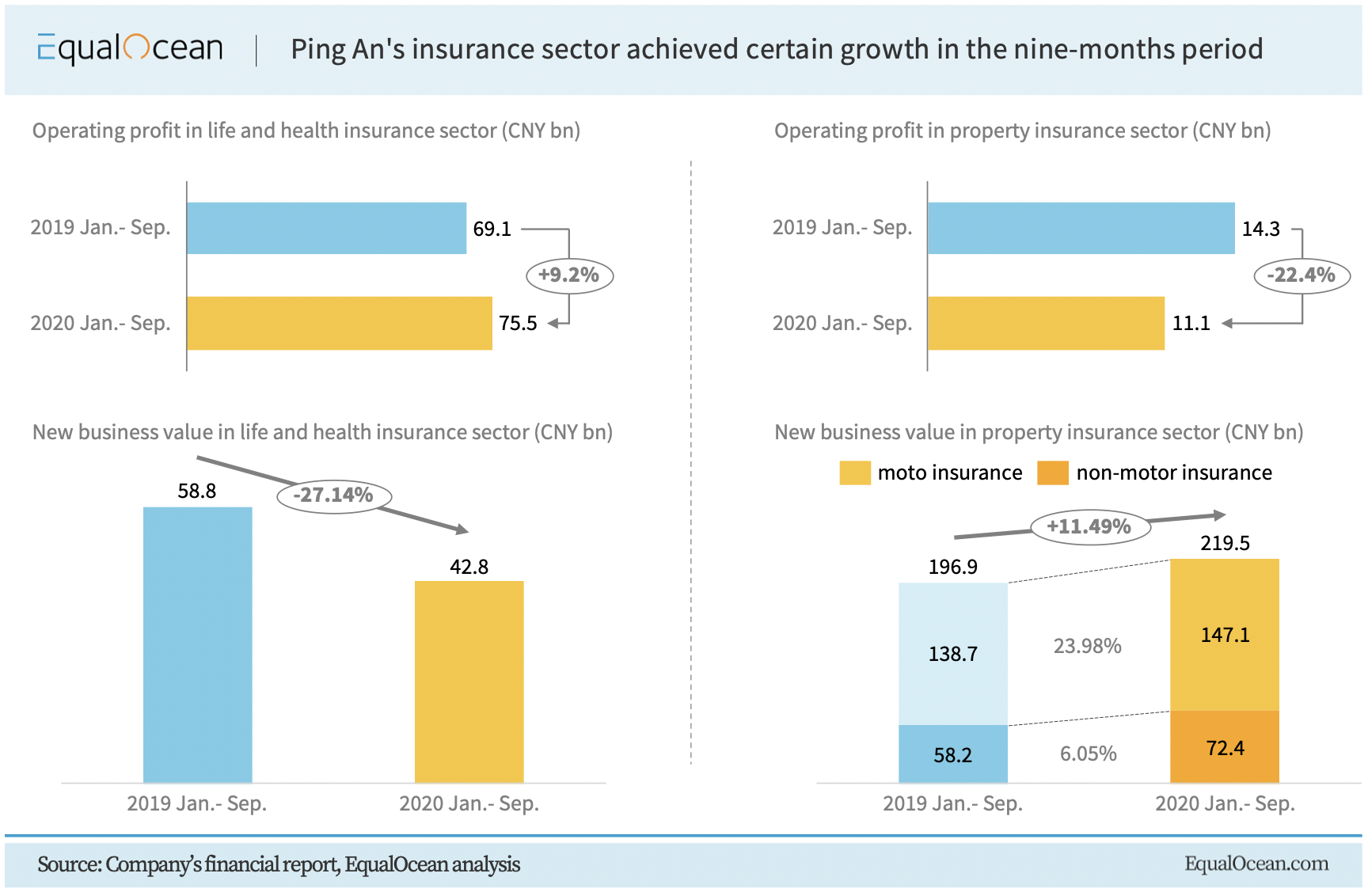 The property insurance reported an 11.5% rise in premium amounts even under the pandemic. However, due to the increasing competition in the market, the comprehensive cost ratio ran up 1% to 99.1% at the end of September, the operating profit in the sector drop by 22.4%, according to the company. Ping An will continue to impose stricter risk management and clients controlling to solve the problem.

The investment portfolio in the insurance has been improving as the scale expanded 10.3% during the nine-month period and the annual investment return recorded 5.2%.

Ping An Bank, one of the star banking stocks in China's A-share market, gradually recovered from the pandemic. During the first three quarters, the revenue grew up by 13.2% year-over-year to CNY 116.56 billion.

By end of September, the asset under management (AUM) surged 25.5% and the number of retail clients ran up 6.8%, compared to the inception of 2020. The coverage ratio, which represents the capability for banks in shielding against credit risks, enhanced by 35.17% to 218.29%. 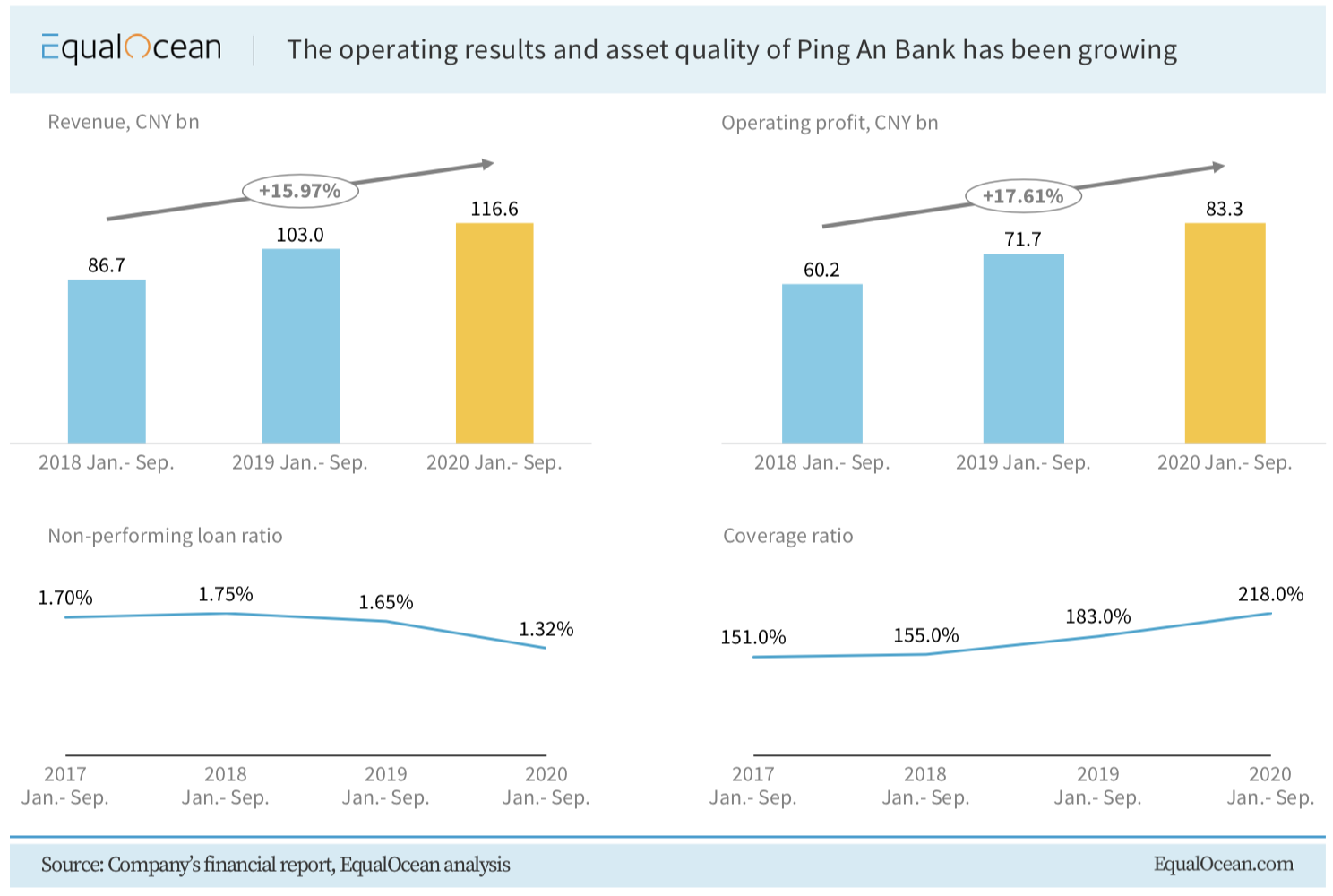 It identifies the risks and economic trends in a predictive way, increases the standards for impairment losses on the credit and lending assets to ensure a securer operation, which partially negatively affected its operating profit. The credit and other asset impairment losses were exalted 32.4% and 55.6%, respectively.

Adversely affected by the COVID-19, the growth of Ping An Bank's net income had been decreasing for quarters, but the figures are narrowed. Based on the encouraging trend and the regurgitation from the high impairment losses wrote down, the profitability growth for the entire 2020 is expected to turn positive.

However, it is worth mentioning that the operating income rose 16.2% before the impairment losses, and the net income reached a historical high in the single quarter with a year-over-year increase of 6.11%.

Technology has now become one of the main development goals for Ping An ecosystem. The revenue from the technology sector reported 8.3% higher during the first three quarters compared to the same period last year. Fintech and health-tech constitute two primary segments.

Once the top four unicorns worldwide and the first-born fintech company for Ping An, Lufax is indeed the apple of the latter's eye, and has become one of the largest personal financial platforms in China now. By end of September 2020, the AUM rose by 9.1% and the loan balance ran up by 15.9% from the inception of the year. The loan overdue rates also had gone back down to where they were before the pandemic. On October 30 of 2020, Lufax successfully launched New York Stock Exchange under the ticker of 'LU', became the second US-listed Ping An-incubated fintech firm, after OneConnect (OCFT:NYSE).

OneConnect, the other fintech arm for Ping An ecosystem, serves as the main technology output for financial companies. Its services have covered over 3700 financial institutions in 18 countries and regions. During the third quarter of 2020, the company reported revenue of CNY 881 million with an increase of 50.6%, and a 10.62% improvement on the gross profit margin, from 38.6% to 42.7%.

By end of September, the number of technology-related patent applications reached 28037 with the fintech-related ones ranked first globally in two consecutive years. 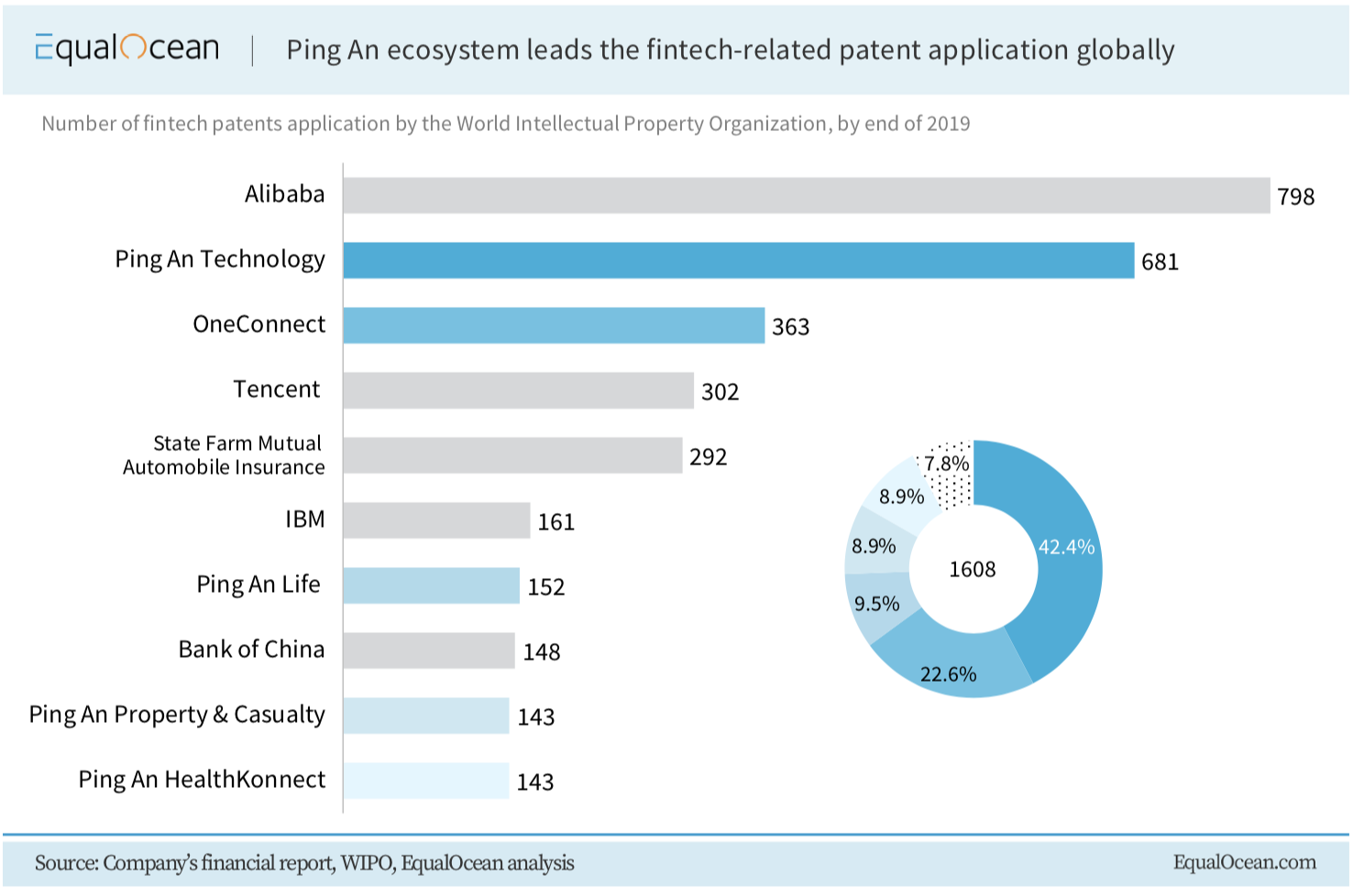 In the health-tech field, Ping An Good Doctor (01833:HK) has applied AI technologies to improve services. It hasn't yet released the financial result for the third quarter of 2020. Ping An HealthKonnect, a technology company provides comprehensive health insurance-related solutions for the medical insurance bureau and insurance firms. By end of September, it has secured the bids in nine provinces in medical insurance platforms construction.

After decades of development, Ping An Group is now one of the largest financial conglomerate in China that operates in almost all fields in the financial service industry, and also actively exploring more fields out of it. Even it has a large exposure to the COVID-19 pandemic, Ping An's performances showed its power. We are looking forward to seeing its final grade for the entire 2020.

CONTACT US
Scan QR code to contact us for professional consulting services
Next article
zhaogang.com: An ‘Iron Man’ Driven by a Four Trillion Stimulus Plan