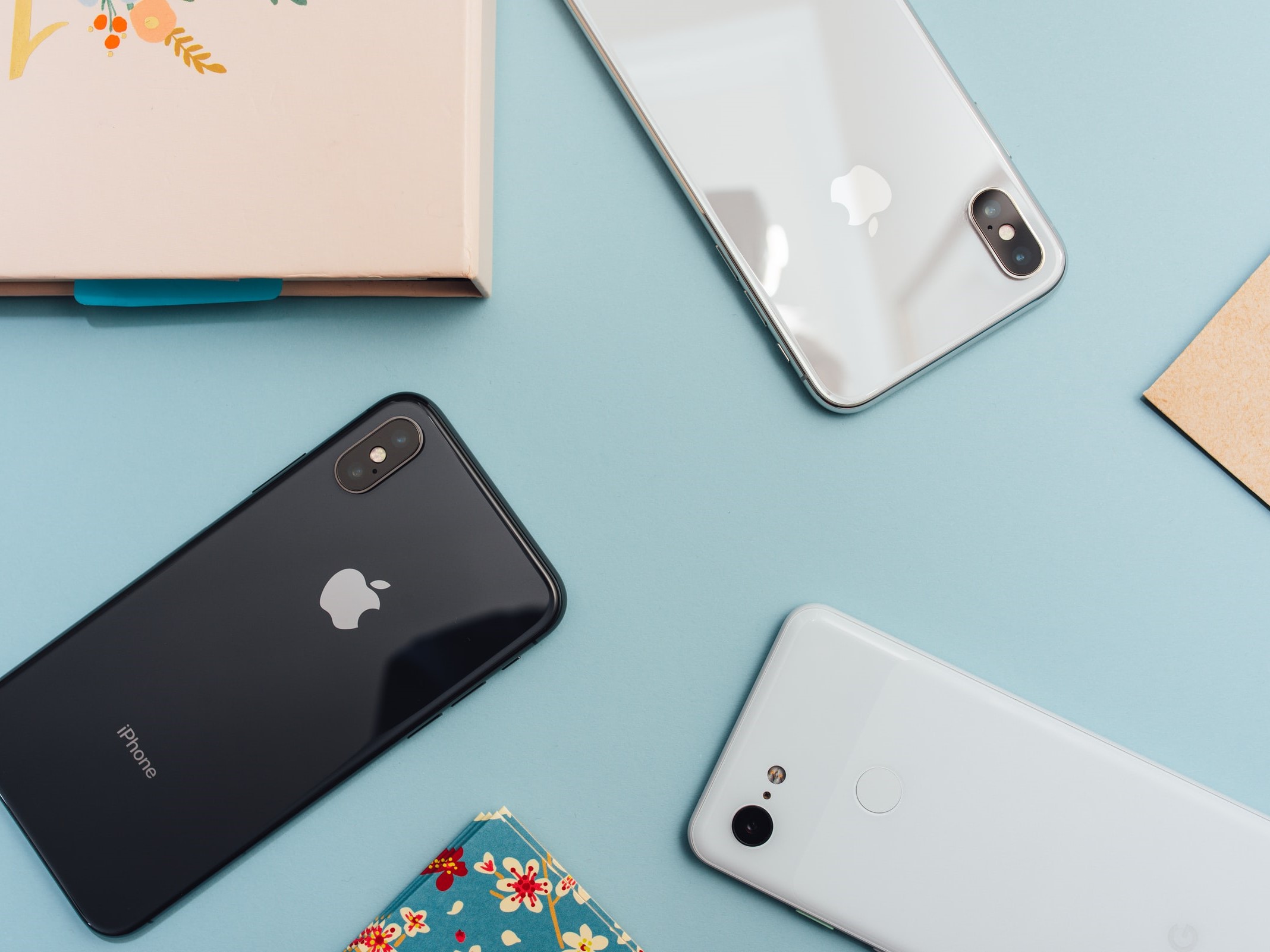 On October 13, 2020, Apple launched its new iPhone 12 lineup, which includes iPhone 12 mini, iPhone 12 and iPhone 12 Pro series. The upgrades of these products include more advanced System-on-a-Chips, cameras and screens. It also introduced 5G cellular, MagSafe and Lidar features. Visually, the latest smartphones returned to a flat-edged design similar to the iPhone 5.

As the booking began, the e-commercial data showed the customers' enthusiasm for the new small gadgets. According to CICC, on the JD.com platform, the booking volume of iPhone 12 is around 31% higher than that of the last years' iPhone 11 in China. Instead, Apple's Chinese official website displayed buyers need to wait 3 or 4 weeks to unbox the new devices, which is also longer than historical levels. In the US, there is a 1-to-4-week gap between the order and dispatch of the iPhone 12 and iPhone 12 Pro.

New Apple products are expected to stimulate the company's sales and related products than the previous generation portfolio.

► Among the positive factors:

1. It's the right time for the iPhone 6 series customers, who are the most numerous iPhone users, to replace their old devices. With the better power of products like we mentioned above, Apple can lure 6 and 6s customers to purchase the new generation iPhones. 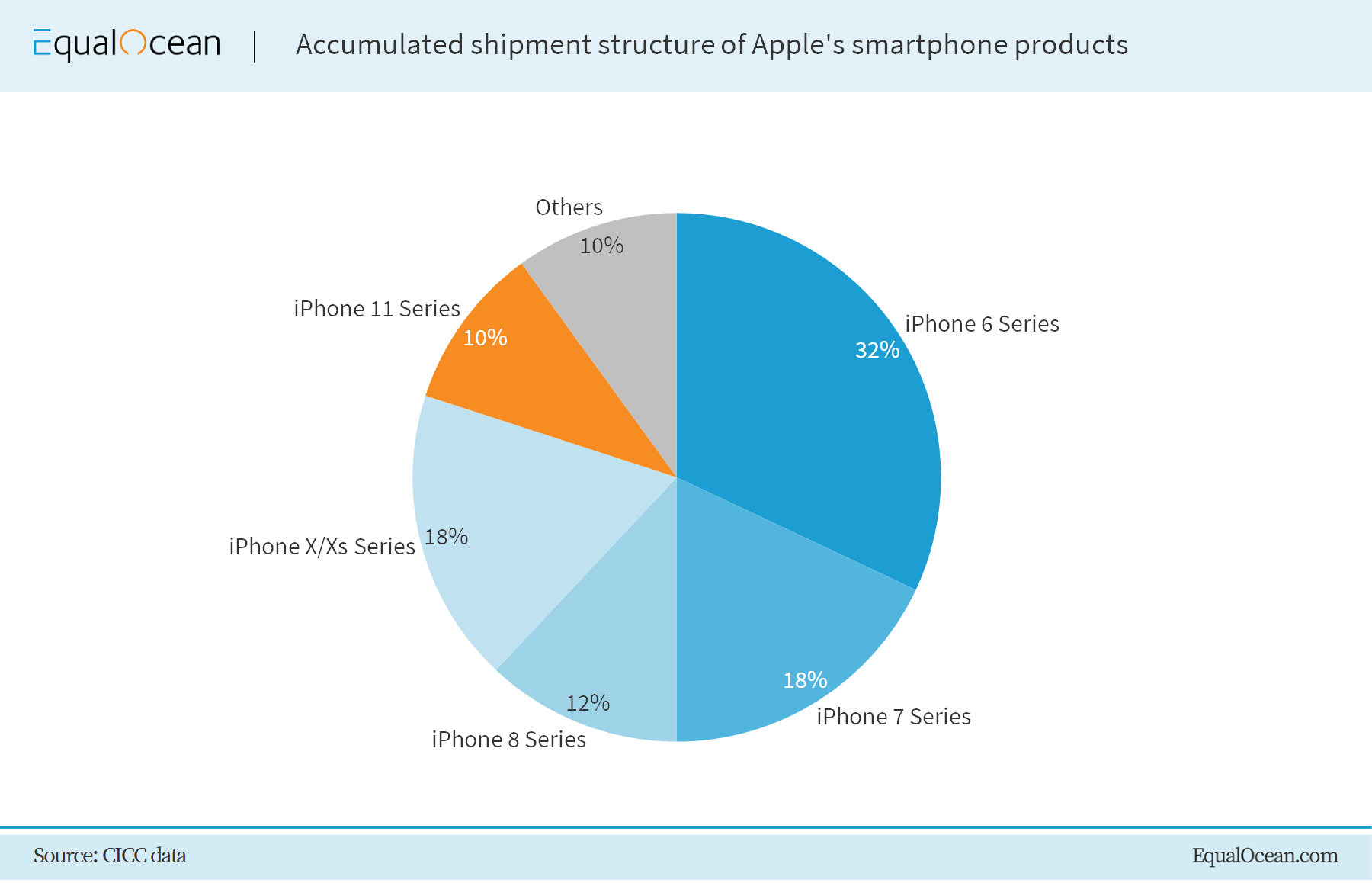 3. MagSafe may be massively applied in many cases, such as wireless charger and card bag, which is a catalyst for the tech giant's ecosystem.

4. Regular advances on chips and cameras, hand feeling and the adoption of a new border and 5G feature will spur the desire to shop the device.

► In the pandemic period, people having been using electronics heavily and attach importance to their small screens. Thus, many are choosing to upgrade their devices to get better experiences. 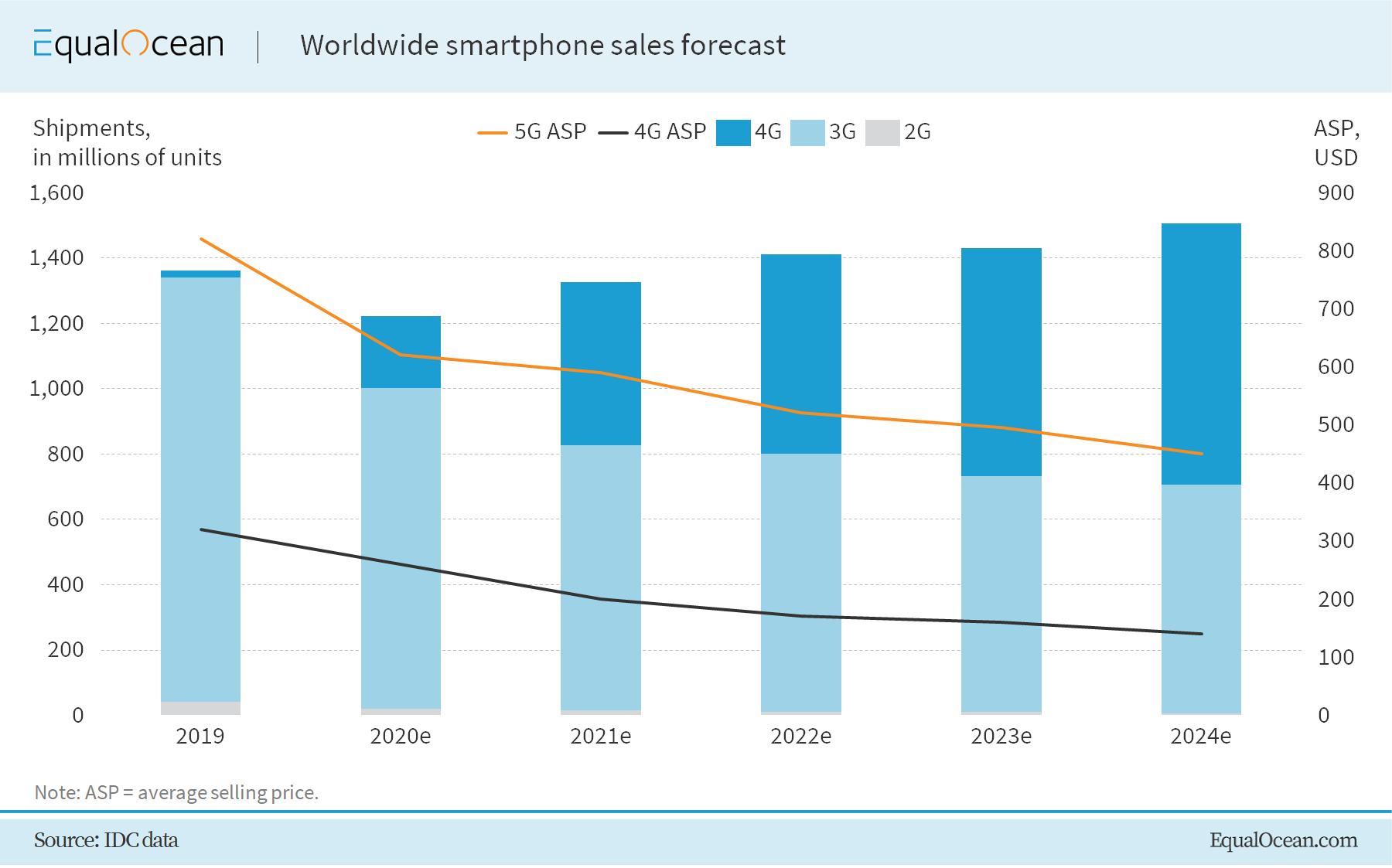 ► The Huawei ban will transfer part of its market share to its competitors like Xiaomi and Apple. Many customers will opt for other cellphones if Huawei-designed smartphones have no access to the latest Android systems and Qualcomm's Snapdragon chips. Apple can earn from Huawei's high-end smartphone market loss.

Who are the beneficiaries of the strong sales of the iPhone?

If the product sales boom as the reservation figures predict, many of Apple's upstream companies and their stocks will be direct beneficiaries. Based on CICC's research, 12 companies listed on China mainland, generating from 30% to 80% of total revenues from manufacturing Apple's small gadgets. Most of these companies' toplines are expected to keep growing at over 20% in the 2021 fiscal year. 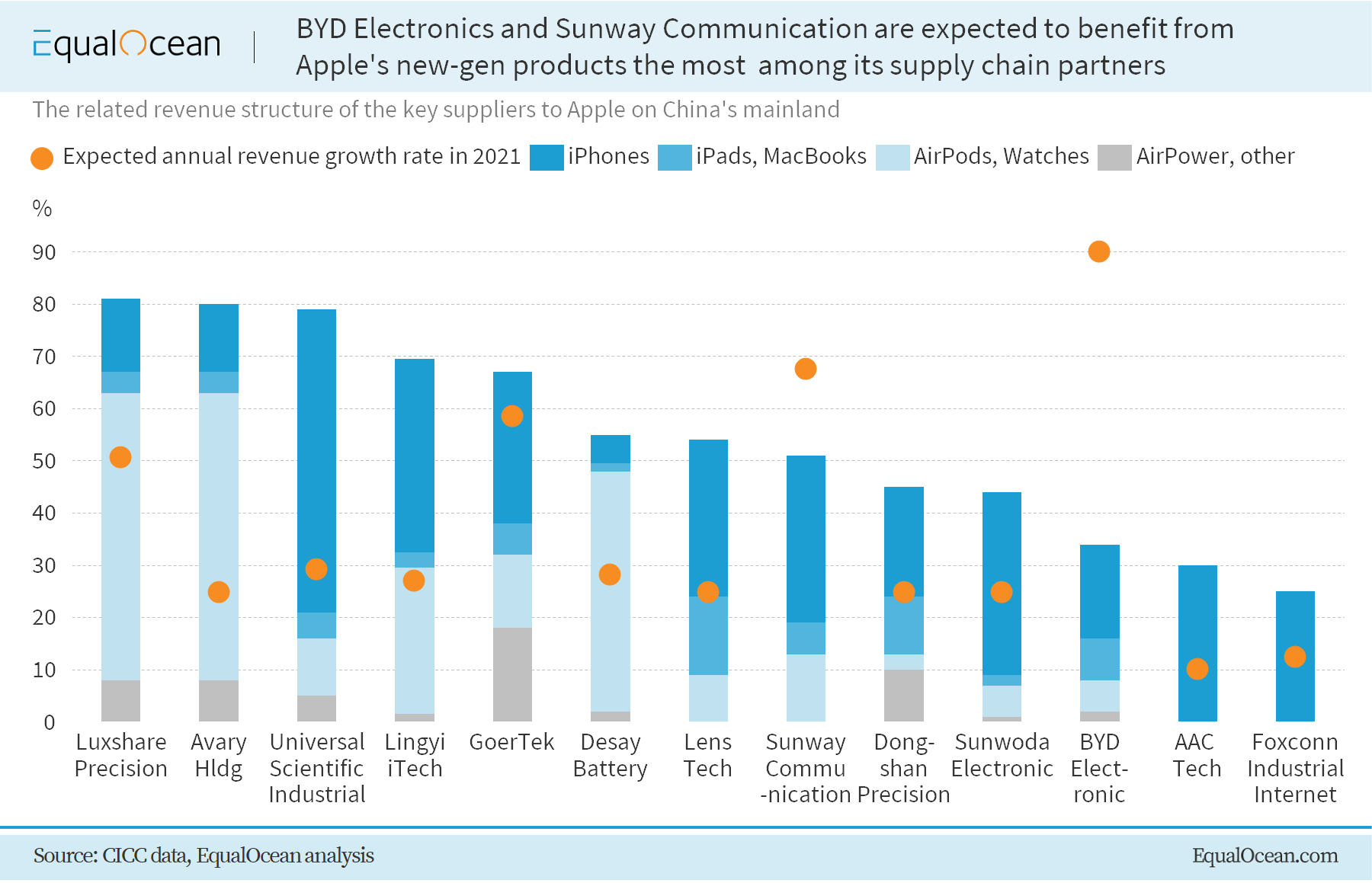 Is it the right time to long these stocks?

Among these thirteen stocks, we find some mispricing opportunities on four names: Dongshan Precision (002384:SZ), Foxconn Industrial Internet (601138:SH), Lingyi iTech (002600:SZ) and Lens Technology (300433:SZ). These stocks imply undervalued forward one year PE ratios, which are lower than the two-year historical mean of PE ratios. Besides, Dongshan Precision and Foxconn have been declining materially in recent three months. The two names may give the best bouncing back returns. 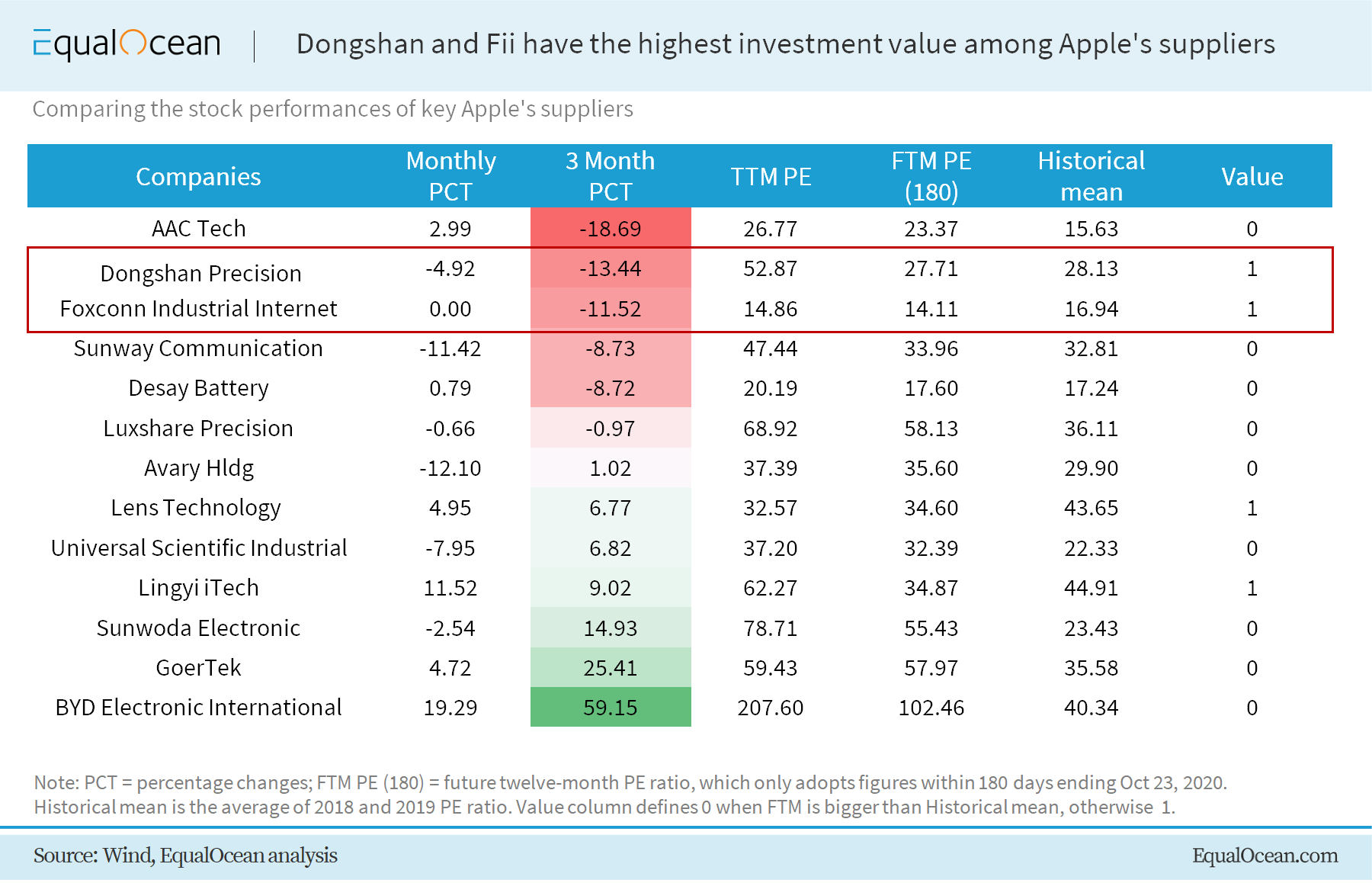 Introduction to the four companies

Dongshan Precision: the company was incorporated in 1998 and the largest Chinese company engaged in the research and development, manufacture and distribution of precision metal products and precision electronic products based on revenue size. Its primary products include a printed circuit board, touch panel and liquid crystal display module, light-emitting diode. The firm generated CNY 13.4 billion, CNY 19.8 billion and CNY 23.5 billion revenue in 2017, 2018 and 2019 with CNY 530 million, CNY 811 million and CNY 706 million in net income over the same period, respectively. Dongshan manufactures Flexible Printed Circuits for Apple, Huawei, Oppo, Vivo and Xiaomi. It is also an authenticated supplier of Tesla.

Lens Technology: the company was founded in 2006, produces touch panel cover glass, touch sensor modules, and touch panel covers. Lens generated CNY 23.7 billion, 27.7 billion and 30.3 billion revenue in 2017, 2018 and 2019 with CNY 2.0 billion, 0.6 billion and 2.4 billion net income over the same period. The company cooperates with Apple, Samsung, Huawei and other smartphone brands. Around 50% of its total 2019 revenue from supplying to Apple.