BYD – All About Getting the Basics Right

BYD has seen growth in many fronts, but the conglomerate model is still to be tested... 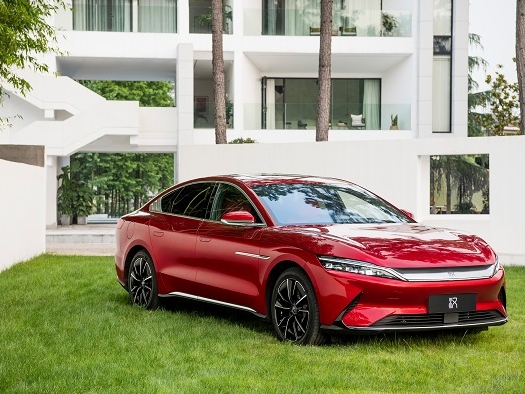 BYD (BYD: HKG 1211) is a Chinese Conglomerate that primarily operates in automotive, batteries, and handset manufacturing and sales, and it also has business activities within transportation and construction. It is listed in both the Hong Kong exchange and Shenzhen exchange, trading at HKD 103.8 and CNY 106.68 respectively. With electric vehicles' rise in popularity in recent years, BYD's strong presence in both EV parts and whole EV sales have brought the company into the center stage. However, with sales growth stagnating in the past year, the true value of BYD has become the subject of controversy.

Based on our analysis of BYD, we see the decline in its auto sales as a short-term countercyclical decline due to COVID-19 and intensified competition. In the long term, we think BYD’s comprehensive technology and vertical integration strategies, the results of years of knowledge and technical accumulations, will set it up as a dominant leader in all streams of the EV manufacturing process. Its solid consumer electronic business will also serve as strong protection for BYD.

In the short term, we think that BYD’s sales will not experience large falls because of strong demand in its PHEV vehicles and some of its ICE models. From January 2020 to August, five BYD PHEV and EV models were ranked in the top 20 EV sales by volume in China. BYD's ICE SUV Song Pro and Song also gained strong traction and recorded 93,271 units sold until August 2020, a ~70% YoY sales increase compared to its most popular SUV model from 2019. 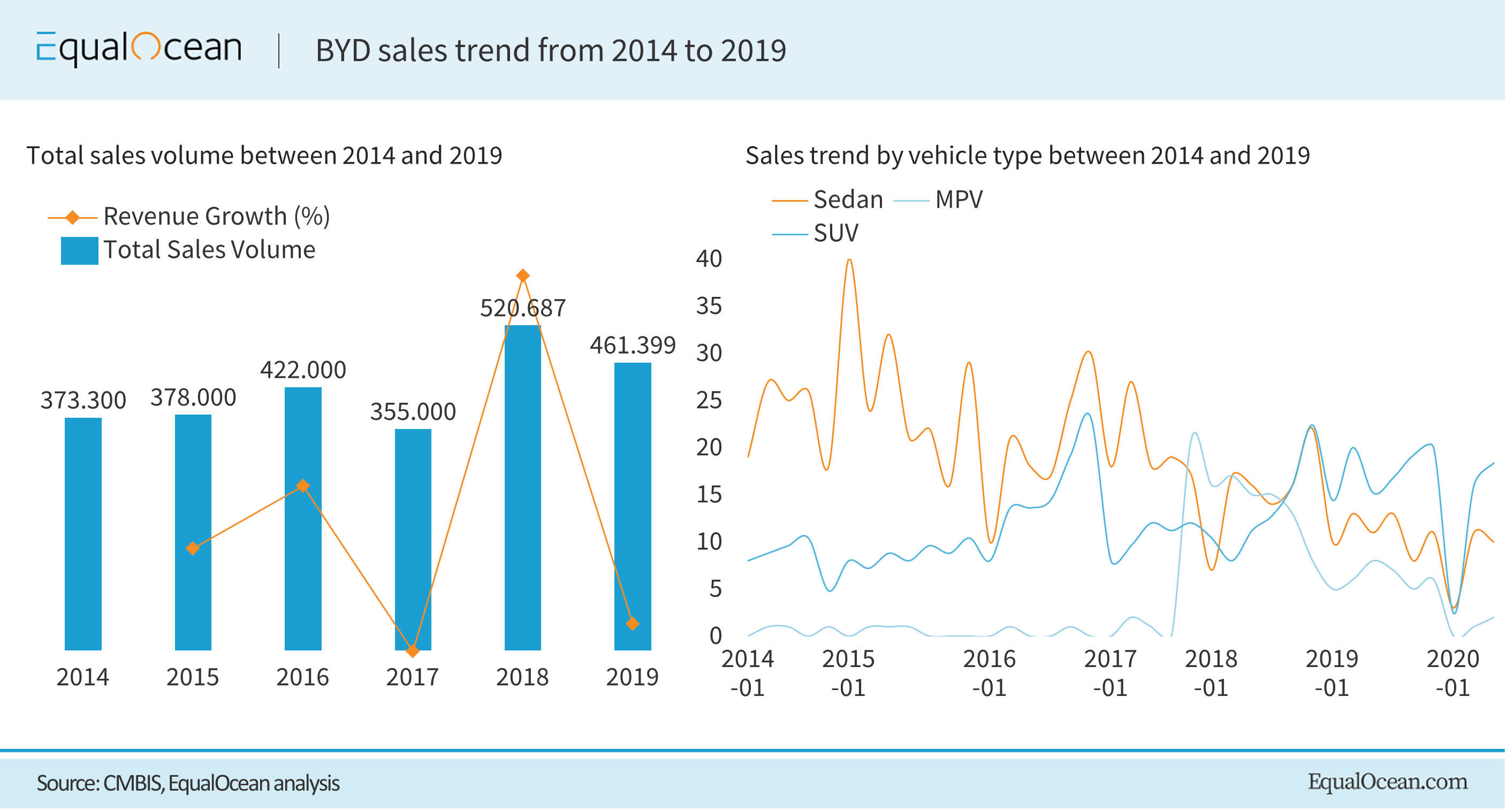 In about 3-5 years, in our opinion, these aforementioned advantages of ICE will start to grow less significant. As IHS Markit projected, the number of EVs in China will grow from 0.8 million units from 2019 to 4.2 million by 2025. We anticipate that economy of scale and more charging station coverage will accompany this high sales growth. So, in the medium term, the race will rely less on ICE sales, but more on the competitiveness of EVs. In this timeframe, we see BYD’s vertical integration can power it to ride on top of the competition.

Through analyzing the success of Model 3 sales in China, we found out that branding and competitive pricing are two crucial factors. Each spike in Model 3 sales was driven by price-cutting activities, which was made possible by its cost control ability. Although the increase in quality in Chinese EV brands can eliminate some branding effects, we think a low price for quality features will still be a deciding driver for purchasing decisions. Among domestic manufacturers, BYD is one of the few that controls all manufacturing stages.

As we will take a deeper dive into the next section, BYD's strong cost control ability is a result of its vertical integration – undertaking all process of manufacturing from the raw material collection to whole vehicle delivery, which was made possible through many years of R&D.

In the long run, we think that BYD’s technological prowess will bring it an even higher economy of scale and possibly expand its sources of revenue. In March 2020, BYD unveiled its newly developed blade battery. Different from the mainstream NCM battery that CATL produces, the 'blade battery' is an LFP battery, which is safer and has a longer lifespan. The short-range of traditional LFP batteries against NCM was also overcome by BYD research. So, now the blade battery and NCM battery provide the same range support to EV. In terms of cost, the blade battery also saves 20-30% compared to NCM batteries. 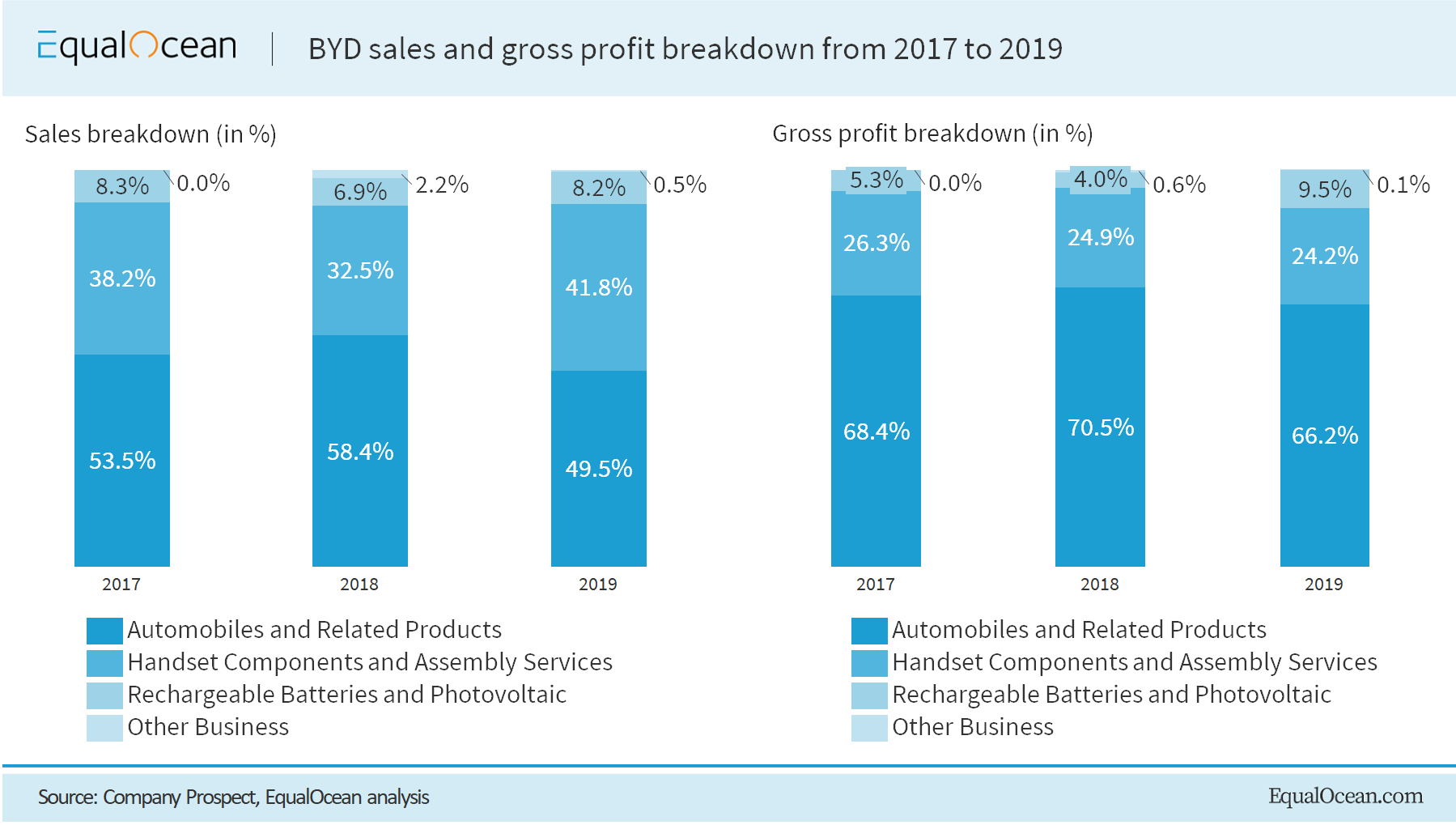 As of now, BYD’s blade battery production capacity is ~ equipping 180k units of vehicle. According to CMB International’s research, BYD will further ramp up its blade battery production this year and aim to sell them to external clients in addition to equipping all its vehicles with it in early 2021. BYD spent more than 10 years researching the LFP battery and ultimately brought it to fruition; we think the technology behind the battery is hard for up and coming EV makers like NIO and Xpeng to achieve, and that BYD in the long run can: 1) further reduce the cost of its EV relative to competitors and 2) generate revenue streams from the battery market in addition to the car market.

In addition to battery technology, BYD’s core competency is further enhanced by its IGBT chip technology. The IGBT chip is an integral component in EV’s motor driver, and the second most costly component of an EV, accounts for about 5-10% of the total cost. BYD launched its IGBT chip research in 2005 and is now the second in IGBT module sales following the Japanese manufacturer Infineon. In the long run, BYD’s ownership of IGBT chip technology will further benefit its EV cost control and is expected to provide a significant competitive edge against other Chinese and foreign players who are unlikely to have mature IGBT chip self-manufacturing capabilities.

Bid on Clean Energy and Transportation Creates Room to Expand

BYD was founded as a battery manufacturer, and while the car business has become its highlight in recent years, its secondary battery business has been growing as well. In terms of batteries, BYD has control along the chain, from raw materials like mineral resources to downstream applications. In recent years, BYD has launched its solar power stations, energy storage power stations, etc, completing its whole solution package, encompassing both storages and applications.

In 2019, BYD’s rechargeable batteries and photovoltaics recorded revenue of CNY 10.5 billion, marking a 17.4% YoY growth. According to CMB International, the continued high growth in electrochemical energy storage demand, this segment of BYD’s business will continue to see a ~15% growth in 2020.

Cloud Rail is another segment of BYD’s business and is currently taking ~1% of BYD’s total revenue. Could Rail provides solutions to cities for their above-ground transportation. Compared to subway and traditional transportations. It has a flexible route layout and low construction cost.

Currently, Shenzhen and Chongqing, two of China’s major cities, are constructing cloud rail, and many other cities both domestically and internationally have expressed interest. We believe that cloud rail fits into the Chinese government’s guidance on public transportations, and if it receives positive feedback from Shenzhen and Chongqing, we might see exponential growth in the number of adoptions in other cities, and this will in turn generate high revenue growth for BYD.

Opportunities and Risks within the Conglomerate Model

BYD’s dedication to expanding its sources of revenue upon its core technology has been a key growth driver for its business. So far, we have observed an efficient dynamic among different segments of BYD's business. Going forward, we see that the battery technology and IGBT chip technology will continue to anchor BYD’s competitiveness in its various fields. However, as BYD continues to grow its conglomerate business model, heavily promoting one specific business can come at the expense of other businesses falling behind their competitors. So, it will be important to monitor BYD's change in company structures and the implications of these changes on company resource allocations in the future. 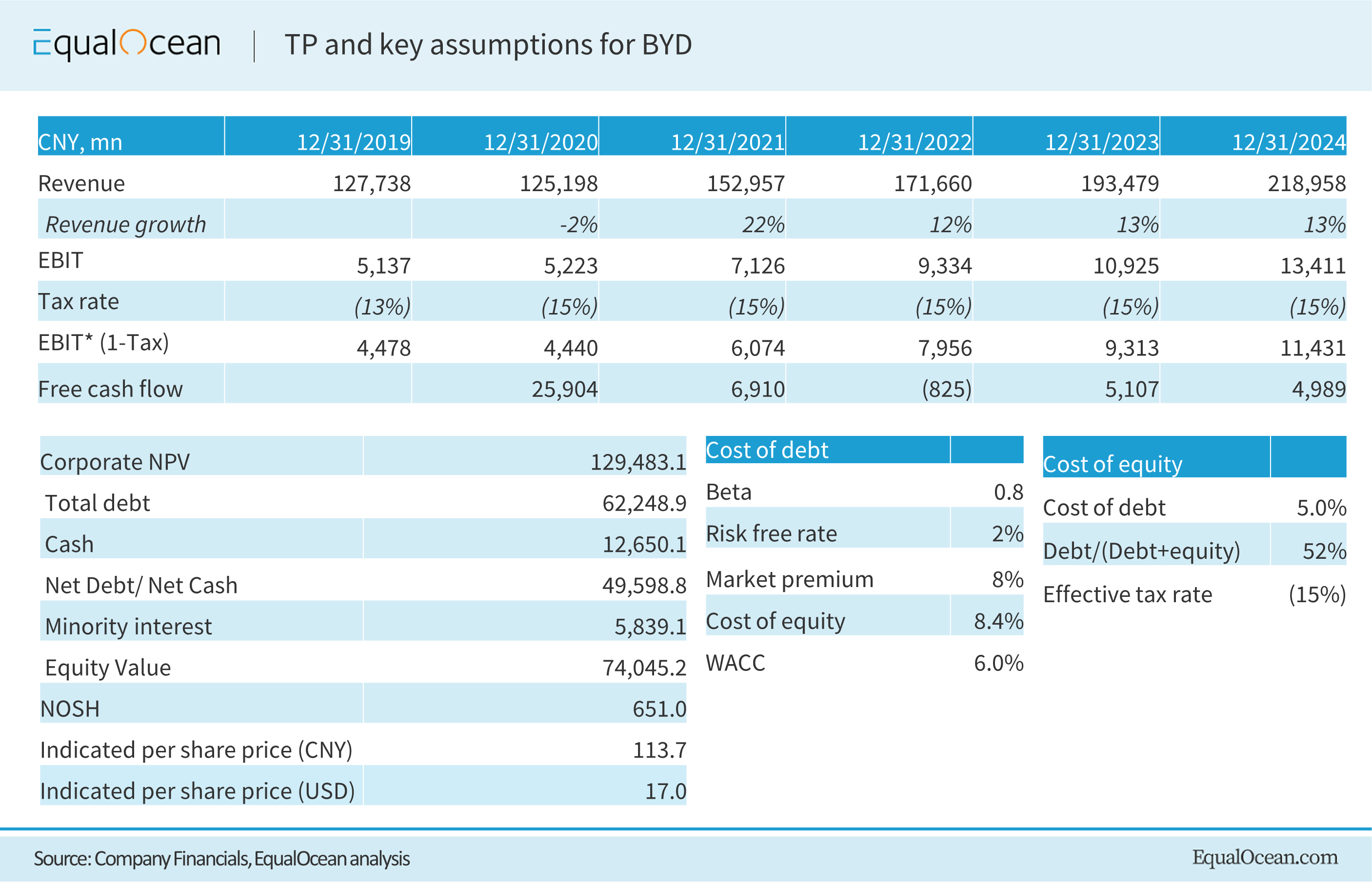 Still, the strategic fleet expansion to higher-end EVs can pose some uncertainties here, and we have reflected this concerns in the revenue model building by selecting gross margin in line with traditional lower to mid tier BYD models. We apply a 1.75% perpetual growth rate. Our bull case and bear case scenario valuations suggest a 31% upside and 18% downside, respectively.