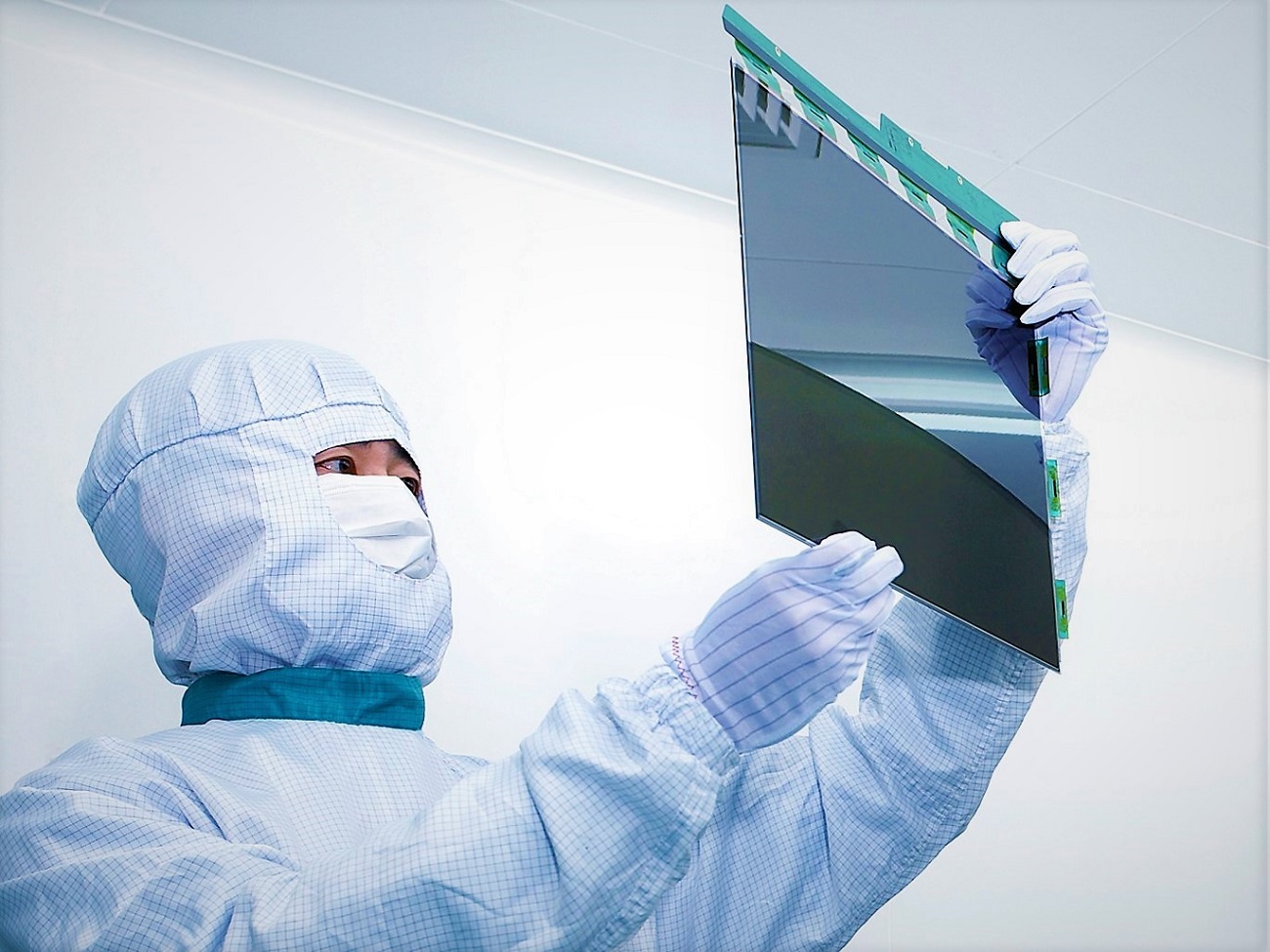 ► When the leading Korean players Samsung Display and LG Display exit LCD production, BOE will be the most significant player in the LCD market. Though OLED can replace the LCD, it will take years for it to be fully replaced.
► As foreign companies control evaporation material and machines, panel manufacturers seek a cheaper way to mass-produce OLED panels – inkjet printing.
► The transition from LCD to OLED will project huge costs to BOE and the short-term financials will be underperforming.
► Along with OLED technology's maturity, panel fabs can realize better cost control and expect stable growth.
► Panel fab's heavy input asks for a massive launching fund – not many can afford it. The industry will converge to a high concentration.
► 'The bigger the better' is no longer forever true when small screens take the stake.

From the early 1990s, LCDs appeared and replaced cathode-ray tube (CRT) screens, which enabled lighter and thinner display devices. Japanese electronics companies like JDI pioneered the panel technology upgrade while Samsung Display and LGD were nobodies in the field. Every technology upgrade or revolution is a chance for new players to disrupt the old paradigm.

The landscape was changed in 2001 when Korean players firstly made a breakthrough in the Gen 5 panel technology – the later the generation, the bigger the panel size. A large panel size allows display manufacturers to cut more display screens from one panel and create bigger-screen products. 'The bigger the better' is a motto for panel makers as the cost can be controlled better and they can offer bigger-size products to satisfy the burgeoning middle-class' needs. 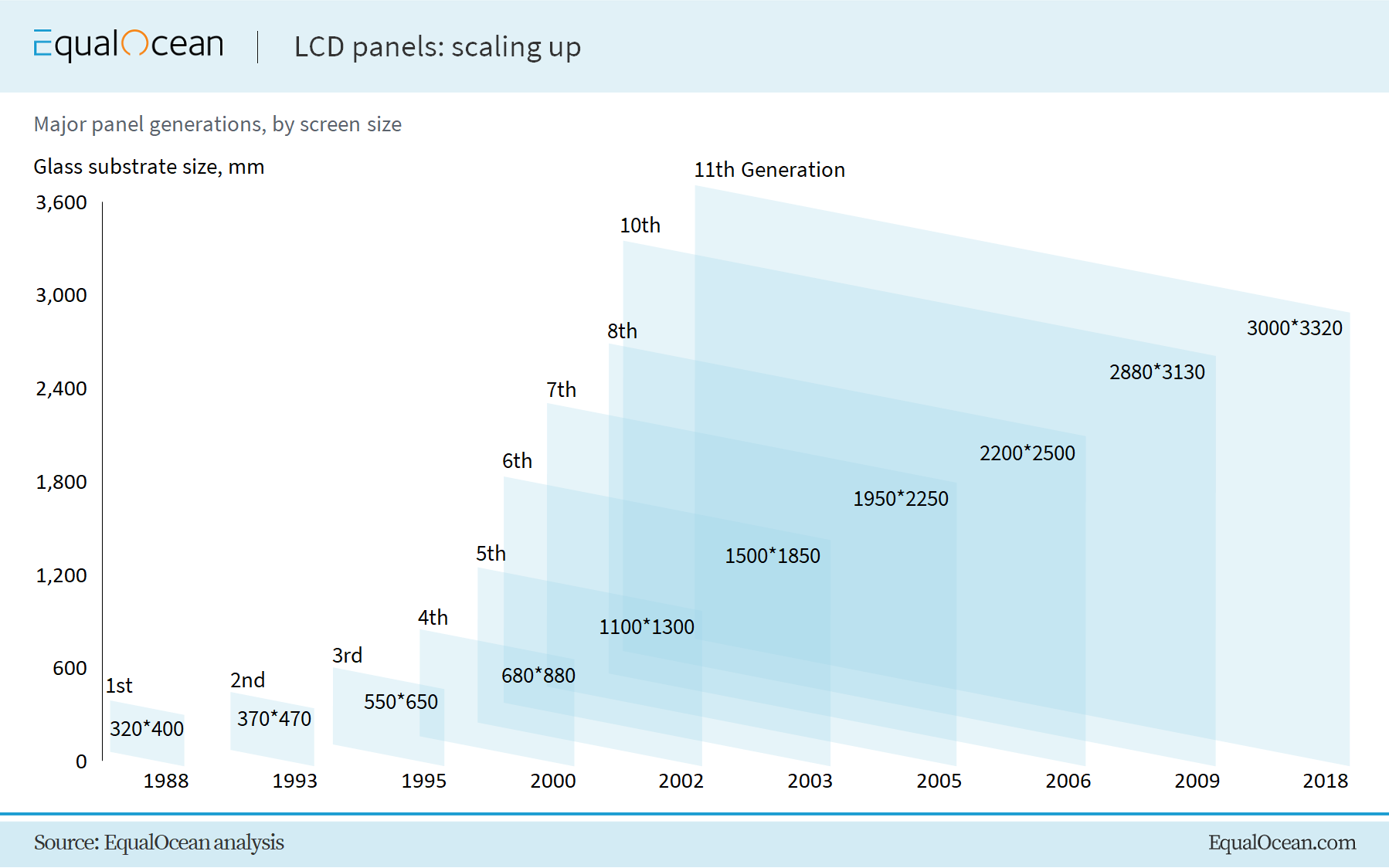 LCD panel makers have been striving to realize bigger-size products in the past four decades. The technology breakthrough of Gen 5 in 2002 made big-screen LCD TV available and it sent Samsung Display and LGD to the front row, squeezing the market share of Japanese panel makers.

The throne chair of LCD passed from Japanese companies to Korean enterprises – and now Chinese players are clinching it, replacing the Koreans. After twenty years of development, Chinese panel makers have mastered LCD panel technology and actively engage in large panel R&D projects. Mass production created a supply surplus that led to drops in LCD price. In May 2020, Samsung Display announced that it would shut down all LCD fabs in China and Korea but concentrate on quantum dot LCD (Samsung calls it QLED) production; LGD stated that it would close LCD TV panel fabs in Korea and focus on organic LED (OLED). Their retreats left BOE and China Stars to digest the LCD market share. 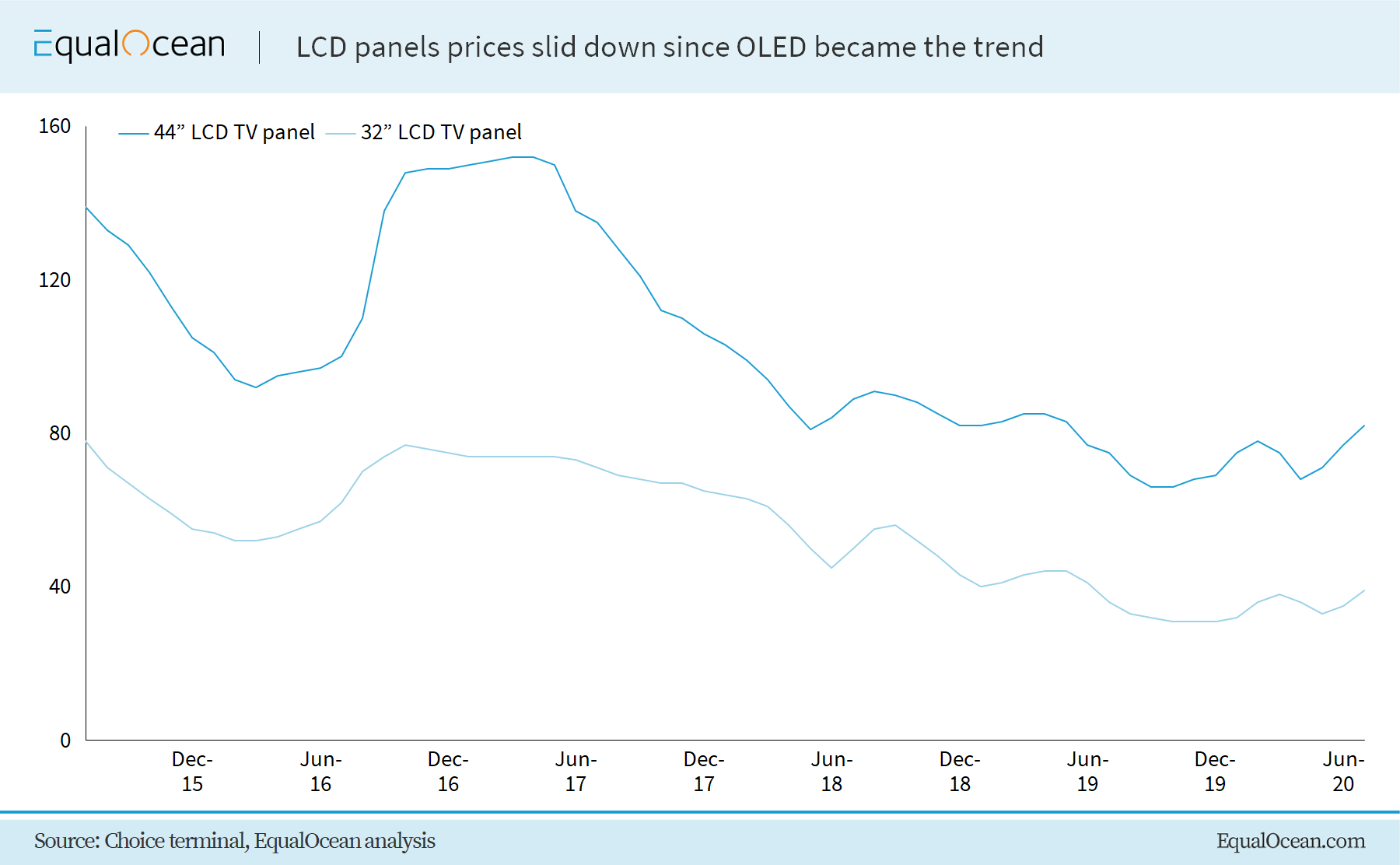 Consumer preference has been changing during the Korean fab's recession: Bigger-or-not is fine but better image quality ranks first. While LCD needs the backlight to show colors and substrates for the liquid crystal layer, OLED enables lighter and flexible screens (curvy or foldable), higher resolution and improved color display. It itself can emit lights – no backlight or liquid layer is needed. With the above advantages, OLED has been replacing the less-profitable LCD screens.

Samsung Display has been the major screen supplier for high-end consumer electronics, like its own flagship cell phone products and Apple's iPhone series. LGD dominated the large OLED TV market as it is the one that handles large-size OLED mass production. To further understand Korean panel makers' monopolizing position, it is worth mentioning fine metal mask (FMM), a critical part of the OLED RGB evaporation process – a process in OLED mass production that significantly affects the yield rate.

Prior to 2018, Samsung Display and DNP's monopolistic supply contract prevented other panel fabs from acquiring quality FMM products as DNP bonded with Hitachi Metal, the 'only' FMM material provider choice for OLED makers. After the contract expired, panel makers like BOE could purchase FFM from DNP for their OLED R&D and mass production. Except for FFM materials, vacuum evaporation equipment is dominated by Canon Tokki, a Japanese company. Its role in the OLED industry resembles that of ASML in the integrated circuit space. Canon Tokki's annual production of vacuum evaporation equipment is fewer than ten and thereby limits the total production of OLED panels that rely on evaporation technology.

The shortage of equipment and scarcity of materials inspired panel fabs to explore substitute technology; they discovered that inkjet printing has the potential to be the thing to replace evaporation. Plus, evaporation could be applied to QLED panels as quantum dots are difficult to be vaporized. Inkjet printing prints materials (liquefied organic gas or quantum dots) to substrates, saving materials and breaking free from FMM's size restriction. With the new tech, large-size OLED panels can theoretically be recognized with improved yield rate and cost-efficiency. However, the tech is at an early stage when inkjet printing precision could not meet panel manufacturers' requirements.

Technology breakthroughs can shift the outlook 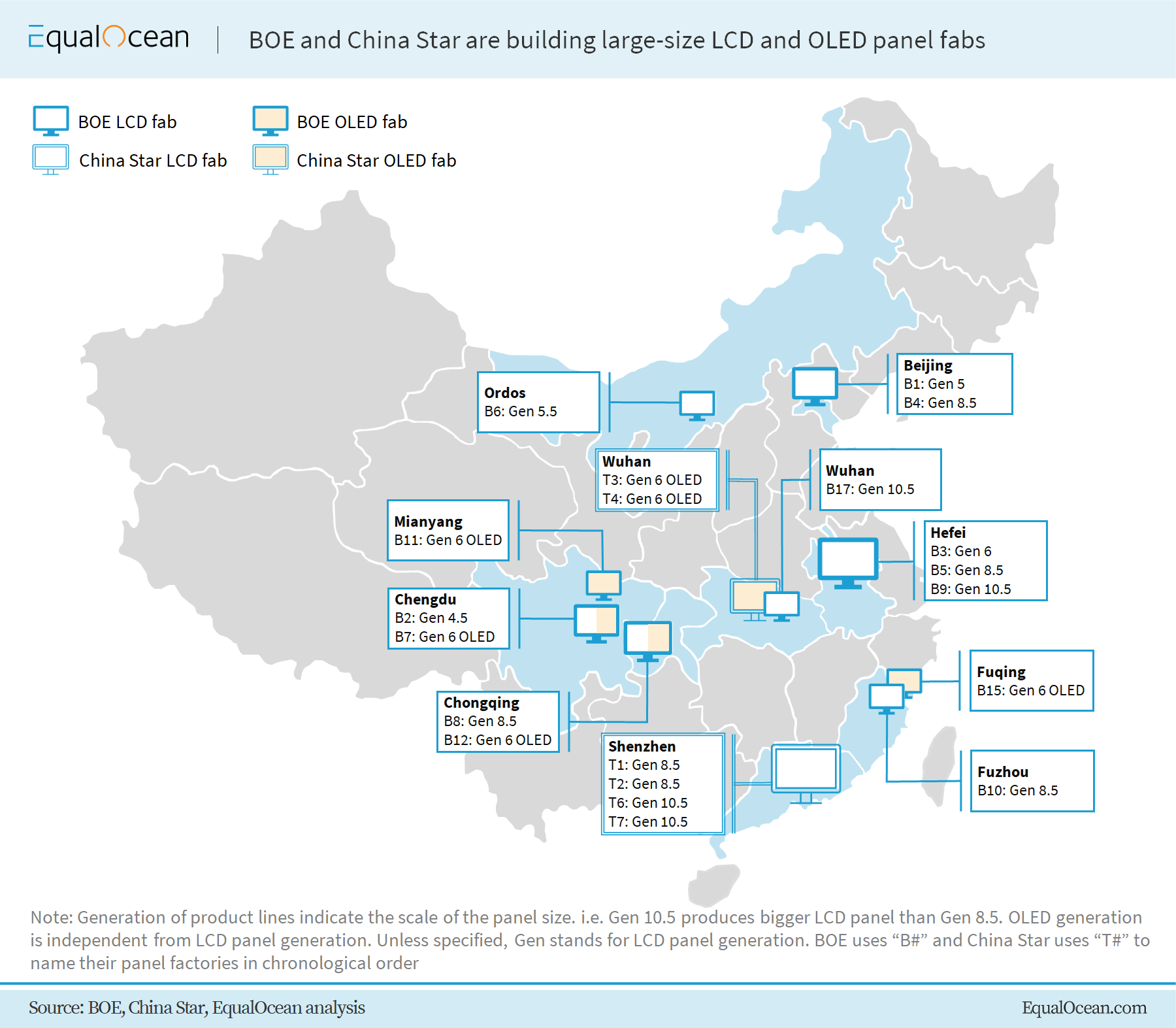 Remembering the last 'regime change' that occurred in 2005 when Korean fabs overtook Japanese' place in the LCD market, the new phase of panel technology changed the outlook of the industry. Now, OLED or QLED could mark the perfect time for us to expect landscape change.

After Samsung Display and LGD ceding from LCD TV productions, the vacant market share will be digested by BOE, China Star and other LCD makers. Indeed, OLED and QLED have the potential to take over the LCD market in the future, but the process may take more than a decade. Korean companies took ten years from panel fab's research on OLED to mass production of small- and medium-size OLED electronics. Yet, LCD screen cell phones are still available in the market.

LCD will not disappear until OLED/QLED's cost control can compete with it. The low- to middle-end panel market still prefers cheap LCD devices and consumers are satisfied with LCD products – thicker but cheaper. BOE has been the largest TV panel maker since 2019. As estimated by Informa, BOE and China Star will hold a duopoly on the flat panel display market.

BOE's performance seems to have ridden on a roller coaster ride in the past several years. Large-size panel mass production like Gen 8.5 and Gen 10.5 fabs helped BOE recognize the first place in production volume. On the other side, expanded large-size panel factories and expenses of OLED product lines are costly: BOE planned to spend CNY 176.24 billion (USD 25.92 billion) – more than Tibet's 2019 GDP CNY 169.78 billion – on Chengdu and Mianyang's Gen 6 AMOLED lines and Hefei and Wuhan's Gen 10.5 LCD lines.

Except for making large-size TVs, bigger panels can cut out more display screens for smaller devices like laptops and cell phones, which are more profitable than TV products. On its first-half earnings concall, BOE said that it is shifting its production focus to cell phone and laptop products as they are more profitable than TV products. TV, IT and cell phone products counted for 30%, 44% and 33% of its productions respectively and the recent rising TV price may lead to an increased portion of TV products in the short term.

TV and living room are disappearing in alpha cities

Except for outdoor large screens, TV is another driver that pushes panel makers to research on how to make bigger and bigger screens. A research done by CHEARI showed that Chinese TV sales dropped by 10.6% to CNY 128.2 billion from 2018 to 2019. Large-size TV sales increased as a total but the unit price decreased; high-end products like laser TV and OLED TV saw a strong growth of 131.2% and 34.1%, respectively.

The change in TV sales responded to a lifestyle change since the 4G era: people are getting more and more used to enjoy streaming services on portable devices like tablets and smartphones. The ‘disappearing living room' is a phenomenon common for the young generation in Chinese tier-1 cities.

Millions of young white-collars support the co-leasing business in China and breed the six-billion-dollar Ziroom, a unicorn company that provides rental and real estate management services. As apartments can be leased by single rooms instead of the whole apartment, living rooms become a public area while tenants prefer to stay in their private zones – it hints that the bedroom is too small to fit in a TV.

Besides the tier-1 cities' 'disappearing living rooms,' the mobile Internet gives another reason to explain the declining TV sale in China. Various streaming services and high-speed networks allow people to watch programs wherever and whenever they would like to. However, the change in life does not imply TV will disappear. For families, the living room is still a place for family members to gather and have fun. The growth of high-end TV sales also tells the 'living room' economy.

The demand for different products may vary as lifestyles change and panel fabs need to make on-time judgments and respond to the change. For instance, the coming Olympics is a new driving factor to boost TV sales; 'smart city' projects around the world will need more screens for data visualization; people will own more screens and better screens when life quality improves. Flexible screens, cost-efficient production process, accessible materials, changing market and all these problems are indeed the next opportunity for the industry.

CONTACT US
Scan QR code to contact us for professional consulting services
Next article
Growth and Challenges of Pinduoduo, the Chinese eBay – Initiate with Hold [1/2]