Lalamove’s leading position in the intra-city freight business is likely to be threatened by the online ride-hailing giant DiDi, which has also joined the game lately. 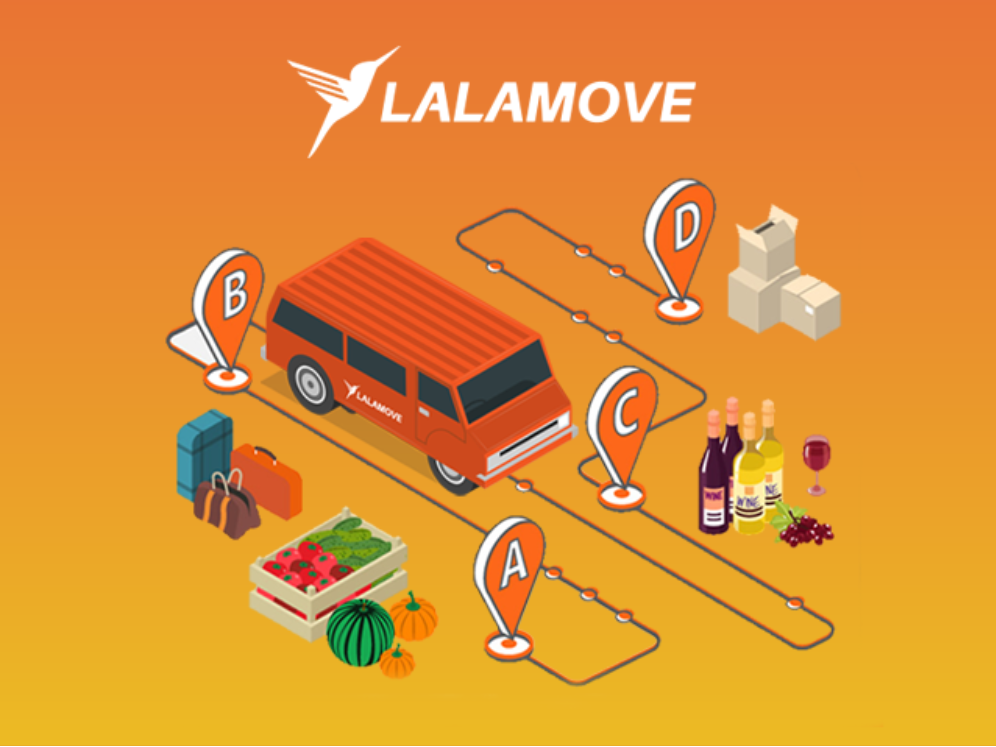 ► Lalamove is the largest online truck-hailing company in China, dominating about half the market. The company has a first-mover advantage in the industry, which has low barriers to entry but is very fragmented.
► The company solves the pain points of individual customers, SMBs with intra-city transportation services. By providing a platform that connects truck drivers and clients, the company’s income mainly comes from commissions and membership.
► On the path of scaling, changing the fragmented market brings values and requires a lot more tough jobs. For instance, drivers’ unscrupulous charges and service irregularities undermine customer values and thus harm the company.
► Is the first-mover advantage real or not? We believe it will take more effort for Lalamove to defend competition from strong players like DiDi, and the experience of the supply-side management remains the core competitiveness.

2013 is considered Year One for China's ride-hailing business. That year, the business giant DiDi was founded and swiftly grabbed the market share of Uber, the US competitor which had also entered China in the same year. Witnessing the promising future of the ride-hailing industry, Shing Chow, the Stanford graduate who was, by that time, a professional poker player, set his mind to enter this business.

But Chow was smart enough to avoid direct confrontation with DiDi, which had already gained scaling momentum in the online car-hailing. Instead, he noticed that, in the logistics industry, which is a trillion-dollar market, similar problems of difficulty in hailing a cab also exist. Founded in 2013, Lalamove once positioned itself as the freight version of DiDi, for they have the same operation mode – providing on-demand transportation services via cell-phone applications. Unlike traditional logistics agencies, the company targets small businesses and corporate clients and individual customers with intra-city transportation demands. Because it believed that, though the demands of transporting goods are less frequent for individual users, they might together form a big market.

Apparently, investors agree. In January 2015, less than one year after the company entered China mainland, it secured USD 10 million funding from renowned investors, including Sirius Venture Capital. The success of Lalamove lured more and more competitors to join the business. As of 2016, more than 200 intra-city logistic companies were registered. Faced with such a stiff competition, Lalamove again referred to DiDi's tactics –allowances.

Rushing to stake a claim in this new market, Lalamove also jumped in the allowance carnival, along with all its local competitors. This round of cash burning competition left two surviving players, Lalamove and Kuaigou, formerly known as 58 Suyun, which gained a rapid growth by acquiring Hong Kong-based freight service provider, GoGoVan. The two companies together accounted for nearly 80% of the market share in 2019. 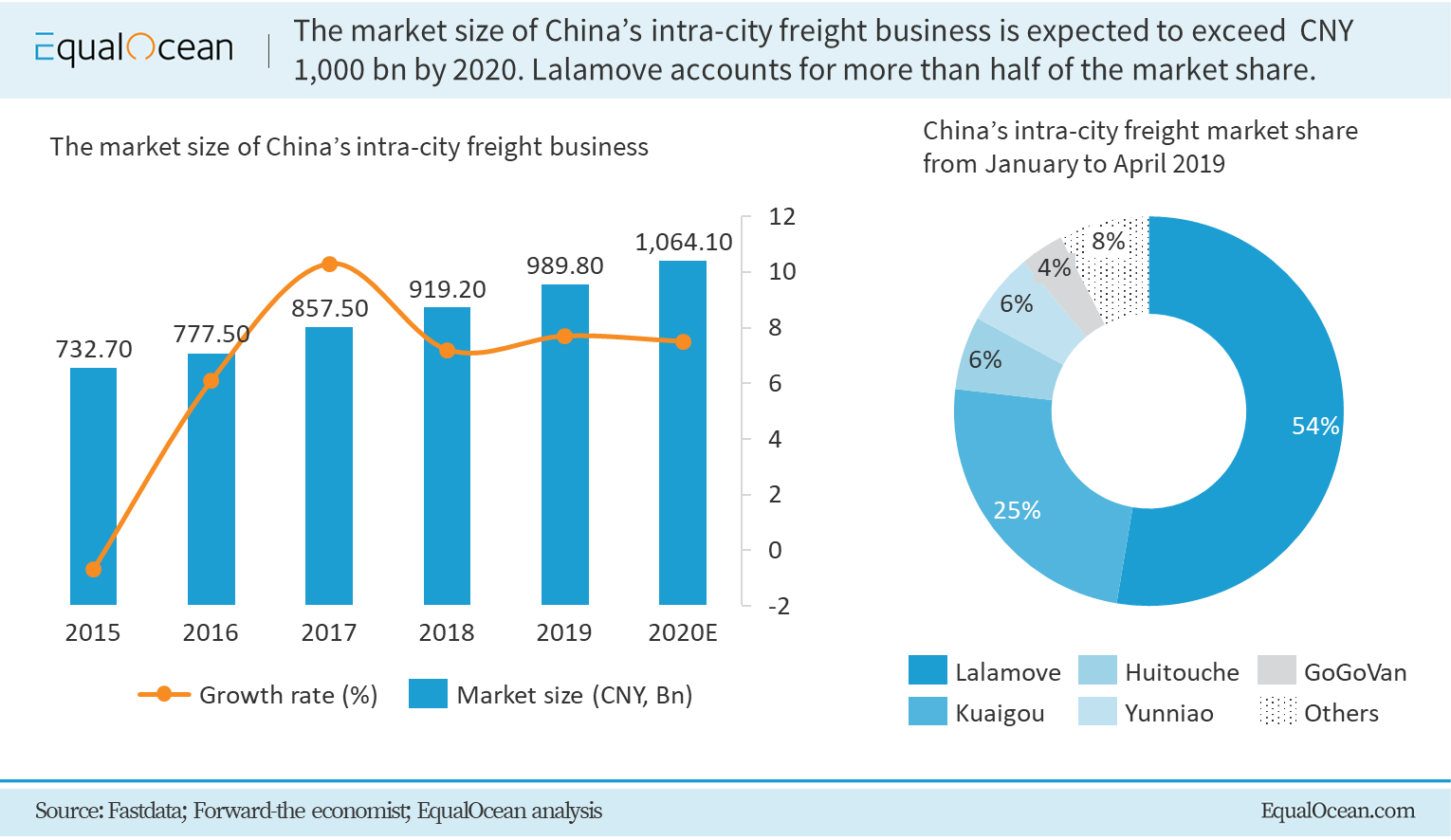 Before the emergence of Lalamove, people who needed to move had to spend a lot of time and energy contacting moving companies, often accepting an arbitrary price along with a series of unnecessary services.

Witnessing this chaotic but lucrative industry, Lalamove set its mind to make moving a much less stressful thing. The company then recruited a group of drivers ready to serve with their own trucks/vans. Clients with moving demands only need to fill in the necessary information on a cell-phone application (APP) on-site. The APP would then assign the order to nearby drivers with the help of an LBS-based algorithm.

As of May 2020, the company’s business had covered 352 mainland Chinese cities, Hong Kong and Taiwan and 21 overseas cities, with 480,000 monthly active drivers and 6 million monthly active users (MAU) across the world.

The ‘vices’ of the industry are more stubborn than imagined

In the beginning, Lalamove was exciting news for users who had had annoying moving experiences. But soon, they found that the solution was not as ideal as they imagined.

Unlike in the ride-hailing business where customers have fixed demand being transported from one point to another, it's hard for moving companies to provide a standardized charging rate for there are too many factors to consider.

Lalamove also only regulated the regulatable parts, like mileage fees, duration fees and charges per floor. For other particular demands, the platform allows the customers to discuss the charges with drivers. When subjectivity adds, the problems arise – more and more questionable charging incidents were exposed concerning Lalamove in recent years, which seriously undermined the company’s leading position.

But the drivers also didn’t do this for no reason. As the allowance craze receded, their income was significantly compromised. Lalamove’s business model adopts both membership and commission deduction. That is to say, drivers have to join the membership to get orders from the platform. Meanwhile, the membership fee can only protect them from a certain volume of free-of-deduction orders unless they go for the super VIP, which costs CNY 859 per month for a mid-size van in tier-one cities. In comparison with Kuaigou’s optional membership and DiDi’s temporary free of charge, plus the highest upfront fee, Lalamove ended up bringing the least income for its drivers, under three daily order volume circumstances (we assume) 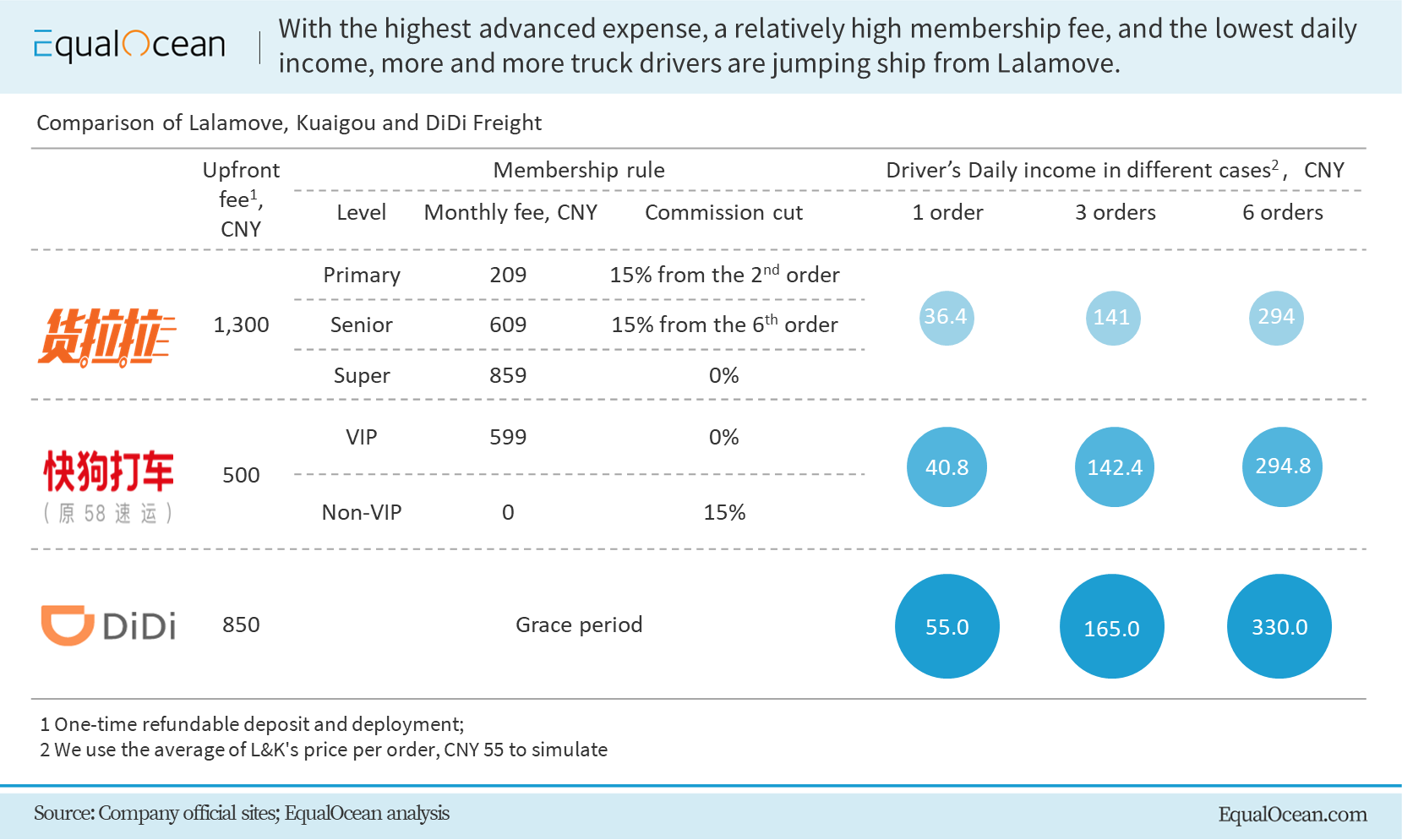 A new strategy is urgently needed

A first-mover advantage can be a false proposition for an 'established player' like Lalamove as giants like DiDi march into the battlefield. DiDi has established itself in the mobility industry with years of online ride-hailing operations. The company’s APP has 550 million registered users, who can all be potential users for its new freight service. Besides, as an Internet giant, DiDi is also more likely to provide a smoother experience for its users by integrating all services into one APP.

Lalamove’s experience of supply-side management remains the core competitiveness. For starters, although with a significant user foundation, it is still going to take time and money for DiDi to shake Lalamove’s market dominance. DiDi still plans to play the game in an old-fashioned way, judging from limited disclosed information – i.e. pouring allowances into the project. Aside from that, there is no significant difference in the business model from that of Lalamove. But history has taught us that price advantages don’t last. In the highly homogeneous business, the player that can provide differentiated services is more likely to win the game.

In addition, while DiDi just set foot into the B2C truck-hailing business, Lalamove has already begun to expand its business to larger-scale business end clients, and the car rental and selling business. As mentioned above, logistics and freight is a huge market in China. There are still many undiscovered opportunities. As a senior player, Lalamove has the chance to unlock these fields before DiDi, and even discover a new continent.