GWM’s reaction to the coming smart vehicle age is a wise move from the point of view of a top domestic auto manufacturer. 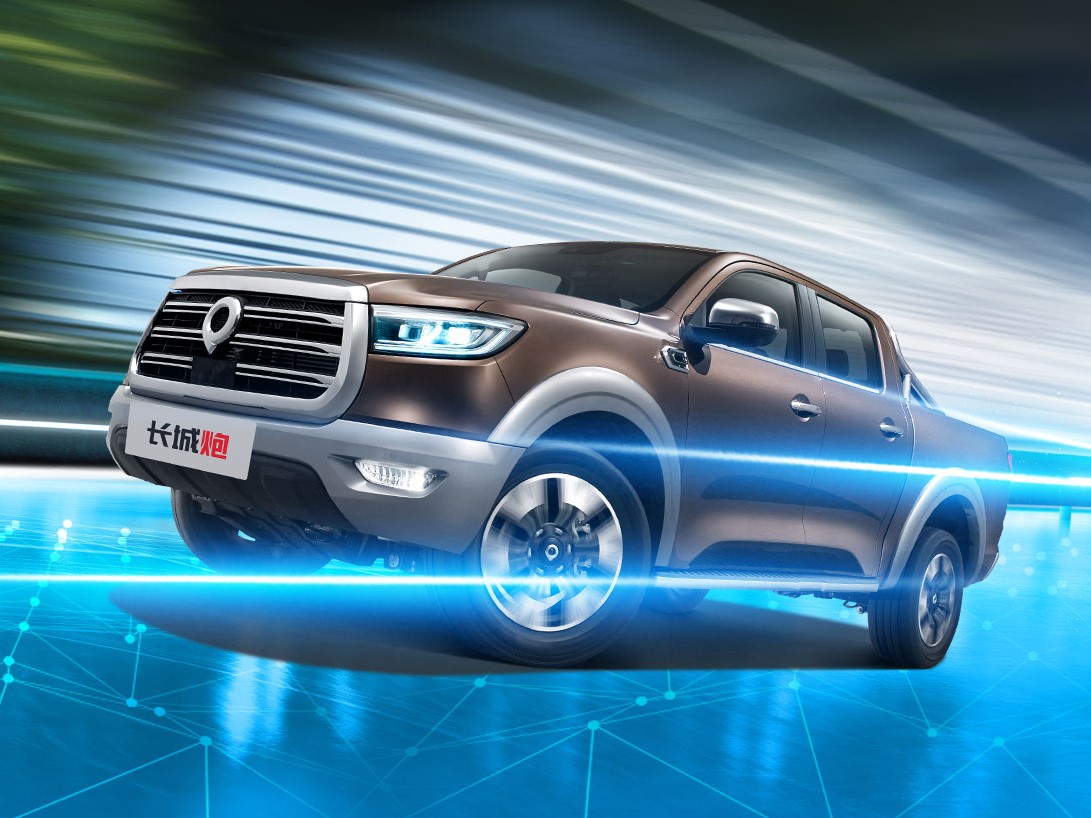 ► Great Wall Motor (GWM) keeps focusing on core vehicle technologies. It has kept the leading position in the Chinese SUV and pickup truck market. With a focus on the efficiency and reliability of engines and other key parts, GWM dominates the Chinese economical SUV and pickup market.

► It actively collaborates with tech giants for vehicle intelligence. It has established alliances with leading internet companies and telecommunication giants like Tencent, Huawei, and Baidu for the commercialization of smart vehicles. By showing the capabilities of vehicle assembly, GWM has earned the trust of the partners and integrated vehicle intelligence technologies to its models.

► Overseas market is an important patch of its business.  Based on the cost-effectiveness of its models, GWM successfully entered the Russian, African, and South American markets. It is now processing production localization for these markets.

At the 30th anniversary of GWM, the president of the board Jianjun Wei released an open letter titled as How will GWM Survive the Next Year. Jianjun claimed that challenges of the downward-sliding automobile market and of the rising power of automobile intelligence technology will be fatal to GWM, and the only remedy is transforming to a global travel technology company.

Benefitting from legacy business, the operating and financial figures tell a different story. After the inevitable losses during the COVID-19 crisis, the sales and net income of 2020 Q2 increased 25% and 142% YoY. With signature models including Haval H6 and WEY Tank 300 set for release in the second half of 2020, GWM’s sales are expected to have a further increase. The capital market holds a positive view on GWM. Its stock price experienced several sharp increases in the past 3 months.

GWM has ridden the wave of the growing Chinese SUV and pickup truck market in the last 20 years. It has developed brands such as Haval, WEY, and GWM Pickup, that helped GWM come first in the SUV and pickup truck market. GWM’s strategy of focusing on less competitive sub sectors of the passenger car industry has helped it grow fast in the Chinese automobile market that was dominated by joint ventures of overseas companies and domestic leaders for the last 30 years. The amount of its sold vehicles has kept a stable level even among the depression of the automobile market in 2018 and 2019.

According to Mr. Wei the president, however, the true crisis of GWM is yet to come. His opinion is based on the fact that Chinese domestic automobile companies have never faced any desperate situation before, compared with global automobile giants. Jianjun concluded that auto giants’ centuries of accumulation enabled them to keep long-sighted during technological revolutions and dominate the industry for all the eras. In order to survive in the coming age of automation and intelligence, GWM is making decisive changes.

Notably, GWM is collaborating with all of the ‘Big Three’ of the Chinese Internet industry – Alibaba (especially through the subsidiary AutoNavi), Tencent, and Baidu, which is quite unusual considering the competitive relationship between the tech giants. Attracting ‘BAT’ names shows not only GWM’s influence in the Chinese automobile industry, but also its collaborating mode that enables all partners to take their unique advantages and receive desired returns.

As a traditional automobile manufacturer, GWM clearly recognized the disadvantages for itself in competing against technology companies of the future automobile intelligence technologies. The picture of related industries in China is getting stable, with the BAT taking control of most leading startups in autonomous driving algorithms, sensors, connected vehicle platforms, etc. by VC/PE investments. Traditional automobile companies find it difficult to enter the automobile intelligence technology industry and directly compete with technology companies due to the totally different corporation structure and R&D mindset.

GWM chose to keep developing its key capabilities in hardware manufacturing and vehicle assembly and connect with tech giants for emerging technologies. GWM is continuously improving its regular and hybrid engine modules for thermal efficiency and safety. The thermal efficiency will reach 41% of GWM’s conventional engines and 42% of hybrid engines in 2022, which will allow it to lead the market. As the SUV/pickup truck manufacturer, it also focuses on vehicle reliability and adaptivity.  GWM’s new car module platform can also reduce the car's pitch angle of the body by 50% and increase the steering accuracy by 16%. GWM is thus attractive to intelligent auto technology providers for its strong production power, which enables it to integrate their software and sensor technologies, translating well to smart vehicle manufacturing. 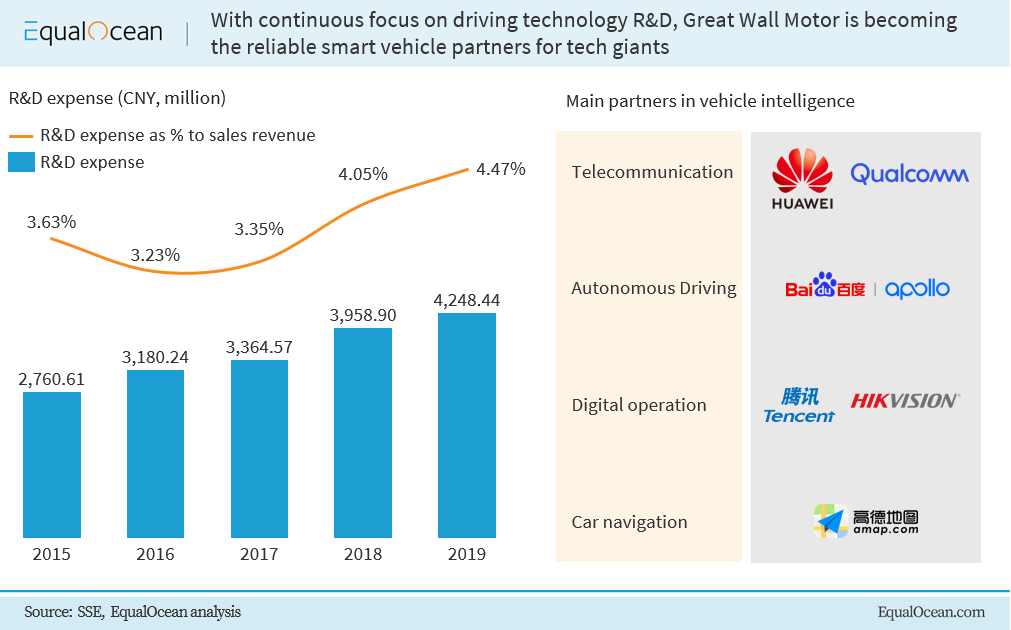 GWM’s plan of developing core manufacturing technology and collaborating with technology companies for automobile intelligence is a wise move that allows each partner to play its role. With such a structure, GWM is able to further devote its resources to the commercialization of the latest technologies and the realization of smart vehicles. It thus overcomes its shortcomings in emerging technology and is riding the wave of automobile intelligence.

After 2017, GWM emphasized the importance of the global market. With continuous expansion in Russian, African, and South American markets, its sales have increased dramatically. Great Motor is well-prepared for the globalization of its production. In 2019, GWM finished the 4-year construction of its whole vehicle factory in Russia, which is also the first overseas sole proprietorship full process manufacturing factory of the Chinese auto brand. The factory is apparently destined to produce 65% of the Haval SUVs in the Russian market. 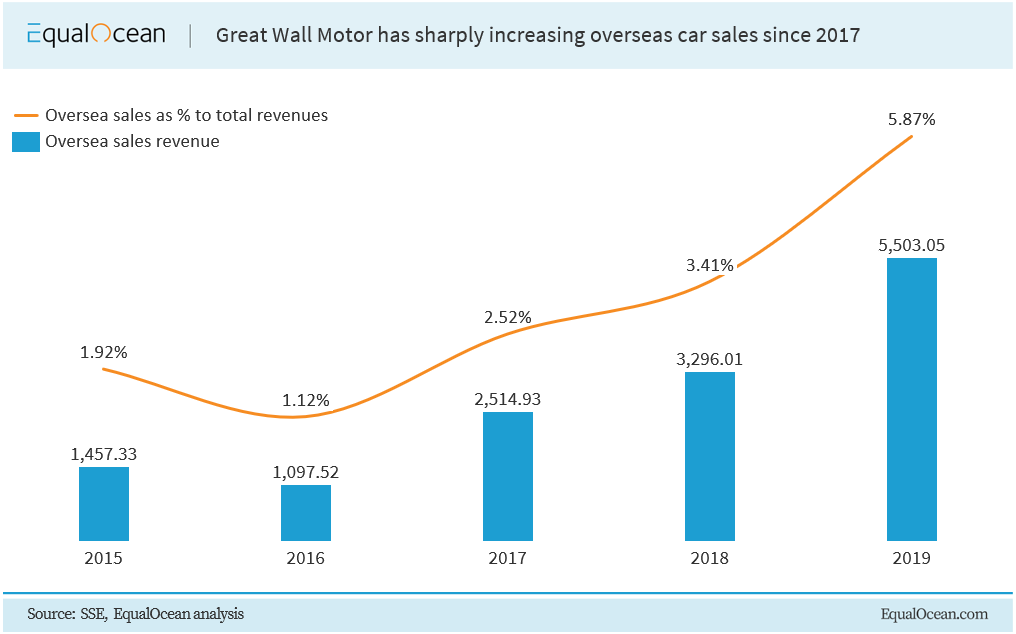 GWM considers the global market the key to its future success. As the Chinese market has shown the signs of the end of the fast-developing period, it is reasonable for GWM to pay more attention to emerging markets that have a strong demand for pickup trucks and SUVs. In such markets, economical car models are much more welcome than luxury cars, which are the sectors of expertise of GWM. After entering the market by cost-efficiency, GWM is now taking the steps towards production localization.

According to Jianjun, transforming to a global smart travelling service provider is the key for GWM to upgrade to an international giant. During the coming smart vehicle age, GWM has the opportunity to realize its dream.

CONTACT US
Scan QR code to contact us for professional consulting services
Next article
Li Auto: Short Cut or Detour? — Initiate with Buy [2/2]