As the global smartwatch market grew by a staggering 10% in Q1 2020, the world's top technology vendors competed fiercely. Will the young Huami innovate its way out and thrive under the unprecedented market pressure? 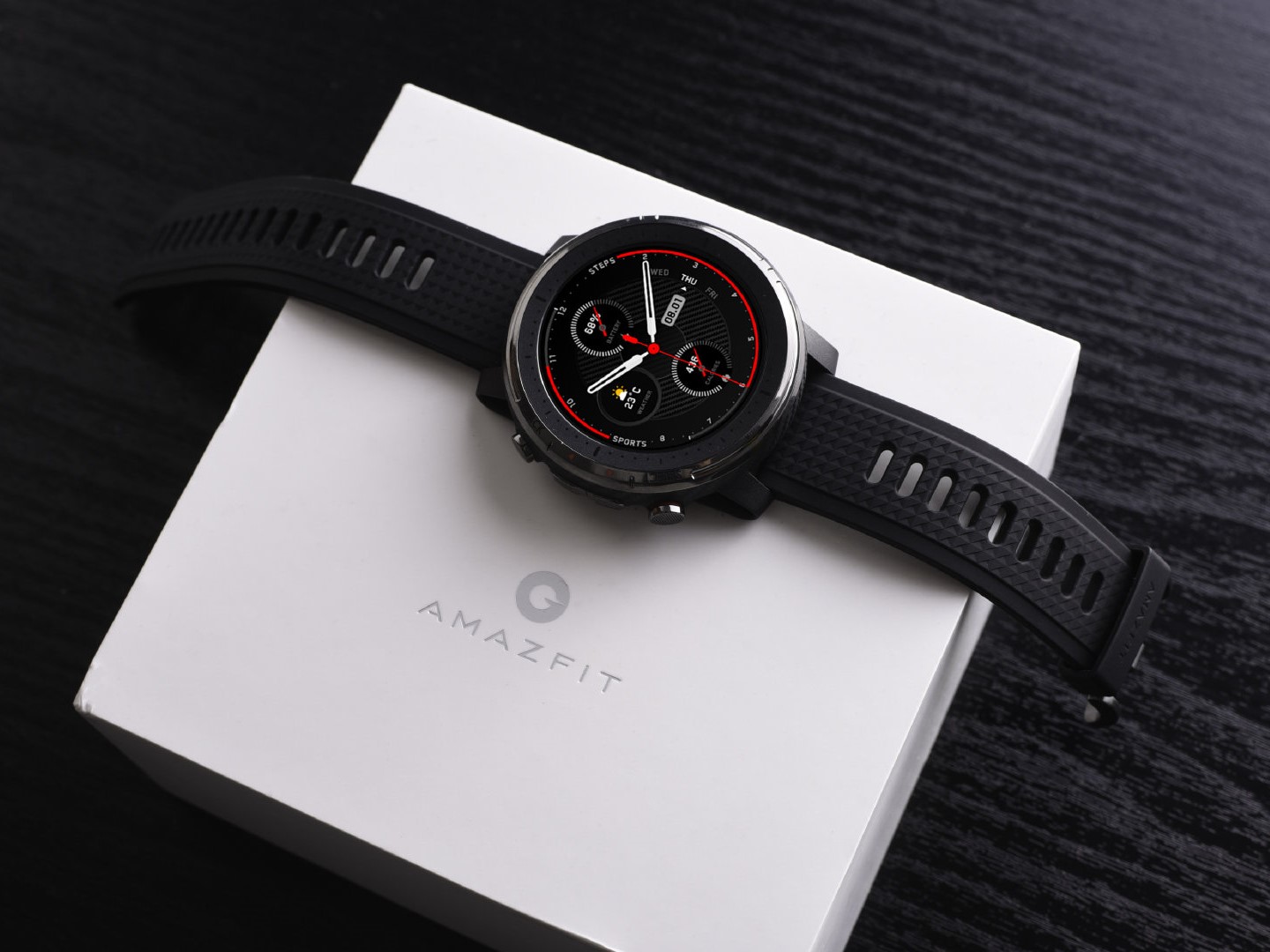 In previous Huami stories, we discussed the company’s business landscape and financial results over recent years, depicting its development dilemmas. Here, we continue the analysis of the smart wearable-specialized Chinese vendor from the perspective of its past and future business approaches. By looking at its ex-post records, we can better judge whether the company will go through an ascent or a downhill trajectory in the following years.

► Huami is trying to build a moat by specializing in the medical care area — and the tremendous upfront capital and human investment that come along with it.
► A more diversified product mix is required to prevent the medical-focused devices from scaring off customers in younger age groups.
► The company heavily relies on external cooperation through investment or strategic agreements for business expansion: its PE/VC volume grew ten times bigger than the growth of its asset purchase amount.
► So far without clear key selling points, Huami is working on massive healthcare-related research projects.

Over ten years, smartphones have been accompanying people well in work and life. Now, the consumers are getting tired of fairly homogenous handsets, leading the world’s top smartphone vendors to consider what can be substitutes, playing the role of the key personal device.

Two ways they have tried are making it bigger and making it smaller. The attempts to make the smartphone bigger are exemplified by Samsung's foldable screen phones, which could double the screen size after unfolding. The idea of 'making the phones smaller' has inspired a cross-category development: smartwatch hyper-development . The world’s finest tech corporations, including Apple (AAPL:NASDAQ), Samsung (005930:KS) and Huawei, have almost entered the burgeoning field at a strong pace.

A health monitor – not an advanced pager

Huami (HMI:NYSE), the young company which specializes in the smartwatch realm, seems to reckon smart wearable devices can be deeply integrated with various healthcare applications, rather than just being small-sized substitutes for smartphones.

Since its inception, Huami has been trying to build a moat by ploughing in the technology-driven and strictly scrutinized healthcare track. There are two folds to this strategy. First, several of the company's subsidiaries are registered and licensed as medical instruments providers, designing and producing qualified hardware with more accurate healthcare-related data monitoring. The second is to provide related services via software applications, a move designed to gain continuous revenue from customers after the hardware is sold. 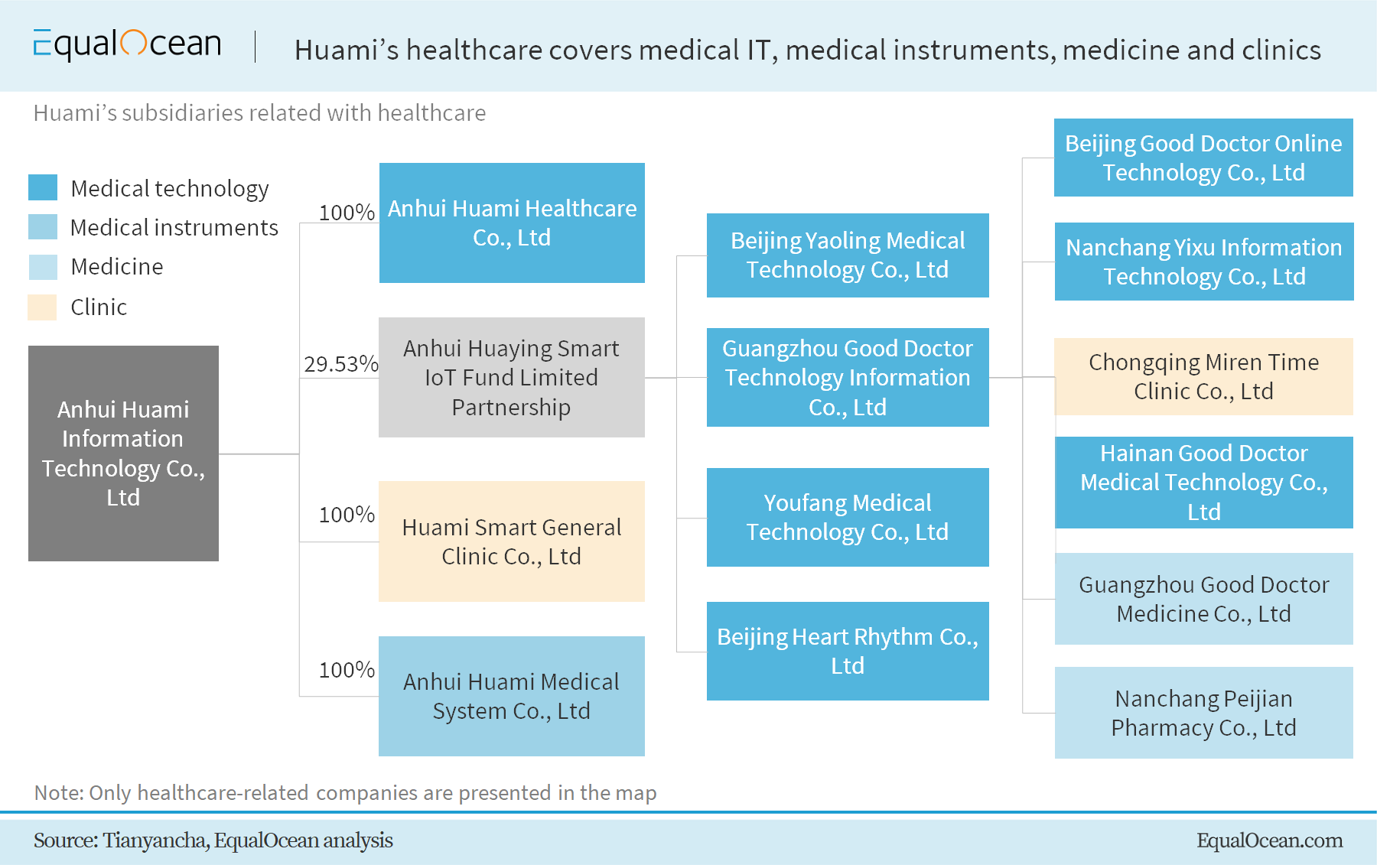 The subsidiary map clearly indicates that the company attaches great importance in the R&D of its products' medical related functions, with approximately ten subsidiaries specializing in medical technology. Notably, the firm is also working with clinics and hospitals to connect doctors with users via Huami's smartwatch platform to perform the diagnosis of heart diseases and provide rehabilitation services. The cooperation with offline clinics could further feature the company as a professional medical technology company, rather than a small fish in consumer electronics that assists people in communication and recreation.

As the company has revealed, the results of its efforts in medical R&D were rather fruitful. On June 15, the self-developed processor of Huami Huangshan 2 came out with a high recognition rate of atrial fibrillation — 7 times better than its predecessor Huangshan 1. Additionally, its software algorithms have also been improved 26 times over for heart disease detection. Previous devices with Huangshan 1 already claimed to be capable of detecting 97% of atrial fibrillation, which is almost the same as Apple Watch. The upgrade on SoC brings Huami a chance of being an outperformer in the medical wearable market.

Though the direction, investment and R&D results seem promising, the problems and risks are obvious in three respects. First, the demand might shrink due to health-focused product positioning. Customers in younger age groups, who are generally in good health, may find some of the body indicators not informative if they tend to lie in a stable range. Consequently, they may not be willing to pay for the functions that are not useful for them.

Second, if the product with accurate medical functions target the senior consumer group (18% of the total population in China), the operating system should be as simple as possible, and the outlook design might not be that attractive. Thus, the product lines must be divided by different target customer groups, otherwise, it will lose customers in the younger age group (64% of the total).

Last, though some progress in R&D has been achieved, Huami did not actually surpass its competitors that specialized in medical wearables – like Lexin Medical (300562:SZ) – in terms of technology standards. Vendors have to apply for the Class II medical device certification if the device is ECG (electrocardiogram)-enabled, which led to a situation where the devices with ECG certification were unable to properly differentiate from each other. However, Huami, with the help of its collaboration partners, has advantages in terms of advertisement and sales channels, compared with Lexin.

In a nutshell, going with the healthcare track is an efficient way to reduce existing competition and increase the new entrant barriers due to government regulation and capital requirement for upfront R&D, however, realizing a reasonable investment return through product mix and proper marketing measures is the key challenge.

Fund and team up – not just acquire

As the company’ s cooperation model proved to be beneficial at least for its financial performance, Huami has been launching more strategic alliances and investments to expand its business scope. From 2017 to 2019, the net cash in investments achieved over 600% growth from CNY 24 million to 181 million, while the cash for purchasing property, plant and equipment maintained a conservative growth at around 60%. Not processing the production capacity can bring operational risk, but the firm believes in utilizing the cash by investments and cooperation to be more efficient. 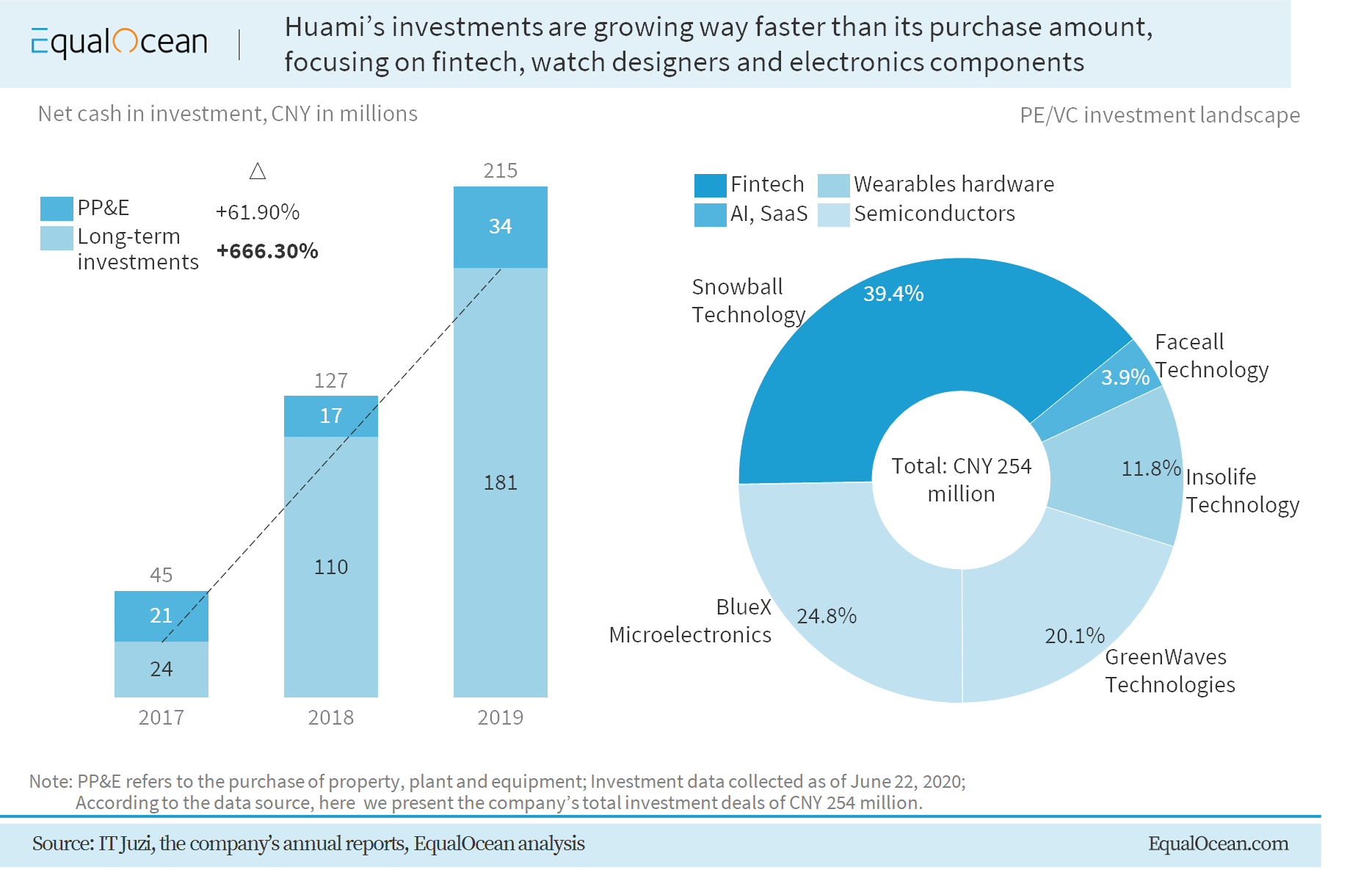 Except for the aggressively increased investment, the company has also been actively launching strategic cooperation to reach out to diverse application scenarios, more sophisticated products as well as more integrated distribution channels.

Also, to drive its software services, Huami has to integrate social features with its products and services, introducing new third-party services to the platform. For instance, currently focused on the opportunities associated with medical care, the company is working with insurance companies to distribute a set of insurance products. Since most of Huami’s investees are in Series-A round of financing, innovative ways like insurance cooperation are necessary to maintain cash flow at a healthy level.

Another pivoting strategy of Huami is to polish its healthcare services for users through AI-related technologies and big data system R&D.

According to the company, Huami’s big data storage system processes mainly two types of data — users’ activity data and biometric data. Based on the collected data, the company could be able to align with the data-driven strategy, deriving additional customized data such as calories burned, heart health index and even the likelihood of certain diseases.

AI algorithms, as one of the key approaches to realize big data analysis, is drawing Huami’s strategic focus as well. The company announced it would set up an AI research institution on the same day when the next generation of Huami’s AI chip Huangshan 2 was released. Research projects initiated by Huami are also numerous. For instance, the company has inked a cooperation agreement with Chinese respiratory expert Zhong Nanshan's team for the follow-up treatment of recovered COVID-19 patients, and teamed up with the University of Science and Technology of China to establish the brain-computer interface joint laboratory.

The research projects reflect how the company is still in the phase of searching for key selling points for its upcoming products – though the direction is clear enough, with all prospective projects being in the realm of medical services. Whether the time Huami spends before it releases the next punchline product could be shorter than the time that its competitors take all market shares remains ambiguous.