Given investors’ increasing optimism in Chinese IPOs and the transformation of new retail companies, ten companies are anticipated for potential IPOs. 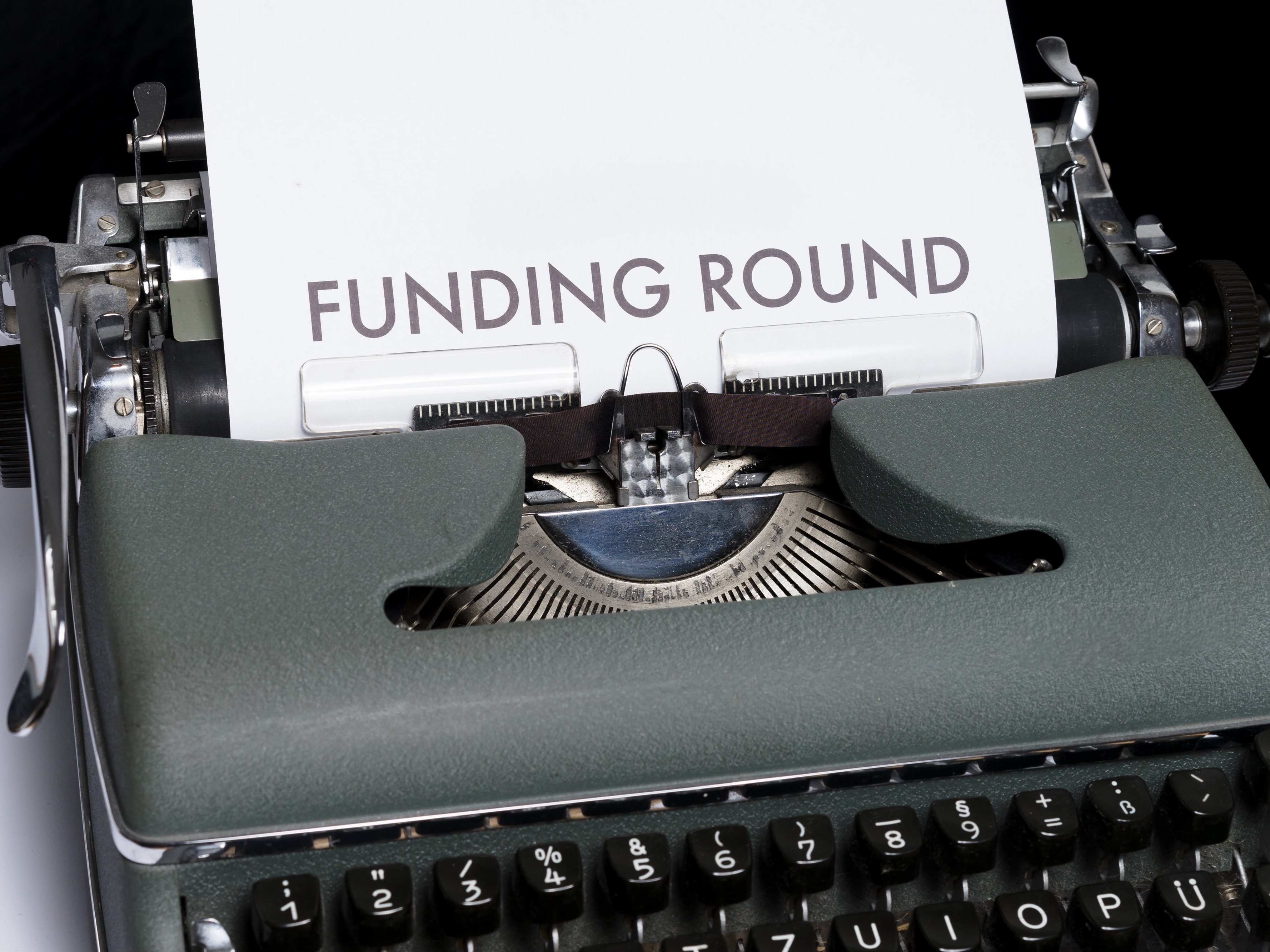 Even though COVID-19 has impacted business activities globally, the Chinese stock market has recovered rather quickly, and the IPO deals have been pushed through at almost the same levels as at the same time last year. Investors are quite optimistic about Chinese stocks – the stocks added about $1 trillion in value last week after the government encouraged investors to buy the country’s shares.

EqualOcean has long been keeping a close eye on China’s retail companies. In this article, we will introduce ten companies that are most anticipated for their potential IPOs, given investors’ increasing optimism in Chinese IPOs and the transformation of new retail companies. 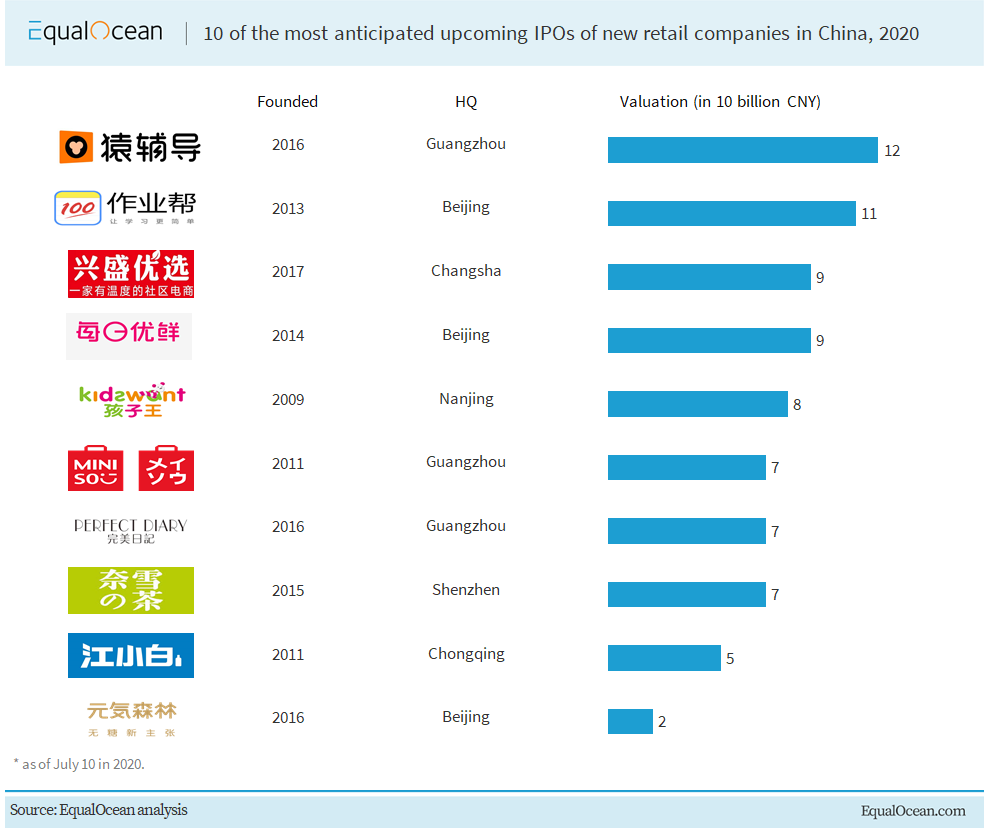 Yuanfudao is a unicorn company, founded in 2012 and focused on Chinese K12 online education. It is competing with GSX and Zuoyebang as one of the Chinese top edTech companies during the Covid-19 epidemic. In eight years, Yuanfudao’s cumulative service users have already exceeded 400 million. It owns products such as Xiaoyuan Souti, Xiaoyuan Kousuan, Yuantiku and Banma AI that cover a broad spectrum of studying scenes. On March 31, Yuanfudao officially announced the completion of its latest G round financing, led by Hillhouse Capital, Tencent Investment, Boyu Capital and IDG capital. After the round was completed, the valuation of Yuanfudao reached $7.8 billion.

Zuoyebang was internally incubated by Baidu in 2014, and it started to operate independently in 2015. It began with tool-based education applications like photo search. After accumulating a certain number of users, Zuoyebang cut into the online live class market. Currently, it has various educational products, including Zuoyebang, Zuoyebang Zhiboke, Zuoyebang Kousuan. With more than 800 million cumulative service users, Zuoyebang is presently the largest K12 online education platform in China. Its latest E round fund happened on June 29 and helped the company raise $ 750 million.

Xingsheng Selected was founded in 2014. It seized the opportunity of community group purchases and fresh e-commerce platforms, forming an e-commerce platform focused on community groups. Already deployed in 12 provinces, it has tens of millions of active users, with over 7 million daily orders. On June 1, Xingsheng Selected got a B round financing of $200 million from KKR. It was also revealed as one of a number of Changsha companies under listing in 2020, and it is possible it will be the first community group fresh retail company to go IPO. The firm competes with Qdama, Miss Fresh, Tongchengshenghuo in China.

Miss Fresh is a fresh retail unicorn founded in 2015. At the beginning of 2020, the monthly active users of Miss Fresh were in first place in the market, with more than 2.7 million users, followed by Yonghui Life and Hema Xiansheng, with 1.9 million and 1.5 million MAU respectively. In May, Miss Fresh also completed its latest round of financing with multiple investors, including CICC, according to 36Kr. This round of funding will add pressure on its peers, at least on the pre-warehouse track.

Kidswant specializes in mother and child products, aiming to provide an all-inclusive business model to meet the demand of expectant mothers and children aged 0 to 14. On April 23, 2018, Kidswant was delisted from NEEQ,  despite increasing positive revenue and more than 16.7 billion CNY in market value at the time. In recent years, its online platform has gradually gained customers through its offline store reputation and premium membership population. On July 13th, the official website of Shenzhen Stock Exchange announced the prospectus of Kidswant, which mentioned Kidswant’s plan of raising 2.45 billion CNY through IPO on GEM.

Miniso was founded by Guofu Ye and Japanese designer Miyake Junya in 2013. It initially positioned itself as fast-fashion retail stores, with most product pricing around 10 CNY. It sells very similar products to big brands like MUJI, but at a much lower price, also includes successful joint name products like the ones with Marvel. In 2018, Miniso received 1 billion CNY strategic investment from Hillhouse Capital and Tencent Investment and launched its project of preparation for an IPO.

Perfect Diary is a Chinese cosmetics brand founded in 2017. It has recently discussed IPO matters with several investment banks and is expected to be listed at the end of this year or the first half of 2021. Its investor lineup has been quite strong, including prestigious institutions like Zhenge Fund, Boyu Capital, Tiger Global Management and Hillhouse Capital.

Naixue Tea (known as Nayuki) is a well-known domestic tea brand founded in 2015. All stores are directly operated, and not allowing any form of franchise. The main products include Xunhaocha, hand-made soft French bread and cold bubble tea. It emphasizes the quality and freshness of ingredients and aims to develop healthier drinks than traditional milk tea. Recently, the market rumors reveal a potential US IPO plan of Naixue Tea, aiming at raising as much as 400 million dollars.

Jiang Xiaobai is a Chinese light-aroma baijiu brand with a focus on the market of young adults. It was founded in 2012 by Shiyuan Tao, who founded the new trend of a younger population in online alcohol consumption. Jiang Xiaobai’s investors include Hillhouse Capital, Sequoia Capital, IDG Capital and other domestic first-tier funds. Reuters reported that Jiang Xiaobai planned to IPO to raise $500 million to $1 billion in 2020, but the firm has denied this news.

Genki Forest was founded in 2016 and is well known to consumers for its representative product – sparkling water. In 4 years, Genki Forest has completed four rounds of financing with a valuation of 4 billion CNY. Its product category has evolved from the initial sugar-free sparkling water to the current sugar-free tea, milk tea, fruit tea and other beverage subdivisions. On July 4, Genki Forest’s first self-built factory in Chuzhou was opened to the public for the first time. It has three high-speed production lines with an annual output of 450 million bottles.

Although spreading through the spectrum of the retailing industry, all ten companies have emphasis on digital transformation. For the online education market that includes Yuanfudao and Zuoyebang, the market has crushed out more and more small-to-middle-size players in recent years because of its high cost of winning new customers and building a stickier customer base. The increasing advertisement fee and low conversion rate add pressure on giant players, but at the same time promotes creative products with higher efficiency like AI classes and double teacher live broadcasts. Future differentiators in the industry are very likely to be the ability to independently generate followers and to develop high-quality educational products.

For the cosmetics market and soft drinks market that, includes companies like Perfect Diary, Naixue Tea, Jiang Xiaobai and Genki Forest, the main players all aim to attract the younger generation. Their advertisement through different online platforms like Xiaohongshu and Tiktok, their fashionable designs and PR strategies all boost their short-term popularity. However, behind the high revenue growth among these companies, ongoing challenges are still building up around consumers’ confidence in domestic products. With unsustainable sales strategies oriented around Japanese-like brand names and cheaper substitute concepts, we see further limits to the possible future margin growth.

For fresh e-commerce companies like Xingsheng Selected and Miss Fresh, EqualOcean expects the differentiator to be the ability to break into third and fourth-tier cities, where local lower-priced farm goods create higher barriers to entry. With a long supply chain built into the market, every adjustment and renovation could significantly increase the cost. This kind of challenge also caused a high amount of bankruptcy in the industry at the end of 2018. Besides, more prominent companies like Meituan and DiDi have also entered this community group fresh e-commerce business, posing challenges to smaller ones.