China’s TWS (True Wireless Stereos) market is awaiting a leader with superiority in technology and brand image to compete with both the real and the mimic-Airpods. 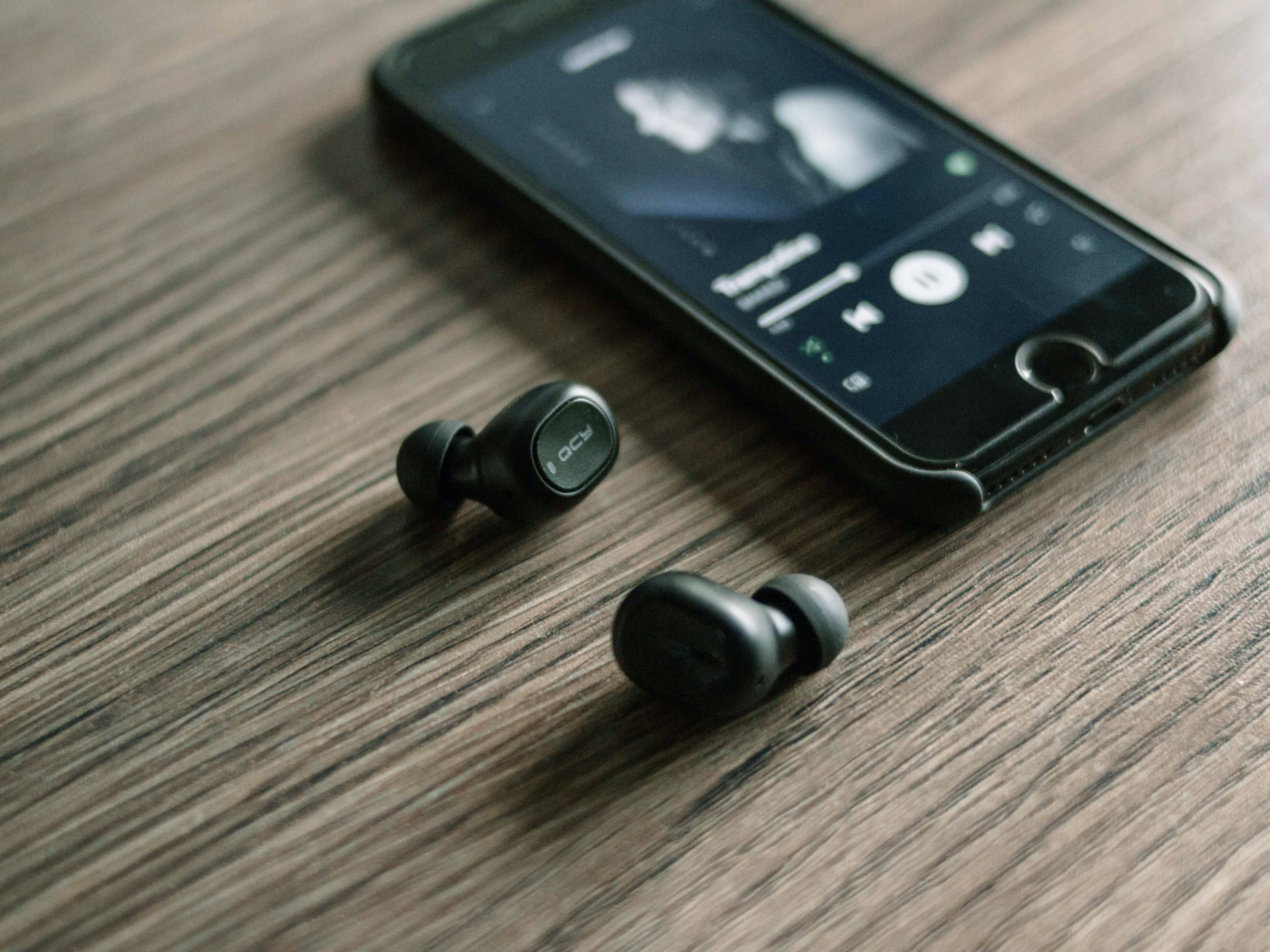 The first part of China's TWS story will discuss on topics related with consumer market, product and technology. For the global trends and China’s goods and capital market performance in the TWS-related area, please click here to find more.

► Similar to the knockoff smartphone market in China 15 years ago, high price-efficiency and decent brand management are key in the ambitious TWS vendors’ quest to grasp the highly scattered market segments.
► Shenzhen Huaqiangbei, something of a wind vane of the electronics world, is currently facing a great deal of hype around lower-priced TWS products.
► Bluetooth, as the core component in performance improvement, accounts for approximately 60% of the earbuds’ total cost.
► Chinese Bluetooth chip makers are on track to fill the technology gap between Airpods and others.

History repeats itself – and there is no reason to think of consumer technology as an exception. By the time Apple’s (AAPL:NASDAQ) iPhone 4 was released in 2010, mobile phone knockoffs in the Chinese market had been prevailing for six years since the loosening policies for mobile phone licenses were implemented. Hundreds of dazzling smartphone vendors were actively delivering their products to the consumers nationwide. At this moment, in 2011, Xiaomi was given the floor to present its authentic products with ‘honest’ (ultra-low) pricing and took most of the market share for counterfeit mobile phones, finally drawing an end to the market chaos. After that, Huawei won the local consumer majority’s recognition for the better performance of its Kirin processors.

According to NBD, in Shenzhen Huaqiangbei electronics manufacturing and wholesales hub, the ersatz Airpods products are mainly priced at an interval between USD 8 to 57, with poorer sound quality and battery time, compared to those of Apple’s originals. The end of the smartphone copycats left hints for the current Chinese TWS market, which largely resembles the mobile phone ‘mess’ ten years ago.

First, since it is at the current stage, the TWS market has not yet become a necessity and its complementary products abound such as traditional earphones with wire and the internal speakers, the consumers remain price sensitive. The logic is the same as what happened 10 years ago when smartphones were not necessities – back then the function phones could satisfy the basic needs for communication. The low prices won customers.

A victory is almost certain if the low price can come along with a comparatively high quality. Second, when adding good brand management to the recipe – as Xiaomi (01810:HKEX) did with MIUI, its operating system – a preeminence is secured, since from the marketing perspective, a sense of identity is the best thing a brand can offer.

The only difference is that nowadays, Chinese domestic vendors such as Huawei, OPPO and Xiaomi have already reached out to everything related to consumer technology – and the competition among them has dragged the price to the valley. Why do the knockoff TWS products still have the room to flourish? Because neither the established Android phone brands nor the Huaqiangbei low-cost products are able to reach the low latency and low power consumption at the level of Apple’s Airpods. Without much in the way of legal risk or public pressure, small vendors could even offer earbuds that have the exact same appearance as the Apple’s masterpiece, but with cheaper Bluetooth chips inside, which might be attractive to some consumer groups. 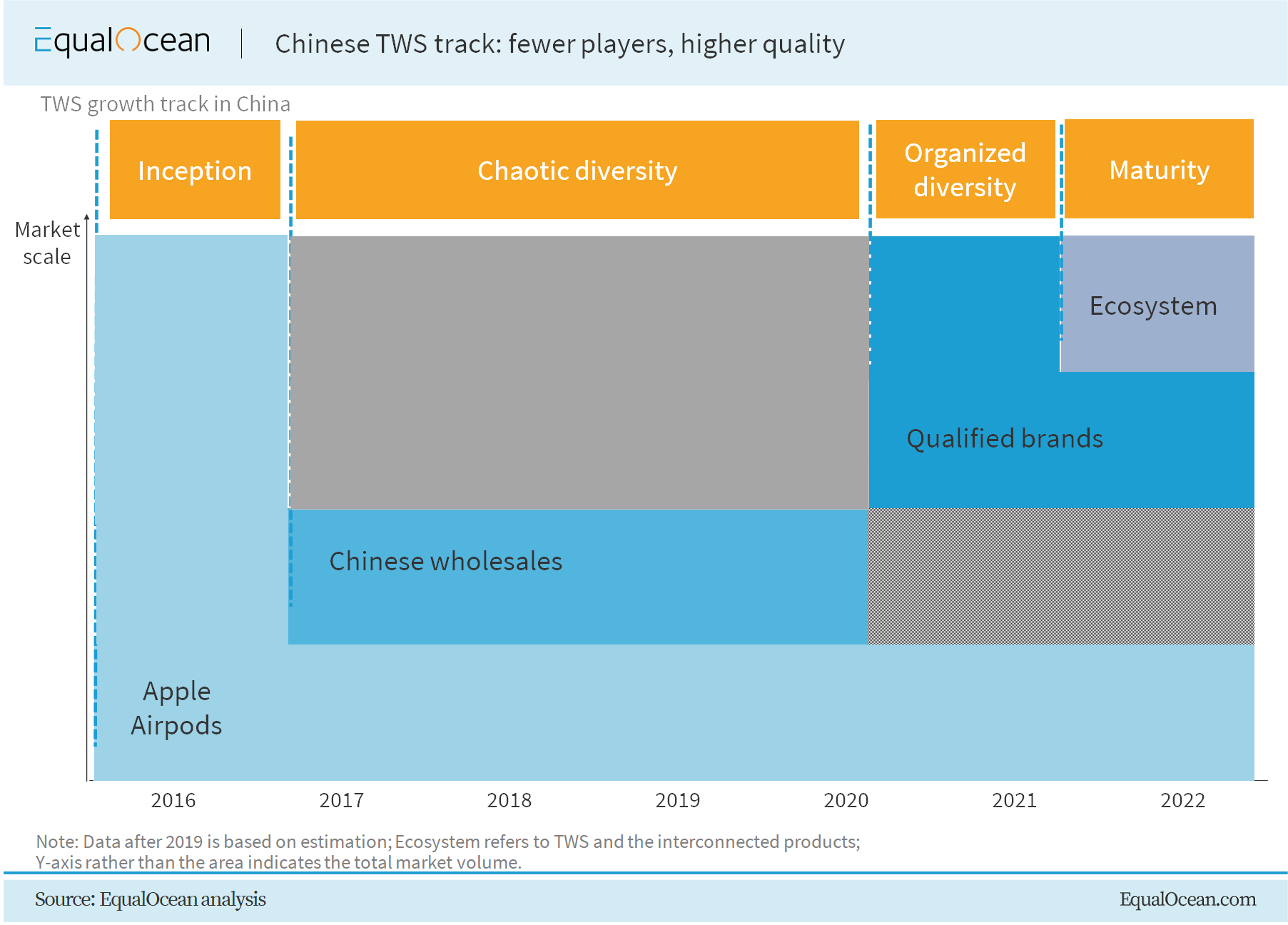 Shenzhen Huaqiangbei electronics wholesales district has long since won a reputation as the ‘incubator’ of Chinese millionaires. For instance, the tale of the Tencent (00700:HKEX) empire started in the district. Business thrives there in the mountains of RAM sticks, hard disks, SD cards, capacitances, smartphones and many other electronics-related products that have made thousands of entrepreneurs affluent in a wink, while millions of others have entered the ‘xiaokang’ (Chinese: well-off) life standard social group. As one of the most responsive spots in the electronics world, trendy products, in today’s case, TWS and its main components are highly likely to become the next rapidly growing segment in China. 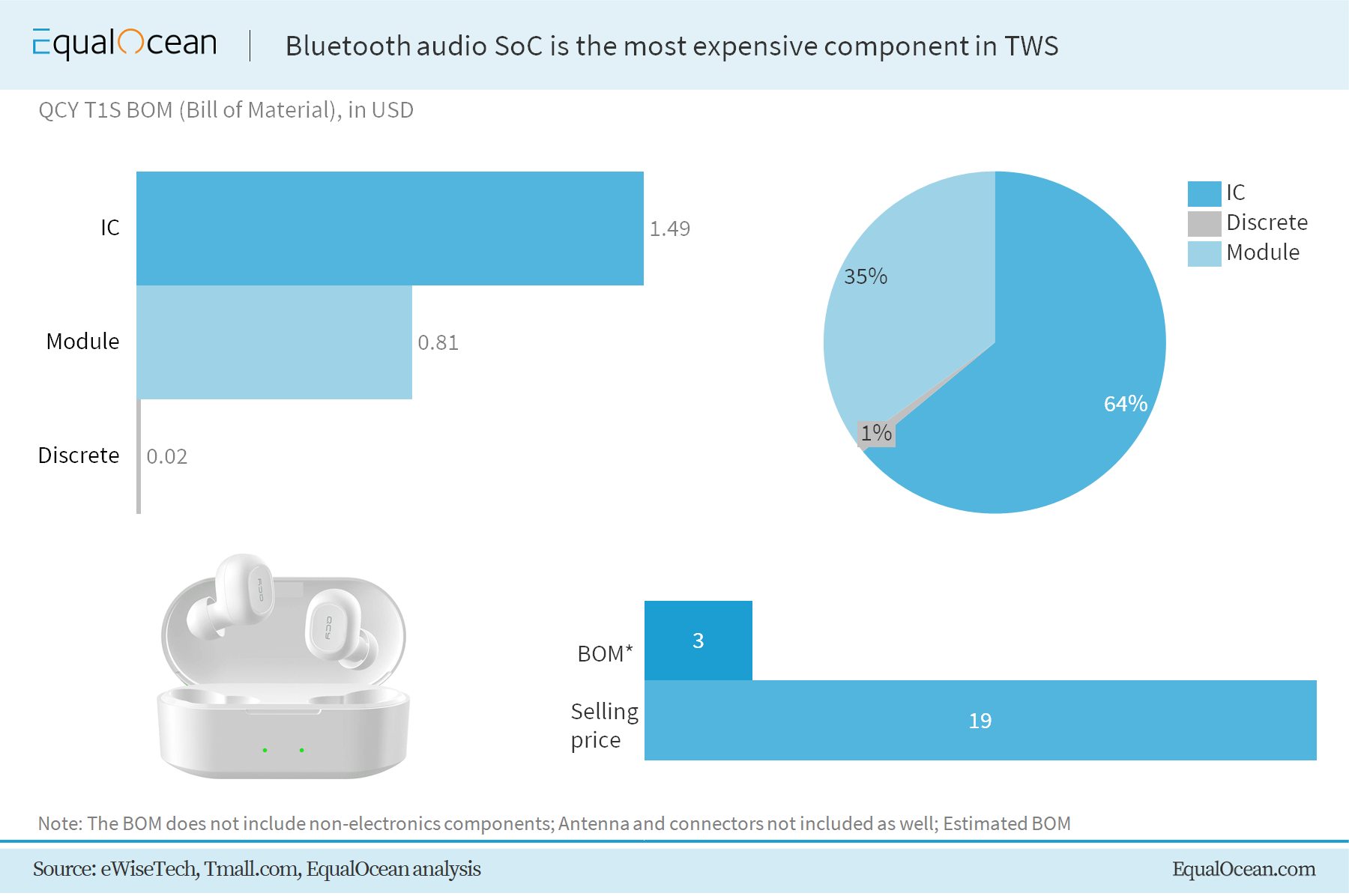 A Bluetooth chip is the most expensive component of TWS earbuds (not including the charging case). The growing demand for middle-and-low-end TWS products certainly boosts the business of Chinese domestic Bluetooth chipmakers. According to eWiseTech, one of the Chinese best-sellers – QCY’s TWS – is using the Bluetooth chip from Realtek, with the chip cost being controlled under one dollar. 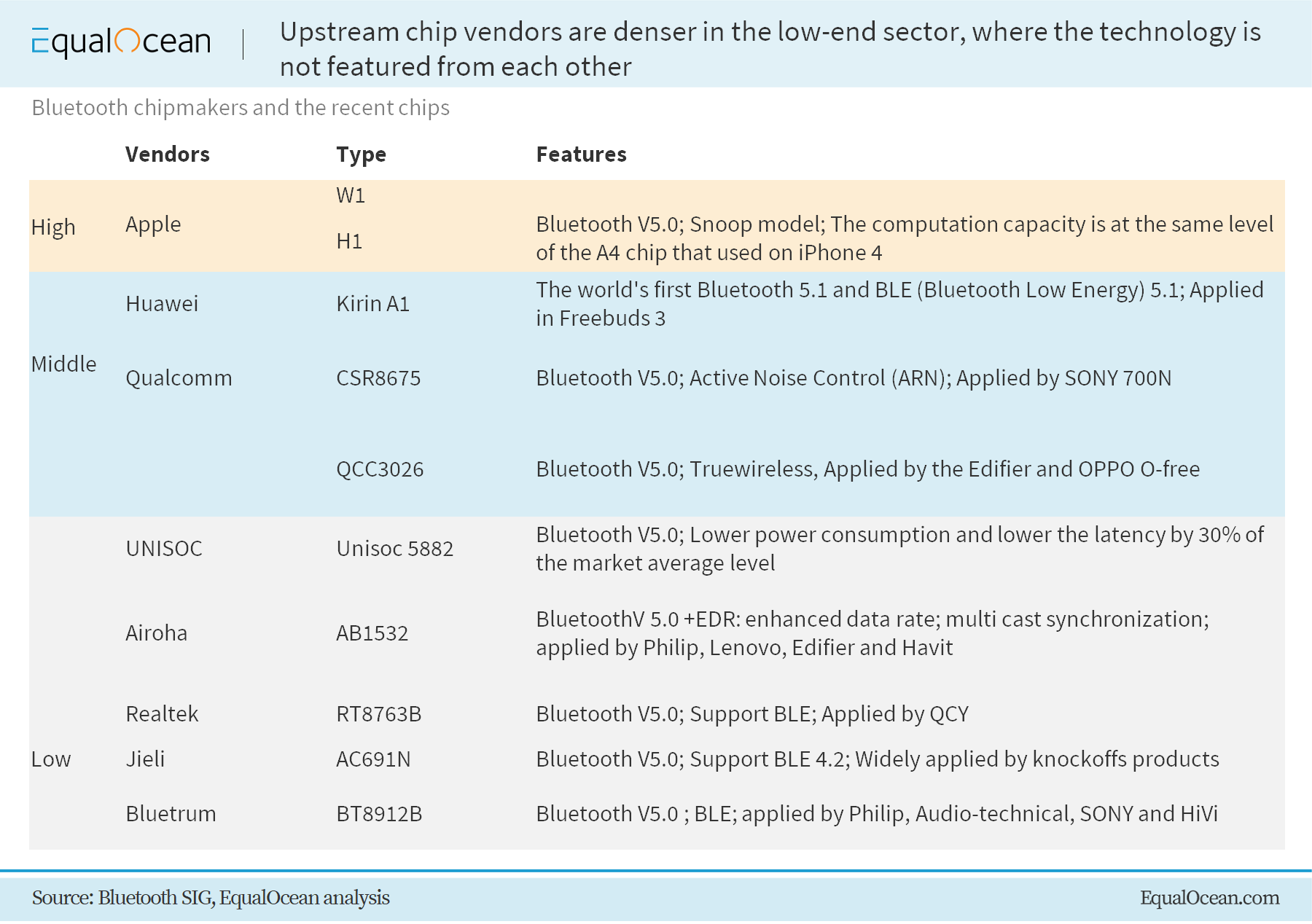 Two years after its release, the high-end segment is still dominated by the Airpods. Apple has received USD 6 million in revenue from this product, accounting for nearly 15% of the total. The technology barrier is where the price premium stands. Specifically, Apple’s patents are strong in its Airpods-related technology, especially in the realm of noise cancellation and the snooping mode that significantly reduces the latency between the right and the left earbud.

Meanwhile the other vendors who competed in the middle-and-low-end all face challenges in equalizing the power consumption and receiving time between the two earbuds. The sound quality and noise cancellation qualities are also essential.

Once one of the previously listed Bluetooth chipmakers can solve these main pain points at a competitive cost (ideally lower than USD 2) and supply a decent product with proper marketing, the chaotic TWS markets will move into the next (orderly) phase of competition. That is likely not too far – and can be expected to arrive by 2020, since Unisoc’s latest type Chunteng 5882 has reduced the latency to a level that is approaching that of the Airpods. Xiaomi’s main earbuds ecosystem company Onemore is the main customer of Unisoc's chips.

For the global trends and China’s goods and capital market performance in the TWS-related area, please check the second part of China’s TWS story.