Mindray Medical (300760:SH) is the most expensive stock in the segment of Chinese medical devices so far. Now this giant is following the domestic healthcare reform and raising the high-tech tide with organic growth. 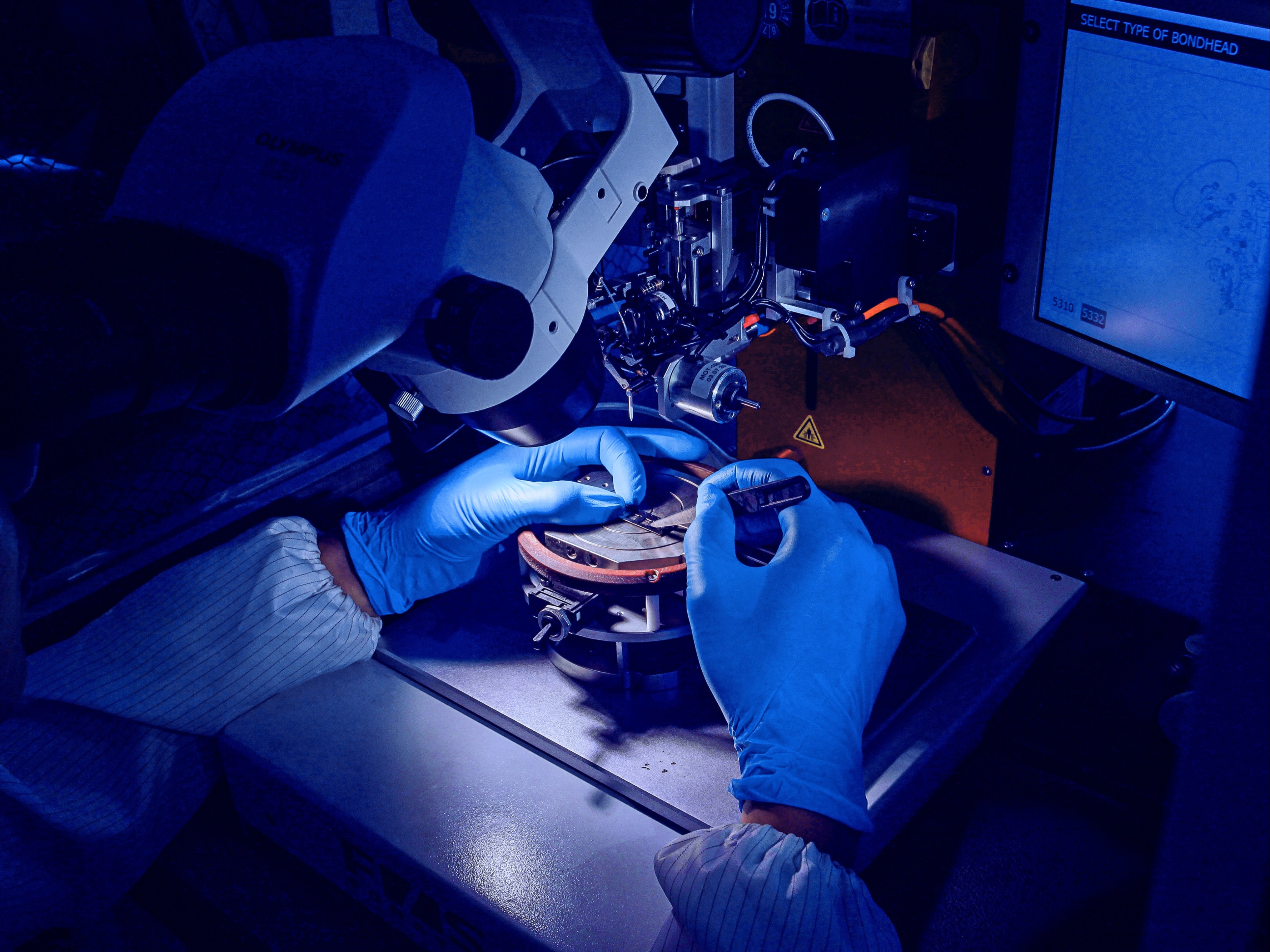 ► Mindray has a solid foundation for future growth based on market exposure to over 190 countries and regions.

► After so many years of acquisitions, it has become a more selling-driven model despite many efforts on R&D.

COVID-19, the black swan incident to end them all, has been causing pain across a broad spectrum of industries. At the same time, it raised a collective focus on healthcare and soaring demand for medical devices, especially those life auxiliary equipment items such as respirators, biochemical analyzers and color ultrasound devices.

Mindray Medical (300760:SH), as the most significant medical device provider listed on the A-market, has evolved into a thriving organism. According to the Ministry of Industry and Information Technology, this April Mindray received orders for respirators to the tune of over 10 thousand, scheduled till June.

Success in a time of worldwide medical emergency follows prolonged phases of organic growth. The year of 2019 saw the company's domestic revenue grow 20% and overseas sales break through by 10%. 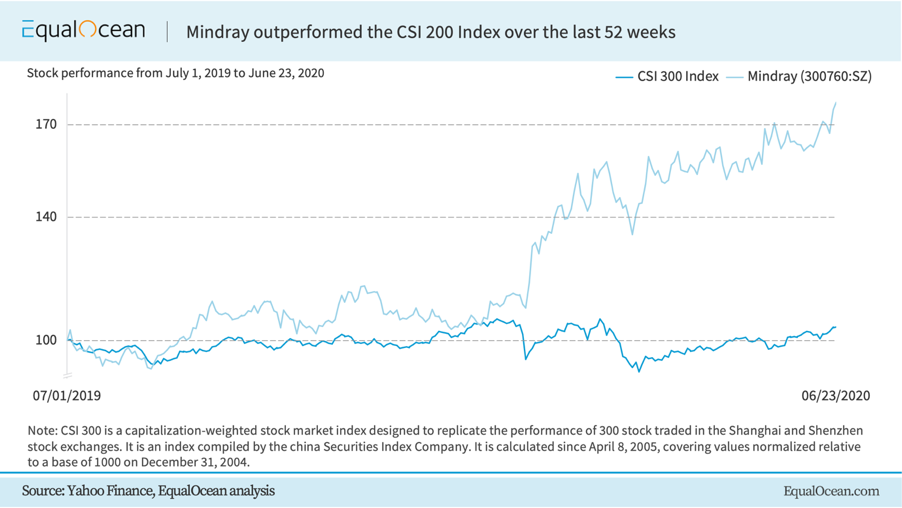 The medical device market in China has surpassed the Japanese market, becoming the second largest globally in 2018. Indeed this golden market has always been desirable to some world-class manufacturers, such as Medtronic, Johnson & Johnson and Philips.

Mindray mainly engages in the research, development and manufacturing processes of three fields: life information and support, in-vitro diagnosis (IVD) and medical imaging. Besides these, this Shenzhen-based company has expanded its product lines through a series of acquisitions, including orthopedics, endoscopy and other high-value consumable devices. 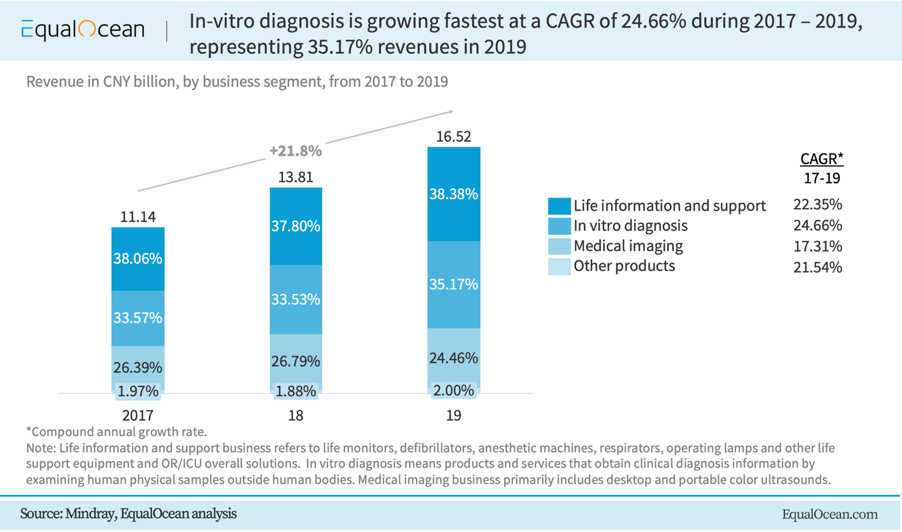 As the largest revenue source, the life information and support business includes monitors, defibrillators, anesthetic machines, respirators, operating lamps and other life support equipment. In the IVD arena, Mindray provides reagents, analyzers, calibrators and controls. In 2015, it occupied a 0.62%  global market, according to the China Association of Medical Equipment. As for medical imaging, a tech-driven field, color ultrasound devices are the core products in the spectrum of Mindray’s portfolios.

In China’s market of medical devices, one of the biggest challenges for domestic manufacturers is the competition with those big-name foreign brands. It can be taken as a general situation in all those small segments of this vast industry. The top three foreign competitors of Mindray are Philips, GE and Beckman Coulter (the US).

However, some rising domestic brands with independent R&D capabilities are fast-growing. It is essential to understand this kind of growth in a more detailed way – is Mindray flowing with a general average trend or outperforming the industry benchmark?

Many indicators can assess profitability. Here in the fundamental analysis of this medical device company, ROE (Return on Equity) can explain profitability from a more comprehensive perspective. Mindray’s ROE grew from 15% in 2014 to 27.91% in 2019, with a bottom at 10% in 2015 and a peak at 47% in 2017. 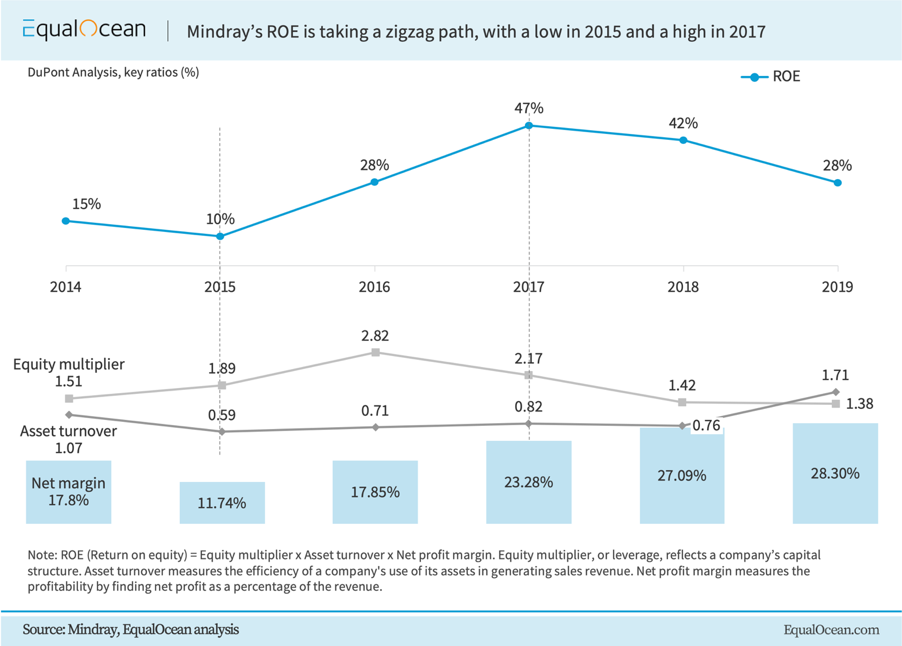 The last six years saw Mindray gain a fast growth from 2015 to 2017, indicated by its profitability increasing from 10% to 47%. From 2014 to 2016, when this company was busy leveraging debt to inject its liquidity for mergers and acquisitions, its net margin and the asset turnover ratio pulled the ROE performance down, especially in 2015. Into 2017, the ROE started to decrease mainly due to a fall in leverage, despite a stable increase in asset turnover and net margins.

From this history, it seems that the equity multiplier and the net margin are the two drivers determining the return on equity. However, for a manufacturer, it is not common to see the profitability with sudden jumps and falls. When considering the varying equity multiplier and its previous annual reports, it is not hard to explain the volatile changes in Mindray's merger and acquisitions.

It is commonly acknowledged that the acquisition is typical in the medical device arena. The rationales behind this strategy are costly R&D investment and a high entry threshold. Mindray has been playing this strategy since 2008 – the time when the financial crisis broke out. Seven years later, it acquired 12 companies, including three foreign companies and nine domestic ones.

One prominent result is that Mindray has deployed subsidiaries in 32 countries in North America, Europe, Africa, Asia and Latin America and managed over 7,600 employees globally, including over 20% of researchers.

Another direct impact brought by this M&A expansion strategy intertwined with high leverage is unusually high goodwill. Since 2014, the goodwill value has been over CNY 1.3 billion and accrued increasing impairment loss. 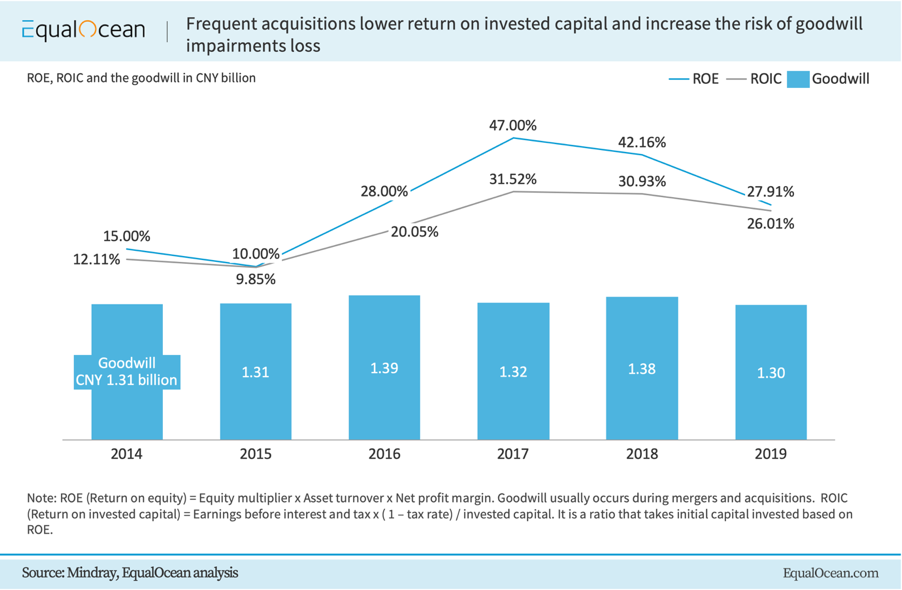 From 2014 to 2019, Mindray demonstrated strong internal-driven growth in its profitability, indicated by the five-year CAGR of net margin 9.725 and its growth margin of 0.56%.

Undoubtedly, inorganic growth has played a considerable role in Mindray’s development path over all these years. On the other hand, from the perspective of endogenous growth, it is vital to have a more precise understanding of the critical growth driver. Only in this way can we assess how far away the ceiling and sustainability are.

As a conglomerate giant in the medical device arena, Mindray has largely strengthened its distribution arms through global acquisitions and regional cooperation. Typically, there are two sales modes: direct selling and distribution. Mindray adopts selling models according to the market environment and the quality of distribution resources.

The US market mainly utilizes direct selling mode to reach end-users by tendering bids and business negotiations with all-tier medical institutions, including private clinics, hospitals, pharmaceutical corporations, Group Purchase Organizations (GPOs), etc. However, on the domestic market and other developing countries' markets, a mixed strategy with an anchor on distribution is used to cover all kinds of end-users more efficiently. The brand has to gain more recognition among the company's distributors globally, indicated by the upward brand efficacy line below. 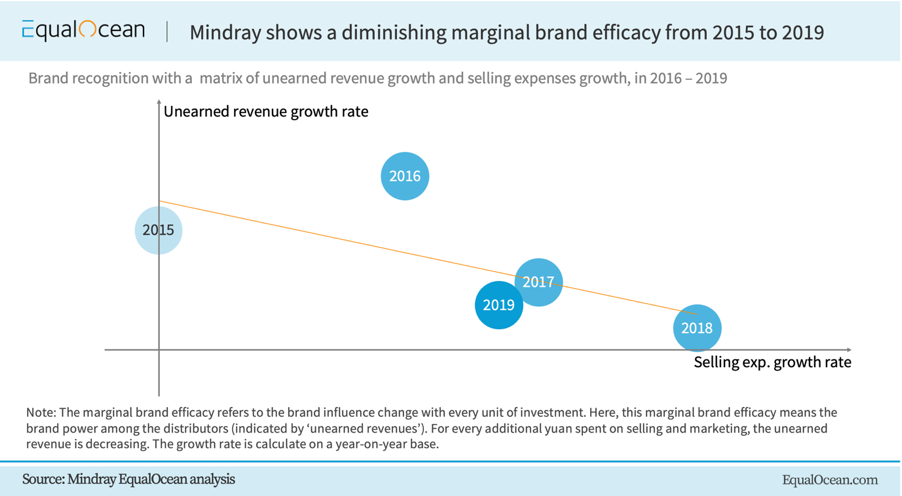 Meanwhile, this company has anchored more resources in the R&D process to cement its core competency. During the last six years, the company saw a five-year CAGR of 11.8% in R&D investment and a similar 11.58% CAGR in selling expenses. However, when it comes to comparing the expenditure efficiency to create revenue, the R&D conversion (revenue / R&D expenses) shows a slightly better six-year performance with a 4.37% CAGR, compared to 4.09% CAGR in the selling expenses efficiency.

One noteworthy thing is that, although the R&D efficiency was slowly improved in 2017 – 2019 at a CAGR less than 1%, it still reached a new historical high of 9.04% in 2019. This implies that the intellectual synergies in the R&D area by global acquisitions of advanced technologies have started to work.

Indeed, the values created by R&D are considerable. However, in a comparative look at  growth speed, this medical device seems to be and will remain more sales-driven than R&D-driven, at least for the ensuing few years.

We can assume that these companies will continue their heavy investment in R&D, regardless of expenses or capitalization. This will maintain the current sales models in all the involved markets. Considering the three-year CAGR of revenues, R&D investment and selling expenses, calculated as 21.76%, 20.75% and 14.99%, we expect growth rates of 22%, 20% and 15% for its revenue, R&D investment and selling expenses. In 2023, it is still likely to see a more powerful selling engine at 6.09% than R&D motor at 4.37%. 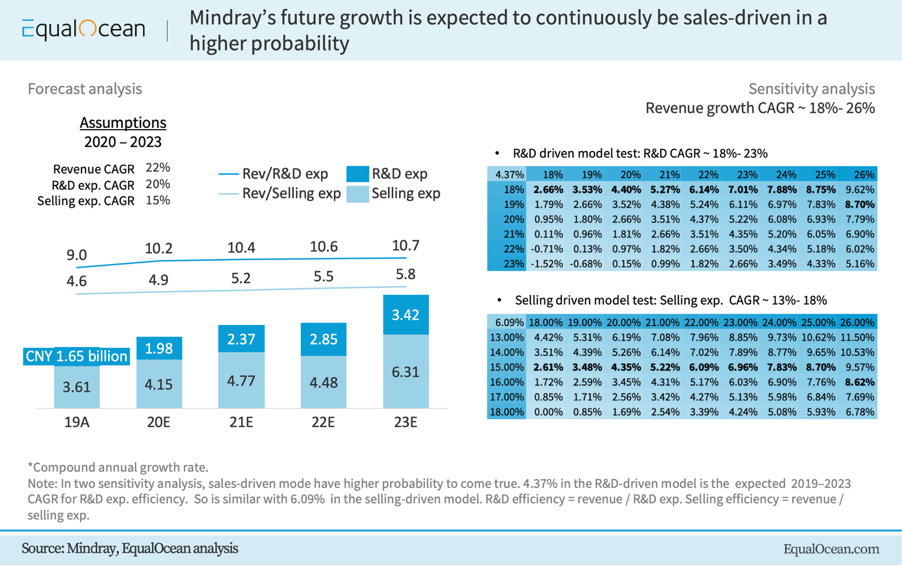 The two data tables above show that a selling-based dynamic pushes revenue faster than R&D-based mode in more probable situations.

Medical imaging is one of three primary businesses of Mindray – but so far represents the smallest revenue source. From another perspective, it has the highest growth potential. This April, this company announced it would utilize 5G technology in smart auxiliary diagnosis and digitized workflow.

For a giant medical device company like Mindray, inorganic growth is a crucial phase indicating maturity. Nevertheless, the robust technology foundation should not be neglected. It may seem that the R&D investment efficiency on revenue works more slowly right now, but it is an investment for more future possibilities.