The African continent has failed to escape from the hardships brought by COVID-19. Will Transsion, the local handset market leader, share the same fate in the post-epidemic future? 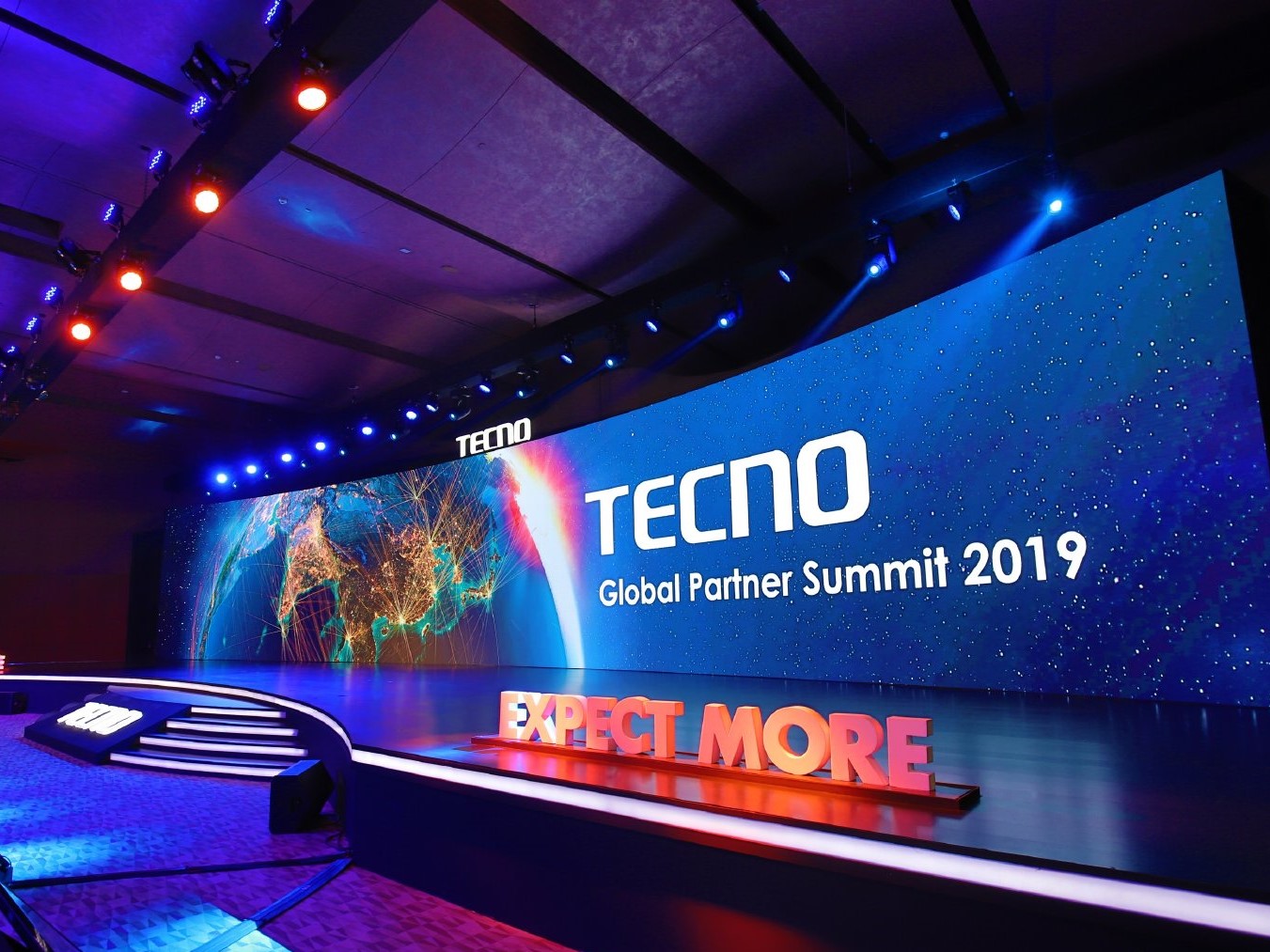 This article will touch upon Transsion’s post-epidemic strategies. For the discussion on the reasons for Transsion’s prevalence in Africa and the current threats, please check The Sunrise and ‘Moonrise’ for Transsion: Opportunities and Upcoming Threats

► To survive in the COVID-19 era, Transsion has to be more narrowly focused on economic products and become an investment powerhouse for African startups and enterprises.
► To thrive on a longer timescale and outplay up-and-coming competition, the firm needs to leverage risks through production localization, diversified revenue structure and thorough market positioning.

Explore the potential in the feature phones

Though it is reasonable to project a decline in the electronic devices market in Africa caused by COVID-19 and the subsequent trade problems and economic recession, that does not mean a destined profit downturn in such a situation. Despite people having less money in their pockets, the needs for remote communication are not likely to decrease – quite the opposite, the demand will be amplified when there are quarantine policies to be implemented. Not only do people need phones for remote communication, the government also needs devices for more efficient regulations. 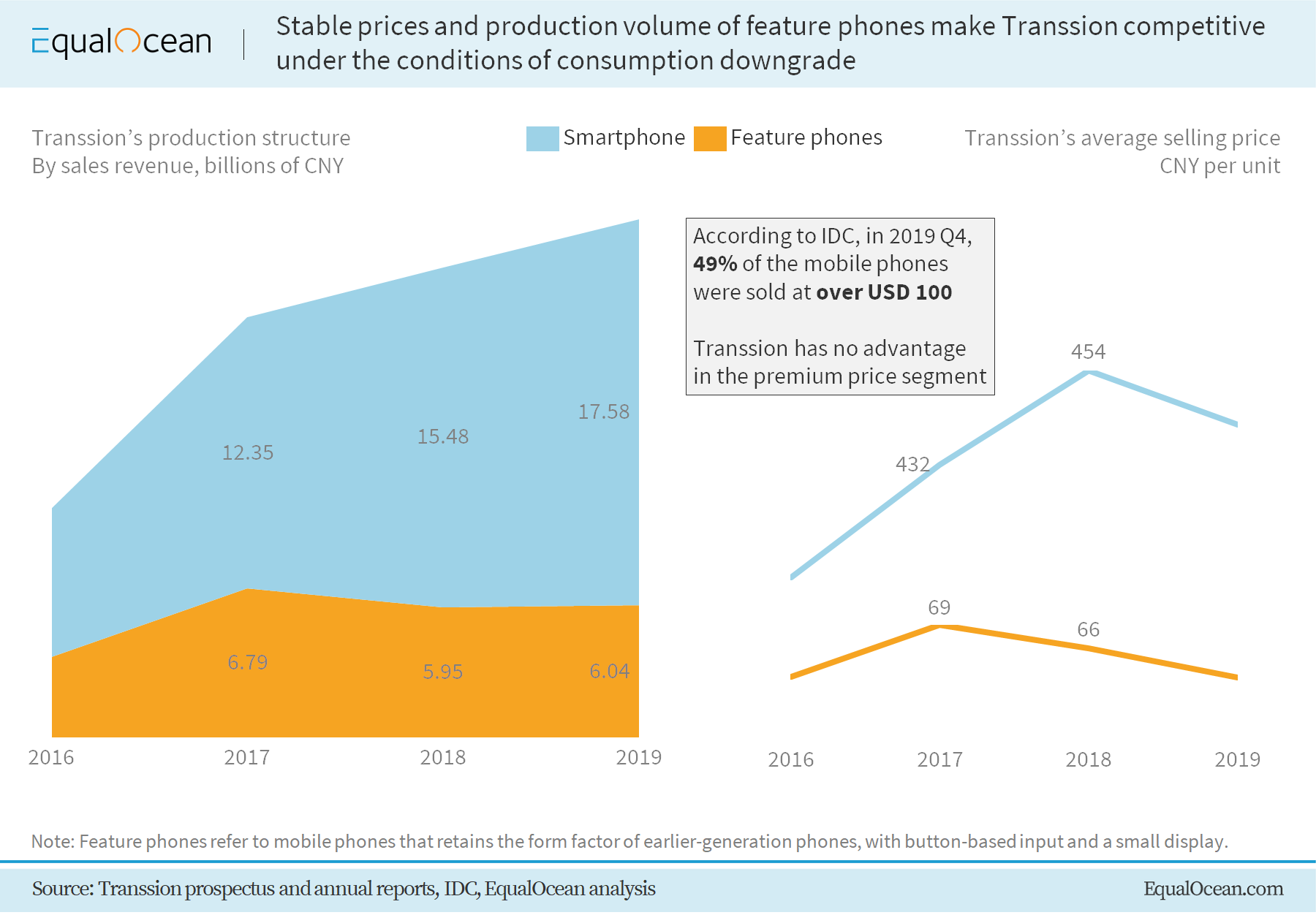 So, the problem is not about people not needing phones anymore. Rather, price is the key. Under a consumption downgrade situation, a probable wise move would be to expand the feature phones business, which could satisfy users’ basic needs and cost less. As IDC projected a 15% downslope in the African smartphone business, feature phones must be one of the best substitutes and see a growing demand. Besides the market trend, Transsion has a comparative advantage. Having spent over ten years in the African continent, the company has continuously run its feature phones business, providing a solid foundation for further expansion in terms of cost management, manufacturing and sales.

The competition will also be less intensive in the feature phone segment. Vendors like Xiaomi and OPPO, which are not currently producing feature phones, will have a relative high cost and long preparation period for entry. Besides, vendors which are not doing this now are quite likely will not choose to enter since they believe in the long term the feature phones will be replaced by smartphones. Concerns about branding is another contributor to them being unlikely to lend a hand in the feature phones. At least Xiaomi will not repeat its struggle with the low-end public image again in Africa.

Feature phones mean significantly low prices, which also contributes to an avoidance of competition. With other foreseeable competitors from China, such as Xiaomi, the technology applied in producing smartphones has already been tested in two massive markets, China and India. Besides, for those with larger amount shipments, the economy of scale gives them a low cost. It brings certain disadvantages to Transsion if it has to compete in the same price range. But if Transsion covers a lower price range that fewer vendors can cover, it stands a chance of prevailing.

As previously introduced, the phone sector accounts for 93% of Transsion’s total revenue. This revenue structure is fragile, since if some fatal changes happen in the handset area, then the company will undertake this strike for almost 100%.

Now, under the case of the pandemic-caused economic turbulence, is a good time to expand the revenue streams. Starting from making face masks and protection suites during the pandemic can be a possible way to generate cash flow and shoulder social responsibilities in the meantime. As there are a growing number of confirmed cases in Africa, many countries like South Africa and Niger are forcing people to wear face masks in public areas. A sharp demand increase is expected.

Transsion already operates a factory with local workers in Ethiopia, making it rather easy to produce masks by sharing some of the production capacity. The car manufacturer BYD is sharing the industrial areas for car production with several production lines for face masks. “BYD’s strong manufacturing facilities and creativity have enabled the firm to mass-produce quality masks in a short period of time.” For Transsion, by importing semi-finished filter layers and making finished masks in the local factory will be a safer approach.

Making sanitary-related products is not only about cash flow. It is more about looping more users in the Transsion circle, expanding the product mix along with the customer coverage.

What to do to win the future?

Though external factors contribute a large proportion of Transsion’s glory, early timing is the premise. Though there are new vendors entering into the market, Transsion should always make its first-mover advantage to the most. Well-established production lines are the ones to watch. According to the firm’s prospectus, all products sold in Africa, South and Southeast Asia, Middle East and South America count on imports from China and Ethiopia. Risks of exchange rates, policies and politics are high under the import and export model. (Cases in India are good reference points for this risk.) In addition, the increasing labor cost in China urges a shift from import to local production. By providing more employment, Transsion could eventually set thimage of an African brand which drives the continent’s growth.

Whether to use the fancy concept ‘ecosystem’ or not, every leading company in the consumer electronics segment has a diversified business portfolio. This phenomenon may be universal for other industries as today’s fast changing needs and interlaced connections of users.

Huawei’s consumer business accounts for 54% of its total revenue, and other parts are for enterprise and carrier business. Xiaomi credits 60% of the total revenue to the smartphone and 30% for its lifestyle products. Samsung has business units comprising consumer electronics, IT & mobile communications, device solutions and display panels. Each segment has over 20% leverage on the total revenue. 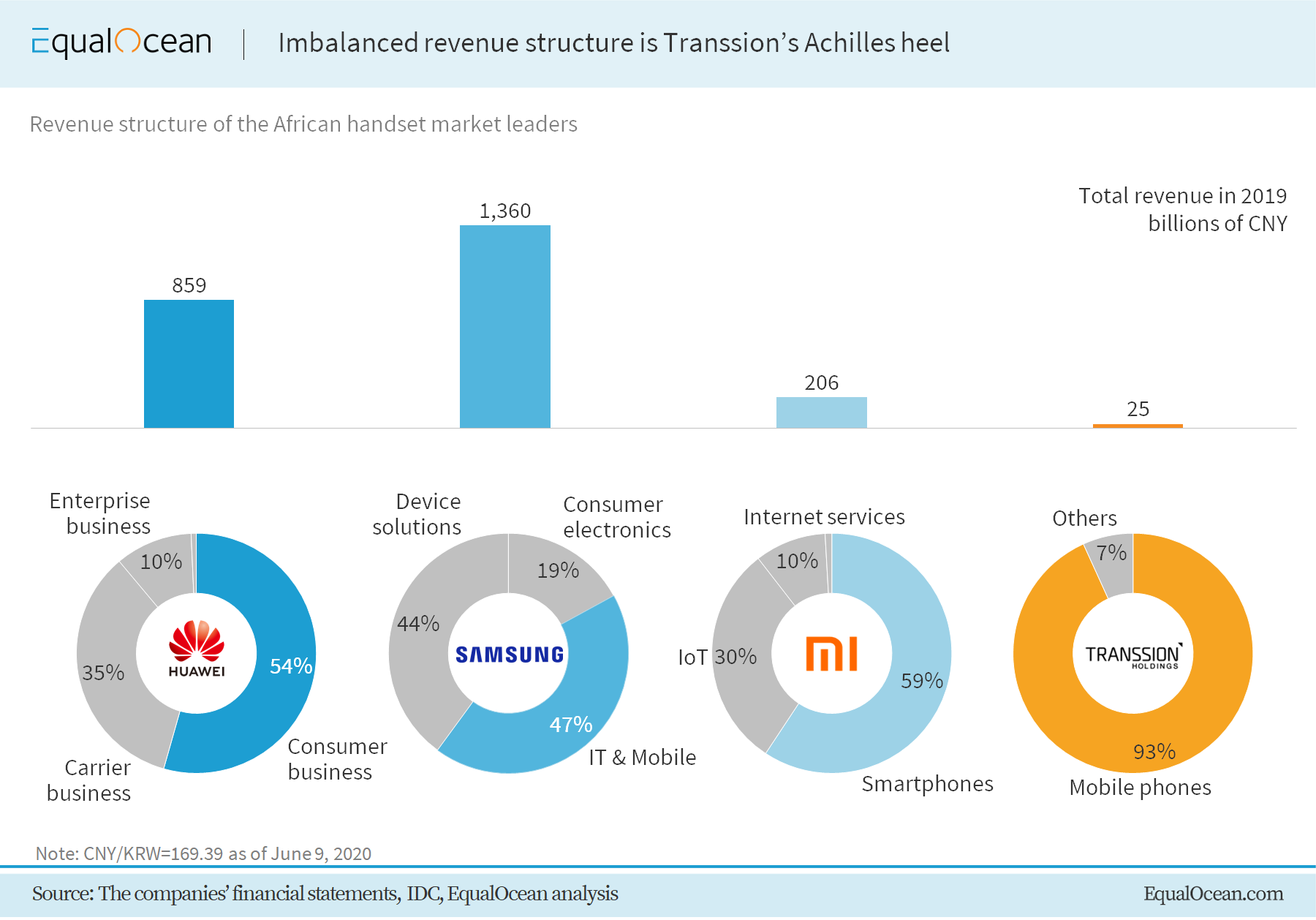 It is almost a certain that, if Transsion has the ambition to grow into an industry leader, the product territory needs to expand, for branding and corporate management as well. Notably, the firm has taken the advantage of its large user base and developed its Internet service business. Music platform Bloomplay, news app Scooper and short video app Vskit are all the firm’s budding value-added services to its phone business. This kind of Internet service strategy resembles Xiaomi’s model a lot, however Xiaomi does not seem to benefit much (10% of the total revenue) from this sector since all Internet services face a shared challenge: how to drive cash flow and profit.

Sticking with a light asset model can be a wise choice, but being prudent in the investment on service-related business is crucial, especially in the African market, where the infrastructure and daily necessities are yet to be sufficient for most people. Product mix of electronic devices, accessories and other daily but not high-tech products should serve as entrances to a broader user base.

Investing for the long term

The volume of PE/VC deals closed by Transsion in 2019 showed a 338% year-on-year increase. Except for production-related investments, such as investing in factories and environmental protection projects, Transsion also invests heavily in financial service companies like ‘Feicheng Innovation’ and ‘Chuanyi Financial Service.’ Electronic engineering companies are in Transsion’s portfolio as well. All portfolios are Chinese companies.

Be focused – then distinguished

Success or failure for a Chinese company running an overseas business largely depends on the macro environment of the target country. The macro environment involves politics, culture, infrastructure and economics – and many more dimensions to consider.  Thus it is a comprehensive decision process when deciding where to launch a business in a new country. Transsion has been titled the ‘King of Africa'’ in terms of its mobile phone business. That is a public recognition for the firm’s success in African countries. For the long-term development, it will be wise for Transsion to identify economies which are similar to its current business domains, ones which might be suitable for Transsion-like mobile phones.

Though the African continent is much divided in terms of culture and economics, the consumer preferences and trends are similar due to recent developments in transportation, Internet communications and the shared physical features and climates to some extent. A focus on the African continent and further distinguishing Transsion brand as a true server for the continent could bring the company a rather smooth uptrend channel.

Transsion did a fair job in Nepal and Bangladesh, though it has not been that lucky in the Indian market who nods back with a deficit. It remains doubtful if the success in Nepal and Bangladesh can last, since Chinese vendors have been competing a lot around every part of Asia. A strategic reconsideration of country selection is a desideratum.

CONTACT US
Scan QR code to contact us for professional consulting services
Next article
The Sunrise and ‘Moonrise’ for Transsion: Opportunities and Upcoming Threats