Not a Choice, a Necessity: OPPO’s Strategic Endeavors in the High-End Segment

What the 5G ‘utopia,’ the Huawei ban and the COVID-19 pandemic mean for one of the most ‘traditional’ handset makers. 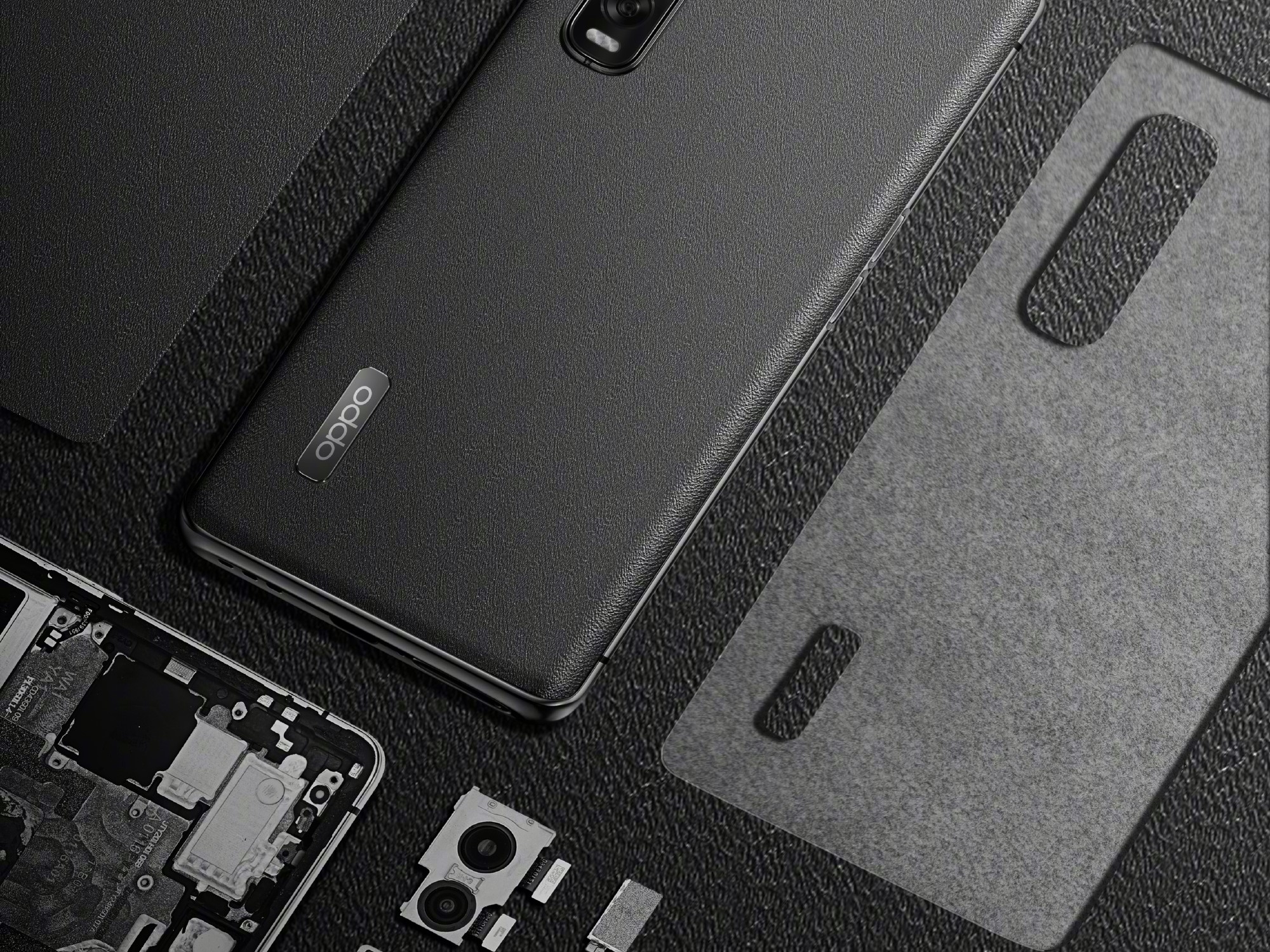 ► OPPO, as a traditional Chinese smartphone manufacturer, gained success in the new era through its integrated supply chain and retail distribution model.
► The only way out of the zero-sum price combat for OPPO is to enter the premium sector.
► The pandemic and 5G rollout are pushing the company to be more Internet-oriented.

Since global smartphone sales peaked in 2016, the market has been stagnating. Nonetheless, a handful of new hotspots have since appeared on the world map. Emerging nations, the global economy’s principal growth driver, are now presenting opportunities for both well-established electronics brands and up-and-coming mavericks in the area.

The cutthroat competition has squeezed many former leaders out of the field as well, fully or partly. Several major handset vendors have started alternative projects, reallocating active capital to other business fields. Take, for instance, Apple (AAPL:NASDAQ), which is now aggressively betting on a duo of nascent elements in its operating income structure – wearables and services. Due to the Cupertino giant’s quest for new money-generating engines, its iPhone-associated revenue in the third quarter of the last year was, for the first time since 2012, below 50%.

In the meantime, Chinese manufacturers that have received ‘hands-on training’ during the so-called ‘consumption upgrade’ domestically are very much at home with the evolving demand patterns in other developing markets, too. Huawei and Xiaomi are prime examples here. Both of them have vast business menus beyond mobile devices, however: Huawei is a 5G equipment giant, while Xiaomi is a famous producer of appliances.

Much like its younger clone – vivo – OPPO is more of a ‘pure’ smartphone maker. This is the line the firm has been sticking to since 2011 when it launched OPPO Find X903, its first mass-market mobile device. Before that, it had been manufacturing other types of electronic production, including DVD players. Both OPPO and vivo have mushroomed from BBK Electronics, a mysterious Guangzhou-headquartered company that was registered in 1995 and has grown into one of the largest private entities in the global consumer electronics sphere.

BBK Electronics and its heritage

In the early stage, the trio inherited BBK business resources and supply channels to outrun competitors in the market. In 2001, the CEO of OPPO, Yongming Chen, bought out the other two companies’ shares in OPPO and consequently made it an independent brand. 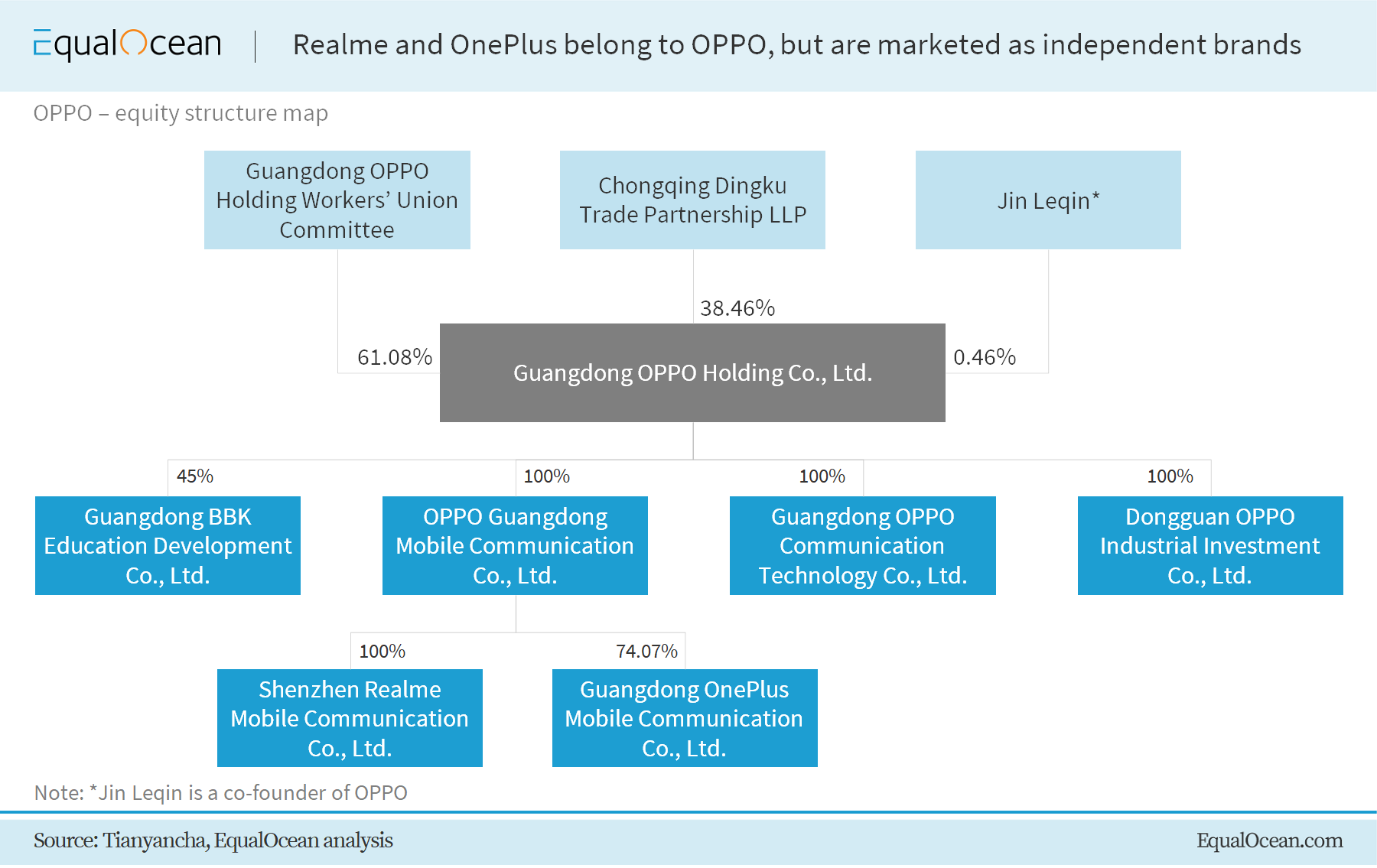 Though focused on middle-and-low-end smartphones, without aggressive pricing, OPPO and vivo both maintained a comparatively high profit margin, which is credited to their supply chain management and sales approach. While its main competitor Xiaomi claims to be an Internet company, OPPO, which has been derived from a factory-like enterprise, is more of a traditional smartphone manufacturer and retailer.

Xiaomi has been running an asset-light model without processing any factories in China. (Models are different for overseas because of transportation and tariffs.) OPPO, by contrast, manages its supply chain by integrating upstream companies under its brand. First it owns several factories, where workers there are internal employees. For CPU and other core components suppliers which the company cannot merge in the short term, more profit sharing is how the company ensured a reliable and efficient supply. For instance, excessive orders are made for flagships. This is beneficial for both suppliers to reduce cost and for customers to have less ‘sold-out’ embarrassment. Besides, there will be less dependence on suppliers in terms of product innovation. From 2018, OPPO has been the third-biggest patent holder by quantity in China according to National Intellectual Property Administration. In short, OPPO runs a rather self-sufficient supply chain model.

Marketing and sales methods also identify OPPO as a traditional enterprise. Tradition does not equal to being out of date – instead, classical ways have been proven effective, especially in China’s multi-layer social structure. OPPO, as well as vivo who runs over 250 thousand sales outlets, is betting on the retail distribution model. This model shows more efficiency in China’s tier 3 and 4 cities for lower rental cost and more precise distribution. For people living in tier 3 and 4 cities who might not care so much about fashions or tech trends, if a brand can melt into people’s lives through more offline marketing activities and a large number of offline stores, then the huge shipment figures won’t be a mystery.

Competitions in China and abroad

China’s smartphone market witnessed a game changing from 2015. Back then Xiaomi was the largest in shipments. However, over the following years, Huawei led China’s smartphone and secured a dominant place. Though OV struggled with the shipment and showed a downturn, they two managed to remain in the top three. 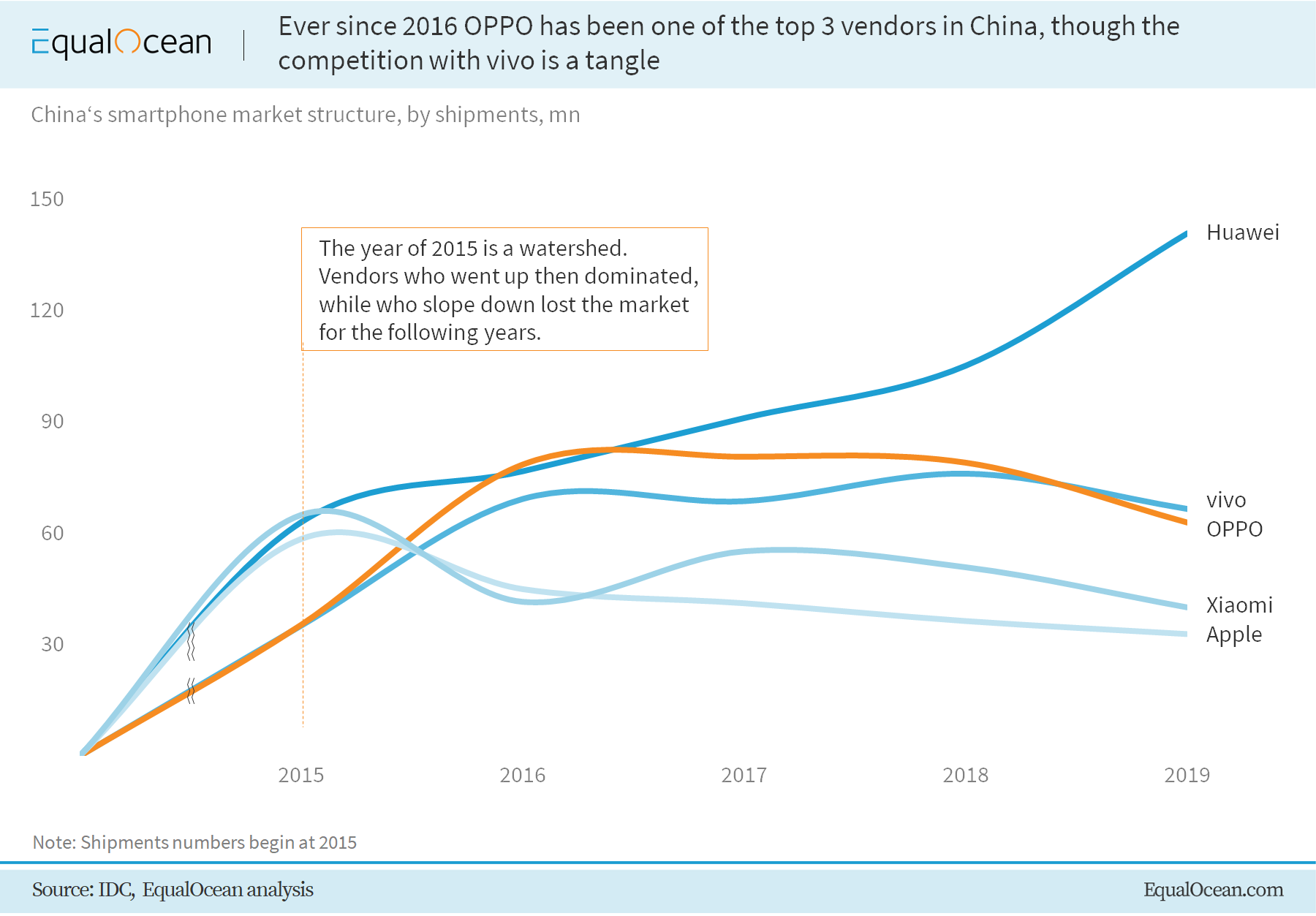 Huawei outplayed Apple in China’s premium segment, which left OPPO, vivo and Xiaomi competing intensely in the middle-to-low-end segment. To alleviate competition pressure in China’s stagnating market, these brands entered the emerging markets one after another.

On a global scale, OPPO has achieved stability in shipments. If taking the sub-brands realme and OnePlus into account, the shipments will possibly show a slight increase for the recent three years. Though no leaps can be detected on a global scale, certain performances in several countries are worth noting. In Egypt, the company made progressed from an 8.7% market share in 2018 to 22.3% market share in the following year as the second largest vendor. In Indonesia and India, if adding sub-brands into the company’s overall shipments, it gained and will probably maintain a top 2 position. 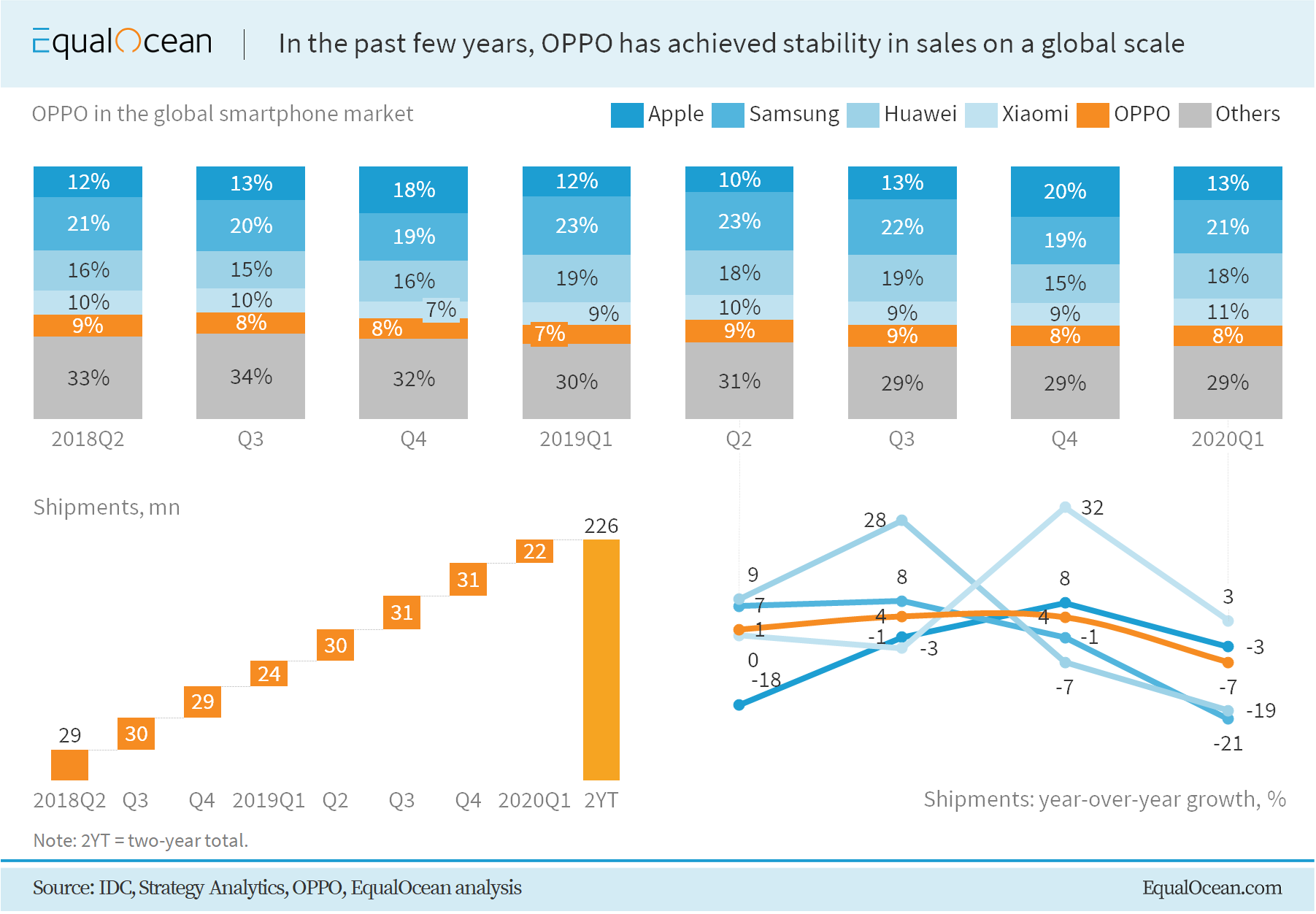 A mutual risk for all the best players in the emerging markets, is that although their overseas markets performed well and drove the revenue up for recent years, the ‘new market dividend’ won’t last forever. The Indian market has already shown a stagnation like China in 2017. In the long term, unreplaceable technology along with wise market strategy is the only way to last. 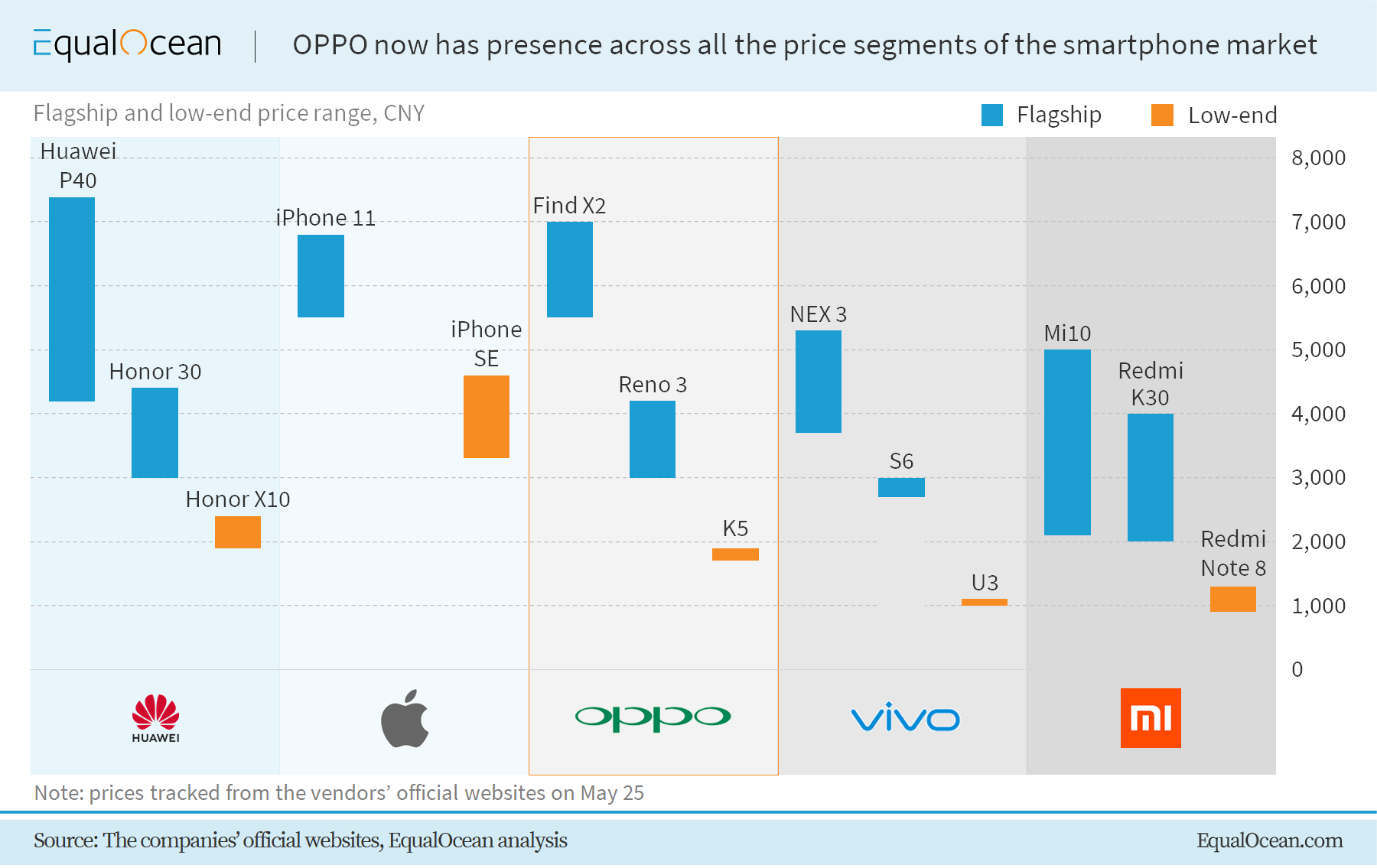 If the main vendors constrict themselves in the price range of 3,000 to 5,000, the key point of their work will be cost reduction rather than betterments and innovations. This situation does no good to anyone in the game. For OPPO, the only way out of this zero-sum price combat is to drive its price, along with products, to the high-end segment.

Since the strategy is rather clear, what remains unsure for OPPO is how to upgrade itself to the premium. In 2020, with 5G coming to the stage, communication equipment has to upgrade, actively or passively. A quite similar situation was in 2015, when domestic smartphone brands took over most of the market share because of the lower price for equal quality. Thus, here it is reasonable to infer that changes in 2020 will also be related with price and quality. With strong R&D outcomes (proved by the number of patents), the company is destined to align with higher standards for both quality and price. 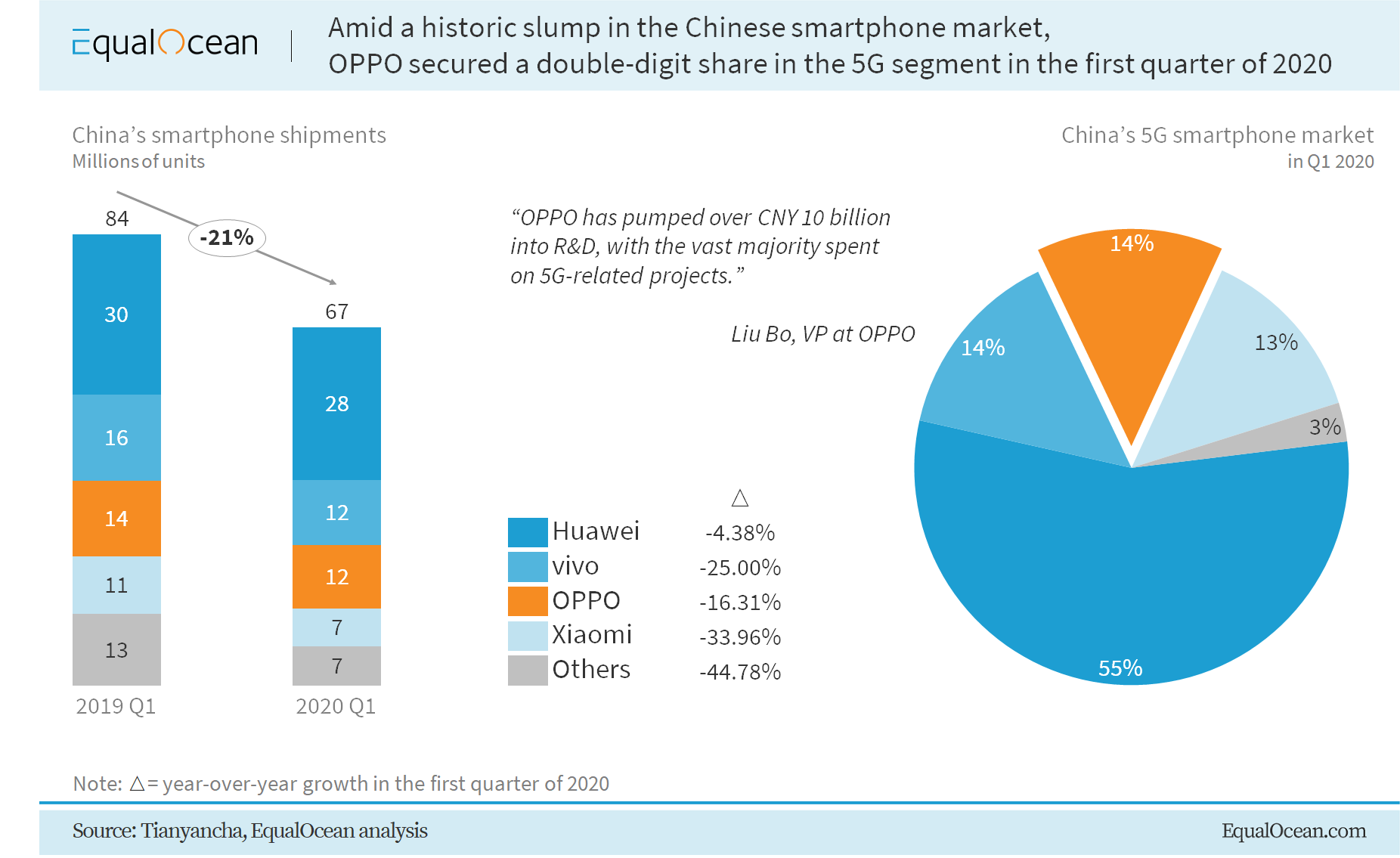 Due to a few well-known events, Huawei has been forced to move its strategic focus from overseas markets, especially Europe and the America, back to China’s mainland, for the second half year of 2020. The shift for Huawei brings opportunities for less politically sensitive vendors like OPPO and Xiaomi to expand in Western Europe and easily take the market share of price-conscious customers. For the premium sector in Western Europe, it won’t be that easy to gain from Huawei’s pain since top players like Apple and Samsung are still dominating. However, Apple showed an apparent lag in 5G-related upgrades for smartphones, then OPPO could possibly take some of Huawei and Apple’s share with 5G enabled smartphones in the high-end.

Except for potential overseas opportunities brought by Huawei’s issue, another force that is pushing the company abroad is the lack of competitiveness domestically. If Huawei puts much effort into China, for instance resorting to radical ‘on sale’ activities, OPPO and other vendors do not stand a chance to win since Huawei still has a leading profit margin. To prepare for Huawei’s strategic shift, a rational move to avoid confrontation is to go further abroad.

COVID-19: more time on the Internet

The pandemic has been engulfing the whole world for six months, long enough for people to adapt to the new normal – online consumption, online social activities, and online entertainment. During the quarantine, people are more likely to buy things and entertain online to reduce their chance of getting infected. This is quite unfavorable for OPPO’s traditional sales channels and is a perfect moment to ‘spend more time on the Internet.’ Sales-focused mechanisms, such as e-commerce platforms and other online promotion channels will probably become the next areas of the company’s digital marketing strategy. We also anticipate that OPPO will continue to invest lavishly in hardware R&D, developing new types of screens, cameras and other tech marvels fitting the new normal.