Topchoice Medical: Is One Hospital Chain Propping Up this Rising Listed Company?

Behind the buoyant share prices of a unique healthcare offering in China.subsidiaries’ statements has contributed a large part. 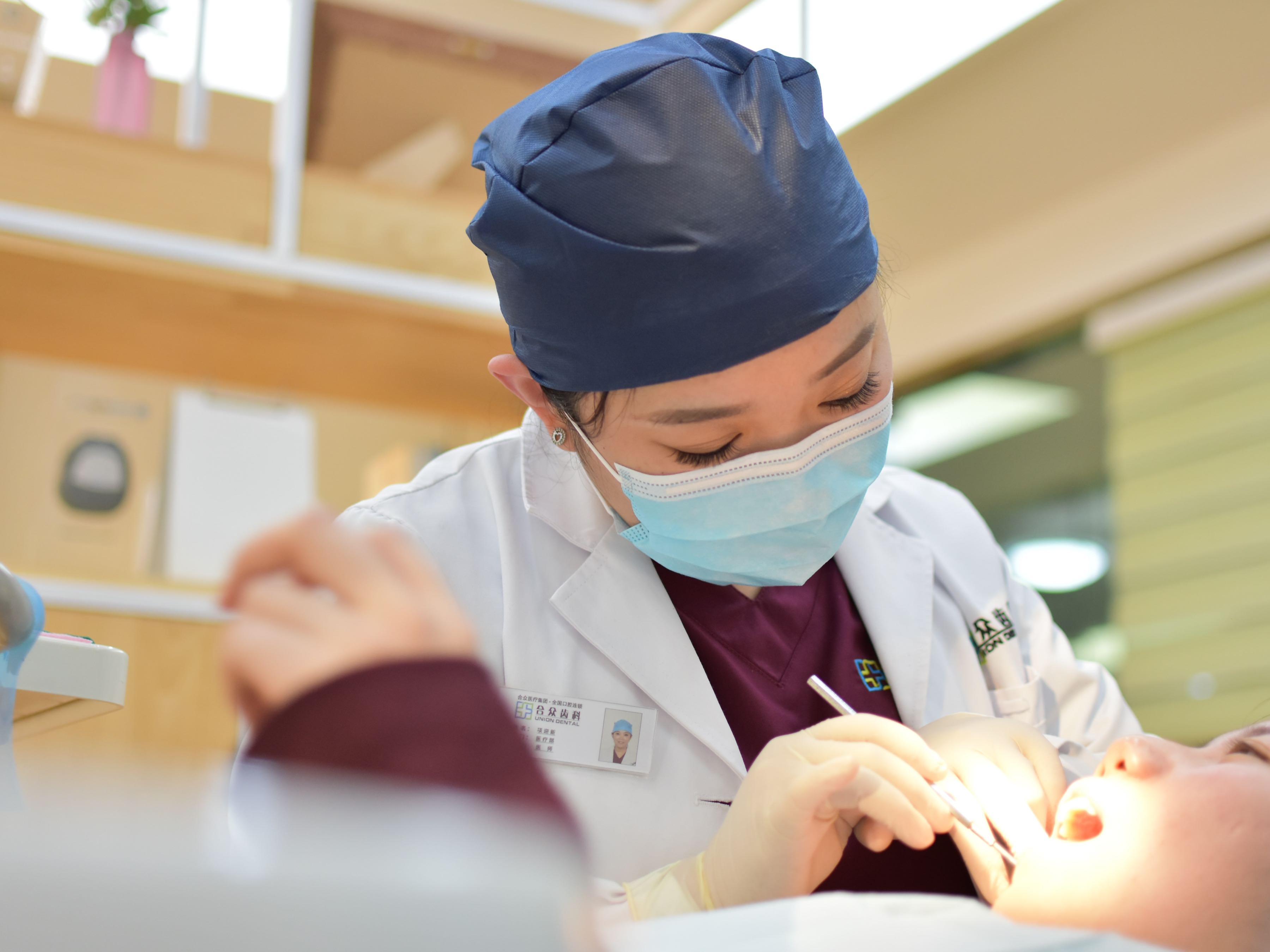 ► Although Topchoice net profit increased on a year-on-year basis, consolidating subsidiaries’ statements has contributed a large part.
► Overly concentrated income is bringing investment risks to the company, the company generated over 90% of its revenue from only one province in 2019.

Topchoice Medical (600763:SH), a Chinese dental medical chain centered on a newly acquired hospital in Hangzhou, was looked into by the Shanghai Stock Exchange after releasing its 2019 annual report. The exchange’s letter asks for explanations about the details of affiliated companies, dividends, performance, expansion outside Zhejiang province, project progress, whether there are related party transactions and whether such transactions harm the interests of investors.

After the backdoor listing in 2006, the dental giant fell into a similar situation more than once. As a company with dental medical services as its core business, Topchoice Medical is showing investors negative signs by being repeatedly questioned by the SSE.

Interestingly, having been founded in 1995, the firm once shaped the myth that stock prices had risen tenfold within five years. Many securities firms have labeled Topchoice Medical as a high-growth and high-quality company – and even a ‘leading stock’ in the medical industry. It is undeniable that the financial reports are dazzling. 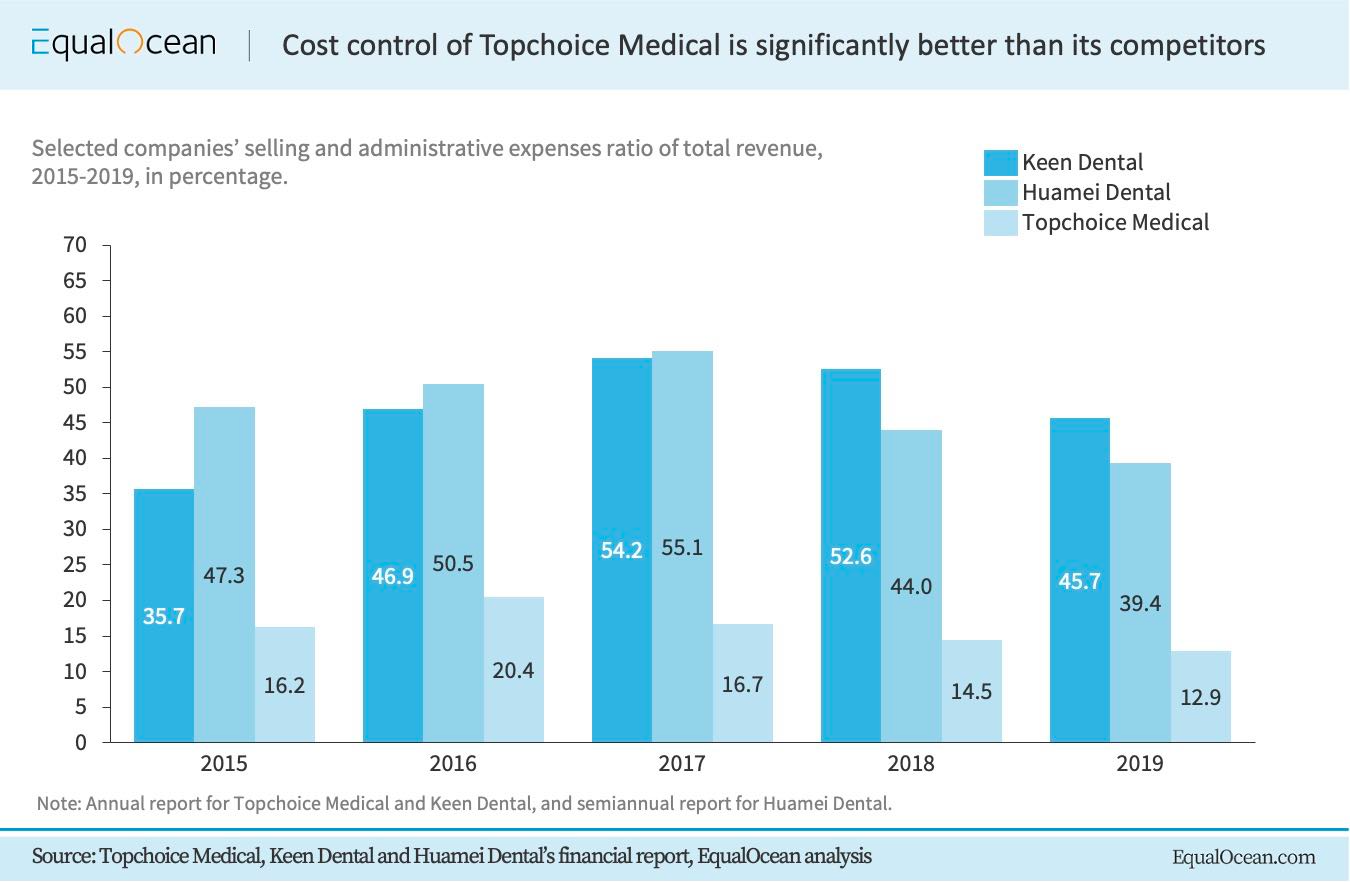 As companies that generate revenues mostly from dental medical services, Topchoice Medical, Keen Dental (830938:OC) and Huamei Dental’s (833269:OC) selling and administrative expenses ratios have varied significantly in the past five years. Starting from 2015, cost control stands out for the dental giant – with a decreasing trend. Even though the other two companies experienced drops in expenses ratios constantly in the past three years, the gross margin of the industry leader is still far ahead.

Economies of scale have contributed most. The company adopts the ‘general headquarters + branch’ model, with Hangzhou Dental Hospital as the center, and established branches in Pinghai Road, Chengxi and other regions. This reproducible strategy largely drives management and expansion costs down.

Besides, the company acquired a 100% stake of Hangzhou Dental Hospital, which has already built up a good reputation locally, greatly reducing the cost of acquiring new customers. Meanwhile, the demand for publicity and promotion is not high, resulting in a lower sales expense ratio for the company.

In terms of profit margins, benefitting from lower costs, Topchoice Medical undoubtedly manages the highest profitability, with an average rate of 22%. Although the other two witnessed an increasing trend in the net income ratio, it is still far from catching up with the dental giant.

The company with the best net profit margins, which are significantly higher than the industry average, has been criticized. According to its annual report, Topchoice Medical has invested a total of CNY 1.29 billion over the past four years, and the number of subsidiaries with more than half of the voting rights reached 54 in 2019. The explosive growth of performance in 2017 and 2018 was also mainly due to expansion and consolidated subsidiaries' statements.

Continuing to develop like this, should we define the firm as an investment company rather than as a dental institution?

In addition to its questionable investment expansion model, the excessive concentration of revenue also brings additional risks. In the 2019 annual report, as of the end of 2019, there were 32 dental hospitals nationwide. Among them, Hangzhou Dental Hospital has the highest income, with a total net profit of CNY 255 million, exceeding 55% of the total net profit and over 90% of revenues come from Zhejiang province. Unsurprisingly, gross margin is 47% in Zhejiang province whereas only 31% is outside.

It is relatively easy to generate revenues in Zhejiang Province, which ranks fourth in the country regarding GDP per capita, and even Hangzhou, which ranks first within the province. However, according to Soochow Securities, the penetration rate of dental implants in Zhejiang is 1.5%. Although the proportion of orthodontics and dental implants is still relatively low, it is still higher than the national average.

The figures indicate that the scale of dental medical services in Zhejiang is relatively saturated compared to the whole country. If the company does not gradually expand outside the province, the current situation will significantly limit the firm's development.

From another perspective, even if the company intends to expand nationwide, it is hard to say whether Hangzhou Dental Hospital, the signboard of Topchoice Medical, will retain such high value and reputation if it leaves Zhejiang Province or even Hangzhou, the capital city of Zhejiang province. If the brand effect has no advantage outside the province, then the dental business will face new obstacles and difficulties.

Moreover, in addition to public hospitals, the company in the dilemma has to seize market share with competitive private hospitals such as Keen Dental that focus on Shandong province and Huamei Dental which runs its business in Sichuan province. From this point of view, the future of Topchoice Medical may not be optimistic.

In the case that the core dental business has not yet achieved high national profitability, Topchoice Medical has also extended its tentacles to assisted reproduction and ophthalmology services.

The company signed a cooperation agreement with Kunming Maternal and Child Health Hospital in 2011 to jointly establish the Kunming Maternal and Child Health Hospital Assisted Reproductive Center and then introduced the Bonn Reproductive Center in the United Kingdom in 2012 to enter the field of assisted reproduction. However, the 2019 annual report shows revenue for this part only contributes 0.6%, with net profit not disclosed, implying that this business hasn’t brought profit in the past 9 years.

Topchoice Medical also intended to enter the ophthalmology department and transferred 20% of the equity of Zhejiang Topchoice Eye Hospital Investment Management Co., Ltd. in 2017, with self-raised funds of CNY 100 million. Although there is still a lot of room in the ophthalmology market, it is not easy to grab business from Aier Eye Hospital (300015:SZ), the giant in the eye surgery field, and other public ones.

Taken together, in terms of revenue and net profit, Topchoice Medical is indeed a giant in the field of dental, but from the perspective of investment expansion and excessive concentration of income, is the company immune to the problems it seems to be courting? Can one hospital support a whole listed company? Let time tell...