With a closing price of CNY 1312 per share  – a new record high in history – Moutai stands out from its distilling peers as a high-end luxury brand, prized as a gift and as a treat for special occasions. 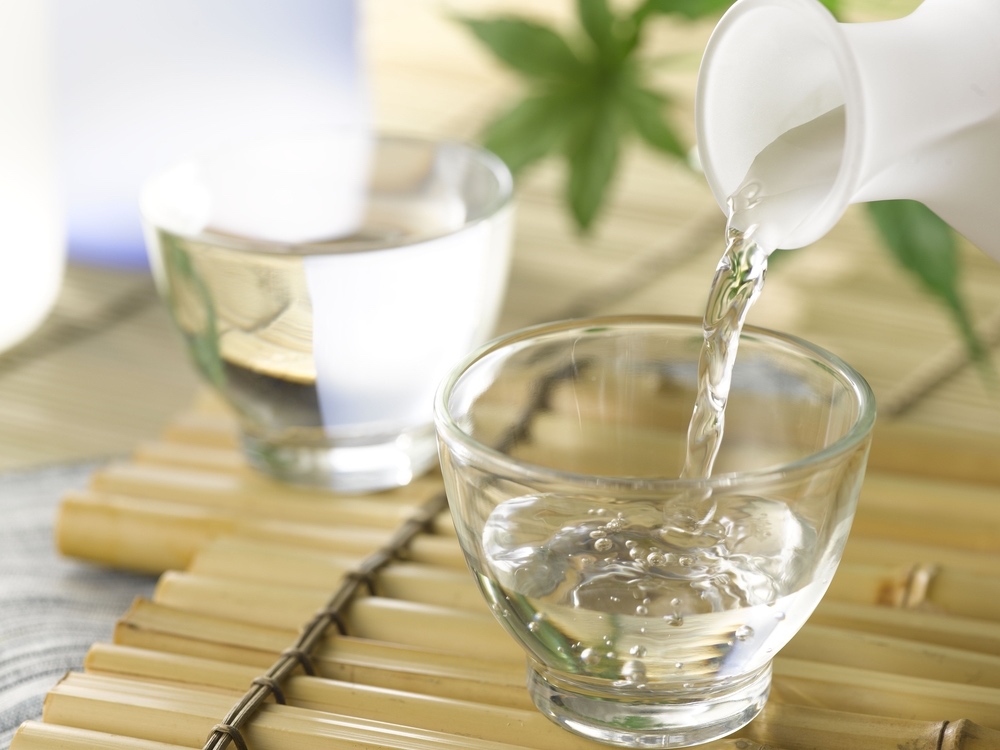 The  Chinese spirit Baijiu (literally ‘white wine’ in Chinese) has a history of over 5000 years, yet it has never been so highly valued by the market as today. Not as durable as gold or precious as a diamond, it has been tagged with a market price no lower than luxury titans like LV, Hermes and Ferrari.

Not only has it received financial recognition from the secondary market, but this ‘Kweichow’-based alcoholic brand (whose name retains the old anglicization of Guizhou province) also enjoys a global reputation. Brand Finance Global 500 published the world’s top 500 most valuable brands in January 2020, which ranks China’s Moutai 32nd at USD 39 billion, higher than Germany’s Porsche with USD 33.9 billion at 41st and Italy’s Gucci, with 17.6 billion at 99th place. 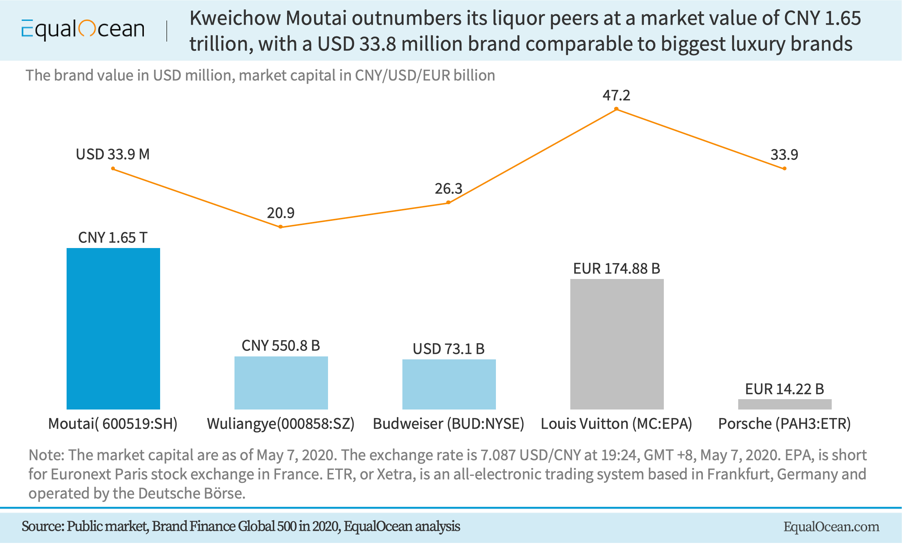 However, now that Moutai’s stock performance has come to a historical milestone, a critical point for brand and product development – and investor perspectives – has also been reached.  How to make productive and decisive moves based on this performance? The only way onwards is to review its business in a refreshed way.

Can Moutai be a ‘new’ luxury?

Luxury, in the economic sense, is defined as a good for which demand increases more than proportionally as income rises. From 2015 to 2019, Moutai’s price grew at a compound annual growth rate of 20.17%, faster than the growth rate of per capita disposable income during the same period.

There is also an economic rationale backing up investments in Chinese high-end liquor. One is to avoid currency depreciation and inflation.  These alcohols may become more valuable as time goes by. A second point relies on the mature market of wine collection, with robust demand coming from a group of classic wine collectors. Last but not least, the premium price of high-end liquors has nurtured an expanding market for Baijiu speculation. Now with the ever-high stock price of Moutai, there is more to expect from these active speculators.

Even though it is hard for the public to accept Chinese liquors as luxury brands, the financial data of these high-end groups is outperforming those luxury brands. Mao-tai’s 2019 annual report shows it kept a high average of 91.14% over the last five years. Its most aggressive competitor, Wuliangye, another Chinese liquor maker, grow its gross profit margin from 73.2% in 2015 to 79.9% in 2019.

Spirit-making is an industry that generally gives high profitability. Yet, when it comes to specific companies, their profitability may be dragged down, depending on how well they manage operations in marketing, selling and distribution. Believe it or not, Moutai has stood out from the traditional classification of alcoholic consumer goods and has been moving towards the luxury display category, with an ever-increasing stock price that keeps refreshing the market’s concepts.

At the very least, there is no doubt that Moutai is the luxury in the Chinese liquor market.

What is missing for other high-end liquor makers?

Moutai, among all its peers, is the only player that has gone this far. In the domestic high-end liquor market, Moutai occupied 61%, closely followed by Wuliangye (000858:SZ) with 28% and Luzhou Laojiao (000568:SZ) with 6% in 2018. It is a staggering disparity in terms of the market positions of Moutai and its peers since there may seem to be little difference apart from the shape of the bottles containing the transparent drink. 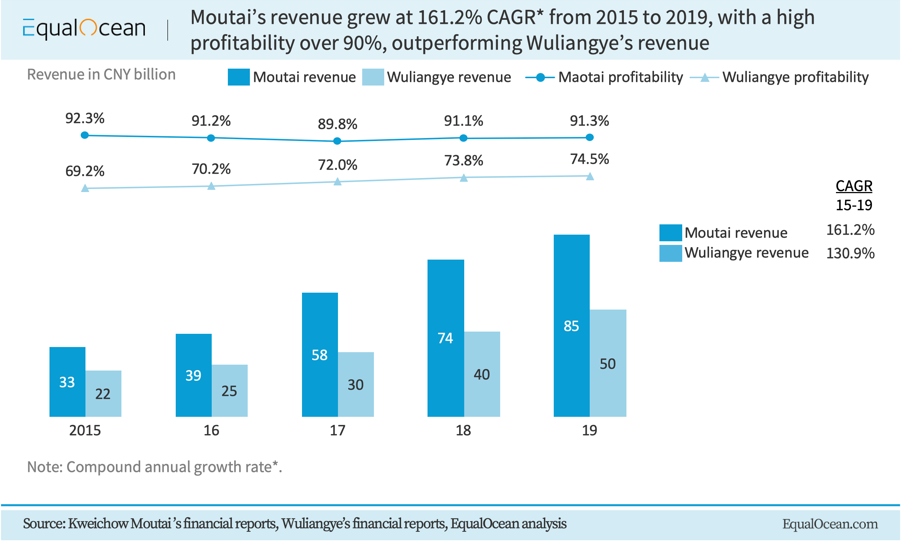 However, Moutai has withstood all the doubting voices through all these years, and has proved its absolute value to Chinese consumers. As the titan of Chinese mellow liquors, Moutai produces millions of bottles by blending from its base liquors, for which it has a sophisticated process well-known by a short-hand name, ‘12987.’ During the five-year timeline, a one-year amount of base wine needs two inputs of raw materials and will experience a ninefold high-temperature distillation sequence, eight fine handlings and seven withdrawals, a complicated program mixing machine and manual work.

Indeed, the fine art of distilling at play can partly explain the price and the value of the shared space where all other competitors can join in. But the premium and intangible value comes from the irreplaceability and rarity of Moutai’s provenance and cultural symbolism.

For connoisseurs, an authentic Moutai can only be produced in the Chishui River valley near Moutai Town in Kweichow, as the legend has it that, ‘the liquor production is inseparable with the local geography, climate and the microbial strains nurtured in the provenance.’ This uniqueness in manufacturing location has has also worked well for other wine and spirit brands. Moreover, compared to aromatic liquor, the base-liquor technique determines that mellow spirits cannot be produced at larger volumes without sacrificing quality.

For other Baijiu makers, it is challenging to make up similar provenance-related stories and even harder to implant the brand image into the consumers’ minds. Thus the market has bought into the Moutai concept, with flocks of collectors and speculators boasting of their ownership of special bottles of Moutai.

Wuliangye: a chance to turn the tables?

Wuliangye, another Chinese brand, has a wine-making history of centuries, equipped with ancient techniques remaining from over half a millennium ago. It was the pioneer in the rising market for Chinese spirits, with a nearly-double market value of Moutai in 2001. 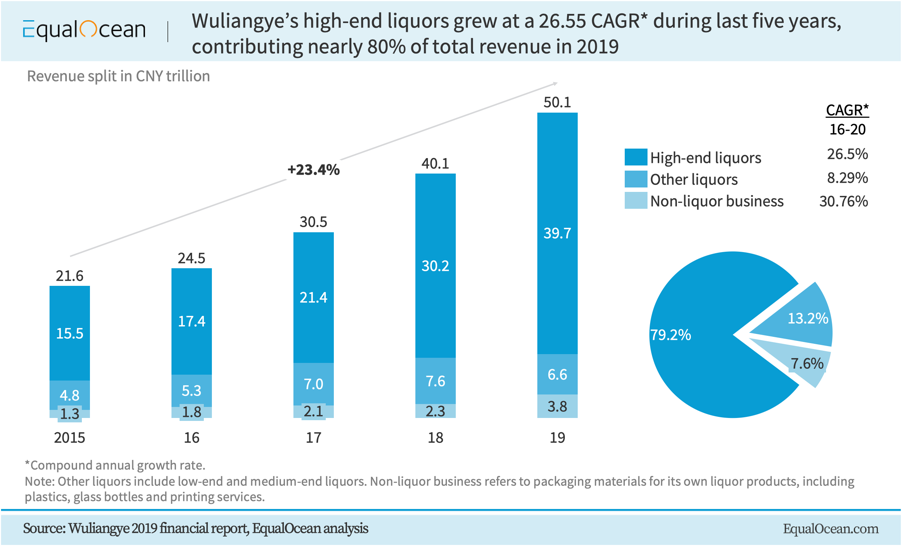 In the race to be the top brand to represent all China’s liquors on the world stage, Wuliangye and Moutai were each no more advantageous than the other for quite a long time – until one critical point when different strategies brought decisive profitability.

While Wulaingye promoted a multi-brand strategy, with over a thousand sub-brands in the low- and medium-end liquor market, Moutai has been narrowing its product portfolio to a triangle pivot, namely one world-class Moutai and three heavyweight series products. Lagging thanks  to the lower profitability of the medium-end products, Wuliangye lost the dominance in the high-end market and gave away the title of ‘Spirit of China’ to Moutai.

However, as the Moutai’s stock price seemingly touches upon the new record high, many Chinese investors are starting to question Moutai’s growth ceiling and appreciate the value in Wuliangye. In the brand recognition, Wuliangye is the second Chinese spirits brand, at a value of USD 20.87 million, according to Brand Finance Global 500.

Rarity, as the value driver for Moutai, may turn out to be a disadvantage for it in meeting the ever-expanding consumer demand for high-end liquor. Wuliangye, as the challenger brand, is the aromatic liquor giant – a particular liquor type (distinct from the ‘mellow’ types) whose fermenting/ distilling/ aging period is only one year, and whose quality largely depends on the age of pits. Wuliangye, based in Yibin city in Sichuan Province, is managing a centuries-old pit of nearly 3000 square meters.

Since receiving a national subsidy in 1958, Wuliangye has continuously built new pits and extended the liquor storage size. Up to now, it has reached a capacity of over 200 million kilograms for solid-fermentation liquor. Theoretically, those new pits will gradually be transformed into old pits, with increasingly rich microbial sediment in the pit mud. With a focus on the capacity, considering these pits will mature in 2024, all these pits will be 26-31 years old and will boast a capacity of over 40 million liters of high-end liquor.

The distribution channel is the silent battlefield where liquor makers gain profitability and an edge. Moutai has adopted a direct-selling model to get first-hand demand information from the customer end, eliminating the values dissolved along with the distribution network.

Wuliangye, on the other hand, was cooperating with significant intermediate sales for years. However, after witnessing the rising new retail opportunities and new demand, it started a ‘Hundreds of Cities and Thousands of Stores’ project in 2017, with a turnaround into a direct-selling model, aiming to reach social end consumers in various business scenarios with escalated service and upgraded shopping experiences.

It may be too early to conclude that Moutai is close to the ceiling and Wuliangye positioned behind forever – but they have changed the game of high-end Chinese liquors.

CONTACT US
Scan QR code to contact us for professional consulting services
Next article
The Future | Key Takeaways from Webinar ‘Blockchain, China’s Story’